Don't laugh. I'm about to admit that the movie The Saint captured my imagination. Look, I know it was total cheese, and I know that cold fusion is controversial and quite possibly bunkum, but that line of Elisabeth Shue's has haunted me for years: her scientist character asks us to imagine driving our cars a million miles on a gallon of seawater. I've imagined it ever since.

Well, we're one step closer to that day. But it won't be cold fusion that gets us there. It's cobalt, fuel cells, and some very determined scientists at MIT.

We've been able to split water into its component hydrogen and oxygen molecules for centuries, but as far as an energy source, it's been virtually useless. It takes energy to break things up. Clean, cheap fuel isn't going to happen when you have to use hydrocarbons to create hydrogen fuel, or when the materials that help the process along cost thousands of dollars per ounce. 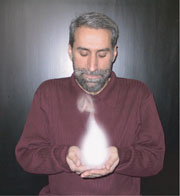 So Daniel Nocera, head of MIT's Solar Revolution Project, decided to take a cue from nature. Plants manage to split water into hydrogen and oxygen quite efficiently, using just the power of the sun. What if we could find man-made materials that could do the same thing? Nocera and his team asked.

We could end up holding the key to clean energy in our hands.

"We [have] figured out a way just using a glass of water at room temperature, under atmospheric pressure," Nocera says. "This thing [a thin film of cobalt and phosphate on an electrode] just churns away making [oxygen] from water."

Think about this for a moment. No exotic metals as catalysts. No special temperatures or pressures necessary. Just a simple little setup that could run on a beam of sunlight, giving us a fuel that could power our planet cleanly.

The possibilities are intriguing.
.

Since it is quite explosive, carrying huge tanks of hydrogen in your car would be dangerous. In theory, it would be possible to bring a jug of water instead and produce little bits of the gas on demand.

But let's not get hung up on cars. It's not just cars, but houses: should this become an economically viable technology, it would solve the problem of powering your home on a cloudy day. You'll have plenty of hydrogen stored up, to use as needed.

And what about consumer electronics? Did you ever expect your cell phone and computer could run on water? There's a good chance they someday will:

The days of fast-fading cellular phone batteries may soon be over. Researchers at the Lawrence Livermore National Laboratory (LLNL

) recently developed a working prototype for a portable fuel cell energy source that could power a cellular phone 300 percent longer than existing rechargeable batteries do. Indeed, the new technology would be less expensive, smaller and more powerful than any battery currently in use, according to Jeff Morse of LLNL's Center for Microtechnology Engineering. He predicts that it could replace standard lithium-ion and lithium-ion polymer batteries in a number of consumer electronics products, such as laptops and handheld computers.

The new power source, which runs on liquid fuels, has at its core a thin layer of electrolyte materials sandwiched between electrode materials. As control elements distribute the fuel over one electrode surface, the other receives air. Heating of the electrolyte-electrode layers stimulates the flow of protons from the fuel, sending them across the electrolyte layer to the air-breathing electrode. The protons then react with oxygen to generate electrical current. Conveniently, recharging the power source requires only a simple switch of fuel cartridges.

And where would this liquid fuel come from? You guessed it: your little electrolyzer gizmo made cheap and simple by Daniel Nocera et al.

We're closer to a future where energy is cheap, abundant, and non-polluting. The science of energy will get us there, one inspiration at a time.

Tip o' the shot glass to the Wired Science blog, which provided the inspiration for this Sunday's science. As always, click on the photos for their sources and fun, (usually) relevant additional material.
Posted by Dana Hunter at 3:13 AM

Yup. I've had this version of the Nocera story sitting in my browser the last couple of days waiting for me to take time to write about it.

I had thought to also discuss these:
Harvest solar energy at night (!)
41% efficient solar cells

If stuff like this becomes mainstream quickly enough, we just might manage to not be completely fucked.

That link about the nano-antennas has another implication - computers could become much more efficient users of power. Right now, most of the energy put into a computer is given off as heat. If it's possible to power the fans or other cooling devices (and the article implies they can) that ought to cut 10-20 percent of their power consumption. Laptops, in particular, would benefit.

Of course, there are other applications along those lines.

BTW, Dana, just wanted to let you know that even though I don't comment much on these Sunday articles, I enjoy reading them.