In the spirit of "do unto others as you would have done unto you," Steve Benen takes the NRSC's dumbfuck excuse for their fear-mongering and tries it out on the Cons:

I see. Democratic reform proposals are still taking shape, and the White House hasn't introduced formal language, so as far as the National Republican Senatorial Committee is concerned, quite literally anything is possible. Got it.

Of course, it's also worth noting that GOP leaders have promised to unveil an alternative Republican reform plan "soon." They have not put forward legislative text, and we have no idea what the Republican bill is going to look like.

With that in mind, it's entirely plausible that the Republican Party's health care agenda may require child sacrifice in some kind of cultish ritual. What's more, the GOP plan may include mandates that physicians hit patients in the face with a baseball bat. If the Republican proposals become law, it's possible that only Southerners will be allowed to call 911 in an emergency. Perhaps most alarmingly, the GOP agenda might make it illegal to go to the bathroom.

I'm not describing the details of the still-hidden Republican plans; I'm just musing on the open-ended possibilities. This isn't a definite description of what the GOP plan is, but rather, a possible scenario that the minority party might pursue.

Next time you get one of those right-wing emails trumpeting a bunch of silly lies, shoot this back at them. The NRSC says it's totally legit, after all.

In news that will come as no surprise, Bill O'Reilly's trying to weasel out of his support for the public option. Funny, he seems upset at being "taken out of context" - from his past behavior, I would've thought he'd be totally down with that.

In case you're wondering if Cons are getting any classier at town halls, rest assured they aren't. Here we have Eric Cantor telling a woman who has stomach tumors to basically fuck off and die. Well, actually, he suggested she apply for government programs she won't qualify for or get in line for charity care that will come too late due to already enormous wait lists, but it all comes down to the same thing in the end. Compassionate conservatism rides again.

Meanwhile, Sen. John Barrasso sez that undocumented immigrants getting health care services from emergency rooms is just like shoplifting. Because getting life-saving medical treatment is just like walking out with your pants stuffed full of department store merchandise.

How shitty is the bullshit being spewed by Cons? So shitty that, now that the Teabaggers have lost interest, town hallers are taking down Cons for rank stupidity. Funny what a few pointed questions and a lot of laughter can do for cooling down hot air.

In good news for health care reform, Sen. Chuck Grassley took a gun and shot the shit out of one of his own major talking points. The "nobody loves me, everybody hates me, guess I'll just go eat worms" card can only be successfully played if you haven't just admitted that everybody likes you just fine, they just didn't agree with every last demand of yours.

Yesterday, I mentioned that Humana's been scaring seniors into opposing health care reform. Today, I'm sure you'll be shocked to learn that Humana wasn't the only one - and that AHIP is having a Bonner & Ass. moment. Forged letters to the editor? For shame!

In news that's sure to delight anyone wanting to witness Baucus eating humble pie, he's being forced to make improvements to his bullshit plan. Before mark-up, no less.

Progressives are still pressing Nancy Pelosi on the public option - and for once, the alliteration isn't my fault. Lynn Woolsey and Raul Grijalva are fast becoming my favoritest Congresscritters.

And, finally, for those fixated on costs, paying for health care reform is simplicity itself: just repeal a totally useless tax break. That's right. Just one. It was an accident anyway.

There. Sorted. We can haz health care reform, nao? 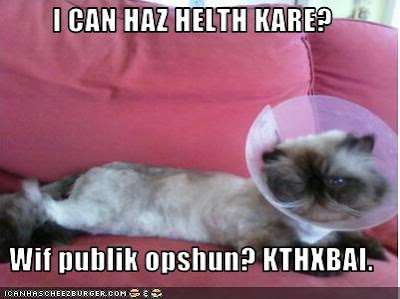