What It's All About, Really, When You Get Right Down to It

Most importantly: a profound muchos gracias to those who have volunteered to become my Wise Readers. You'll forever hold a high place in my personal pantheon. And there's still room, so by all means, volunteer if you haven't already.

Writing is one of the hardest things a person can do. It's easier when we're not going it alone. That's by way of saying, my services are available to those who need the favor returned.
It's now Night Three of my get-back-in-the-saddle attempt, and it's hard getting those feet in the stirrups. I've always been a cyclical writer - I go through months of profuse creativity, followed by many more months of wasteland. Unfortunately, the wasteland encroaches further with every passing year.
That's why I turned to blogging. On the nights when I'm singularly uninspired, when writer's block is more like writer's insurmountable obstacle, it's still simple enough to find a bit of news somewhere and riff on it. It's writing, of a sort. It's useful writing, even: I've met some incredible people, we've got the start of something brilliant in this Carnival of the Elitist Bastards, and I don't doubt I'll be doing this for the rest of my life.
But my passion and focus has always been on the fiction. Even when I'm not actively writing, I'm always thinking about it. It's pervaded every aspect of my life. Every decision I make, every book I read, every interest I have, all of them can be traced back to the series I've been working on for decades.
Bush pushed me to take my politics public, but I was studying politics long before he pissed me off, because worlds will have governments. I'm not the kind of writer who can do it half-way: I've got to understand the basis of things so that my characters live in a world that developed from their perspective, not one that's just a generic template. That's one of the reasons it's taken so long to build the universe I write in, and why the work continues. It takes a lot of effort, and you have to know a lot of things, to write this way.
Take maps. Most fantasy writers I know draw a continent or two, slap on a few mountains, squiggle a few rivers, and call it good. What do I do? I spend years studying physical geography, plate tectonics and other branches of geology, and I buy a $200 Wacom Tablet so I can draw the world in exquisite detail. Not that I've put the whole thing together yet, not by half, but I've got a really nifty island: 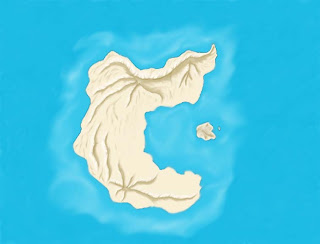 My darlings, meet Cariicedraas. Someday, I'll take you on the full tour. I know everything there is to know about its market district.

I think I've mentioned before that I've got Unicorns. I do. Only they're not called Unicorns: they're Drusavs, and they've got their own evolutionary history (of sorts), their own language, culture, philosophy, foibles, and history. One of the stories you Wise Readers will get to read is from their very ancient history, when two poets got into a war with each other, and ended up unifying the world. And it's bloody hard to write, because Drusav poetry is physical. Equines have a rich body language. It's taken a lot of thinking to extrapolate from what we understand of how horses think and speak, and determine what sentient, highly intelligent equines with a bloody great horn growing out of their foreheads would have done with that rudimentary language.

Besides, I'm not what you might call the world's greatest poet. Nahkorah and Disahnahle were. Pressure's on. At least, since their poetry was a physical language, I can put down any weakness in the poetry to something lost in translation. Useful, that.

Right now, the story I'm struggling with revolves around what it means for the immortal to give up immortality, subject themselves to repeated rounds of birth and death in service to their people. I'm aided in this by Buddhist philosophy and the concept of samsara, but it's not enough. I also have to figure out just what they mean by a "soul." I can tell you this: t'ain't what the theologians think.

Times like this do make me think I've bitten off more than I can chew. But the most important words ever spoken to me were these:

Garrett said that to me many years ago, in the fervent tones of one who believes that it's not only right and necessary to do your characters justice, but with the supreme confidence that I can.

How can I not live up to that? Even if it takes me twenty more years to make it so.

All you Wise Readers have to do is answer one question: did I do them justice? That, in the end, is what it all comes down to. That simple, and that bloody difficult.

Guess I'd best get to masticating.