What did we learn about McCain in this final debate? Good fucking luck if you're a woman in need of a life-saving abortion in a world ruled by McCain:


That's right. McCain believes that abortion due to medical necessity is "the extreme pro-abortion position."

Other than losing every woman outside of the rabidly religious variety, McCain managed to turn quite a few undecided voters Obama's way by being a snide, eye-rolling, sighing, sarcastic jerk:

Frank Luntz: Early in the debate these people thought McCain was doing better, by the end of the debate Obama seemed to finish better. Brit.

Luntz: This is a good night for Barack Obama.

Yes, indeedy. That would be Faux News's stable of undecided voters breaking handily for Obama. So far, from all that I've read, not one single person broke for McCain.

And the snap polls showed a definitive Obama win:

The CNN poll was just read on the air, surveying all debate-watchers in general. It shows 58% saying Obama won, to 31% saying McCain won. Barack Obama's personal ratings are 66% favorable to 33% unfavorable, way ahead of McCain's score of 49%-49%.

McCain's favorability rating actually went down. Strangely enough, Americans are more interested in a man who can lead over a grumpy old fart who can't even mask his contempt for his opponent and progressive Americans.

This picture, I believe, states the case with an eloquence no words can match: 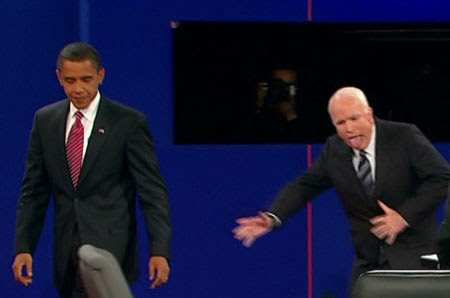 Ladies and gentlemen, one of these two men will be your next President. Choose wisely.
Posted by Dana Hunter at 1:30 AM

Email ThisBlogThis!Share to TwitterShare to FacebookShare to Pinterest
Labels: politics

It's not just McCain's stance on abortion that should give women shivers.

He's voted TWICE against requiring insurers to cover prescription birth control and refused to address why Viagra may sometimes be covered, while birth control is not (probably getting a kick-back from the little blue pill guys).

He did not support the Lilly Ledbetter Fair Pay Act, which would have extended the period of time a woman has to sue an employer for pay discrimination.

"Finds flaws with the law ensuring proportional funding for men's and women's public-school sports but notes its 'indisputable' benefits".

The CNN poll was just read on the air, surveying all debate-watchers in general. Americans are more interested in a man who can lead over a grumpy old fart who can't even mask his contempt for his opponent and progressive Americans.
------------------------------