These fucktards need a special education course in state flags:

Barack Obama gave a speech in Toledo, Ohio, the other day, and behind his podium were several American and Ohioan flags. Not exactly newsworthy stuff.

The problem is, Ohio's flag features a prominent, large "O." Obama's right-wing detractors didn't know this, and assumed that the Obama campaign had created its own flag to stand alongside the American flag. Conservative activists and talk-show hosts had a bit of a freak-out. Here's a hilarious example.

On the October 15 broadcast of his nationally syndicated radio show, Bob Grant said: "[W]hat is that flag that Obama's been standing in front of that looks like an American flag, but instead of having the field of 50 stars representing the 50 states, there's a circle?" He then said: "Is the circle the 'O' for Obama? Is that what it is?" Grant later said: "[D]id you notice Obama is not content with just having several American flags, plain old American flags with the 50 states represented by 50 stars? He has the 'O' flag. And that's what that 'O' is. That's what that 'O' is."

John Cole also noted a Townhall commenter who was outraged that Obama would "change" the American flag: "I don't want to hear any looney left comments that they are only decoration. They ARE a modification of the American flag."

Can you be this stupid and still be a real Amurkin Patreeit? Myself, I don't think so.

Since words may be a little bit difficult for these people to grasp, let's have some pictures.

This is the Ohio state flag:

It has an O on it because it's Ohio's flag.

This is Senator Barack Obama standing in front of the Ohio state flag: 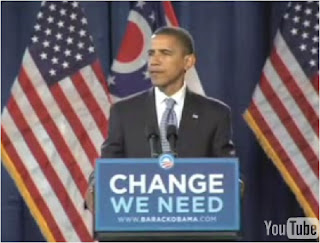 He is standing in front of the Ohio state flag because he is giving a speech in Ohio. He is honoring them by displaying their flag along with Old Glory. If you are a right-wing fucktard who is upset that the Ohio state flag is a modification of the American flag, you will have to take it up with Ohio. Obama is not responsible for what Ohio did in 1902, even though their names both start with an O.

My wife is from Ohio. Over breakfast I'll have to ask her if they're all communists over there or something...

George, I'm pretty sure cognizant dissonance doesn't explain this one. It's definitely stupidity.

*
*
*
Should The top management of the Public listed company be responsible for the company performance, eg company nearly get wind up?
*
*
http://bailoutmovie.blogspot.com/
*
*
Are you a Partisan?

Should they give their view......? If any party did not give their views, send it to their supporter to question them....
use it as a last min topics to support your supporters on this view points...

The Ohio state flag isn't a flag at all - it's a pennant, as any good poisonous nut Buckeye product of the Ohio public schools in the 1960-70s will tell you.