'Tis Samhain Eve. All Hallows Eve, for you Christians in the audience (and I know you're there because one of the smarmy variety came by to troll and is getting thoroughly trounced by my beloved heathens - my dear Catholic heart sister NP should be along soon to administer the coup de grace). Halloween ranks among my favorite holidays for two major reasons:


I'm a little too old for the loot. Besides, I learned the dangers of doing so when you're no longer knee-high to a short beaver when my ex came back traumatized from a raid on the neighborhood many years ago. He and his brother, both too young to drink and too young-at-heart to give up on traipsing the neighborhood with a sack, had decided to go as Batman and Robin. Why the taller of the two decided to be the sidekick, I'll never know. But I remember clearly the difficulties involved in finding a leotard that will fit a six-foot-two twenty-something male.

I won't paint you the entire horrifying picture, but merely sketch: it was tight. As in, form-fitting. As in, he didn't need a rolled-up sock to enhance a certain portion of his anatomy.

Out the door I sent him, and received his traumatized self back at the house a few hours later. It seems that a certain mightily drunk lady had been sitting on her porch handing out candy. Her eyes zeroed right in on his naughty bits, and she said, in the presence of all of his friends and a few random children, "My, you're the biggest superhero I've ever seen!"

He didn't go trick-or-treating the following year. I have no idea why. I'm sure receiving a Valentine of Robin swinging through the city, inscribed with "To the biggest superhero I know," from one of the witnesses that February had absolutely nothing to do with it.

So the loot is a fond memory, but the costumes are something I still enjoy tremendously. My friends and I often make a huge production out of it.

When Justin wasn't going to be at work one Halloween, we went through considerable effort the night before setting him up as the Invisible Man. We suspended a fedora from the ceiling, glasses from the fedora, and perched a stuffed suit in his chair, with detached gloves on the keyboard. I printed a Claude Raines nameplate to slide over his own. That "costume" earned guided tours from the call center manager.

We blew that out of the water a couple years later when we spent months preparing Eric to be an English gentleman in a gig. We created a horse, made the harness from scratch, and suspended it from poles from his wheelchair. The wheelchair itself got a thorough renovation, complete with a pole with a lantern. Eric decked out in a morning coat and top hat. I wish I had the pics scanned in - it was a total sensation. He tried to top that with Professor X once, but even though he went so far as to shave his head, it just didn't have the same cachet as him driving that horse-and-carriage on the grand tour through our building.

Wish he'd done that the same year my friend and I spent six hours bleaching white streaks into our hair to do Rogue.

I myself have, many a year now, done my best Captain Jack Sparrow. And you must keep in mind, this was before they sold the accessories. I had to make his ornaments from scratch. Even have the goatee with its beads. A seamstress friend made the pirate shirt. A little spirit gum, a little hair snipped from a wizard's beard, and hey presto. That costume had every Johnny Depp fan in the call center wanting to kiss me, and was even a hit with a strange female at the grocery store, who sidled up to me while I was buying (what else?) rum.

She slipped an arm around me, and said in her best seductive voice, "Hi."

I looked into her eyes, and grinned.

She paused. Her arm stiffened. She took a good look at the facial structure beneath the beard, stammered "I'm sorry!" and fled.

How I love Halloween.

This Samhain Eve, I shall be attending the Rocky Horror Picture Show, dressed as Neil Gaiman's Death. She's a cute perky Gothic chick whom you see twice in your life: once when you're born, and once when you die. When I walked into my friend's dorm room, his previously absent roommate turned around and exclaimed, in all seriousness, "Hey - haven't I seen you somewhere before?"

That's why I love this holiday. So many opportunities to play, for just one night be someone we'd like to be, a figment, a fantasy. So many chances for unintentional hilarity. And when else would you see Captain Jack and Brian do the Peanut Butter Jelly Dance? 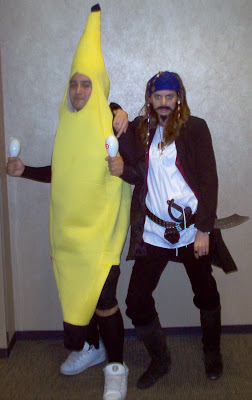 Revel, my darlings, and return to tell the tales.

(Tip o' the shot glass to Woozle once again, who created that brilliant LOL Pirate pic at the head of this post. It is made of awesome!)
Posted by Dana Hunter at 3:48 AM