AZ GOP on the Ropes

Republicon rule in my home state could be coming to a messy end.

Via Scout Finch at Daily Kos, I learn that Arizona 'cons are trying to con voters into believing they're not Republicons:

Is Green the new red?

In the most hotly contested legislative race in the state, the Green Party candidate was a Republican until four days before she filed to run for a House seat in the northwest Valley.

In a competitive Tempe race, two candidates attempted to get on the ballot as Greens but failed. One candidate had re-registered from Republican to Green the same day he filed to run, elections records show.

Democrats smell a rat. They say the Greens, newly empowered as a recognized party with ballot status in Arizona, are being used as a stalking horse for Republicans. The theory: Green candidates could siphon enough votes from Democrats to help Republicans win.

The state's Green Party has a similar take, which is why it opposes two candidates running as Greens: Margarite Dale in District 10 and Jack Kretzer in Yuma's District 24. Neither adheres to some of the party's key principles, said Angel Torres, co-chairman of the Arizona Green Party.

I'm not sure how much of this is deliberate Republicon effort to siphon votes, and how much of it is just politicians realizing that having an R after their name is like chugging toxic waste. Seems to me they're trying to deceive voters by putting on the sheep's clothing. "What, me a Republicon? Never!"

We've seen these stupid Republicon tricks in Washington state, where Dino Rossi's so ashamed of his party and so afraid voters will torpedo him that he's plumped for a mealy-mouthed euphemism, hoping no one will read "Prefers GOP Party" as "He's a fucking Republicon. Don't vote for him."

But it takes some gall to hijack another political party in order to survive. You know what else hijacks a host for its own benefit? Parasites.

Wikipedia's entry on the Strangler Fig sounds eerily like the Republicon party, in fact:

They all share a common "strangling" growth habit that is found in many tropical forest species, particularly of the genus Ficus.[1]This growth habit is an adaptation for growing in dark forests where the competition for light is intense. 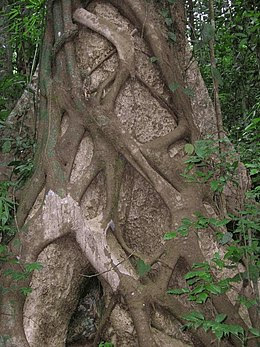 Artist's impression of the Republicon Party taking over the Green.

When Republicons get desperate, some invade other parties to sneak past voters, and some just get vicious. Maricopa County Attorney Andrew Thomas is, like John McCain, getting creamed* by a Democratic challenger. Like John McCain, since he knows he can't win on the issues, Thomas has gone negative, and the local Republicon attack poodles outdid themselves on his behalf:

How far is too far when it comes to political ads on TV?

An official with the Arizona Republican Party says he pulled an innuendo-heavy ad linking Tim Nelson, the Democratic candidate for county attorney, to defense lawyers in child- pornography and child-murder cases.

At least one local station, Channel 12 (KPNX), refused to run the ad because of its content; Channel 5 (KPHO) aired the ad once, on Tuesday night.

Thomas' campaign, of course, bleated about not being responsible, having no control over what others do, blah blah, conveniently ignoring the fact that the ad was based off of things they themselves had said:

In mid-September, one of Rose's associates issued a news release saying that a lawyer who defends pornographers contributed to Nelson's campaign. Nelson donated the $390 in question to a charity for parents of murdered children.

Take a moment to absorb the idiocy.

Thomas, of course, sees nothing wrong with this:

Thomas has attacked Nelson for being involved in a post-conviction appeal for a death-row defendant 10 years ago.

Thomas said that he had not seen the pulled ad, but when the script was read to him, he called it an "exaggeration of the facts when no exaggeration is necessary."

"The fact is: My opponent has prostituted himself to lawyers for Valley criminals," Thomas said. "I would hope the party, if they choose to help my campaign, will rework the ad to stick to the facts as laid out in our campaign material."

What fucking facts? The fact that you, as a county prosecutor, apparently don't realize how the fucking law works?

I hope Arizonans are smart enough to realize that smoke is being blown up their bums. The fact that a few defense attorneys are donating money to a man's campaign doesn't mean he's "soft on crime." It doesn't mean he won't make a hard-nosed county attorney. Former defense attorneys often make first-class prosecutors. Morons who attack opponents for getting campaign donations from defense attorneys, on the other hand, often make utterly horrible prosecutors. They seem to have misheard their job title and believe they were elected to be persecutors.

So far, Arizona 'Cons have demonstrated two out of three Stupid Republicon Tricks for this election cycle: the pretend-you're-anything-but trick and the go-absurdly-negative trick. How long will it be before we see the ride-the-coattails-of-a-popular-Dem trick?

*This is Arizona we're talking about. A Dem pulling even with a 'Con is a nearly unheard-of event, and thus qualifies as a supreme ass-kicking.