Grand Canyon : dawn panorama from Desert View
Image by Ian Parker, Evanescent Light
I grew up with this vista practically in my back yard.

Drive through miles of Ponderosa, pinion and juniper forest, and you'll eventually come to a place where the earth opens up. Stand on the rim, and you're swallowed whole by its magnitude. It doesn't seem like a river could ever create something so huge, but due to the vagaries of Southwest geography, streams and the mighty Colorado River eventually carved out a gorge over a mile deep, 277 miles long, and in places 18 miles wide. 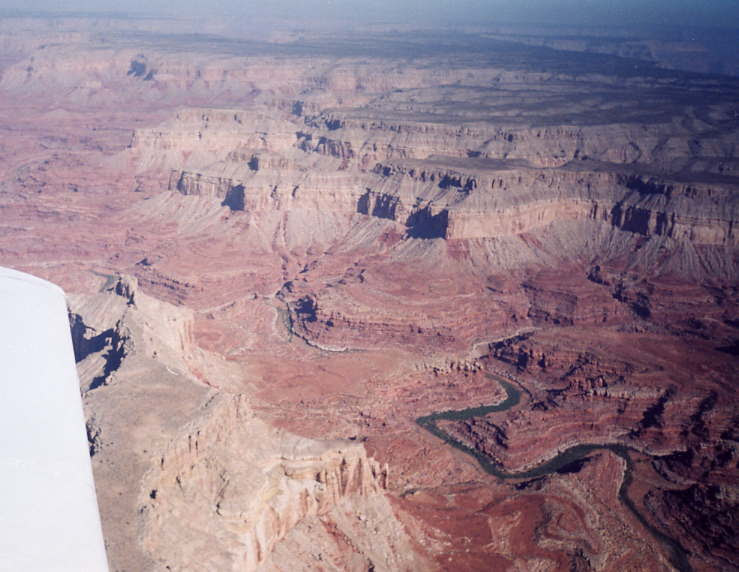 You can't really comprehend the size of it until you look down from 25,000 feet. Coming back from Seattle, my plane flew directly over it. I stared down into the depths of the gorge, saw its fantastic pillars and terraces, and in the minutes it took to pass over, realized again how truly magnificent the Grand Canyon is. There is nowhere else on Earth that so much history is revealed so spectacularly.


Oceans, seas, deserts, lakes, plains and river valleys are all revealed in the canyon walls. When you look down into it, you're gazing at places that existed before North America even became a continent.

This incredible natural cutaway is due to two major factors: the power of water to erode, and the uplift of the region that forced rivers and streams to excavate rather than evade.

The Colorado Plateau formed over hundreds of millions of years. As continents collided and mountain ranges formed, the plateau went through several major periods of uplift. When land goes up, rivers must go down. The precursors to the Colorado River merrily chewed their way through layers of sedimentary rock, forming pathways the future Colorado River would be able to use as shortcuts. Little known fact: most of the rivers in this area used to flow north. It wasn't until mountain ranges and basins started to rise that the rivers were forced to find new paths, first to the west, then gradually turning south.

As the river cut down, it sliced its way to the past. In the Canyon walls, you descend through layers of the Earth's history. The young, creamy layers of Kaibab Limestone form the Canyon's gorgeous white rim. Fossils tell of a Permian sea, filled with marine life from 225 million years ago. Further down, the Coconino Sandstone speaks of a 260 million year-old desert. Five million years before that, the area was a warm swamp where the Hermit Shale was deposited. The alternation between marine, freshwater, and arid environments takes us through thousands of millions of years into the past, until we reach a time so old that colliding plates compressed and heated old deposits, creating the metamorphic formations of the Vishnu Shale - two billion years old.

Wikipedia kindly provides a concise description of the Canyon's geology, from which I've happily filched this diagram of the rock formations. If you want to play with mnemonic devices, you can learn what Know The Canyon's History, Study Rocks Made By Time [Vishnu!] means here. 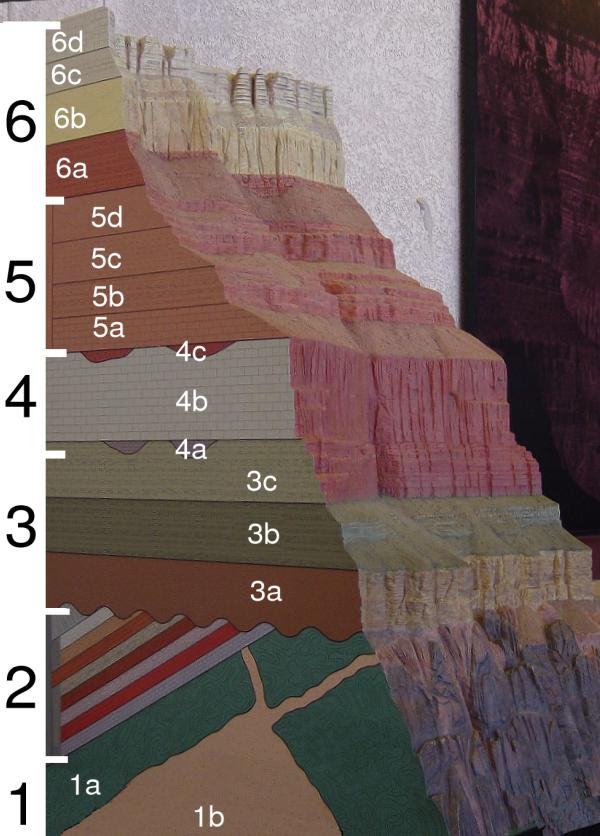 That's an astounding amount of stone, telling the story of Earth all the way from the Precambrian to the present day. The deepest layers of the Canyon were laid down right around the time life, still single celled, was developing aerobic cellular respiration. Fossils embedded in the Canyon walls trace our history from those humble origins through the Cambrian explosion, dinosaurs, and on to us.

This is what created the Grand Canyon: water, relentlessly and patiently carving its way through sediment laid down through ages of the Earth, uplifted by the titanic forces of plate tectonics. Rivers, creeks, flash floods, landslides, wind and rain all conspired to sculpt one of the most astonishing vistas in our world, a laboratory for geologists and paleontologists. Where else can you go to see two billion years of history all in one sweeping glance?

It's nothing if not Grand. Let's ensure it stays that way.

As always, click the images for their origins.
Posted by Dana Hunter at 2:54 AM

It's amazing what God can do with a couple of months and a flood.

(Just kidding. Stunning pics. I haven't gone yet, but I will.)