And why not take advantage of it?  Okay, so it wasn't all that fine, but it wasn't peeing down rain and/or freezing cold, and there appeared to be a cloud break in the offing, so ye olde intrepid companion and I ventured down to St. Edward State Park for a (possible) last adventure before the rains come.

I found some geology there, which I shall tell you about very soon.  For now, we continue the fine old tradition of posting the outtakes whilst I'm still too tired to think. 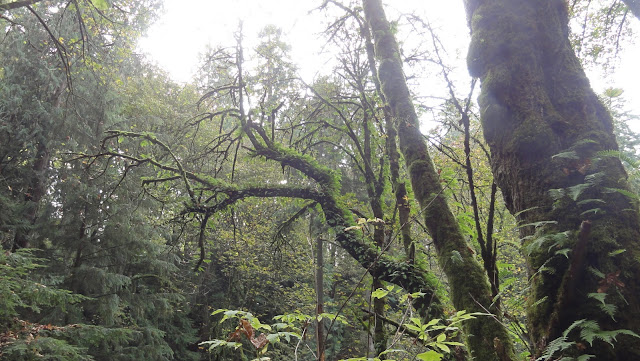 My first experience with epiphytes was at St. Edward.  Before then, I'd known in an abstract sort of way that shit could grow on other shit, but this was the first time I'd seen actual plants growing merrily on actual branches.  And the thickness of this forest - overwhelming.  When the seaplanes aren't zipping overhead, there's barely any sound, and what does reach you is muffled by all the biology.

This is not something people from Arizona are used to.

And such a variety of mushrooms!  Not that I can identify them yet, but we'll get there someday.  For now, they're just a bit o' fun with fungi.  And yes, I had to go there.

More fun with fungi is required: 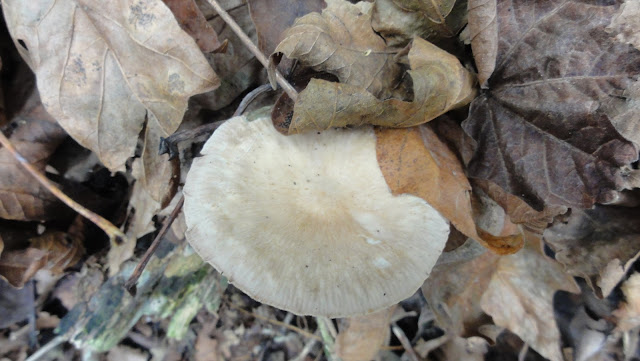 There was quite a profusion.  Hikers we met along the trail were rather surprised the frosts of the past few days hadn't yet killed them.

Fall was definitely in the air, so thick you could smell it, and hear it as enormous dead leaves fell to the forest floor.  But that's not to say all the flowers were gone.  A few plucky purple petals poked their way through the detritus, and laughed at cold weather.  They also laughed at my camera, which for some reason has difficulties with purple in low light conditions.  Finally managed this shot though: 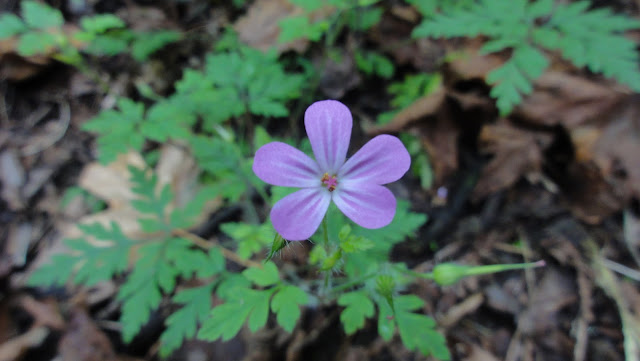 That's as good as it gets, folks.

A brisk hike down the ravine brings you to Lake Washington, where you can enjoy yourself amidst trees leaning into the water: 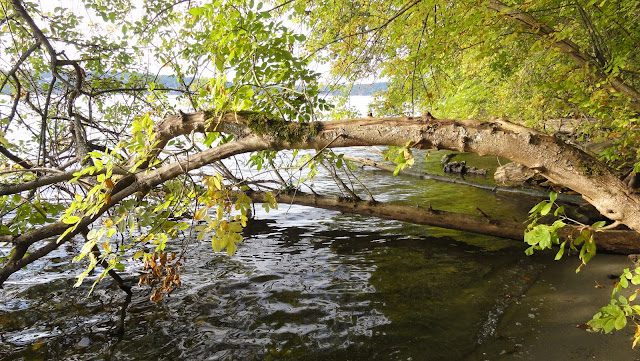 Down at the water's edge, a very fat spider wandered over the rocks, looking for I know not what: 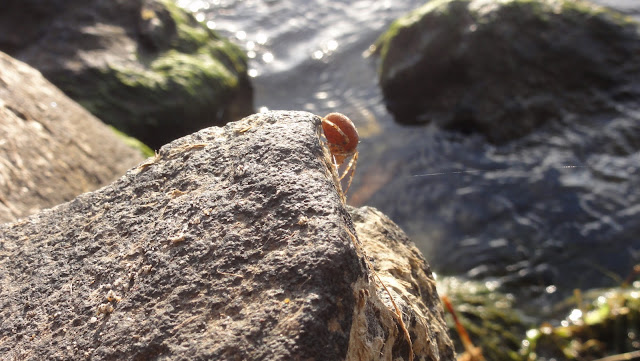 In the category of other things beginning with S, we also spied a couple of seaplanes: 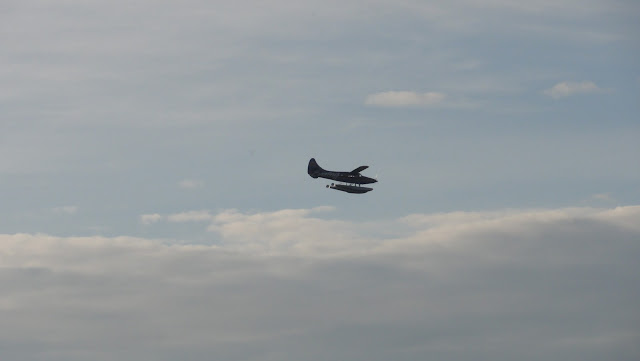 Embiggen that one, and you'll actually be able to read the writing on the side.  I loves my camera! 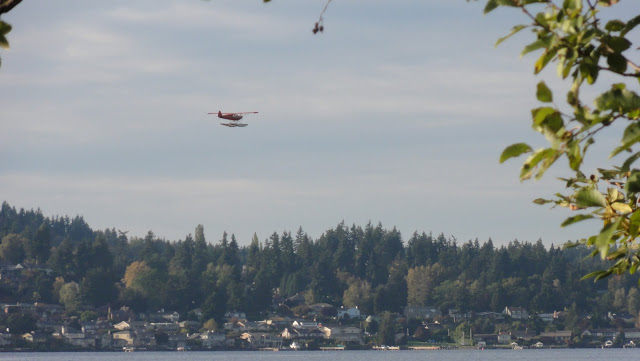 Fat little spiders were everywhere - definitely not an arachnophobe's paradise.  I'm not sure if they were actually that fat, or carrying egg cases, but some of the patterns were lovely: 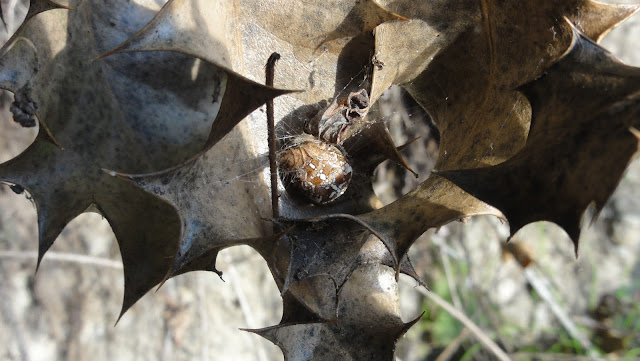 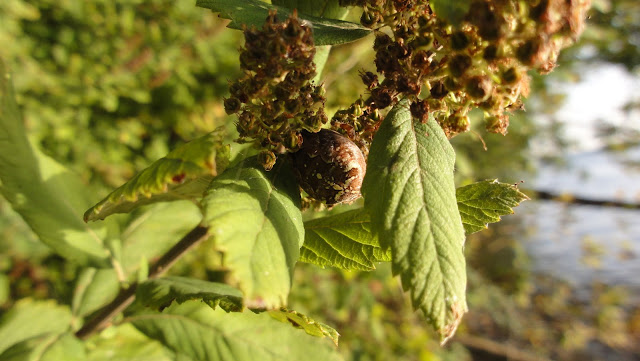 Nearly ended up wearing that one in my hair, because I was so busy trying to find interesting pebbles down at the water's edge to pay attention to what happened to be lurking in the plants I was brushing against.  In the past, would've totally panicked.  Now, I just switch to macro mode.  The spiders and other insects so far haven't particularly minded.

But we shall speak no more of spiders.  Let's babble about boats instead.  This was an interesting one: 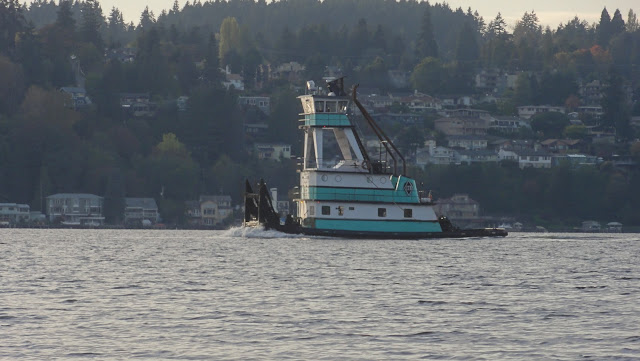 And the wake from the boat, which is the closest Lake Washington gets to surf on a calm day: 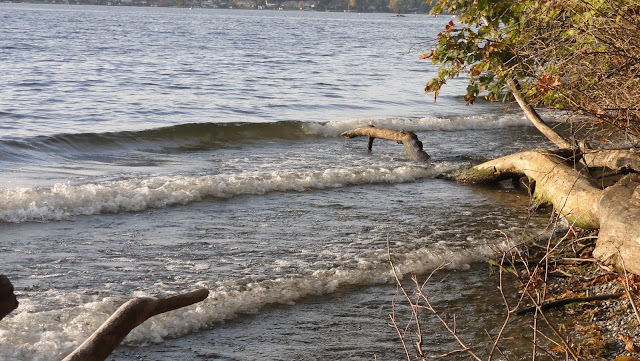 Some rowing teams were out on the water: 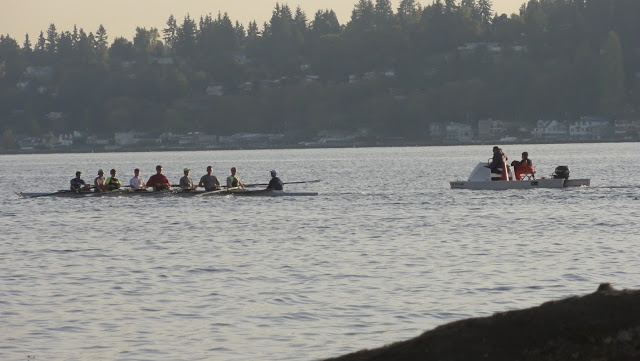 Some rowing teams were more unique than others: 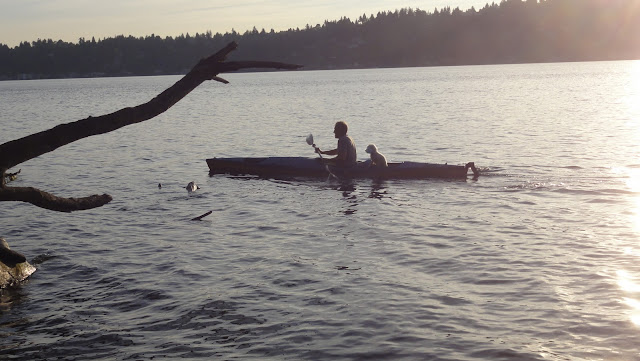 We got back up the hill just about the time the sun neared sunset.  The old seminary building looked gorgeous, especially with the moon peeking over its shoulder: 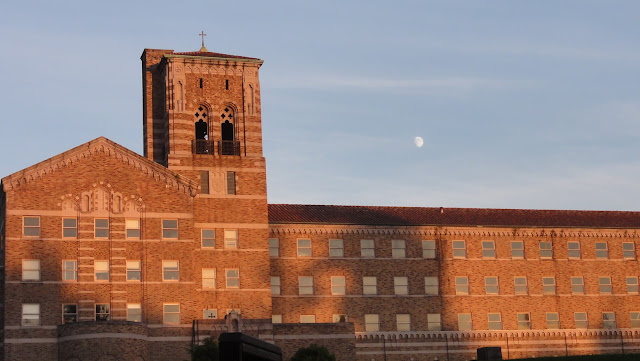 Closeup of the moon and roof: 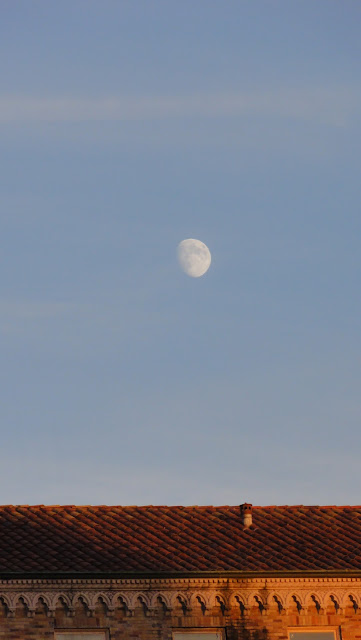 That lovely building's turning 80 next year, although it still looks practically new.  I love its architecture, especially the balconies: 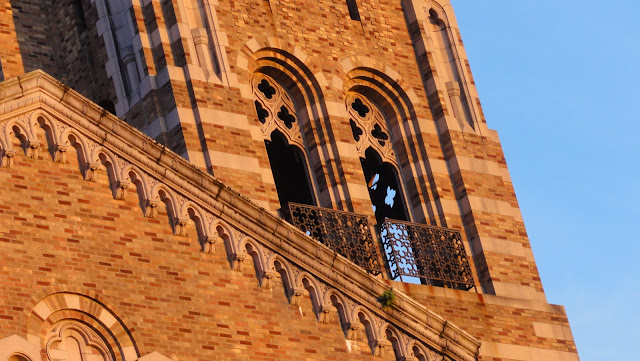 One last long look at the moon: 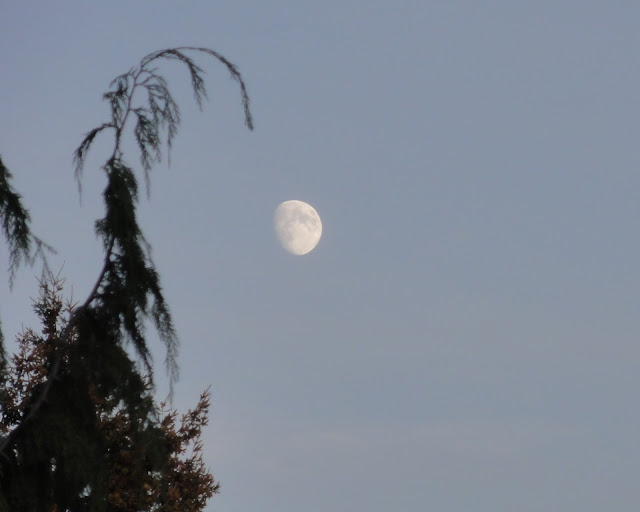 And then time to head home, make dinner, and watch the rest of season one of Castle.  Then suffer because we didn't have season two.  Ah, well.  Something to look forward to next weekend, when it's possible the rains will return and prevent further adventuring for this year.

It's not like I don't still have 20 gajillion photos left over from prior adventures to keep us busy till spring or anything...
Posted by Dana Hunter at 12:49 AM