Wherein I Do Some Geology All By My Lonesome

Well, actually, my intrepid companion was there, but he paid more attention to the planes.

We've been to St. Edwards State Park before.  It's one of my regular haunts - I try to get there at least once a summer.  Convenient, y'see, and some of the best pebble-hunting grounds around.  There's a place at the end of the Grotto trail where you come on a nice sandy bit o' beach, with riprap trapping nice pools of water with pebbles in.  It's a fantastic place to linger on a summer afternoon.  Little cold for fall, though, which is too bad, because there's nothing like rolling ye olde pants up to the knee and plunging into the pools in search of pretty pebbles.  Last year, I even found some bits of glorious gray schist washed up, which is rare around Lake Washington.  This time, I found a few calico pebbles and a foliated chunk of something-or-other that I might, someday, be able to identify for certain, lingering close enough to the water's edge to prevent foot-freeze.

Here's a view of mah pebbly beach with foamy waves: 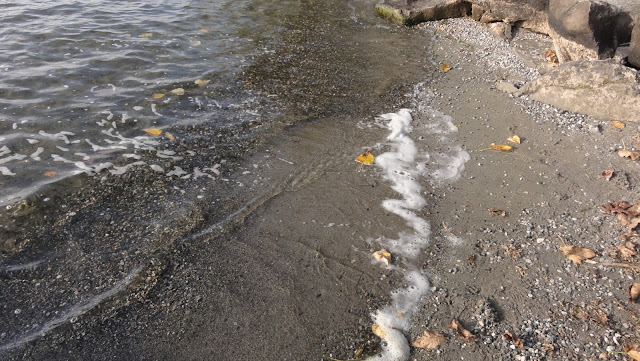 But the pebbles weren't half as exciting as being able to recognize geologic formations all by myself.


Usually, when I write up these missives, I have some sort of guide around.  I've got a book or a website that's discussed the geology in enough detail for me to puzzle things out, and thus sound like I know what the fuck I'm talking about when I babble about them.  Not true in this case!  St. Edwards has too much damned biology hanging about to be a huge geologic draw.  You have to really hunt for areas of exposure.  Luckily, my intrepid companion found one whilst we were searching for a spot where we might be able to see the seaplanes land despite all the damned trees.  There's a narrow break between the trees, a steep scramble, a little bench of beach, and if you turn around, glory be!  There's some bare geology: 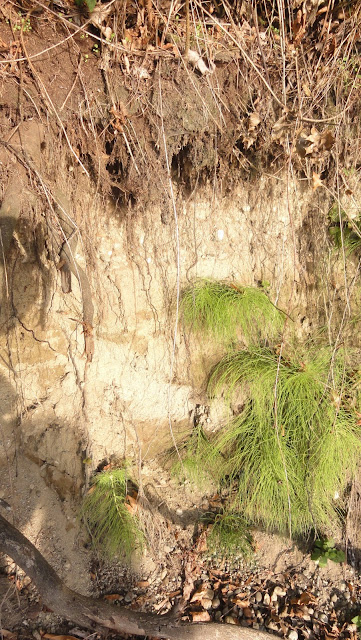 It's even got pebbles in! 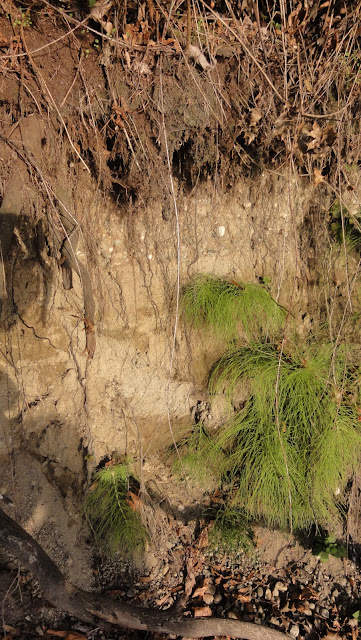 Okay, so what are we looking at?  Later exploration revealed it's gotta be some of that yummy Olympia non-glacial stage stuff we talked about when exploring Discovery Park.  How do I know that?  We'll get to the smoking gun a bit later.  For now, let's savor the novelty of having actual dirt exposed in western Washington.  This bank has a few items of interest.  Such as these lovely pebbly layers: 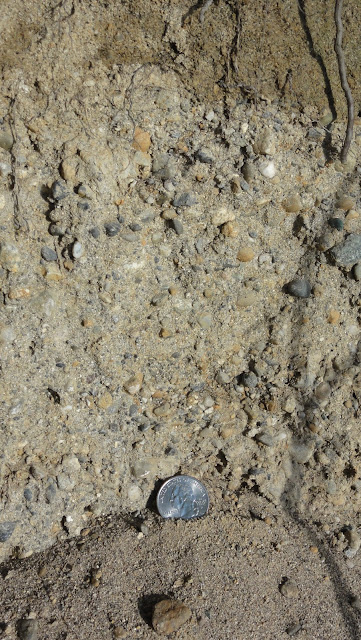 Yes!  I finally remembered a quarter for scale!  Good thing I hadn't spent it on junk food at work. 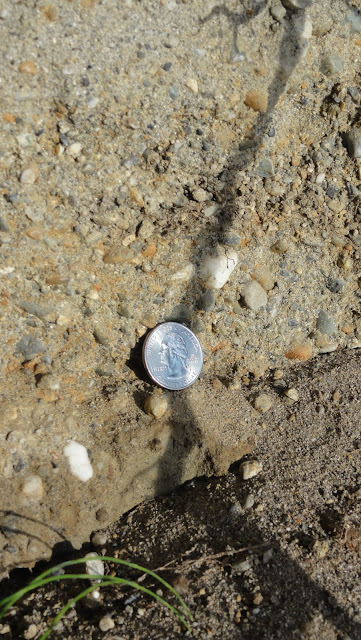 Isn't that a pretty bit of white quartz down there in the bottom left?  As for what put the pebbles there, it would take further exploration - and possibly some malicious mischief done to interfering trees - to determine if those are old stream beds or lake shores.  But we do know, from work actual geologists have done, that these sediments were laid down in a flood plain before the glaciers came.  We get lots of sand, lots of pebbles, and some gravel: 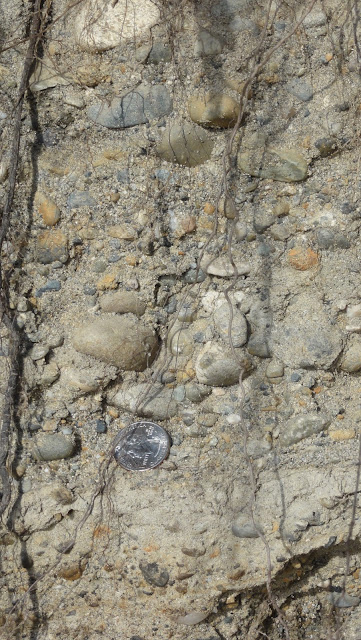 And here's a full view of the bank where all these lovely layers may be found: 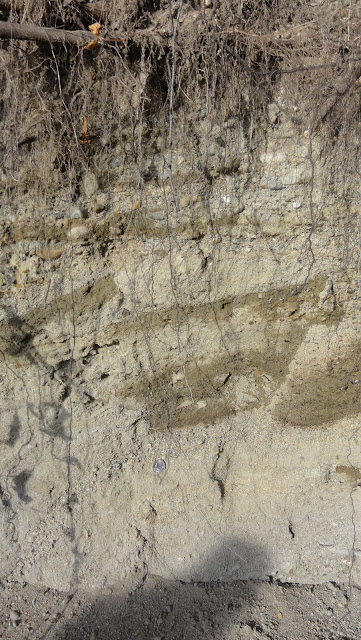 I've never been so happy to see a plain ol' dirt bank in my life.  Geology changes things.  It makes the ordinary stuff seem almost ethereal.  Even the drab bits of earth are beautiful when you know they've got a story to tell you.  Okay, so they're having to speak to me in "See Spot deposit some gravel!" language right now, but the point is, I now understand that I'm seeing more than boring old rocks and dirt.

So how can I be sure that this is the famed Olympia non-glacial stage stuff?  Simple.  For one thing, we're down close to sea level, and that's where the Olympia etc. deposits are.  Secondly, there's a ginormous freaking clue up the Seminary trail: 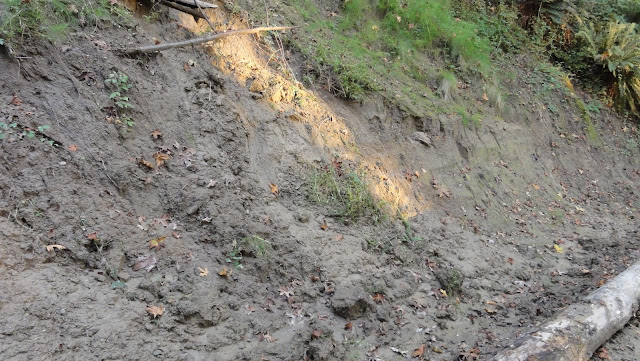 That, my darlings, is a big bare bank of our old friend the Lawton Clay.  And we know the Lawton's resting above the Olympia etc.  Ergo, Olympia down below.  My intrepid companion just gave me a bemused look when I told him to strike everything I'd said about the previous bank possibly being Esperance Sand.  (I'd gotten my elevations and strata mixed up, until I saw this beautiful exposure.)  Then he watched me get dirty in the name of geology.  Sometimes, I wonder why he puts up with me.

All right, so if I fucked up badly enough to think Olympia etc. was Esperance, how can you trust my word this is the Lawton Clay?  Well, let's do some field work.  Is it thick?  Check.  Is it gray?  Check.  Is it clay? 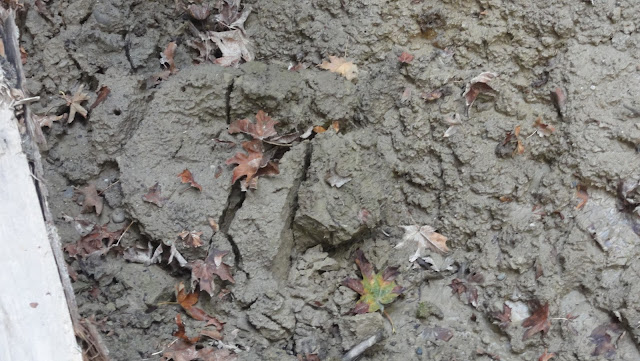 Certainly chunks apart like big blocks of wet, nearly-pure clay when it falls, don't it?  But let's pick up a chunk to see: 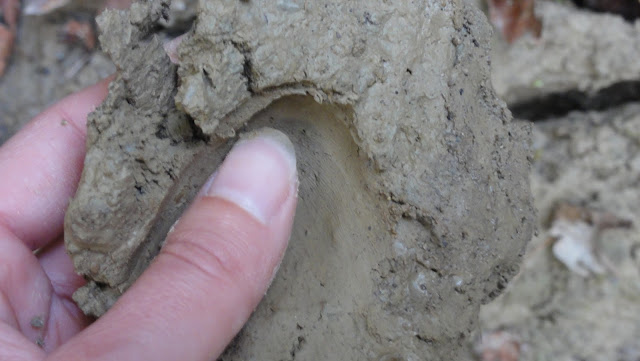 You could make bricks, pots, and little sculptures from this stuff.  It's smooth and tacky and sticks to your fingers like all that lovely modeling clay you got to mix up and splat your friends with in elementary art classes.  Yup.  That surely do look like clay!

So, if that's the Lawton, that means we were indeed busily putting quarters all over the Olympia etc. deposits, and further up the hill, we should find... 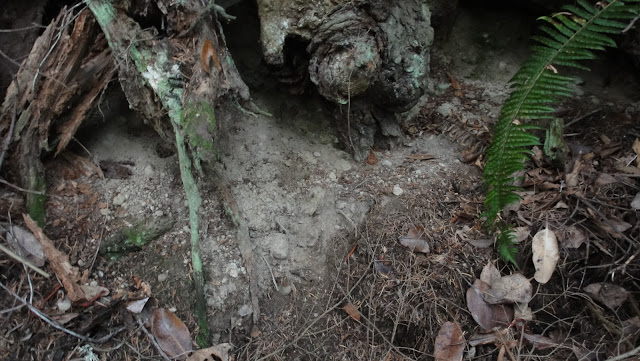 Could it possibly be... 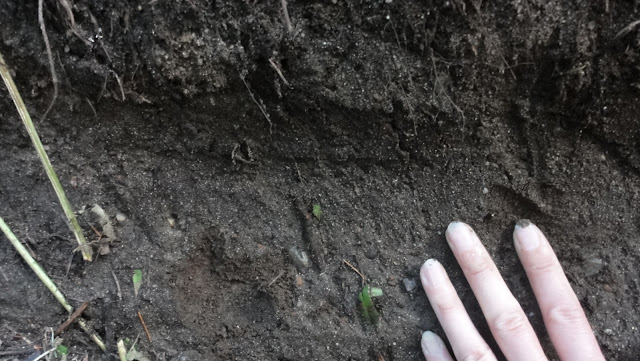 Yes!  Esperance Sand!  Too bad we came upon it as the trees were busy filtering out very nearly all of the remaining sunlight, but at least Handheld Twilight mode allows us some decent view of things.  Glacial outwash, baby, yeah! 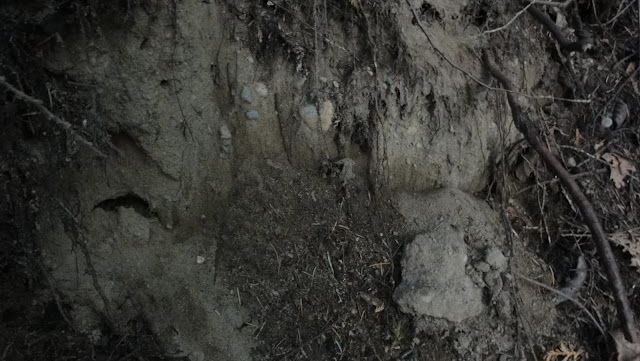 We can even see some pebbles in there.  Fun times!  And a triumphant moment.  Do you know how hard it is to find any exposure of this stuff along the trail?  Up there, where things flatten out, the damned biology has taken over every available space.  There's just a few spots where a bit of over-steepened bank caves away from the roots, and then a glimpse, a mere glimpse, of glacial outwash goodness.

As for the Vashon Till, it's still MIA.  Probably buried under 5 billion tons of bark.

So there you have it.  Actual geology, despite the best efforts of the biology to hog the spotlight.
Posted by Dana Hunter at 1:57 AM

Actually you are doing pretty much what Darwin did in South America (in terms of seeing something and thinking about it). Recall that Darwin did geology on the Beagle, as much as Biology. (Seeing shells in the Mountians of Chile for example) In the old days geology was pretty much an observational science. You gathered information and tried to make up a story to explain what you saw. For example read The Map That Changed the World on William (Strata) Smith. He had to invent concepts like superposition (that newer rocks tend to lie on top of older ones in general etc).
If a geologist were assigned to map an unmapped area, it would be by wandering around and seeing things. As observations are made hypothesis are made and tested against futher observations.
For example you discovered that relationships among rocks hold at least in a local area i.e. the same rocks tend to lie above each other.

I love St Edward's. I've done a bit of biking around there in the past. One effective, if not healthy, way to discover the geology, I've found, is to have a branch of the biology smack you in the face when heading downhill.