I Miss My Spider

A few weeks ago, a spider came to live on my porch.  It built large and beautiful webs, taking advantage of the porch rail and rafters.  When it rained, the web collected raindrops and became something enchanting: 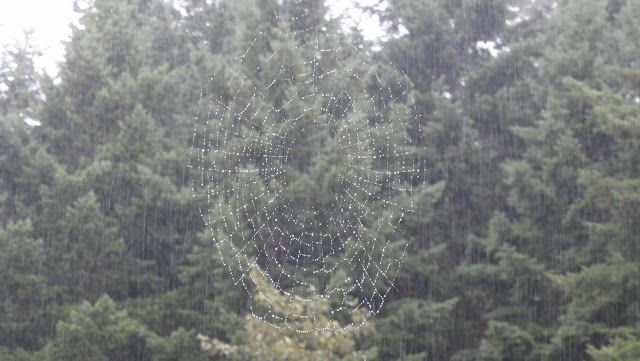 When it stopped raining, the silvery web against the dark green trees shone as if hundreds of diamonds had flown into it and gotten stuck: 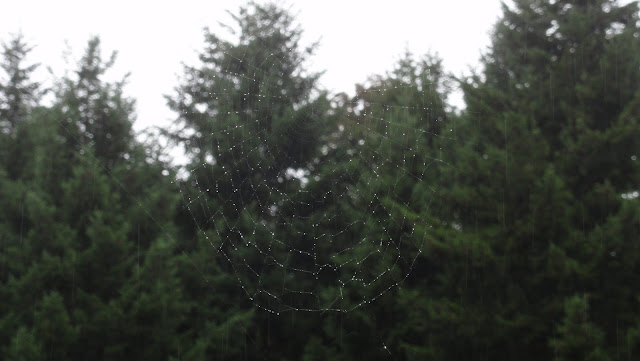 (Arachnophobes: do not go below the fold.)

I come home for lunch.  The spider's dinner time was apparently the same time, because when I'd step outside for a smoke, it would almost invariably be munching: 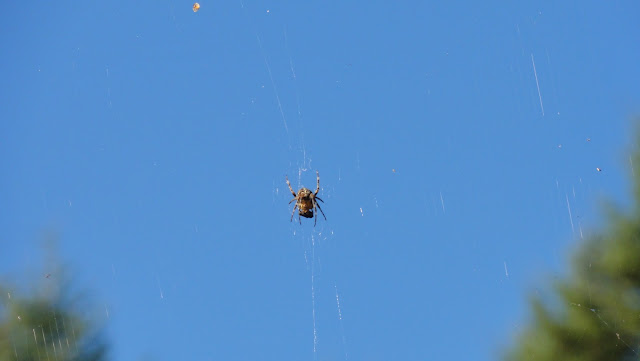 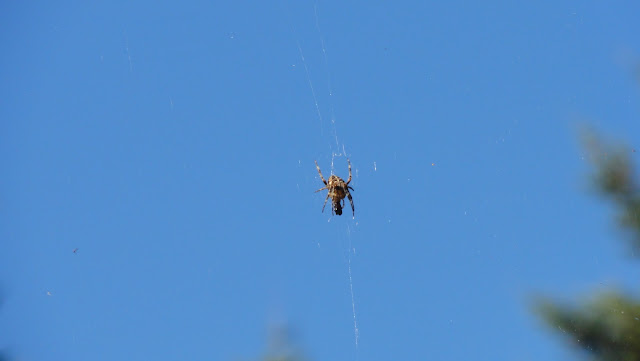 I spent an instructive afternoon once watching it rebuild its web from scratch.  Efficient little bugger, shuttling back and forth on the non-sticky threads, carefully arranging all the threads just-so, until a beautiful new orb graced my porch.  Which, alas, I could not photograph because the sun was at the wrong angle and I had no contrast.

And now, my lovely orb spider is gone.  Dead, moved south for the winter, I don't know.  But I miss it.

I've noticed, since getting the new camera, that I have a different relationship to the creepy-crawlies in the natural world.  I used to be distinctly uncomfortable around spiders and freak out in the presence of bees.  These days, I'm more willing to get close, hang out, let them do their thing while I observe. And I've discovered they're perfectly okay with that.  They don't bother me if I don't bother them (mosquitoes and the annoying flies on Hurricane Ridge excepted).  Not to mention, they do useful things like eat other bugs and pollinate plants.  They have an intriguing evolutionary history, some of them have complex societies, and all of them are quite lovely - if you just take a moment to really look.

Of course, that course of action isn't recommended for those with severe allergies.
Posted by Dana Hunter at 11:22 PM

i think the outdoor spiders have moved inside. i noticed i have preliminary webs all over the place.

as long as they leave me alone, and are not brown recluses, we will get along fine.