Longtime readers may remember my howls of outrage when I stayed up all night to finish Blackout only to realize it's the first bloody half of a single book, the other half of which I'd have to wait six months for.  Now, hopefully, you understand why I abandoned all y'all for a night so that I'd have some chance to sleep a few hours before work.  Wasn't going to wait any longer, damn it.

Like WWII and the Blitz, this is a chaotic, nerve-wracking, horrifying, sometimes ludicrously funny and occasionally sublime experience.  I have only two things against it: 1) I had to wait six months for it after being left on the mother of all cliffhangers and 2) was that added bit of cheese at the end strictly necessary?  Okay, I have a third thing against it: I ended up reading until 7 in the ay-em two bloody days in a row because there was never a good stopping point, yet the book's too big to finish in one sitting in the middle of the work week.  Argh.

Anyway, if you want to see time travel done right, you owe yourself some Connie Willis.  And don't worry, my dear atheists and skeptics: when she coulda gone there, she didn't.  You'll see what I mean when you read it.

I anticipate with dread the next Connie Willis tome.  I'm getting too old for this all-nighter shit.  But I know I won't be able to sleep until I've read every word.

That book has the honor of being the only fiction I've read in months.  Now on to the science! 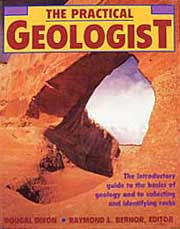 We shall start with this one, as I want it out of the way.  I'll say just this about it: I'm glad I waited to buy it until I found it used.  And I'm glad I read it in between calls at work instead of during my prime reading time at home.  It's not that it was bad, it just felt rushed, incomplete, and too thin to really accomplish much.  As an introduction to field geology for those who might kinda sorta be thinking about it, this book probably would do fine.  But there have got to be better books out there for people who really want to get into the meat and the marrow of this stuff.

And that is all I shall say about it.

Yes, I am the kind of person who reads textbooks for fun.  I found this Third Edition at Half-Price Books, and since I always have this vaguely guilty sense that I should really know more about oceanography, picked it up.  The worst problem with it is that it's too floppy and big to read comfortably in bed.  Aside from that, it's easy to read.  Everything's clearly and logically laid out, the info boxes actually contain informative bits, and once I got done with it I felt rather less stupid when it comes to how the oceans work. There's even a bit in there that has to do with Seattle and will come in useful as I'm writing up Seattle's geology, so that's a delight.

Right, we've had water, now let's have some ice.  Lots and lots of ice.  Got on a glacial kick, didn't I?  And it all started with

This one was a good one to begin with.  It's a small book, but packed with delicious information and lots of educational photos.  Biggest problem being, this is a reprint, and some genius at the publisher decided they didn't need no stinkin' color plates this time round.  Grr.  Even without those, this is an excellent guide to how glaciers do their thing, eminently readable.

It might leave you feeling a little cold however.  A-ha-ha.

I've been meaning to read this one for years.  Anyone with even a passing interest in ice ages should pick this up.  It tells the story of the past, present and future of ice ages, from how we figured out there had been some to what they were like, possible causes, effects, and what we've got to look forward to.  You'll find out how works of fine art can double as climate detectives, run in to our old friend Louis Agassiz, beat about the brush with Bretz, and engage in all sorts of other antics.

This book did a good job showing the investigative nature of science, and showing the sheer power of ice sheets.  I enjoyed it muchly.

Told you I read textbooks for fun.

This one was a tough slog.  For some reason, I have a hard time envisioning how glaciers work, and this isn't your pop-sci explain-everything-in-dumbed-down-terms sort of book.  It is what it is: a serious motherfucking tome, chock full o' technical terms, math, illustrations, diagrams, and references to papers.  It doesn't coddle you.  And although I rather felt as if a large glacier had spent the last week grinding its way over my brain afterward, I wouldn't trade it for anything.

Bonus: it's written by Brits, and nobody Americanized the spelling.  Wouldn't have complained about a better copy editor, though - apparently, it was proofed by a person who failed English 101.  But the typos don't detract from the book, and give a former English major something to feel intelligent about just after being hit head-on with actual math, so that's a little bit of all right, then.

And, after that book, I finally can look at glacial landforms and start to really see how and why they are the way they are.  Now that I've been through this trio of books, glaciers aren't the cold ciphers they were before.  Hell, I can even talk to you about the difference between cold-based and warm-based glaciers, and what sorts of landforms they each produce.  That's no small thing, considering the most I knew about glaciers till now was that they're a) big, b) icy, and c) dig and dump a hell of a lot of rock.

With that, we're at 46 and counting for the year, and that's not counting the number of books I haven't read all the way through yet, of which there are a lot.

Consider yourselves warned.
Posted by Dana Hunter at 2:42 AM

I'm going to go turn the heat up now!

Yay for Invitation to Oceanography! Paul Pinet was my Sedimentology professor at Colgate and I also took his upper level GenEd class that introduced me to John McPhee, via Encounters with the Archdruid. Paul was (and is) an absolutely exceptional teacher.