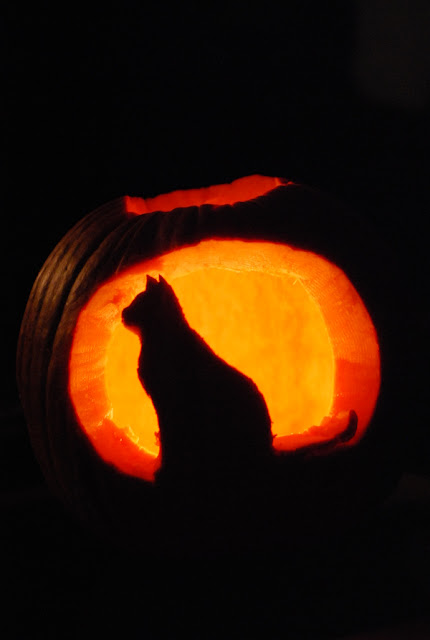 Love it!  Of course, it's got stiff competition from Silver Fox's Jack-o-Breccia.  If you haven't seen Jack yet, you really must go say hi.  Bonus: considering what he's made of, the neighborhood hooligans might hurt themselves should they try to smash him.  My kind o' jack!

For those who've been waiting patiently all month, Accretionary Wedge #28's up at Matt's place.  It's all tricked out, too - nice Halloween touch, there.

Hopefully, in the next day or so, I can show you what I did with my Halloween before Aunty got nasty.  I'm pretty sure I've got permission to post the photos, but everyone was rushed and so I don't want to put anything definitive up until I'm sure I didn't shoot something that shouldn't have been shot.  We were testing the camera in low-light stage conditions, y'see.  Some of them came out brilliantly.  It'll make you want to go see the musical, only you can't, because it was the last show.  But there's more where that comes from, and I might even have sneak peeks, and those of you who don't live in Seattle will end up wishing you did.

Best thing about today: giving my intrepid companion his All Hallow's Read.  He's always doing superbly thoughtful things for me, rescuing me from computer ruin, chauffeuring me around whilst I car shop - it was nice to finally take him by surprise with a little something.  (Why Buildings Fall Down, in case you were wondering - All Hallow's Read's about giving a scary book, and, well, that's grownup scary and interesting.)  Five minutes in a bookstore, people.  That's all it takes to make someone happy - as long as you go in having a good idea what they might like.  Next Halloween, give your own intrepid companions the gift of a scary book they don't expect.

Next best thing about today: watching Jesus hand out communion wafers while saying, "Body of me."  Awesome!

And you, my darlings - what did you do to celebrate the best holiday of the year?
Posted by Dana Hunter at 11:31 PM

Even if you don't like Stephen King, read "Desperation" for it's somewhat strange Nevada + geological references (the latter aren't rampant, so you'll have to read the whole book).

I know, it's a day late for All Hallow's Read, and I'm not giving it to you physically. Darn!

Thanks for the book. I've been reading about how the Pantheon will fail someday.

For those who aren't engineers, I'll just point out that one of the things nearly all of us are fascinated by is why things fail. It's a job requirement - to build things right, you have to know the limits of the materials and the designs you want to use. Engineers learn from mistakes of others - that's something I wish politicians would learn to do.