Old news today, I'm afraid, my darlings. I'm off wi' me best friend, meeting Pharyngulites and PZ MYERS!!! So I've had to filch some political snippets for your bashing pleasure that are not quite as fresh as our usual fare.

In light of the successful maiden voyage of the HMS Elitist Bastard, I considered coming kitted out in my best Captain Jack Sparrow garb: 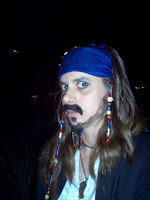 But it's probably much for the best if I just come as myself, complete with best friend: 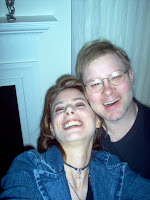 There ye go. Those of you who are attending either event now know what to look for, and those who aren't know what they would have looked for if life weren't such a bugger.

And now, on to the Discurso.

During a recent interview with the Washington Post, CIA Director Michael Hayden said that al Qaeda is “essentially defeated in Iraq and Saudi Arabia and on the defensive throughout much of the rest of the world” including the areas along the Afghanistan-Pakistan border. “On balance, we’re doing pretty well,” Hayden said. The Post even described Hayden’s view as a “strikingly upbeat assessment.”

But Sen. John Rockefeller (D-WV), chairman of the Senate Intelligence Committee, said in a letter to Hayden that he is “surprised and roubled” by his comments to the Post, adding that his assessment of al Qaeda’s worldwide strength is at odds with intelligence briefings to Captiol Hill:

The positions attributed to you are not consistent with assessments that have been provided to the Senate Intelligence Committee over the past year. If the Intelligence Community’s assessment of al-Qa’ida has changed, I would expect the Committee to be made aware of these changes immediately. If the assessment has not changed, then I ask that you explain why you would portray the terrorist movement as “on the defensive throughout much of
the rest of the world, including in its presumed haven along the Afghanistan-Pakistan border.” In fact, I have seen nothing, including classified intelligence reporting, that would lead me to this conclusion.

Seriously Sen. Rockefeller? "Jello Jay" Rockefeller? Since when did he stop stabbing his fellow Dems in the back long enough to send snippy letters to actual officials? Is he actually doing his actual job, or is this just another stunt like the shows he sometimes puts on barking at Bush in public while licking his balls faithfully in private? Intriguing.

With his approval rating hovering around 30 percent, Vice President Cheney nevertheless went to Virginia yesterday to rally conservatives around the Bush administration. The Virginian-Pilot reports that he urged state Republican activists “to promote the Bush administration’s policies during campaigns for this fall’s presidential and congressional elections.”

Great fucking idea, Dick. After all, the Bush administration is so popular that...

A Tuesday fundraiser headlined by President Bush for U.S. Sen. John McCain's presidential campaign is being moved out of the Phoenix Convention Center.

Sources familiar with the situation said the Bush-McCain event was not selling enough tickets to fill the Convention Center space, and that there were concerns about more anti-war protesters showing up outside the venue than attending the fundraiser inside.

[Sen. Lindsey] Graham used his remarks to embrace President Bush, just hours before he was to meet Bush at Greenville-Spartanburg International Airport and accompany him to Furman University for a Presidential commencement address that has divided the campus.
At his first mention of Bush’s visit, Graham paused, waiting for applause. When it didn’t come, it took a slight nod from Graham to prompt a round of applause. [emphasis added]

Okay, so never mind. But Dick Cheney still thinks he and Bush can work some magic.

I sincerely hope they hug McCain and all the other Republicons tightly to their bosoms. Publicly. Openly. Fatally.