Every Sunday from henceforth, I'll be dedicating a post to science. I've had a love-affair with her ever since I read Space - Time - Infinity as a wee child, and saw just how beautiful she is. We'll begin this series with images and words celebrating her, because she richly deserves celebrating. 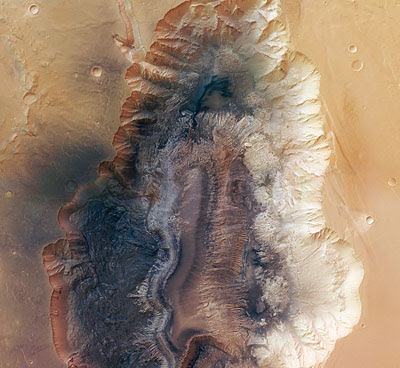 Few things are more exciting than to realize other worlds exist. We're fortunate we live in a time when planets are more than just wandering specs of light in the sky - we visit them (if only by proxy at the moment), explore and photograph them, discover things more weird and wonderful than we ever suspected. We gaze into the valleys of Mars, and wonder: how did they form? Exploring other worlds allows us to discover more about our own.

Hebes Chasma, a trough in the
Grand Canyon of Mars

We smash particles together and learn about the conditions of the early universe. Someday, one of those particle accelerators may tell us what happened at the moment of the Big Bang, the singularity that started us on this wild journey through space and time. Quantum physics and her offspring may answer questions no theologian has yet found a satisfactory explanation for.


Simulation of the decay
of a Higgs particle
Tom Kemp

Neurobiology reveals how our brains create the mind. Everything once considered beyond the reach of human knowledge - how we know, think, feel, and construct the world around us - is now the subject of scientific research. Someday, we will understand how our minds work, and someday, we'll be able to improve them. If only someday could be today - I could use a brain boost.


Some people seem to believe that we're somehow reduced, if we're not the center of the universe, if all we have is Carl Sagan's pale blue dot, orbiting an ordinary star in the boondocks of the Milky Way, less than a spec in the immensity of space. Those folks don't understand science. Of all the species on Earth, of all the humans who have ever lived, we are the ones who are able to reach out through billions of years of space and time, and understand them. We can comprehend the dances of atoms. We have a window into the bizarre world of the subatomic. We understand how life exploded from single-celled organisms into an astounding variety of complex creatures, including us. We know more of heaven and earth than was ever dreamt of, and we're learning more every day.

Science doesn't reduce us. It's given us a universe. Science got us to the moon, where we watched the Earth rise for the very first time. Earth-rise image shot taken by the HDTV onboard the KAGUYA
Posted by Dana Hunter at 1:53 AM

Nice idea, Dana. I've been trying to write more about science and technology, since those are more interesting to me than politics. Unfortunately, politics is still the dominant subject these days.

Speaking of exploring the universe, though, it was a good week in that department.