We Lost Our Liberties. What's Next?

Words cannot expressed how pissed I am right now. Infuriated, appalled, shocked, outraged, betrayed, horrified, and howling mad merely scratch the surface. The fucking spineless bastards in our House of Representatives decided today that the Fourth Amendment has to take the back seat when it comes to "security." Utter fucking bullshit.

What's worse, Obama turned out to be as spineless as the rest of them. He would have lost my vote if we had a viable alternative. As it is, he's certainly lost any chance of my funding - unless he has a spectacular change of heart and filibusters this fuckery in the Senate next week. You can read his full "Fuck you" to the nation at Firedoglake.

Carolyn Fredrickson of the ACLU managed to put a small bit of the outrage I feel into words:

"It’s Christmas morning at the White House thanks to this vote. The House just wrapped up some expensive gifts for the administration and their buddies at the phone companies. Watching the House fall to scare tactics and political maneuvering is especially infuriating given the way it stood up to pressure from the president on this same issue just months ago. In March we thought the House leadership had finally grown a backbone by rejecting the Senate’s FISA bill. Now we know they will not stand up for the Constitution.

"No matter how often the opposition calls this bill a ‘compromise,’ it is not a meaningful compromise, except of our constitutional rights. The bill allows for mass, untargeted and unwarranted surveillance of all communications coming in to and out of the United States. The courts’ role is superficial at best, as the government can continue spying on our communications even after the FISA court has objected. Democratic leaders turned what should have been an easy FISA fix into the wholesale giveaway of our Fourth Amendment rights.

"More than two years after the president’s domestic spying was revealed in the pages of the New York Times, Congress’ fury and shock has dissipated to an obedient whimper. After scrambling for years to cover their tracks, the phone companies and the administration are almost there. This immunity provision will effectively destroy Americans’ chance to have their deserved day in court and will kill any possibility of learning the extent of the administration’s lawless actions. The House should be ashamed of itself. The fate of the Fourth Amendment is now in the Senate’s hands. We can only hope senators will show more courage than their colleagues in the House."

For more information, go to:
www.aclu.org/fisa

The Senate's only going to show some courage if we force it upon them. Time to start taking action now, my darlings, unless of course you don't mind having the Constitution used as White House toilet paper.

Contact Obama and let him know he needs to grow a fucking spine. It's put-up or shut-up time: either he's an agent of change or he's business as usual. His leadership on destroying this bill is necessary in order for him to prove himself worthy of the honor of President.

Contact your Senators. Let them know they need to kill this bill.

Join the fight against the spineless wankers who allowed this monstrosity to be born. The problem with Washington is that there haven't been clear consequences for this kind of behavior. We now have the ability to spank those who eviscerate our Constitutional rights. Just check out this wonderful ad that will be running soon against Steny Hoyer, sellout extraordinaire: 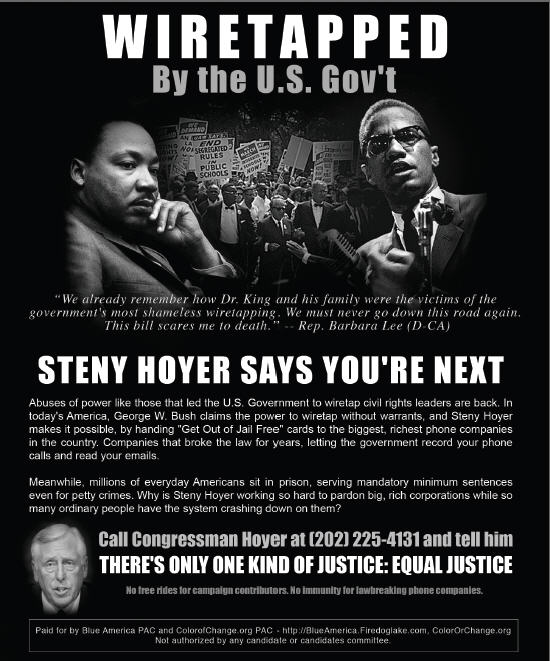 There's strikethrough: $250,000 $280,000 more where that came from. There will be a lot more. Any Dem willing to sell out principles for political grandstanding deserves to get thrown out on his or her ear. It's not enough to have Democrats in office - they must be Democrats who will actually fight for the rule of law and the best interests of the country. Money talks - make them listen to yours.

If you want to do more to get progressive candidates into office, you can contribute here at the Blue America PAC.

We only lose if we stop fighting, my darlings. Don't quit the field.