Last week, we traveled through Southern and Central Arizona, munching our way through various cacti, soaping our hair with yucca plants, and shading under the lovely sycamores. At last, we've reached Northern Arizona, which always shocks the hell out of people who've seen nothing of Arizona but dirt, desert, and dessicated plants.

Northern Arizona's got a lot of green, my darlings. But we'll ease you in with a denizen of the more sparsely-foliaged frontiers. 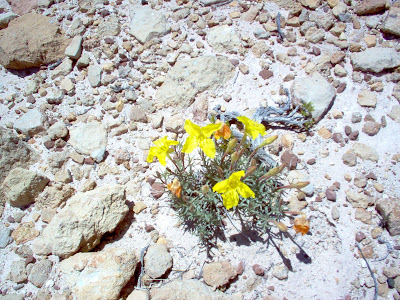 Most of us Arizona denizens just call it that one yellow flower, not to be confused with that other yellow flower, but you can also call it a Lavender-leaf Primrose if you like. These delightful little blooms like to rough it in dry, rocky territory. You can find them on hillsides, ledges, eroded stream valleys, roadsides, forest clearings, and disturbed ground anywhere from just over 4,000 to almost 8,000 up.

This one's growing at Meteor Crater. Talk about your disturbed ground! It's one of the few plants braving the violent wind, sun and rock of the rim.

I know the first thing that comes to mind upon seeing it isn't "Oh, hey, look - dinner!" But we're not natives. It puts out little cylindrical seed pods about 1/2" - 1" long, which Apache children cooked and ate. No report on flavor, alas.

Just goes to show that most plants are more useful than we think, and kids will try anything as long as their parents aren't the ones serving it.

Let's visit one of the Lavender-leaf's relatives next. 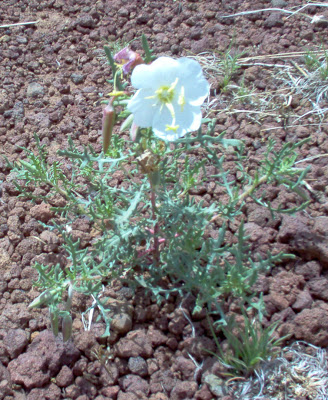 If, as some claim, Arizona is hell, there is indeed a primrose path to it. These delicate-appearing beauties were a ubiquitous feature of my growing up - we had a huge bank of them growing wild along the front of our house. This is where I learned that moths pollinate flowers. We kids used to lurk outside after dark, when the evening primroses were glowing in the moonlight, and watch ginormous moths of the Schinia family cluster around like gastronomes at a gourmet food fest.

These beauties seem to like it just about anywhere. They'll grow in poor soils, like the above bed of cinders near Red Mountain. They're equally happy in the woods, the yard - basically anywhere they can get a toehold, you'll find them in Flagstaff. They're not too fascinated with competition, though - expect them in poorer soils and as first colonizers who are happy to move on when others move in.

The Oenothera family made their way up from Central America and Mexico, and variations on the theme are now found just about everywhere. The crownleaf seems to like the Southwestern states the best, but it's found as far north as Idaho, and as far east as Kansas.

The Navajo seem to have found many uses for it, ranging from an additive for improving the flavor of wild tobacco to a stomach remedy to a poultice for swelling.

If you're having tummy troubles, maybe we should stay on the subject of flowers. 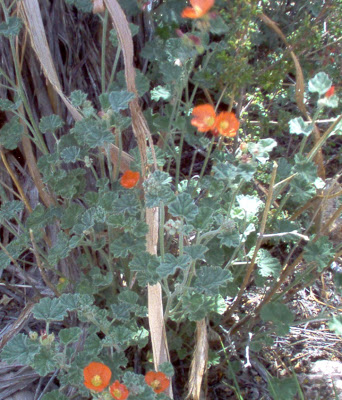 Due to a confusion of common names, I spent my childhood wondering how Native Americans painted with this awesome little flower. This isn't Indian Paintbrush, but it certainly painted my landscape - this plant's ubiquitous throughout central and northern Arizona. When it bloomed in spring, we almost always had a few sprigs of it in a vase. It usually blooms orange, but it can be all sorts of colors, including purple.

Like most Arizona plants, it does just fine in poor soils, but if you get it a prime spot, you may just end up with a five-foot bush. It grows up to two feet tall. And it doesn't mind mixing it up with other plants, as you can see from this photo, taken at the Grand Canyon.

Like the primrose, it was used by Native Americans for a variety of swellings and upset tummies. It also found itself used as a contraceptive. If you're trying to avoid breeding, I wouldn't necessarily test its powers in that regard - unless you're relying on its properties as an irritant. Its stellate hairs, possibly evolved to discourage herbivores from seeing it as a banquet, aren't easy on the eyes.

Speaking of herbivores, let's turn next to an unlikely food source for the buggers. 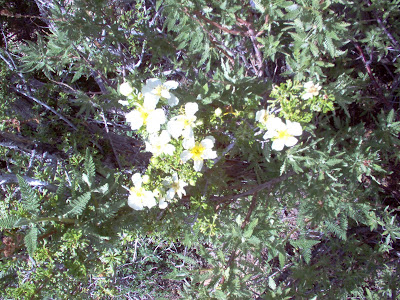 You'll find these gorgeous tree shrubs clinging to cliffs, mixed happily with the trees in rocky areas, and generally beautifying the landscape. They have a sharp but pretty odor that seems to permeate the entire area when they get hot. But local browsers don't appreciate it for it's smell - they think it tastes great. Everything and its brother on hooves eats it, from the mule deer to bighorn sheep. It's the winter forage in northern Arizona, even though it's a bit bitter.

The Hopi also found it useful, although not so much as a snack. They used it as a wound wash, cough syrup, and emetic. Their Snake Priests wore kilts made of its bark. The bark also came in useful as padding for cradle boards, which I'm sure the kids appreciated. The Navajo pound its leaves and stems together with juniper to make a tan or yellow-brown dye.

It's sometimes a life-saving plant. Being rooted firmly near cliffs, I myself utilized it more than once as an impromptu anchor. Beautiful and utilitarian - that's the cliffrose.

But if you're hungry, it's time to go climb a tree. 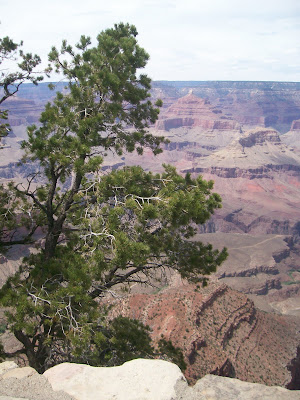 Twoneedle Piñon (Pinus edulis)
Other people spent insane amounts of money on pinenuts in grocery stores. We just headed into the woods and shook down the cones. We'd come out with sacks of piñon nuts, which can be eaten raw, roasted, and constantly. Yum!

You can eat the sap, too. Not so yum. Never tried making piñon needle tea, but since the needles tasted pretty good when we chewed them, I don't imagine that's as bad as the sap.

These little guys are hardy. They're usually found mixed with juniper around the 5,000-6,500 elevations in Arizona and New Mexico. They grow slow and grow old - a one-foot trunk may have taken 200 years to reach that size, and the tree might see another 300 years of life. 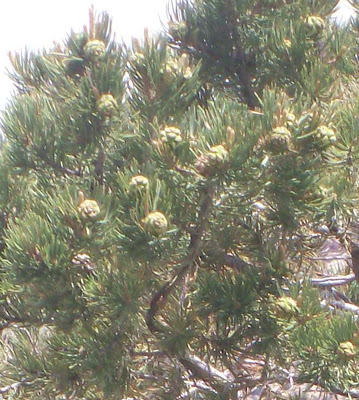 This one at the Grand Canyon shows they're not afraid of precipitous drops. They'll work their way into cracks in the rock and grow out over the edge as if it's nothing.

They're actually New Mexico's state tree. They're practically Northern Arizona's official Christmas tree. I know they're my favorite tree in the universe, simply because they were my close companions growing up. There's something friendly about a piñon forest. Maybe it's because they're smaller, and utterly perfect for climbing.

But not every tree in northern AZ is small. In fact, some are quite huge indeed. Prepare to meet the ultimate in Arizona pine trees. 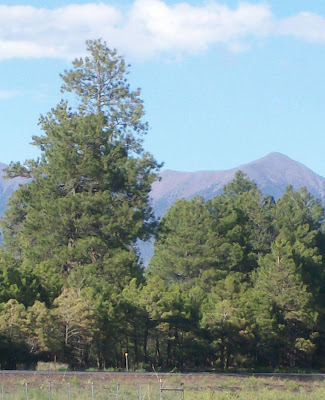 Ponderous they are. They can reach up to 227 feet in height and 290 inches in girth. That is huge.

Height isn't the only thing that will allow you to identify one of these. There are the needles, which are also huge. They're 5-9 inches in length. That is long enough to make a decent broom. The loose, dry needles fallen from the trees also clump well, which for kids means prime building material for fort walls. Adults more often use the actual wood.

Native Americans ate the seeds and the sweet inner bark; used the pitch as glue, torch fuel, and rubbed it inside flutes and whistles to improve the tone. You can also make a blue dye from the roots.

Ponderosa forests are home to a variety of critters, some who browse their needles, seeds, and so forth, others who use them as shelter.

Now, one of the most awesome things about the ponderosa is its bark. If you get up close, you'll see it's an almost burnt-orange color, with black fissures. If you're careful, you can peel off flakes of it that look almost like puzzle pieces. If you stick your nose deep within one of those fissures and inhale deeply, you'll smell an aroma that in some trees is reminiscent of vanilla, in others much like chocolate. Ponderosa pines are some of the best-smelling trees in the world. 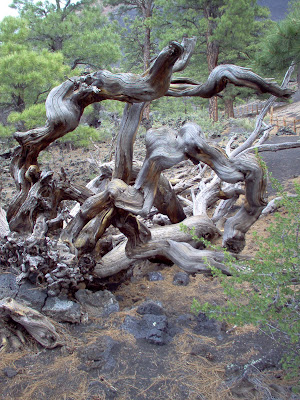 They grow in elevations mostly above 7,000 feet. We had one lonely ponderosa growing in our piñon forest, and there are areas like Sunset Crater where they mingle quite a bit, but they like the high, cool, and fairly wet spots. There's just one problem: they're a bit lazy. At Sunset Crater, where the rains don't sink much past the cinders, they spread out enormous, shallow root systems that leave them vulnerable to the next high wind. So, that solid-seeming tree to your right could end up nothing but a tangled bunch of exposed roots come next gale. Amazing, eh?

Well, my darlings, we've barely scratched the surface of Arizona's flora, but here our exploration ends. You can at least identify enough of Arizona's denizens to impress folks who think of the state as nothing but trackless desert. And if you're caught out in the wild, at least you'll feast rather than famine, right?
Posted by Dana Hunter at 4:09 AM

The escort industry in Internet is growing rapidly for all ages of men and women some cases, These are not allowed in India but In some countries like UK, US, Aus, Ire and more are allowed these type of services.London Escorts

Pine trees tend to have shallow root systems out here in the Northwest, too. They get away with it by growing right next to each other, protecting each other from the wind.

Sorry I don't have a spam link to contribute, but I don't get to London all that often.