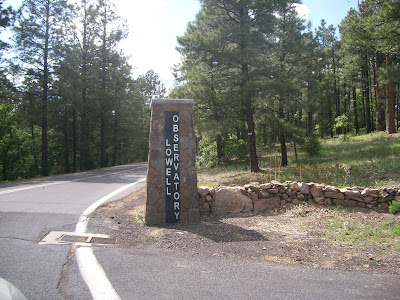 Most people visit Flagstaff for the Grand Canyon, skiing, hiking, and other outdoor activities. But about 70,000 folks a year take a detour from downtown Flagstaff, climb a nondescript Ponderosa-covered hill, and go play with science instead.

Lowell Observatory's a family affair. It's been privately owned since Percival Lowell built it in search of Martian canals in 1894 - his grandnephew's the current trustee. It's among the oldest observatories in the United States. And it's a fantastic place to experience science and history all in one go.

I've already written about Lowell Observatory's contributions to science. In this edition of Sunday Science, we'll just have a walk around the grounds, get to know some of the quirks and oddities of the place, and get our hands on history. 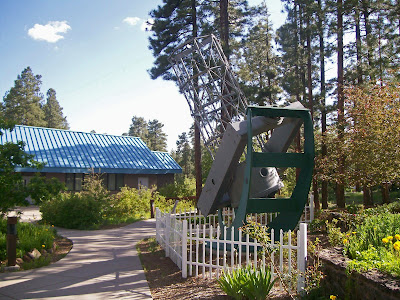 Once you pass through the Visitor's Center, you enter a courtyard surrounded by venerable old buildings. And you'll see something that looks like a sculpture of a telescope. It's a work of art, all right, but it's the real deal - the 42-inch reflecting telescope built by Alvin Clark & Sons. Lowell wanted a reflector for planetary observations, and he certainly got it. The 11-ton giant was installed in a dome in 1909, and remained in active use until the late 1960s, when it was replaced by a new 42-inch reflector made of low-expansion glass, installed at Anderson Mesa.

Dr. Slipher used it for spectroscopic studies for about two years; his brother Earl used it to take Kodachrome photographs of the planets (I did mention Lowell's a family affair, right?). But for the majority of its working life, it was C.O. Lampland's baby. Dr. Lampland used it to take over 10,000 pictures of spiral nebulae (later discovered to be galaxies), star clusters and star fields. He and colleague W. W. Coblentz used the telescope to measure the surface temperatures of Mars, Venus and other planets - their work helped establish that Mars has a very thin atmosphere indeed. And after Pluto's discovery, Dr. Lampland aimed this telescope at it and got accurate positions for it, essential in determining its orbit.

All this happened, of course, before the poor reflector got retired and chucked out of its dome to serve as a work of astronomical art.

Look at it in relation to the Visitor's Center behind it, and realize one thing: it is huge. Very, very huge. Staring at things very far away requires big equipment. 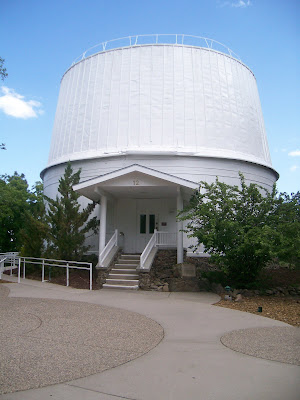 And big equipment requires big domes. This is the home sweet home of the 24-inch Clark Telescope. This is the centerpiece of the Observatory. It dominates Mars Hill. It acts like a gravity well: you make little circular motions trying save it for later, but you spiral closer and closer until you finally just give up and make a beeline for it. There's a reason why the Observatory tour guides usually take you there first.

On clear nights, a long line of folks snakes out of the building, down the steps and out into the courtyard, waiting for their turn to gaze through the eyepiece at the cosmos. On the night we went, they had the Clark aimed at the Moon. You have not truly experienced our nearest cosmic neighbor until you've viewed it through the lens of a large telescope - the mountains and craters pop out in vivid relief, starkly outlined along the edge against the blackness of space. The Moon's brilliant white glow, dimmed by dark maria, so clear and sharp you feel you could step through and touch it, fills your vision. It's tough to pull yourself away and let the next visitor take their turn. But there's plenty to look at even when you're not looking through the telescope. 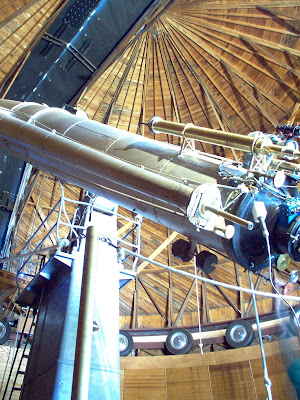 The dome alone weighs 8 tons. The walls and supports are soft golden pine, giving the telescope's home the feel of a no-frills pioneer's house. And yes, those are truck tires up there. The dome is rolled about on one particular variety of tire - 1954 Ford pickup tires, to be precise. They do a better job and make a lot less noise than the old iron wheels in use before. Of course, every once in a while, one of them pops with a gawdawful bang, and they're not fancy, but when you're a privately-owned observatory that has the choice between spending scarce funds on fancy-schmancy extras and funneling those funds into the really essential stuff, you put up with the occasional blown tire.

And if you're the proud owner of some extra 1954 Ford pickup truck tires, there are some folks at the Observatory who'd like to have a chat with you.

But truck tires aren't the most amusing improvisation in the dome. Follow the arrow in the next photo and see if you can identify the lens cap for the guide telescope on the side of the refractor: 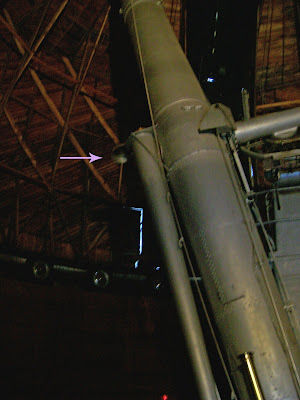 Why, yes, indeed, it is Mrs. Lowell's frying pan. She'd just gotten a new set when Mr. Lowell needed a lens cap and discovered that a frying pan is precisely the right size and shape to get the job done. Needless to say, she wasn't exactly thrilled when she discovered where her new pan had got to.

For your entertainment, the guide will show you the cover. It settles over the lens of the guide scope with a satisfying culinary bang. 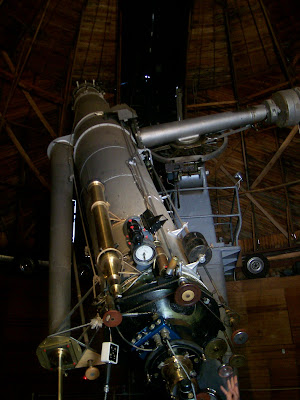 The Clark itself is a bit more sophisticated. The instrumentation is the real deal, not pieces cobbled together from kitchens and cars. It's made of rolled steel, weighing in at a slim 6 tons, and is 32 feet long. It's so well-mounted that you can move it with a touch. Lowell hooked spectrographic equipment up to it in 1901. Lowell used it as his primary instrument in his Martian investigations; V.M. Slipher employed it to measure the redshifts of galaxies, giving him one of the first looks at the expanding universe.

The Clark's been in use since 1896. It started its career in Mexico, where Lowell had it erected in December of 1896 that provided a better view of the opposition of Mars. It came home to Mars Hill shortly afterward. Its main function today is to give visitors an astronomer's-eye view of the cosmos. There's something particularly thrilling about stepping up and looking through the same instrument used by famous astronomers like Lowell and Slipher. If you get the chance, you really must experience it for yourself. 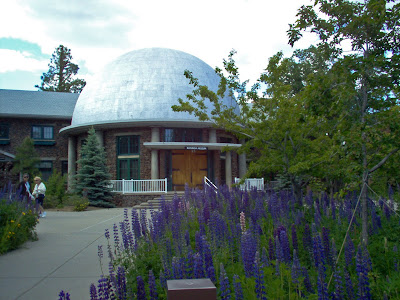 Then head on over to the Rotunda Museum for a look at history. It's in the Slipher Building's Rotunda Library. The building's fascinating for its architecture as well as its science - it was most likely designed by Percival and Constance Lowell themselves. The dome was intended to resemble Saturn, with a thin balustrade standing in for the rings. The balustrade never happened, but the dome certainly did. They aligned the building with the spring and autumn equinoxes for an extra astronomical touch.

Mrs. Lowell did a hell of a job with the interior. She designed a large "arts and crafts" fireplace on the north wall (it's arts-and-crafts the way a painting is a doodle), and she ordered the stained glass light fixture in the shape of - what else? Saturn: 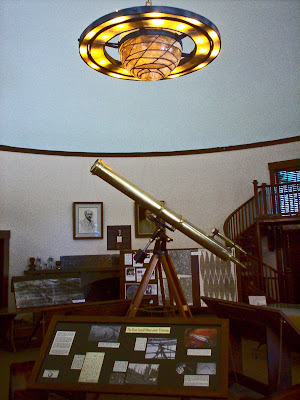 Note the graceful spiral staircases, the elegant library circling the open second floor, the windows inviting in all that gleaming Arizona sun: 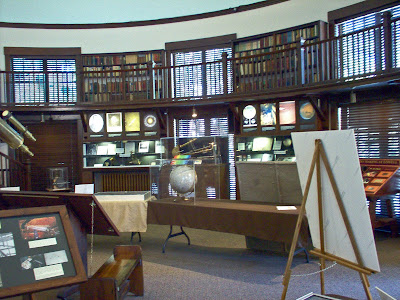 And then keep in mind that this was designed and built as an office building. They knew how to marry form, function and sophistication back in the early 20th Century, didn't they just?

It's all crowded with relics, as you can see from the above photos. When you visit, you'll get a chance to see Percival Lowell's first telescope, a 2.25 inch brass beauty his mother gave him on his 15th birthday: 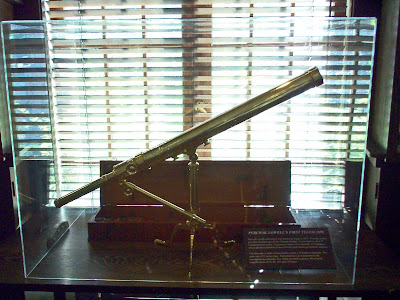 From such gifts, life paths are chosen.

Among the displays, you'll get to see Clyde Tombaugh's log of observations. The photo below shows his log book of the plates from 1930, wherein Pluto was revealed: 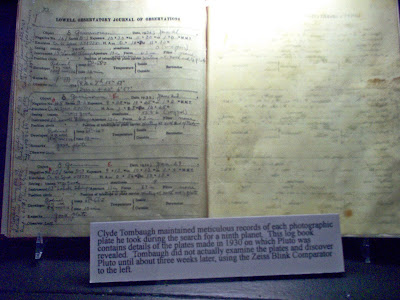 And the equipment he used to make those plates: 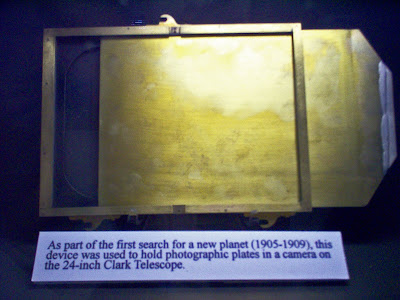 Pretty intriguing stuff. If you've ever wondered how astronomers managed to make important discoveries pre-computerized equipment, this is an excellent place to learn. You'll see examples of all sorts of equipment that did the job before the silicon chip was even dreamt of. 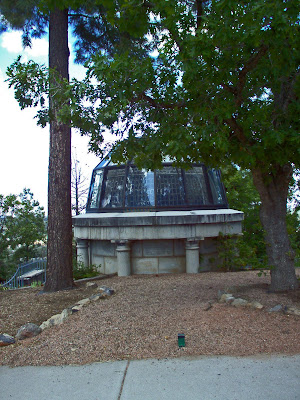 Lowell himself never got to see Pluto's discovery, or even enjoy his sunny new office in the Slipher Building. He died in 1916. But he got to stick around. Mrs. Lowell had a massively expensive mausoleum built for him, complete with cobalt tiles and Italian building stone. She also decided that her share of the will wasn't quite enough, and so she went to court to obtain the rest. The ensuing legal battle ate half of the Observatory's $2.3 million inheritance, and to this day, you'll still hear Mrs. Lowell blamed for the Observatory's every financial woe.

So it goes. Families are messy things, and they sometimes tear themselves apart. Mrs. Lowell lost her fight and faded from the scene. The science went on while Lowell lay sleeping. Pluto got discovered, which has given them lasting fame even after the poor "planet" got demoted. Today, Lowell Observatory's much more than Mars hill - there's it's Anderson Mesa facility, where important projects like the Little Things Survey and Local Group Survey are in full swing. And by 2011, the Discovery Channel Telescope will be online in Happy Jack. The Observatory's thriving, and at least everybody got an interesting Mausoleum out of the bargain.

It could've been worse.

Although Lowell was grossly mistaken about the markings on Mars, his theories inspired generations of scientists, engineers, writers and filmmakers. He also was wrong about Planet X, yet his calculations led to the discovery of Pluto. Sometimes that's the way science works.

That is indeed. Percival Lowell left one hell of a legacy. And if you get a chance to go see it for yourselves, you'll see the inspiration he left for future astronomers, not only in the work and the equipment he left behind, but in his own words, which you'll find on his Mausoleum wall: 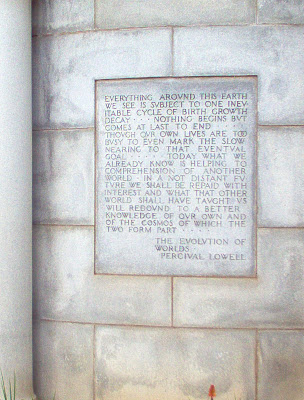 That, at the end of the day, is just what science is all about.

For descriptions of the telescopes and a history of Lowell, see V.M. Slipher's own article in Publications of the Astronomical Society of the Pacific. There's also useful information in this rough draft of the article "The Telescopes of Lowell Observatory."

A good photo tour with fun snippets can be found here. A 360-degree tour for those who can't make it to Arizona is available here.

The architecture and history of the Slipher Building can be found in this Historic American Building Survey by the National Park Service (.pdf).
Posted by Dana Hunter at 2:01 AM

Boy does that ever take me back (almost 50 years now!) to my first telescope - a little 6" reflector I got for Christmas. I can still remember taking it out back that evening, in the snow, and trying it out. Really, all it did was make the little specks of light into bigger ones. But to my mind I was peering into the furthest reaches of the universe... Which reminds me now of Walt Wittman's magic lines:

...How soon unaccountable I became tired and sick,
Till rising and gliding out I wander'd off by myself,
In the mystical moist night-air, and from time to time,
Look'd up in perfect silence at the stars.