Our adventures at the Seattle Asian Art Museum continue!  In Part I, we wandered about woodblock prints and learned that Japanese painters kicked arse.  I also promised you rocks, and rocks you shall have.  We're leaving Japan for India after the jump.


Imagine leaving the dim light and ocher tones of Fleeting Beauty's rooms, and stepped into a narrow but seemingly vast space, filled with the silvery-gray light filtering in through skylights.  The floor changes from carpet to stone.  And all around you are sculptures snagged from temples in India, Afghanistan and environs.  This, I'm telling you, felt like paradise.  Paper and paint are all well and good, but you know I'm a rockhound.  I spent a long, enchanted time wandering about looking at the various stories in stone.

India's famous for its temples carved in red sandstone, and there was quite a bit of that in evidence here.  One of the better photos I managed to coax out of my camera was of a tree goddess: 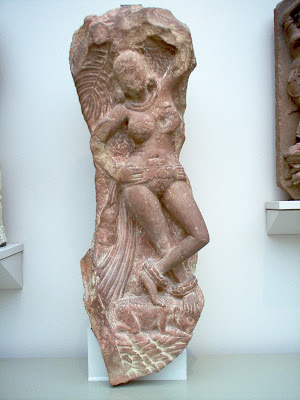 And my intrepid companion got a good one of the Stele of Maha Devi Durga: 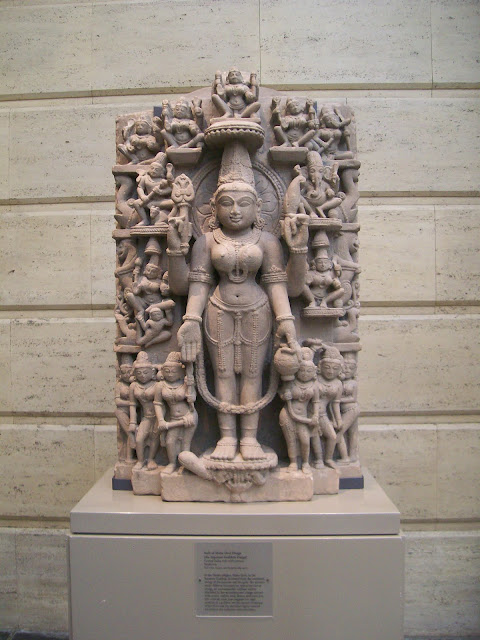 There was quite a bit of paler sandstone, too.  Here's one of my favorites: Shiva Killing the Elephant Demon: 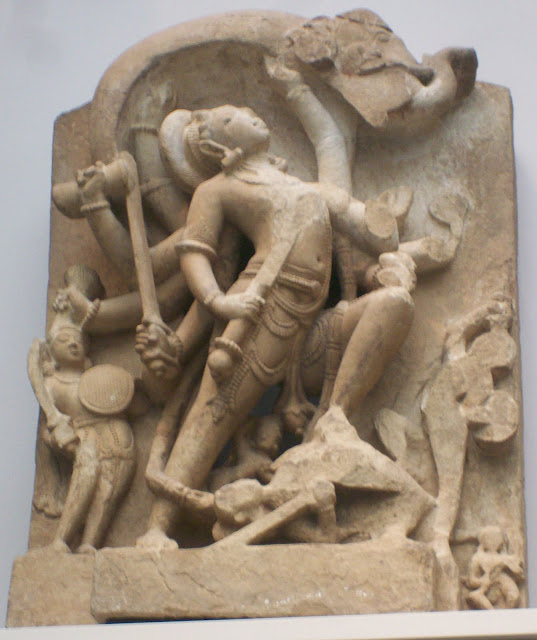 Shiva's one of my favorite gods, actually, so it was rather nice seeing him as something other than Nataraja.  And I've got a soft spot for Ganesha as well, so I was pleased to see him there: 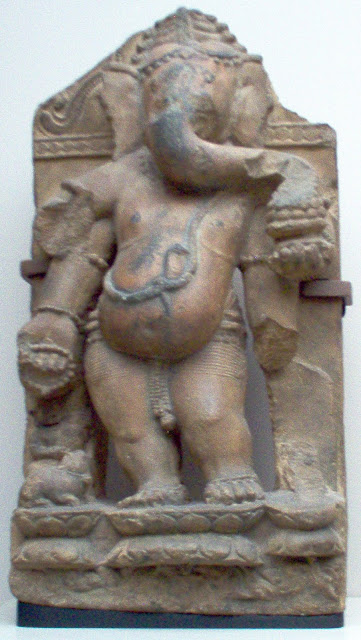 Sandstone wasn't all, not by half.  There was, of course, limestone, such as this section of a pillar from the Amaravati Region: 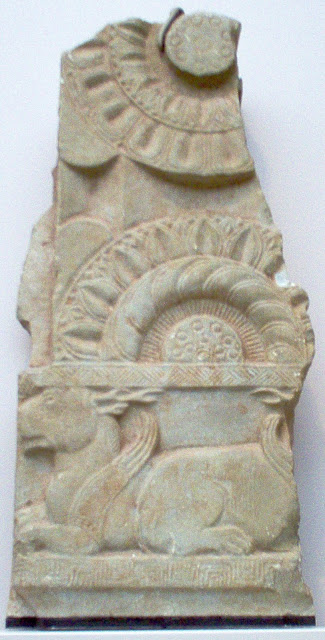 And then we have the marbles.  I particularly enjoyed this Jain Dancing Girl, who should be viewed from the left and a bit below, like so: 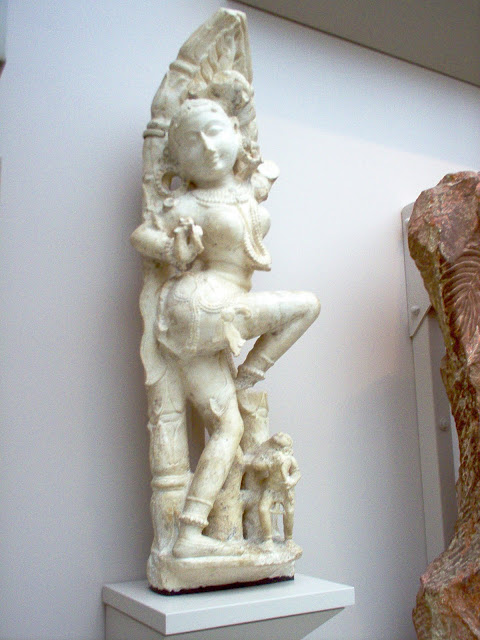 She was enchanting.  My camera didn't capture that, but marble was the right medium for her: she had a glorious glow, and you felt your feet itch standing there as she invited you in to her dance.

A bit more imposing granite Vishnu stood near the back wall: 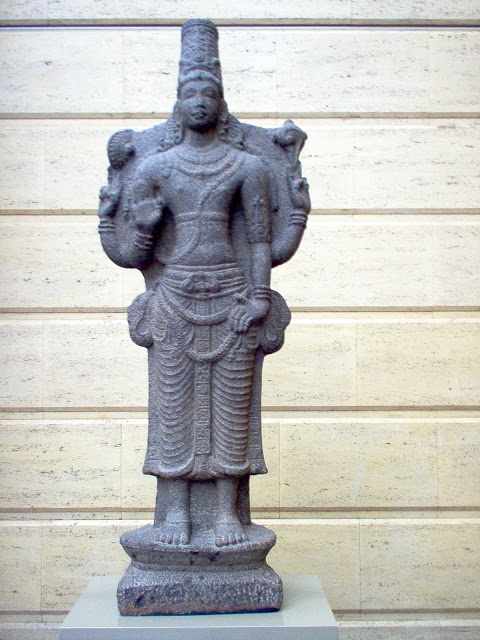 He looks regal and very nearly Egyptian.  Which is rather appropriate, considering he also masquerades as the boar Varaha: 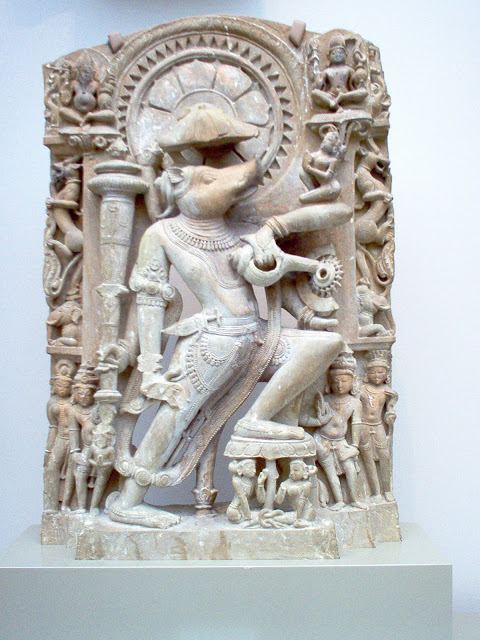 Animal-headed gods seem rather popular, don't they just?  And that's a lovely sandstone, there - I love the variations in color, especially there at the base.

So much for your everyday carving stones.  When you move along to the far wall, you get struck by some unusual bits.  There's this lovely Seated Buddha in black chlorite: 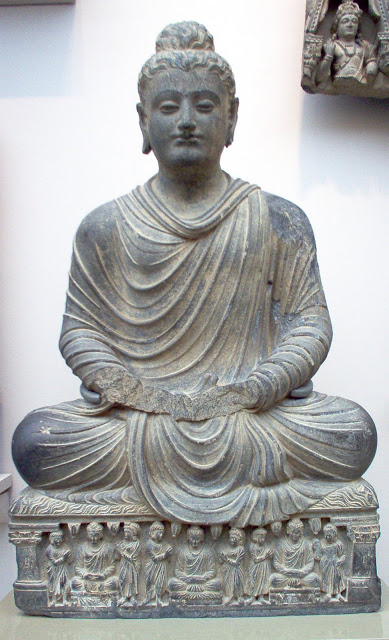 But the ones that truly made my eyes pop were the carvings in schist.  I didn't even know you could usefully carve schist, but apparently there are some varieties that are kind to sculptors.  This Bodhisattva is a particularly lovely example:

Isn't that wonderful? And considering I'm mad for schist, this was a truly awe-inspiring piece of art.

There were bits from a stupa also carved in schist, and in the stupa base one could actually see the foliation in the stone.  Alas, my camera could not, and so showing it to you shall have to wait until I have the spiffy new camera with its marvelous macro mode.  I'll be going back to the museum in a couple of weeks due to the demands of a few friends at work who are mad for art, so I'll capture it then.  All I can say is, the perfect marriage of art, myth and geology made me a very happy Hunter indeed.

And I think that's about enough of that for now.  I'll just leave you with a very striking image of the back wall to give you an idea of the power of that stone art and the way it dominated the room: 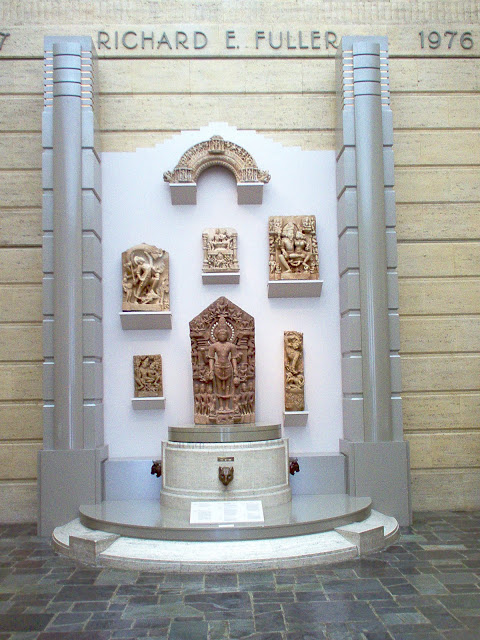 Magnificent, innit?  You can see why I spent a goodly amount of time in there.  It gives a vague idea of just how overwhelming a typical ancient Hindu temple must be.  Remember, those temples don't have a few sculptures arranged hither and thither - they're coated solid with the things.  And they're striking and beautiful, sensual and serene, heroic and humorous, exalted and neighborly.  You can go from whimsy to war to wonder in a heartbeat.  I love how dynamic it all is.

Next, we'll be on to the Chinese galleries, and you'll get to see me very own version of the famous Adam n God scene on the Sistene Chapel.  Shall probably be tomorrow night, but I make no promises, seeing as how me new camera will be here.  Woot!
Posted by Dana Hunter at 3:29 AM