My darlings, I can't say as I regret spending far too much money, time away from the kitty, and neglecting my geological posting responsibilities.  Today was awesome.

We began at the Museum of Flight, where the Collings Foundation had a few of their fighter planes on display.  We got to see the only TP-51C Mustang in existence fly!  We boarded Air Force One and the Concorde.  We met a wonderful World War II veteran who had many stories to tell about his experience as a pilot and prisoner of war.  And we finished up with an afternoon at the Sound.  Hop aboard for photos and video.


The Museum of Flight is enormous, my darlings, and chock full o' goodies both inside and out.  I've been to air museums before, but not like this.  My poor father is getting stuffed on an airplane and hauled up here as soon as we can both get time off work, because kids in candy shops wouldn't even be in it.  He'd be far more ecstatic than that.  Y'see, he's the reason I even give airplanes a second glance today.  He builds model aircraft, up to and including designing his own, and he's been flying nearly as long as I've been alive.  Many happy childhood memories revolve around spending time out at the flying field with the old dad.  I've even flown, briefly and with care, once.  (He claims I'm good at it.  I say that's the kind of thing pop's say sans evidence and refuse to risk an expensive model on my rumored skills.)

So while planes aren't my passion, I do enjoy stints at air museums eyeing the aircraft.  And it was a lovely day for it by Seattle standards.  You'll see plenty of cloud cover, but it was warm and dry, which is all we ask.

Let's start basically where my intrepid companion and I did, which is with the Concorde. 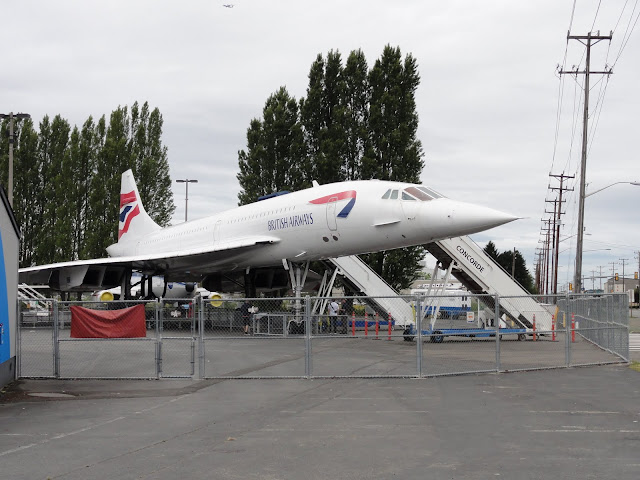 This is one of the planes they let you poke around in.  And it made me realize something about transatlantic flight: if you want supersonic, you'd better be very, very short and skinny.  There's not much room in one of these things: 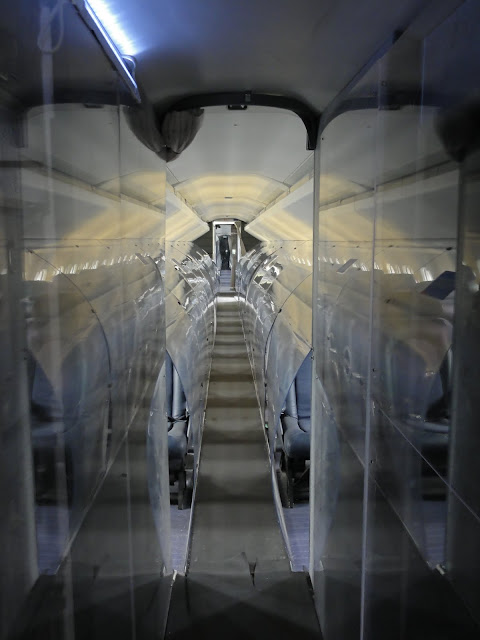 Yes, I know, it's hard to tell with all the Plexiglass, but believe me, without it wouldn't be much of an improvement.  Not even the flight crew got a lot of space: 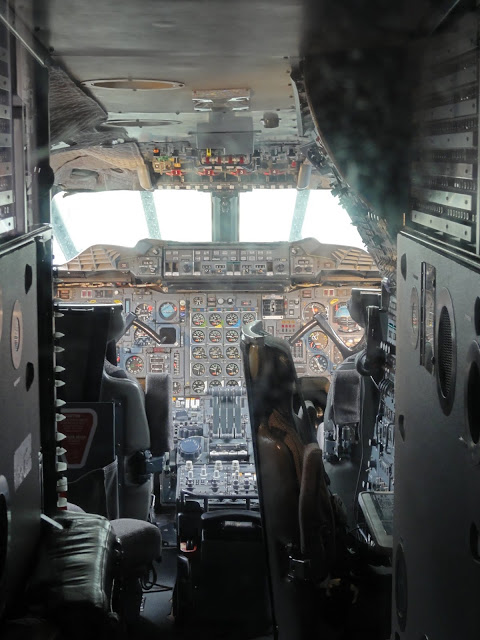 Luckily, folks were stuffed in there like so many salted herrings for only 4 hours or so at worst.  In fact, this plane set the record for an Atlantic crossing at 2 hours, 52 minutes and 59 seconds.  That's bloody fast.  So fast that the aircraft stretched 6-10 inches from heating in supersonic flight.  These and many other fun facts are plastered to placards on Plexiglass all the way down the aisle.

It's rather sad the Concorde's no longer in service.  It's a really lovely plane, with its swept-back wings and slender nose.  And even an inveterate smoker like me can survive a few hours in the air on the way to Europe.

After the Concorde, you can go nose around Air Force One: 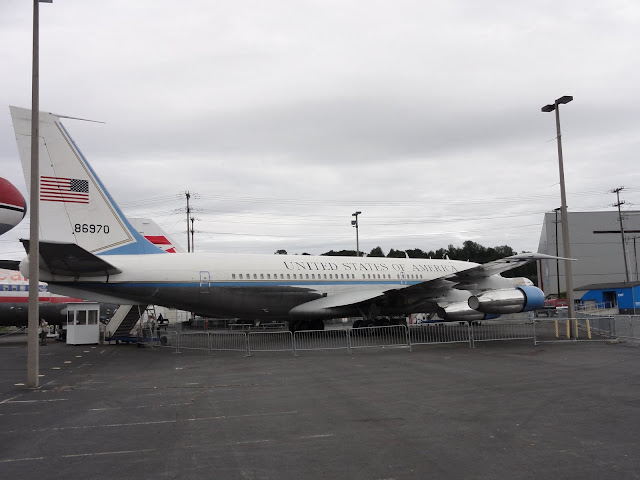 It's actually pretty awesome to wander about in the footsteps of Presidents.  And there are a lot of Presidents to follow around on this plane - it flew everyone from Eisenhower to Johnson, and it was still in service during Nixon's presidency.  Everything was state-of-the-art then, but as you can tell from the secretary station, technology has moved on a bit: 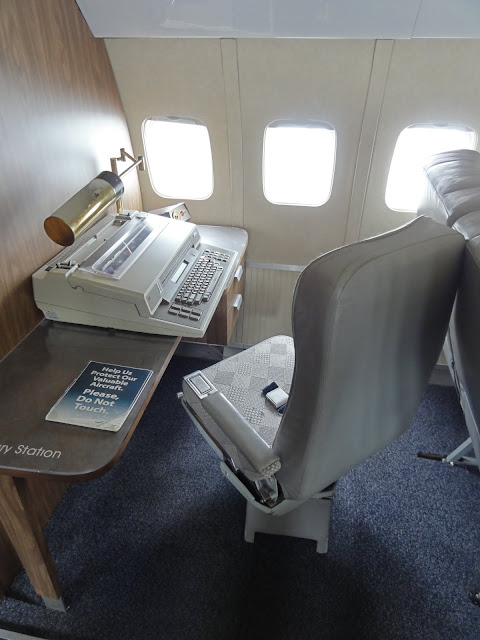 Here's the nerve center, where the President and his staff could sit and discuss whatever needed discussing.  There's a view into the Presidential Stateroom just beyond the conference table: 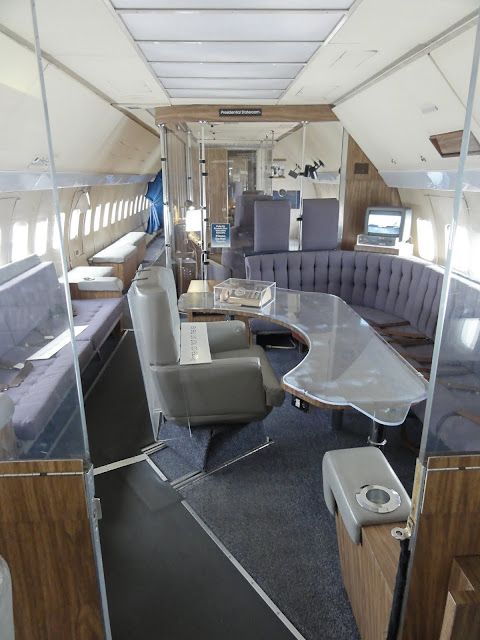 It was hard to get a good shot of the Stateroom itself with all the glare off the plexiglass, but I did me best: 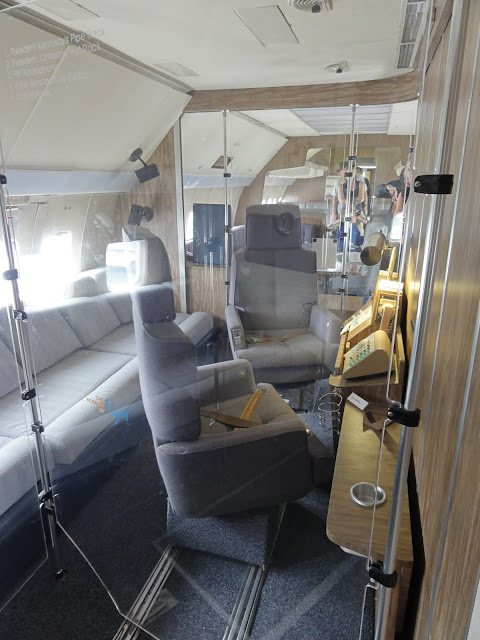 There's an actual doggie door in the door of the Stateroom, too.  No word on cat flaps.


There were a few warning plaques that made me chuckle.  Here's one above a white rotary phone: 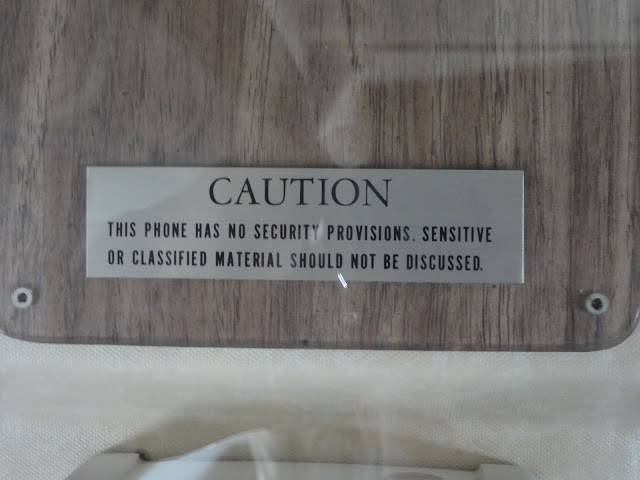 And in case you wondered whose phone it was: 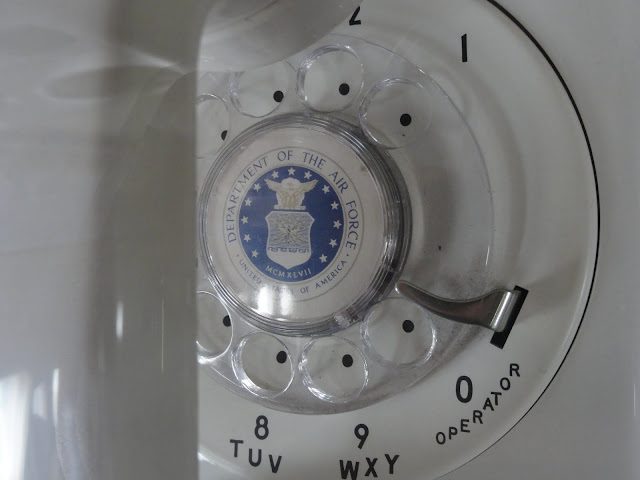 Up front, you could find the actual security phone, and get a good look at the cockpit, which makes all too clear that this plane was flying before computers came standard: 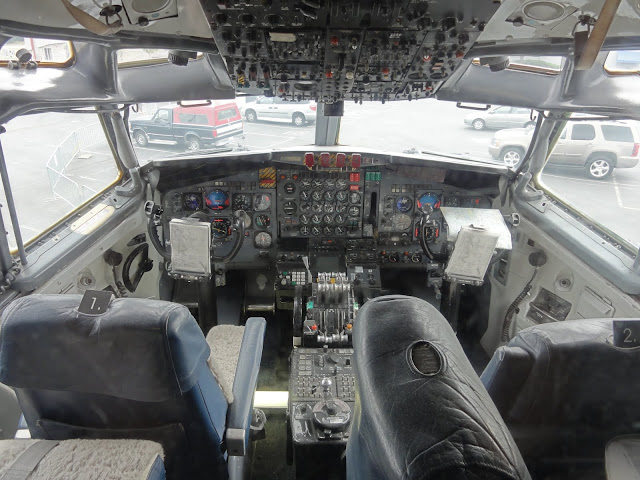 And that was about that for Air Force One.  All in all, very interesting.  Nice to see how the Leader of the Free World flies.


The plane I really wanted to poke around in wasn't accepting visitors, alas.  Who wouldn't want to investigate a Boeing 737 prototype used by NASA? 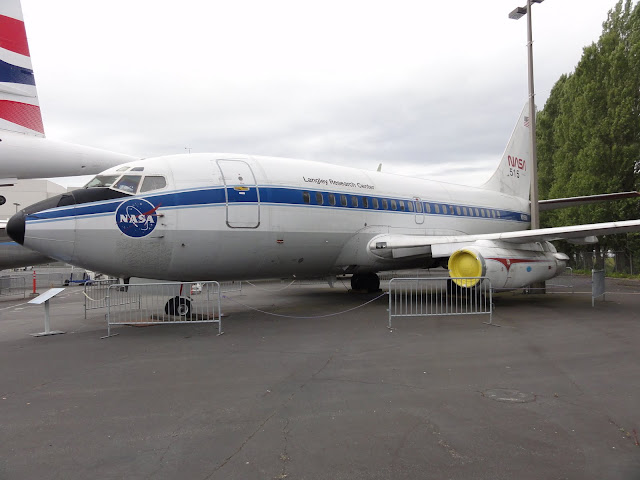 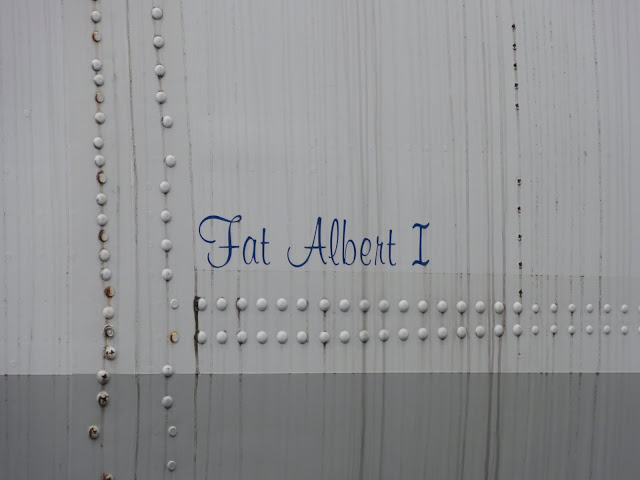 Oh, and that's not dirt up near the nose - it's signatures, I'm assuming from the last group of folks who worked with it: 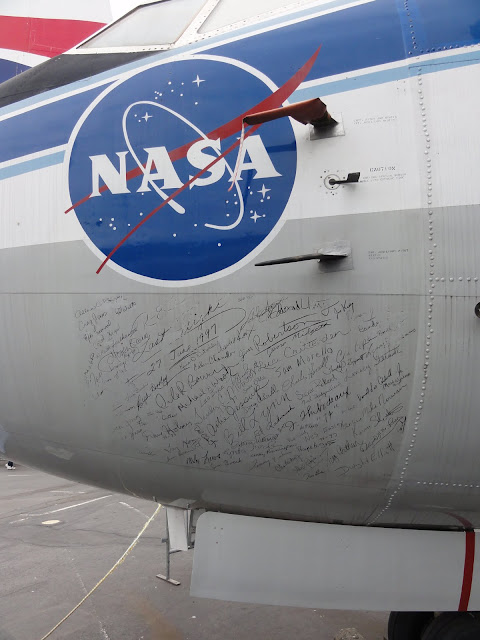 Too awesome, and I loved it muchly.


But time flies, and we soon had to abandon the aircraft in this field for the exhibition planes, lest they fly off without us having seen them.  Unfortunately, to get up-close and personal with them, you had to pay a separate fee.  Since we'd already paid for the Museum and too many souvenirs, we gave that a pass.  I've prodded the innards of warplanes before, anyway.  We just stood back and took some shots through the fence.  Here's their B-17 Flying Fortress: 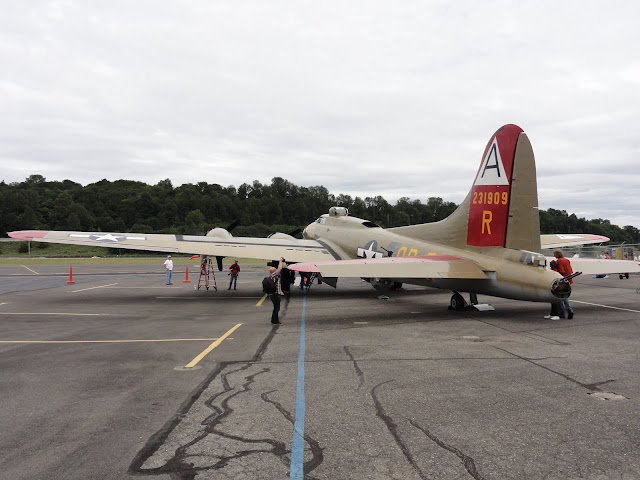 And their B-24 Liberator, currently dressed up as Witchcraft: 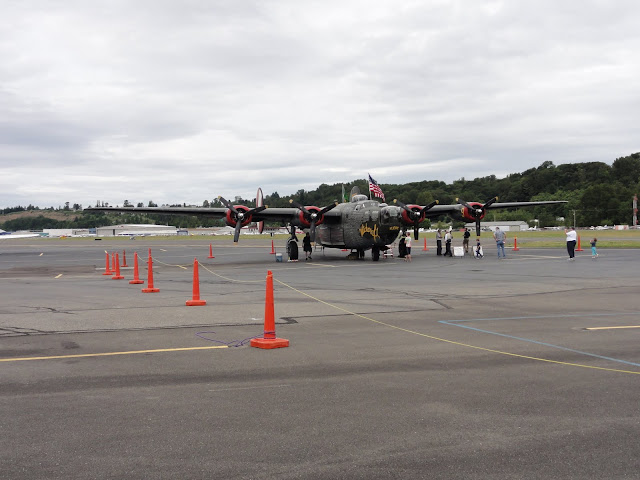 These planes are enormous.  If you've never stood near one, you have no idea.

They had Betty Jane there, too, the only TP-51C Mustang currently flying: 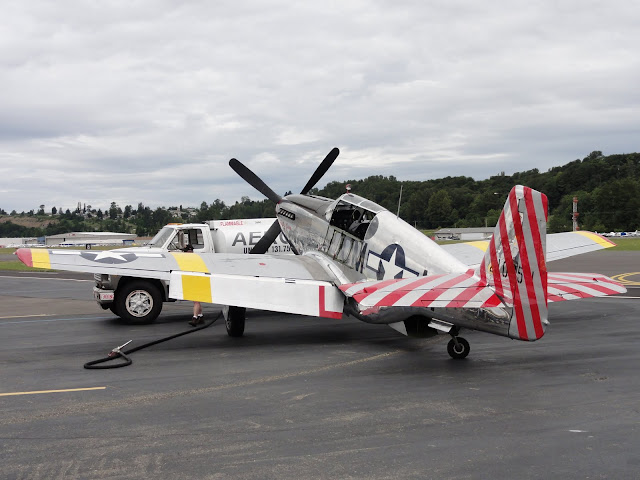 And there she goes!

That, I have to tell you, was amazing.

Olde Thyme Aviation had their AT-6 "Texan" out, too.  And I was in a prime position to catch her coming home from a flight:

I can't even begin to tell you how excited I was.  I mean, standing in the propeller wash!  Outstanding.

As I was wandering along the kiosks set up by the airfield, an old man with a twinkle in his eye called out over the engine noise, "Hey, why don't you take my portrait?"  So I did: 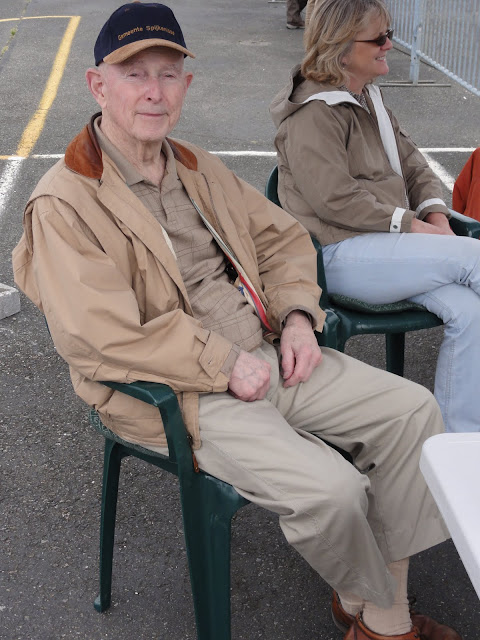 It turns out this is Lt. Col. James H. Keefe Jr., USAF (Ret.).  You can see an interview with him at the Veteran's History Project, or get the book his son wrote about his father's service, Two Gold Coins and a Prayer.  Jim has a lot of stories, some of which he shared with us.  Here he is showing me pictures from the book and telling me the stories behind them: 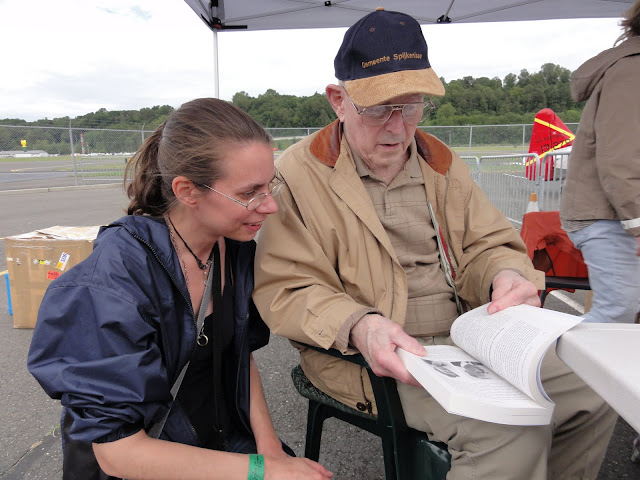 I could have stayed there all day listening to him.  He's had a hell of an interesting life, and he's one of a vanishing breed.  It is good to shake the hand of a vintage American hero, a man who nearly died in Hitler's POW camps.  I got a signed copy of the book for my dad, who is another vintage American hero.  I wish he'd been here to meet Jim.  The two of them would have had plenty to talk about.  Different wars, different branches of the service, different experiences, but war is war no matter where or when it's fought.

After that, going to the beach was almost an anti-climax, so we'll end here for now.  Besides, this is enough multi-media for one day.  I'll post photos of the interesting rocks I found that were too heavy to carry home, the best piece of driftwood in the Northwest, and some gorgeous scenery tomorrow.  There's even a bit of Bellevue sunset, which I captured on the drive home.  So much to look forward to, right?  It'll be up after I've done my long-promised Parte the First in ye olde Oregon Geology series. 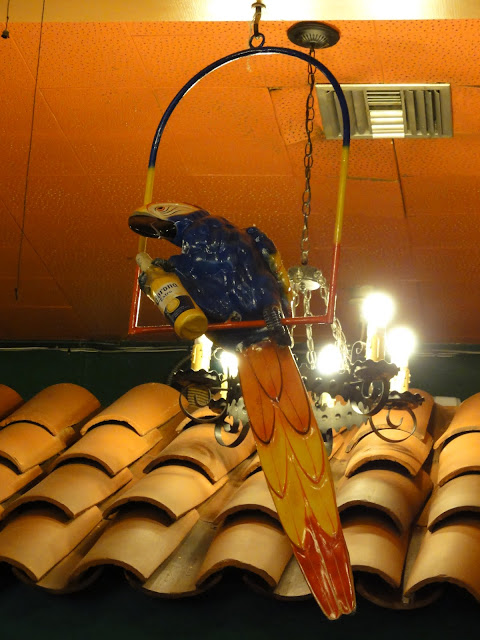 Makes Mexican dining a surreal experience, I'm here to tell you.  That's from La Costa in Burien, should you ever wish to visit him yourself.  And speaking of Mexican, I have got some leftovers begging my attention.  Adios!
Posted by Dana Hunter at 1:59 AM

Thanks for the great photos! You're obviously having lots of fun with that camera. I've been to several airshows and air museums, and they never fail to fill me with awe.