Summer's for playing, and of course on the summer solstice, you've gotta get out and enjoy the fine weather.  In Seattle, thick cloud cover with almost no wind and zero rain qualifies.  So my intrepid companion and I headed out for Richmond Beach.  Cuz there's trains, y'see.  And beach.  And rockhounding opportunities.

I picked up a few: 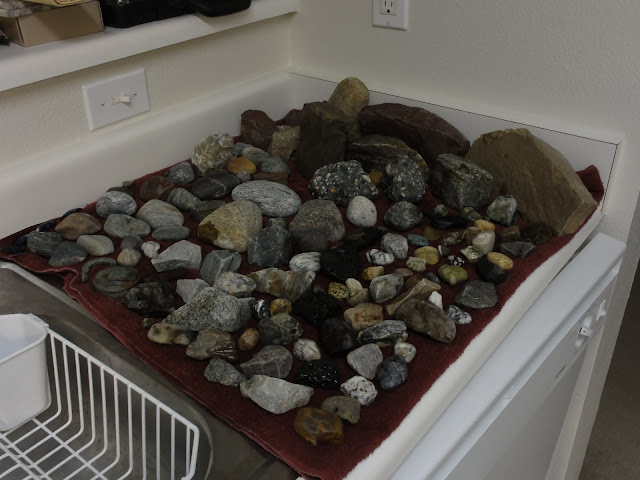 There's petrified wood and conglomerates and sandstones and granite and chert and all kinds of other things, and once I've got some good lighting and they're all dry, I'll probably be snapping a few macro shots and writing up a missive or two on them.

Join me after the jump for some views of the Sound, trains, and geology!


Richmond Beach climbs down hillsides to the Sound, giving you some breathtaking views on the way down if you park in the upper level parking lots: 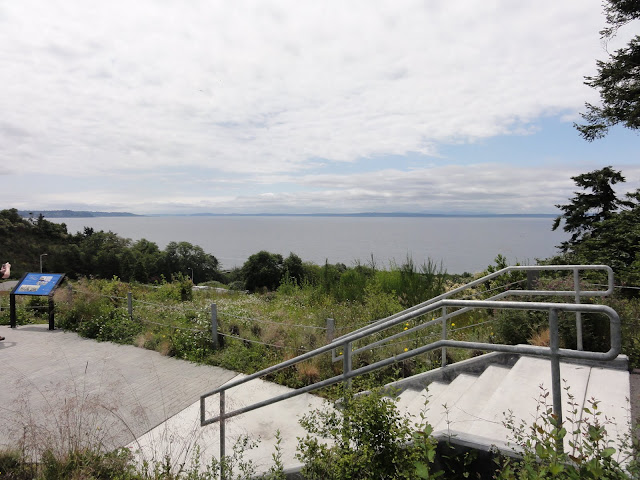 Warning: do not park in the upper decks if you're an out-of-shape rockhound.  I learned this the hard way.

On the way down, we passed many pretty flowers with many busy bees.  I'm proud of this one: 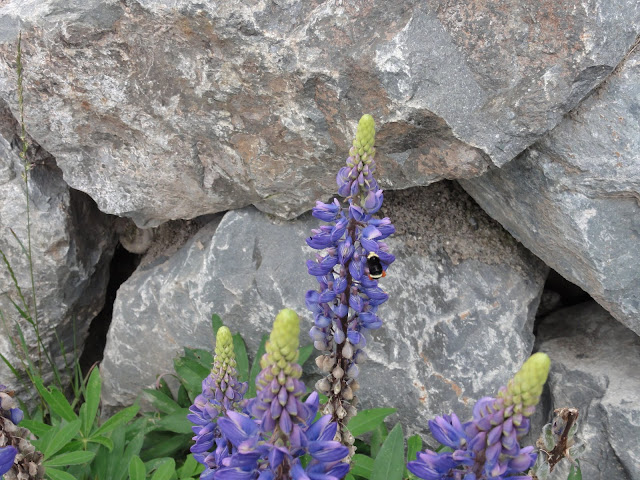 There wasn't much wind, but enough to fly a kite: 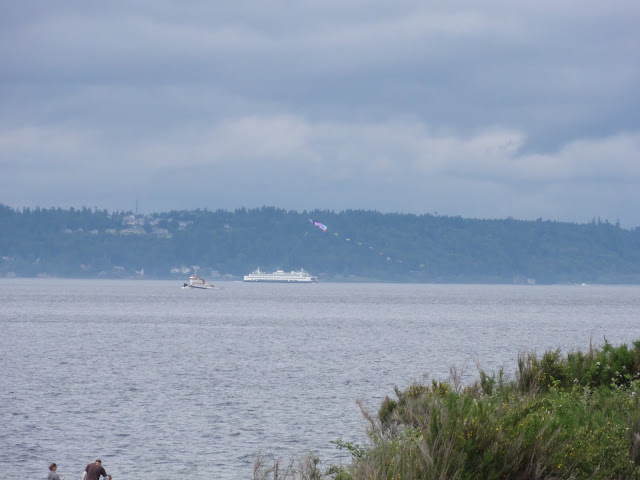 Perspective's fun!  It makes it look like the boats are the ones flying the kite, but it was actually a bloke on the beach.

Lovely breaking waves were bringing things like rocks, shells, and seaweed up for us: 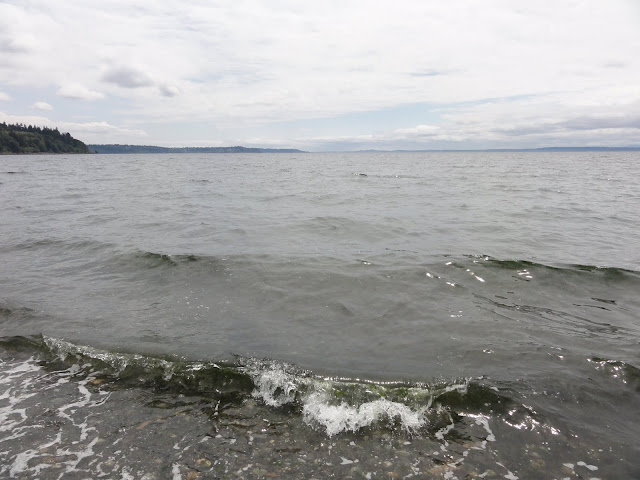 Look off in the distance there, at the low hills around the Sound.  If I remember my geology rightly, most of the Sound is carved or deposited by glaciers, so you're looking at a lovely scene created by vast sheets of ice.  None of this existed in this form until ice got done molding, scraping, and moraining.  Neat, eh?

Our luck was in as far as rain went, but out as far as trains.  Before we'd finished climbing down the hill, two had passed.  By the time we reached the bridge, none.  For over an hour, no trains.  So we hauled our starving butts back up the bluff, and found a lovely piece of the bluff on the way.  I was already hauling ten thousand pounds of rocks, but we stopped to collect this bit as well - a piece of delicately-layered sandstone that's just barely lithified, and crumbles like beach sand if firm pressure's applied: 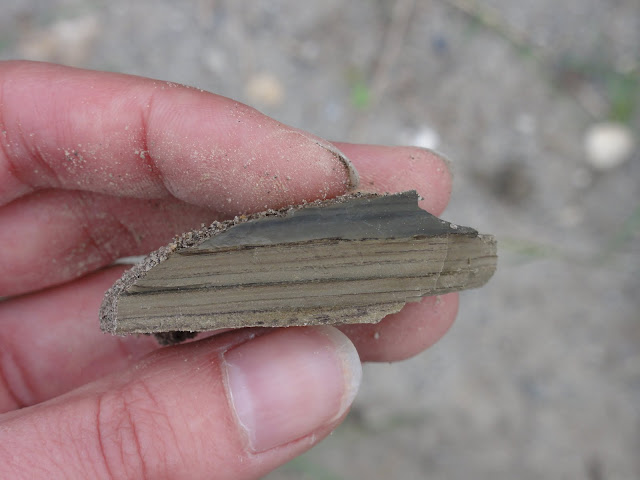 And I discovered my camera does love poppies: 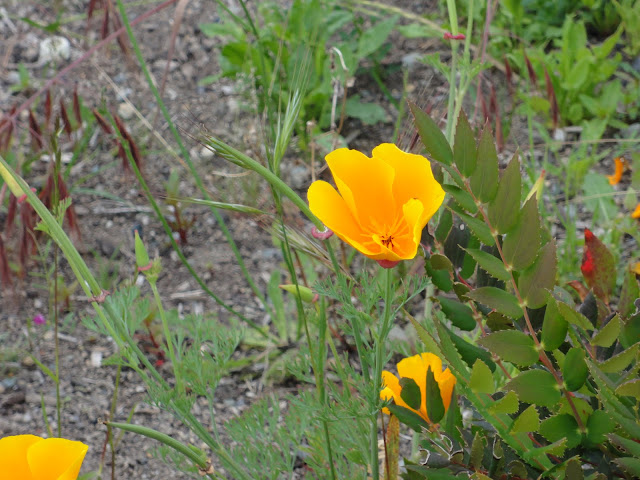 Not bad for a one-handed shot whilst holding ten tons of rocks.

We had some delicious burgers at Richmond Beach Grill House, and since it was too late in the day to head down to the Seattle Aquarium and molest sea mammals, we decided we'd return to Richmond Beach and hunt trains instead.  But first, a view of the Sound and a wonderful tree: 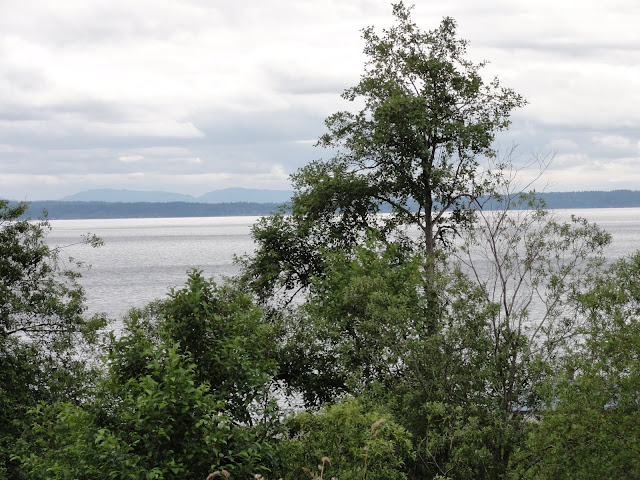 And stop again for the Sound and a sailboat: 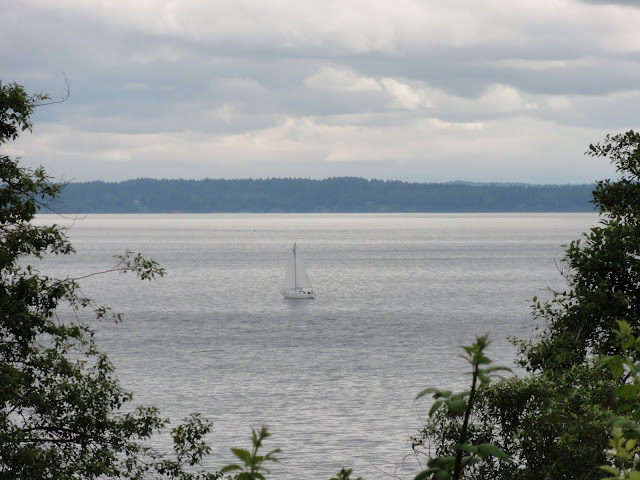 We got lucky with the trains.  The Sounder came through, and then a BNSF freight train, passing right beneath us on the bridge.  Here it comes! 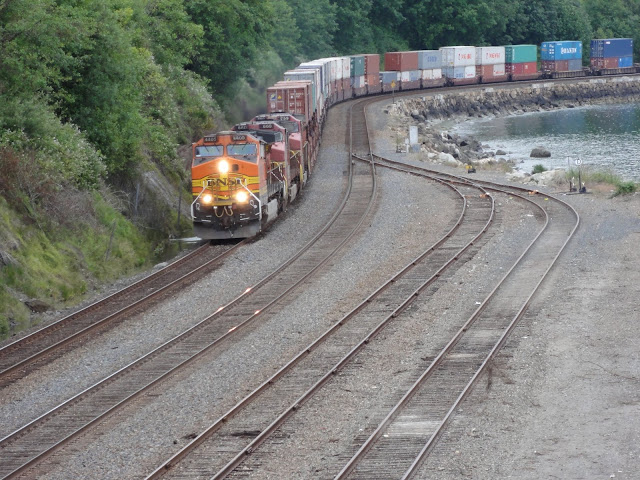 Take especial note of the switch on the tracks.  This will be important come the video later.

Up on the bridge, there's a chain link fence, where a spider has taken up residence in one of the links: 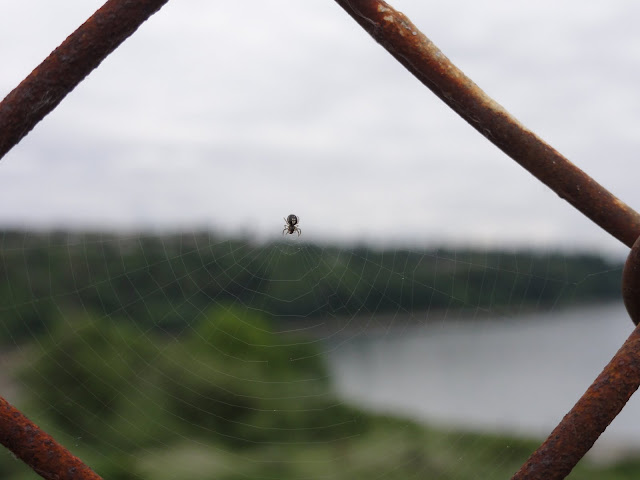 After trains and spiders, we were ready to go to the birds: 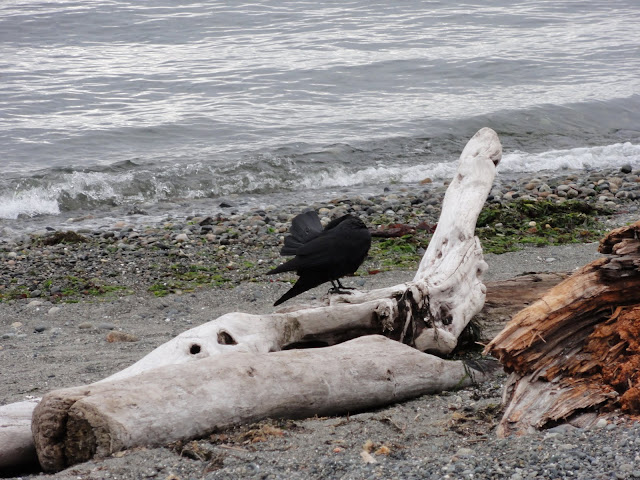 Too awesome!  And here's a friend of his: 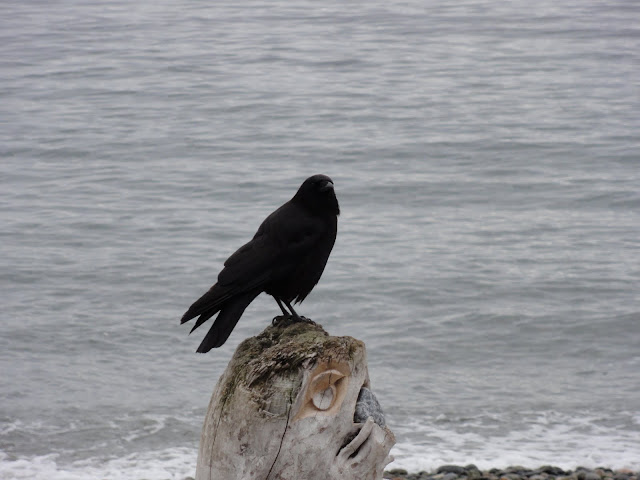 I especially love the knothole that looks like a seashell, there.  Yay, interesting driftwood and posing birds! 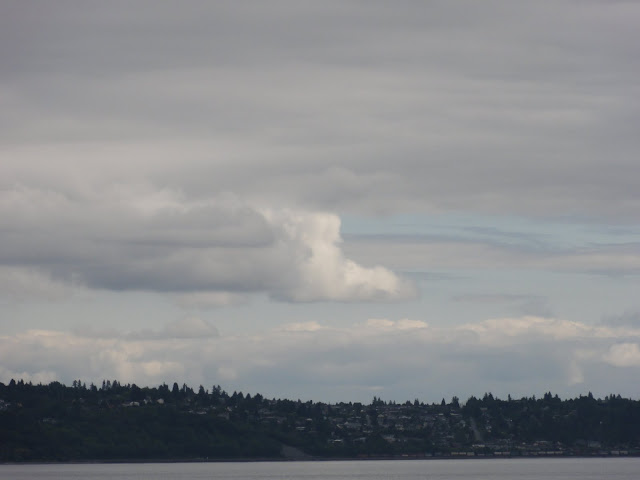 Clouds are just too much fun.

We headed down the beach towards the switch in the tracks, and found a huge jelly on the way: 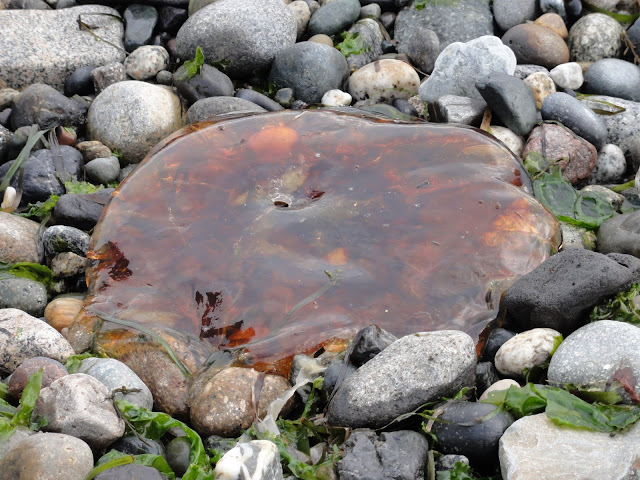 And look at all the lovely rocks!

Speaking of rocks, we soon came to the railway embankment where it meets the Sound, and here it's protected by boulders.  We passed by the usual ginormous chunks of granite and basalt that you find in such embankments all over Seattle, but then there was a strange, dark pink stone, and when we came closer, you could probably hear me squeal all the way down the beach:  Ripple marks!!! 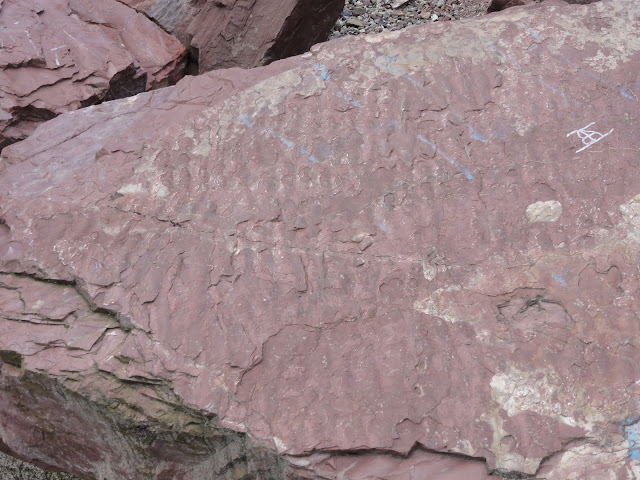 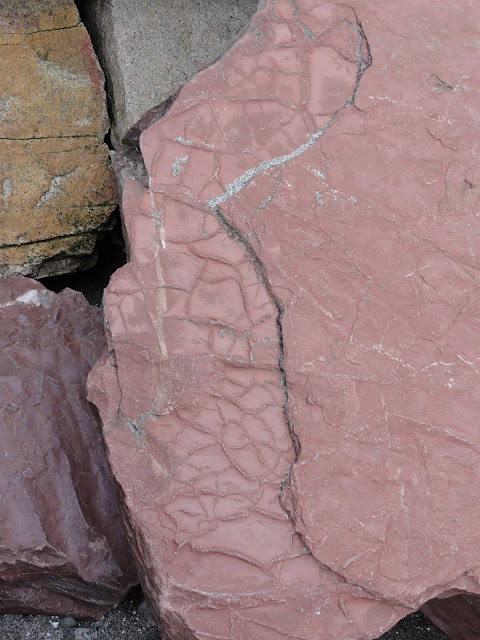 And mudcracks that were later filled in by a different sediment! 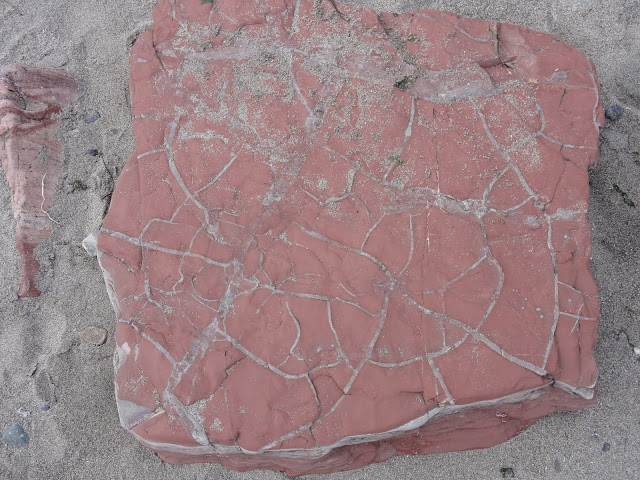 Here's a different view of the same boulder, showing the bedding planes: 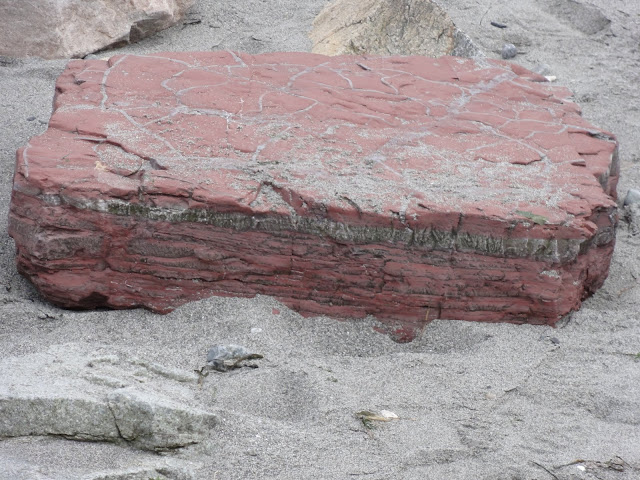 If I remember my geology rightly, the color, texture and interesting features of these rocks speaks to them having formed in a delta or tidal flat sort of area, where rivers are wending their way toward the sea, and the climate was warmer than Seattle's is now.  Rivers would deposit their sediments on broad plains, where those sediments would dry out, crack, and then more sediment would preserve those cracks; elsewhere, the same thing happened with the lovely ripples formed by running water, recording the ebbs and flows of water from millions of years ago.  They're extremely hard sandstone, probably similar to the red sandstone used in so many Indian temples.  Where they came from, I have no idea.  They wouldn't have been hauled far.  Puget Sound has a history I've got to learn more about!

So up the sandstones I scrambled, finding some smaller bits broken off by the Sound in its more violent moods, and then I sat down near the tracks for some fun with self-portraitry while my intrepid companion played near the tracks: 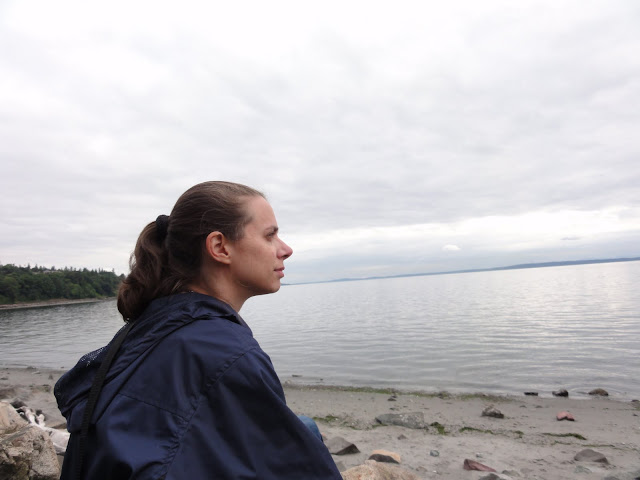 And we were just about to leave when we saw a freight train winding its way around the Sound, and got ourselves set to capture it up-close and personal.  Huzzah, high-def video!

And with that, we'd accomplished all we'd set out to do.  So we headed off to the Kirkland sunset, enjoyed whilst waiting for our Indian food order: 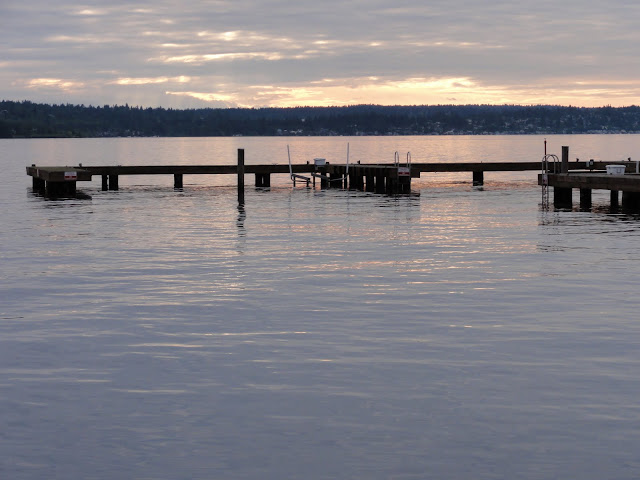 Then home to munch, watch train videos on the teevee, and wash rocks.  Lots and lots of rocks.  But hey - at least I didn't have to gut fish like the gentleman beside me there: 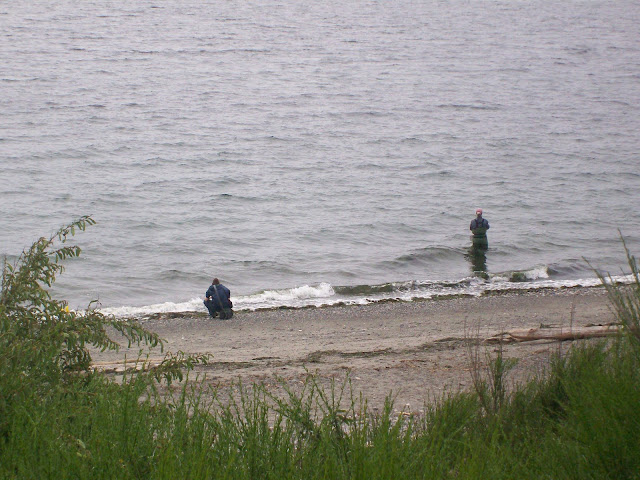 A special note to two of my readers: dearest Nicole, you'd best plan to spend about a month here, because I keep finding more and more for us to do!  And Karen, my darling, I promise I'll get you your Oregon geology ASAP!  By Wednesday at the latest.  There, we can haz deadline!
Posted by Dana Hunter at 3:09 AM

Oh, the sedimentologist in me is singing! Thank you, Dana!