To the Asshole Who Couldn't Be Bothered to Douse a Campfire

You deserve to be tied to one of the Ponderosa pines in the path of your fire.

My stepmother forwarded me some photos taken of the Schultz Fire.  It's horrific. 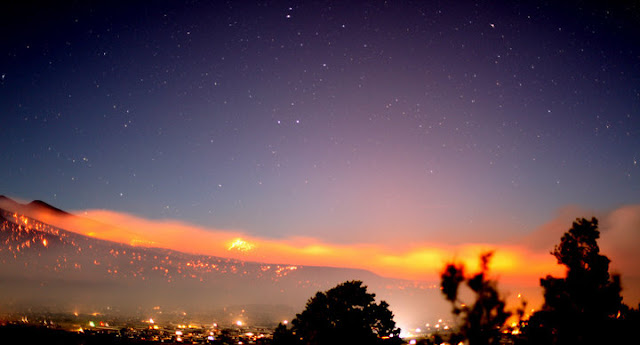 This is the area where the fire reportedly started.  It used to look like this before some fucktard decided he or she didn't need to extinguish a campfire in dry country:

Wayne Ranney has a lot more shots of the fire at Earthly Musings, including a sequence that shows just how incredibly fast these fires blow up in Arizona.  The motherfucker who caused this apparently didn't stop to think about that, even though summer after summer, some other motherfucker's managed to demonstrate the principles of super-dry pine trees + sparks + strong hot summer winds = armageddon.  And for those who believe good Mother Nature will heal all wounds, consider how fucking long it takes to heal on steep slopes in dry country.  Here's Mt. Elden, which suffered a horrific fire in 1977 that nearly took out Flagstaff:

Over thirty years, and you'd think it happened yesterday:

That was another campfire started by a dumbshit, in this case a runaway girl.  Not that age is an excuse anymore.  When I was in elementary school, they showed us the burn site, showed us a film of the fire, and explained just how fucking important it is to stamp out every little spark.  They even told us to crush our smokes, just in case any of us had started smoking at the tender age of 5.  But hey, maybe it's different now.  Maybe the AZ Cons decided we don't need no stinking librul fire-safety education, and little kiddies aren't taught how to avoid burning the forest down anymore.  Maybe the fucktard who left a campfire burning in a tinder-dry wilderness never learned not to play with matches, or never to turn their back on a fire until it's cold and dead.  Maybe the dumbshit didn't have a fucking television and lived locked in a dark, windowless room where they couldn't see the forest burn year after year because of other stupid fucktards.  Maybe there's some kind of excuse.

Or maybe there's just someone who needs to learn that when you play with fire, it's not just the forest that gets burned.  I hope the little shit ends up in prison.
Posted by Dana Hunter at 2:24 AM

A lot of people don't know how to put out a campfire. On our first trip camping, Husband and I left some embers from the previous night in a campfire pit. Fortunately we stopped by the restrooms on the way out and saw a sign that said QUENCH ALL CAMPFIRES, so we went back and poured water on the embers.

Since then we've been very, VERY, careful to quench campfires.