Sigh.  I look now upon the photos I took at SAAM, and mourn the fact I didn't have my Sony Cyber-Shot DSC-HX5V yet.  No detail!  Waaah!

But we'll do well enough to give you an idea of the glories of ancient China.  Please do follow me after the jump for the third and final installment...


I have a confession.  I didn't used to like China.  I mean, I didn't hate it, but I vastly preferred the Japanese in everything from art to language to food.  I still prefer the Japanese language - it's easier to pronounce - but after dipping into Chinese history by way of finding out the Japanese filched a lot of their art and culture from China, I've come to love China very much indeed.  This is where Zen got its start, and where the neo-Taoist Seven Sages of the Bamboo Grove drank and laughed and got up to all sorts of ridiculous nonsense.  I love everything from Chinese architecture to martial arts now, and their history is utterly fascinating.  So it was lovely to have a wander through the Chinese art galleries and see some truly delightful things. 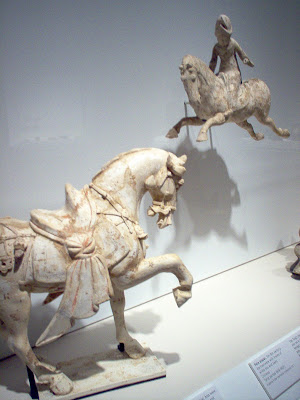 These are from the 7-8th centuries.  I want you to take note of the fact that Chinese artists were doing art so powerfully real that you expect it to leap out of the case and trample you on its gallop out the door long before Europeans had extracted their heads from their Dark Age arses.  Mind you, the Greeks and Romans had also done some spiffy shit, but they were a flash in the pan compared to the length and breadth of Chinese civilization and art.  Something to keep in mind when the "West is the Best" crowd starts preening too much.

Here's a nice detail of the above horse: 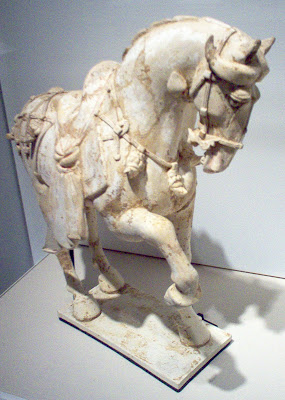 Would've been an even nicer detail if I'd had my Sony Cyber-Shot &c *sob*.  And some of the snuff bottle pictures might've turned out.  I can only describe the incredible level of detail on those fiddly little bottles.  Imagine something that would be swallowed by the palm of your hand.  Now imagine it has, painted on its glass, a perfectly detailed landscape or other such scene, along with writing, and now consider the fact that this virtually microscopic detail was achieved back around the time American colonists decided George had gotten a little too enthusiastic about milking said colonists.  Amazing.  Hopefully, I'll be able to show it to you in a couple of weeks, and then you'll see why I stood enraptured before a wall of snuff bottles.

Some of the cases in the snuff-bottle room were rather wonderfully put together.  Take, for instance, this lovely nephrite (species o' jade, for you non-rock obsessed folk in the audience) Dragon Plaque, which seems to float on air: 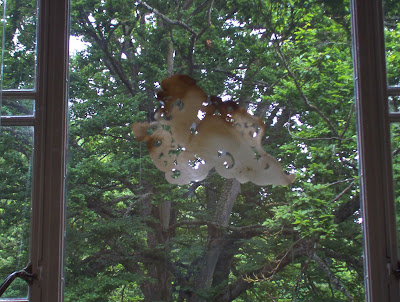 It's suspended on a piece of plexiglass.  Outstanding, especially with the trees outside the window behind it.

Now, I spent a lot of time ogling various and sundry snuff bottles, jade ornaments, and some very finely glazed pottery, but I became utterly enraptured by this incredible wood statue: 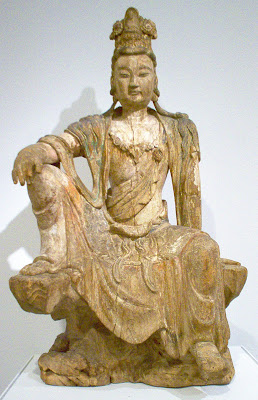 This is a Seated Guaynin, and she's very nearly 1,000 years old.  I wish I could adequately describe the experience of standing in her presence.  Awe and serenity, with a thrill of excitement.  Enthralled, I was.  I inspected every bit of her, and wished I could bury her under lake sediments to be petrified, and thus made just a bit more eternal.  The artist captured her essence perfectly: she's the bodhisattva of compassion, and you feel that standing there with her.  You almost expect her to reach out, pat you on the head, and assure you that the world really isn't as bad as all that, and is in fact quite lovely.

Note her outstretched fingers.  This led to an irresistible impulse, and my intrepid companion was good enough to indulge me.  Thus, we have the Dana Hunter version of the Genesis scene on the Sistene Chapel: 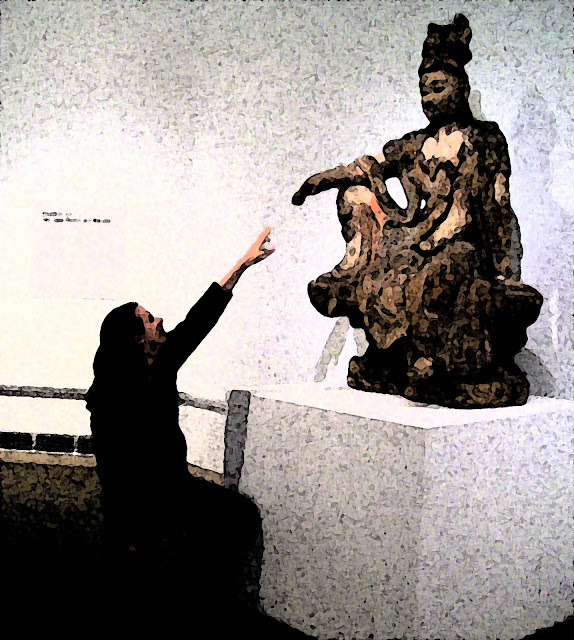 Okay, so it would've worked out better if we could've propped me up in a languid pose on something suitably cloud-like, and my Photoshop skillz are as mad as they could be, but it's still a lot of damned fun.  Here's the original: 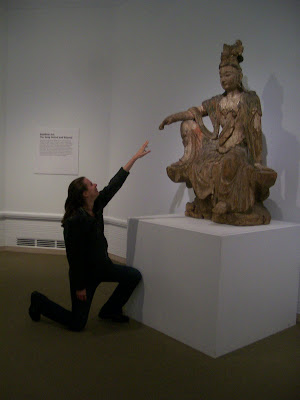 And no, I never did touch her, no matter what it looks like.  Not that I didn't want to....

The last bit of the museum we went through was a gallery of Chinese paintings.  Like the Japanese ones, they were full-length, and set up more like scrolls than what we've come to think of as paintings here in the West.  They're mounted on lovely silk fabrics that are an art all of their own, which is far more interesting than a matting and frame.  Alas, my camera was not up to the task of capturing that kind of detail in that kind of lighting.  But I do have to share this one with you: 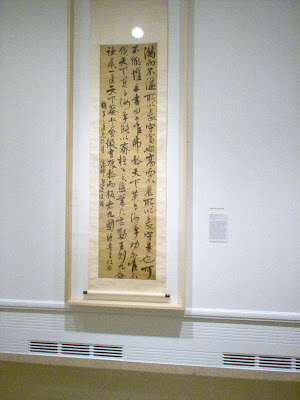 That was a bastard to try to photograph, lemme tell you.  And you may be thinking, well, why go to all the effort?  It's pretty calligraphy, but just calligraphy.

Then you step up and read the sign beside it, which informs you that Song Cao based this wonderful piece on the Letter on the Controversy Over Seating Protocol, which was written back in the 8th century, and consists of Yan Zhenqing bawling a military official out for mucking up the seating arrangements at an imperial audience.  It says,


To fill up without excess is the key to sustain one's wealth; To reach high without peril is key to sustain one's prosperity.  How can one not heed these words?  The Book of Documents says, "If you are modest, people will not compete with you.  When you do not attack anyone, no one will compete with you for resources."  When the prosperous Lord Qi Huangong paid homage to the king, he rallied the support of princes and united the whole empire under his control.  Yet at the meeting of Kuiqiu, Lord Qi's conceited expression led all states to rebel against him.

And Song Cao took that epic dress-down and made it art.  I do so love the Chinese!

Alas, that's pretty much it for the museum.  My intrepid companion and I wandered outside and took some pictures of the lily pond in the rain, where I got a nice one of this fine fellow: 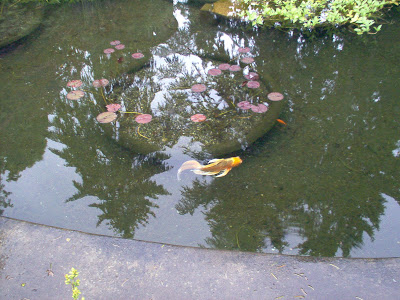 And then we went home, stuffed ourselves with fajitas, and that was that.

One time at a museum I got a chance to watch a team of Buddhist monks just completing a sand mandala. It was indescribably beautiful and complex. Since I was ignorant of the practice, I didn't know at the time they would destroy it almost immediately after completing it. When they did, I was absolutely stunned. Over the years I've come to realize how perfectly this process captures the difference between Eastern and Western spiritualism.

Confucianism and Buddhism certainly strike me as different from Western religion, Chris. Hinduism, OTOH, seems to me to embody many familiar aspects of Western paganism and Old Testament religion. While I was at the SAAM I was struck by differences in the imagery of the Buddhism vs. Hinduism. Buddhist images were about seeking enlightenment, making peoples' lives less painful, and helping the poor. Hindu sculptures were about monsters, gods, and the worship of same.

What's really interesting to me is that Hinduism came after Buddhism. All those gods and "thou shalt nots" appeal to something in human character, that's for sure.