As per usual with field trips, I'm still frantically trying to figure out just what the hell I was photographing, and additionally manage to say something intelligent about it.  I've almost got my shit together enough for the first bit o' Oregon geology, so expect that in the next day or three.  In the meantime, let's amuse ourselves with some photos that have little to do with geology and everything to do with awesome.


A palm tree grows in Oregon: 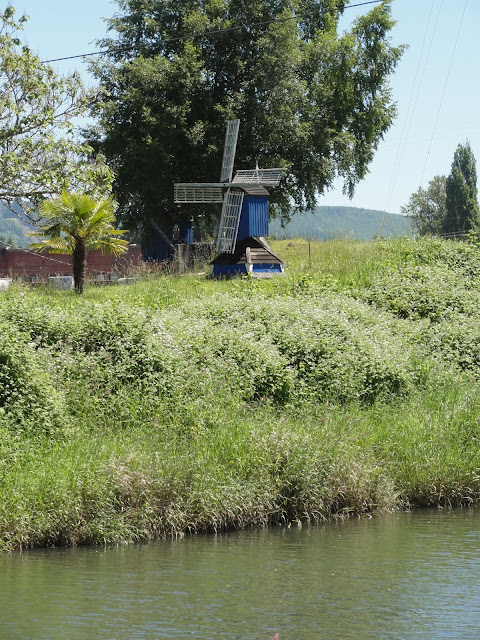 That's from a little town on Hwy. 30 called Clatskanie.  I have to say, being from Arizona, that it's always seemed odd seeing palm trees this far north.  Arizonans tend to think of palms as things that happen only on tropical islands and Phoenix city streets.

On down the road, you hit Astoria, Oregon, where there are sea lions on the Columbia River.  That's right.  Sea lions, river.  We're right by the Pacific Ocean here.  And the sea lions have decided that our docks are their docks.  On one side of the pier, they were kicking up a gawdawful racket, and on the other side, they were sweet and mellow as anything.  Here's the noisy bunch in a rare moment of peace: 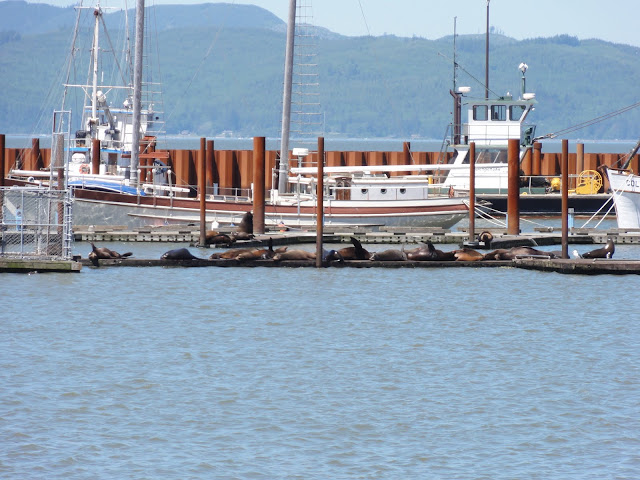 If you embiggen, you can see the guy off to the far left there rolling over for all the world like he wants a tummy rub. 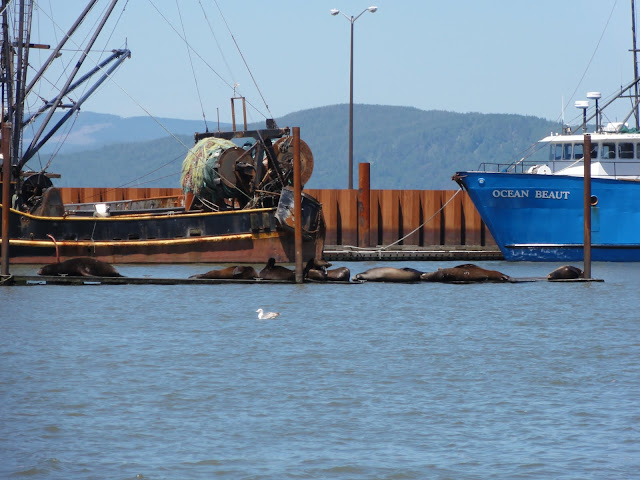 Sweet and mellow as anything, aren't they just?

In Astoria, there's this landmark called Astoria Column.  They claim it is 125 feet tall: 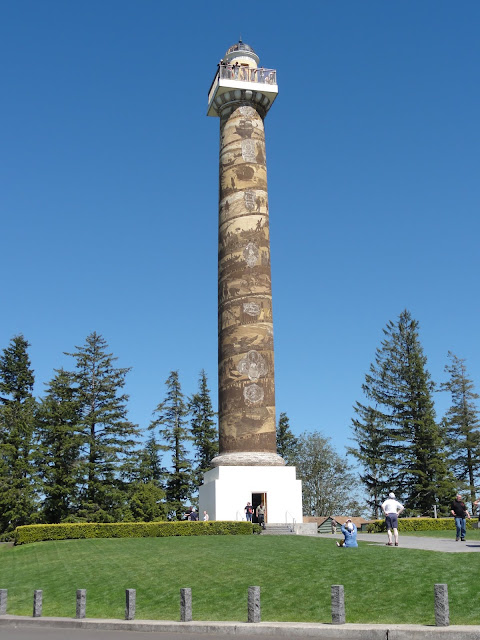 And it looks short enough, until you're walking up 164 tightly-wound metal steps in a narrow cylinder packed together with acrophobic tourists and over-excited kiddies.  Then it seems to be about 20,000 feet tall. 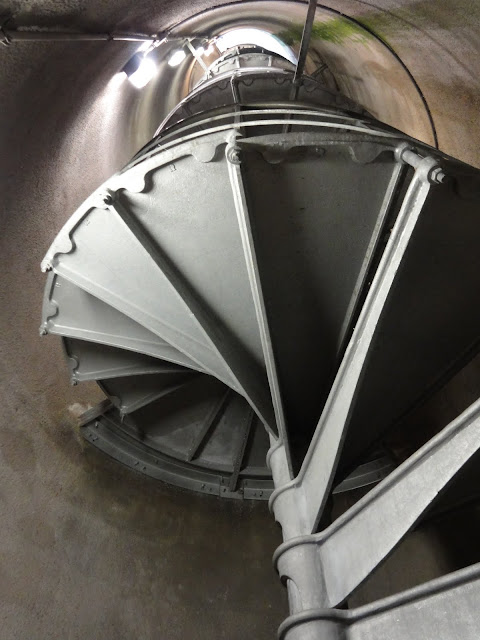 But at least I got to shoot this shot with my super-awesome Handheld Twilight mode, which gives you an idea of what climbing up the inside is like.

Is it worth it, you ask?  Oh, hells, yes.  The views are simply astounding, as one might expect, and I got to play with my 10x optical zoom.  Here's the zoom: 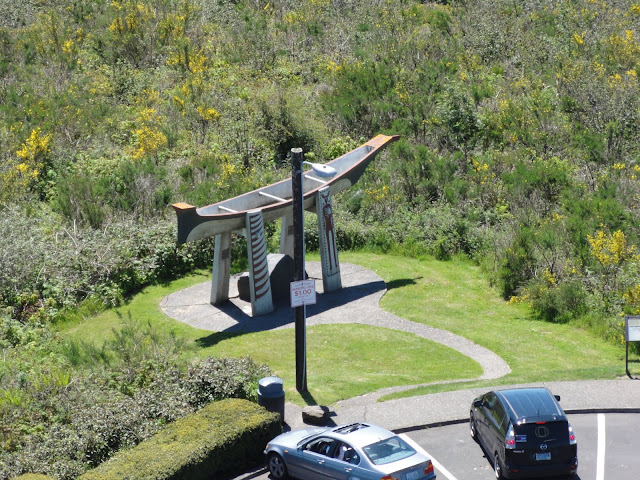 Now see if you can spot the boat without the zoom: 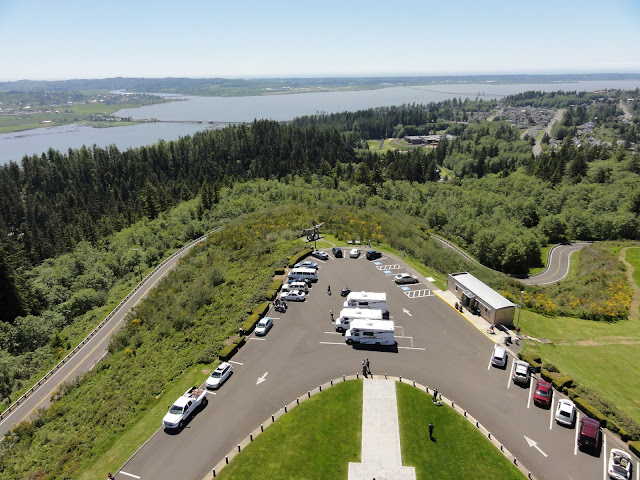 Zoom is teh awesome, my friends.  I tried to ambush my intrepid companion, but he was stuck somewhere on the stairs inside.  'Sokay, I ambushed him at a later stop.

Later on, we ended up at Ecola State Park, where I got to use the optical zoom again in an attempt to capture the Tillamook Lighthouse, all by its lonesome on a little rock: 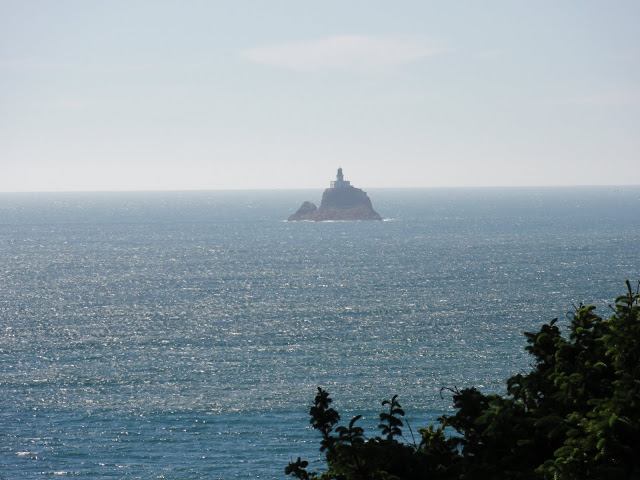 Not bad.  Certainly nothing my old camera would've been able to capture.

And as for macro shots, my camera can do 'em.  Here's one of my favorites from the first day, a thistle at Ecola: 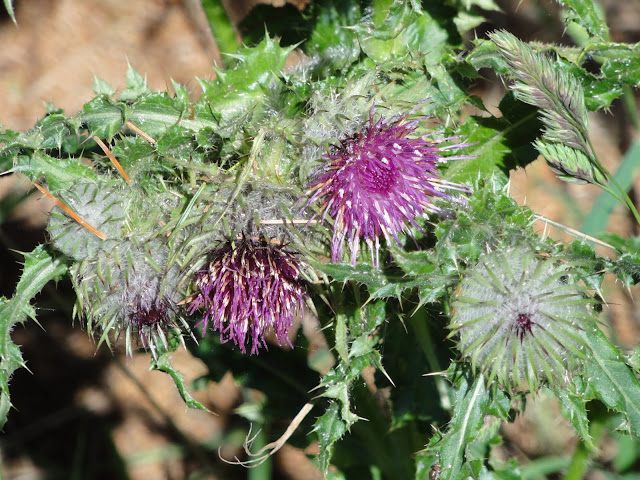 Once I get used to all this camera can do, I might even end up feeling like a real photographer!

We ended our outings for the day at Hug Point, where I got to ambush my intrepid companion: 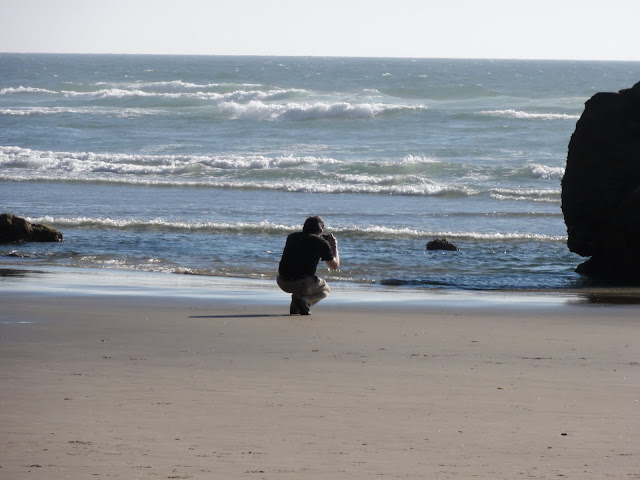 I was up by the waterfall, which is a helluva long ways away from where he is.  Should he give permission, I'll eventually be posting the video I shot of him walking up from the sea, which makes him look rather like a gunslinger in a western.

Appropriate, since it was nearly time for us to ride off into the sunset: 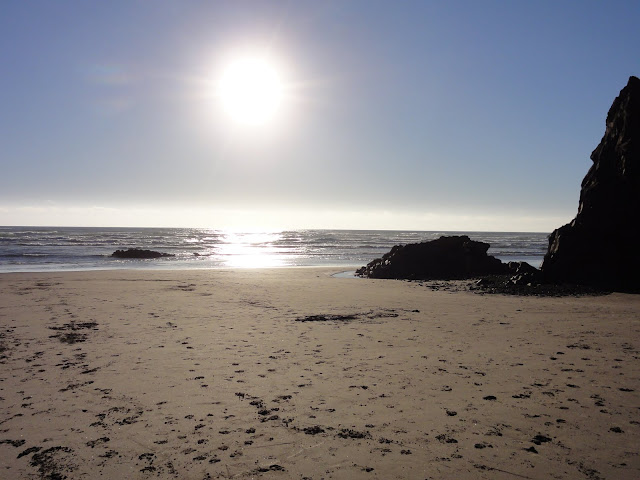 Or at least parallel to it.  And that was one of the many images that nearly made me cry, because on my old camera, that shot would've been nothing but glare with some shadows and sunspots.

Twas off to Seaside, Oregon for us, where we had a delicious prime rib dinner at the Beach Bite whilst our hotel in Lincoln City tried to figure out just how the fuck they'd managed to lose our reservation.  They couldn't make it completely right, as they'd given our suite complete with separate room for moi away, but they at least got us a reasonably-comfortable room and a discount.  However, I don't begrudge the mistake.  Without their error, I wouldn't have been up at the buttcrack o' dawn, and I wouldn't have had so much fun exploring the Lincoln City beaches at sunrise all by me lonesome.  But that's a story for another day.  Right now, dinner's cooking, the sun is setting, dear ol' Dana badly needs a smokie, and while we're at it, let's put the Handheld Twilight mode to work once more: 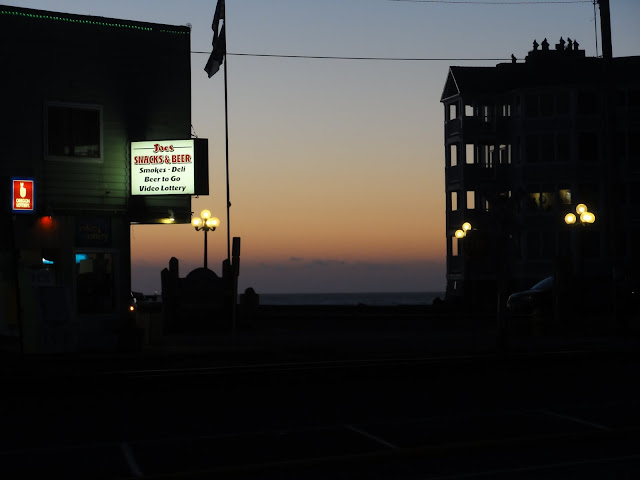 Hot damn! These photos are awesome. What an improvement over the hp.

That Twilight Mode is a really neat trick, technologically. The camera kinda takes two pictures at different exposures, and overlays them to provide detail for different density regions. The CMOS sensor provides outstanding signal-to-noise ratio in the bargain.

I love to see digital cameras finally surpassing film. It would have been damn near impossible to get that lighthouse interior shot on film, and you did it handheld by switching to the appropriate mode. Viva Technology!

What awesome pics! Thank you. Keep them coming (and I'm eagerly awaiting the geology photos!!!).