Well, for all intents and purposes, it was night.  The sun didn't get so much as a peek through the clouds.  Perfect day for visiting SAAM!

I wasn't all that enthusiastic when my intrepid companion proposed it - I'm not a huge museum fan.  Yes, I know they're vital to culture and preservation of masterworks and all that, but I'm one of those people who's very hands-on.  I like to touch, feel, understand things with my skin.  Wandering through just eyeballing stuff doesn't melt my butter.  And the Seattle Asian Art Museum doesn't have stuff you can play with like they do at the Burke Museum.  But hey, they were having an exhibition of Japanese woodblock prints, and considering I'd just plunged headlong into Japanese woodblock prints looking for stuff to enliven my bedroom walls not so long ago, why the hell not?  What else were we going to do in the rain?

Turns out eyeballing Asian art rather does melt my butter.  Perhaps it'll melt yours, too, if you follow me after the jump.


So no shit, there we were in Volunteer Park in one of Seattle's misty summer rains, and what else do you do in a misty summer rain than stand there fiddling with your camera?  There's a water tower to be photographed, damn it! 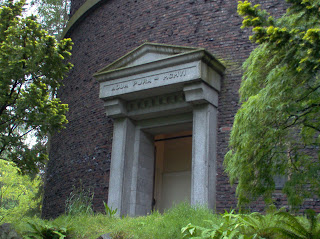 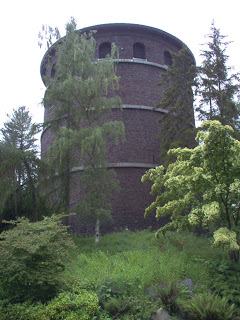 This, btw, looks to be my trusty old HP Photosmart's last hurrah.  I ordered the Sony Cyber-shot DSC-HX5V this evening, after much agonizing.  After five years, it's time for a damned upgrade.

I didn't think the ol' HP would get much of a workout, but it turns out SAAM's pretty amenable to photography.  Even if I'd known that in advance, I'd still have shot the camels, though: 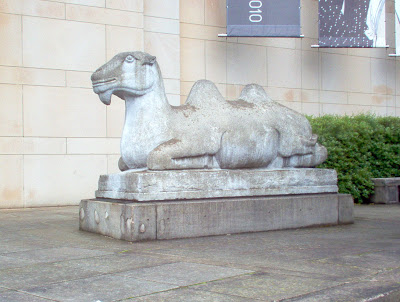 And my intrepid companion likely would've shot me shooting the camels, because that's how we roll: 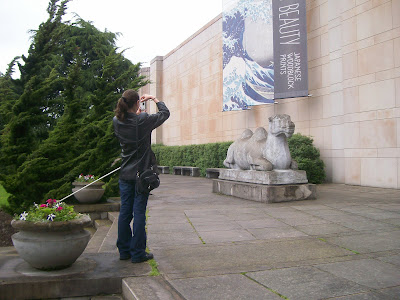 Inside we went, and wandered through rooms whose walls were filled with lovely little prints from the likes of Hiroshige (whom I recognized straightaway - his style's that distinctive) and Hokusai, along with a great many other great artists.  I didn't shoot in those galleries - my camera sucketh mightily at macro in the best of conditions, and the lighting was funky due to the fact that stong, direct light = doom for those fragile prints.  But you can view a slideshow of some of the pieces here, and I'll filch a few others from the toobz for ye as we go along.

One thing I want to mention up front here: you don't know what these look like until you've seen them up close and personal.  The texture of the paper they're on, the colors that have blended so well with the medium and alternately leap or fade, all of it's incredible.  You can see how masterful these men (yes, alas, mostly men) were at this fiddly art.  Like Hiroshige's Travelers Surprised by a Sudden Rain:

The yellows just pop, and then you've got the intimations of rain, so delicately done it's astonishing.  Remember, people, these are woodblock prints.  They aren't a painter delicately dabbling bits of paint on a canvas, with all of the control over consistency and pressure and all that.  And the subtlety doesn't really come across on a screen or on the glossy crap they're usually reproduced on.  The paper's almost like newsprint, and in fact, copies of these woodblock prints were often used as packing material for Japanese ceramics and other art when it was shipped to Europe, which is how the Impressionists got so fascinated by them to begin with.

And I can see why they did.

Hiroshige, of course, is popular and I've always liked him, but one piece in particular grabbed me by the brain and squeezed, and I hadn't even liked it before.  Awa Province, Naruto Whirlpools, really has to be viewed in person to get the full impact:

See those second-rate blues?  On the original print, you drown in them.  They whirl around you in shades of cobalt and indigo and cerulean, more alive than the sea and sky.  That, my darlings, is art: a piece of real life captured and somehow made more real, for all we know it's just ink on paper.  It was phenomenal, and I lingered by it for several minutes before tearing myself away.  In fact, I'll probably go back before the exhibition's over, just so I can drink that sea one last time.

Speaking of the sea....  Now, everybody knows Hokusai's The Great Wave off Kanagawa, but take a moment to enlarge and really look:

Even that image doesn't do the actual print justice.  You're overwhelmed by water, these enormous waves, and those boats struggling with them look tiny, vulnerable, and desperate.  Those poor folks were probably wishing they weren't drinking the sea.

There was plenty of food for the geology buff's soul, too, such as Hiroshige's Lingering Snow on Mt. Hira:

Note the way he suggests the bones of granite with just a few deft lines.  Glorious!

There was a charming series of prints based around a book of poems called Pictures of the Heart, but like an idiot, I didn't write down the artists associated therewith.  After that were galleries full of kabuki actors and courtesans, which I didn't linger in because portraits, even Japanese woodblock portraits, frankly bore me.  I did come across some utterly incredible paintings (and once again, like an idiot, didn't write down the artist).  They were extremely tall, narrow portraits of lovely ladies in lovely kimonos, and I almost walked right on by until the detail painted into those clothes yanked me back.  People go on and on about this or that Western artist's incredible fiddly brushstrokes and lovely colors and so on and so forth, but I guarantee you the vast majority of them couldn't have matched this, and even the masters would've been panting to keep up.  It was extraordinary.  And if I'd had a camera that could do it justice, I'd have taken a lot of close-in shots, but I never would have caught the sparkles in some of the blue paint that you had to have your nose practically pressed to the glass to see.  I had my nose that close because the swirls of brushstrokes that looked like the painter had reduced his brush to just a few thin hairs had me captivated.  It was shocking, how much color and life he managed to get across in such minimal strokes.  Again, that's detail you only see when you're face-to-face.

These courtesans by Ichiryusai Utagawa Toyoharu will give you a very, very vague idea of what I was seeing, about equivalent to standing across the room not really paying any attention:

Now just imagine seeing worlds of detail in the folds of those kimonos, and feeling like you've just been struck by a thunderbolt.

And then, overwhelmed by the mastery of the Japanese, I staggered into a gallery full o' rocks from India - but that's a story for tomorrow night.
Posted by Dana Hunter at 3:53 AM

Beautiful, all of it! I think I'll be dragging Hubby to ye local museum sometime this summer.

This reminds me of visiting the MOMA when the kids were still very young. We had a great time but I had to keep reminding them not to touch anything. Right at the end I saw, out of the corner of my eye, the boys playing on some monkey bars. About 3 security guards rushed over with horrified looks and pulled them off. Oh Hell, the "monkey bars" were actually an exhibit!

Fantastic. It's a pity the courtesans couldn't have come out clearer, but the rest of the pics were wonderful. What a delightful way to spend a day!