But Why Is the Geology Gone?

My intrepid companion and I made a valiant attempt to see the famous Flaming Geyser today.  The first thing that went wrong is that I forgot my camera.  That's right.  Left it sitting right at home, and didn't realize it until I arrived at my IC's house, which is a bloody hour away from mine.

Needless to say, all photos that follow are courtesy of my IC's camera.  Grr.  Argh.  (But I do have to say, while it's no Sony Cyber-Shot, it did its utmost to fill in, and I adore it for that!)

The second thing that went wrong is this: 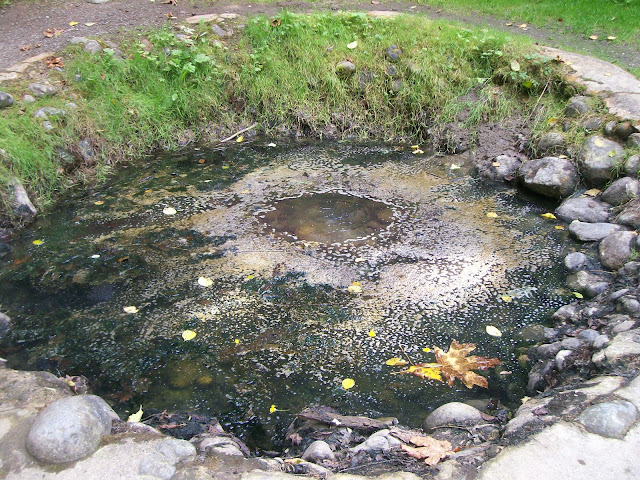 No, that's not the Bubbling Geysers.  That, my darlings, is the Flaming Geyser.

Yeah.  And, adding insult to injury, the route leading to the outcrops of Puget Group Shale and the actually-supposed-to-be-Bubbling Geyser, our only access to good geology in the entire fucking park - closed.  Fenced off.  Unsafe bridge.  No alternate route.

O-kay.  Take stock, here.  See what can be salvaged.  We found a few things. 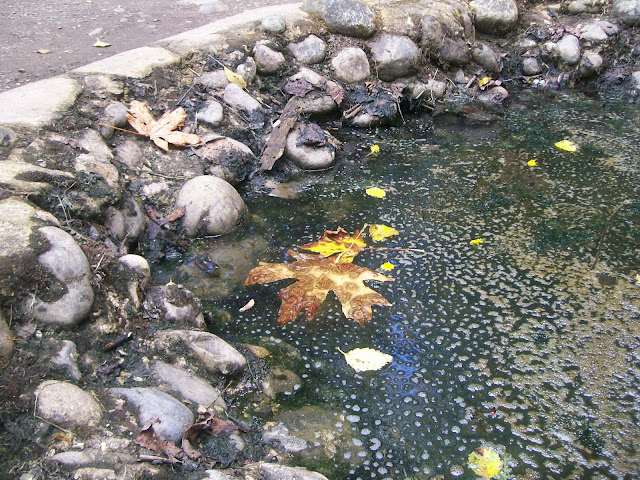 Yup.  That leaf sure is interesting.  Floating in the water there where the fucking Flaming Geyser should be.

I'm not sure what the hell happened to the park's namesake.  The park's website talks about upgrades and repairs and so forth, but not a single bloody word about the fact the Flaming Geyser's drowned in a pool of water. Regardless, this famous little methane seep has a lot to tell us about Washington State's geologic past, so let's have a listen:

Allow me to translate: it's saying that back in the Eocene, the coastline was right about where Puget Sound is now.  Back in them days, floodplains and deltas dumped sediment all over the Black Diamond-Auburn area.  And in the lovely subtropical climate, lots and lots of plants flourished.  Over time, sand and mud buried the flora, more flora grew, bury-grow-bury-grow etc.  Some squishy, some pressure, some crunchy faulting-and-folding, and voila - we have sandstones and shales complete with coal seams and pockets of natural gas.

The pocket that feeds the formerly-Flaming Geyser has been venting ever since 1911, when a gentleman prospecting for coal seams drilled down 1403 feet and got gas.  It used to be quite the sight - up to 15 feet high and 4 feet wide.  Now, alas, it is a shadow of its former self: when not drowned, it can manage a flame of around about a foot.

At least it's still bubbling.  That's something, even if it does remind me of cowboy bubble bath.

Alas, we didn't get to see the shale outcrops, or the Bubbling Geysers caused by carbon dioxide gas, and we caught merely a glimpse of a nice cut in the sediments and till forming the hills around the park: 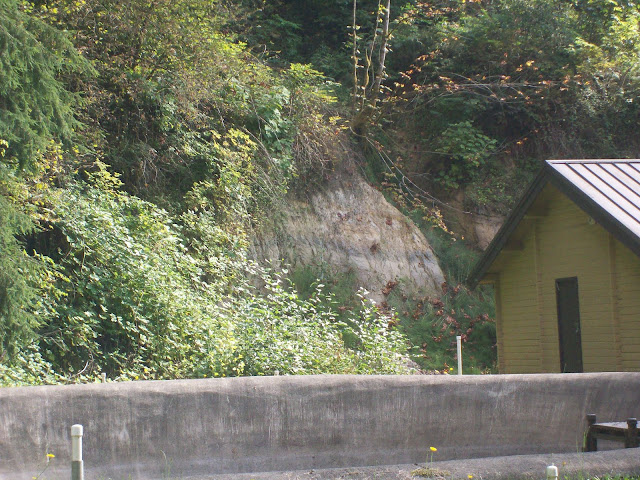 That's it.  That's all we got.  Couldn't even look at the cliff to see what it's made of, because there's bloody Authorized Personnel Only signs everywhere over there.  Argh.

We decided to see if there was a back way on to the trail.  On our way, we discovered that Mother Nature has done some remodeling to the park.  She has, for instance, decided one of the picnic areas could do with a marsh: 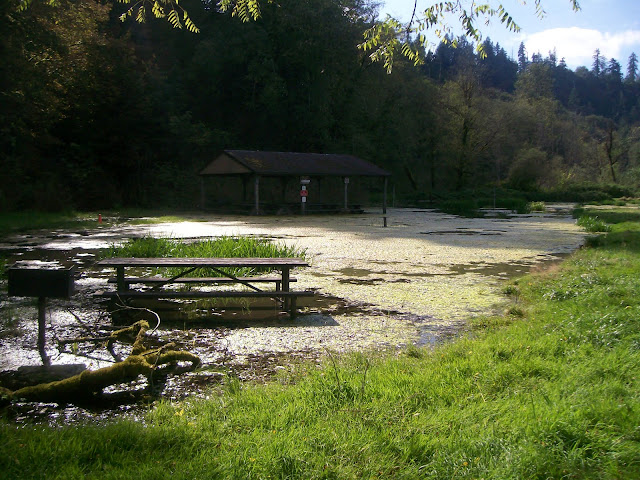 And then we discovered an arm of the marsh sneaks up through the lawn, so you trap yourself in a sort of v-shaped area between a narrow marsh and a wide marsh and have to go round.  As we were walking that way, something jumped from beneath my feet.  Turned out to be the first actual frog I've seen in Washington State: 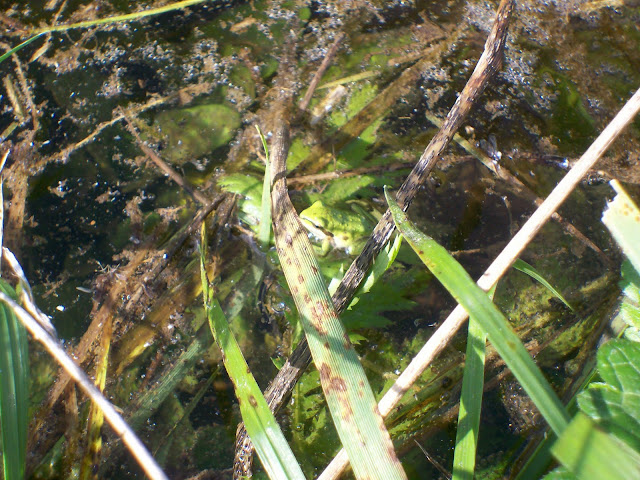 First time I've seen rather than merely heard these little bastards in three years of living here, and it's the day when my camera, with its 10x zoom and its outstanding macro mode, has bloody well been forgotten at home.  There was Language spoken, my darlings.  Then I stuffed my IC's camera back in his hands and decided that, if the camera couldn't go to the frogs, the frogs could go to the camera.  Besides, I haven't caught myself a frog since I was a kid.  I couldn't resist.

The first one was relatively calm about the whole situation: 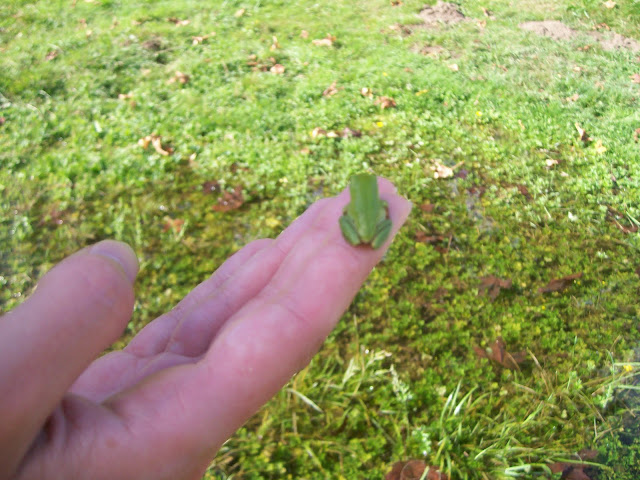 He sat with his dear little toes gripping my finger for quite a while.  Unfortunately, there wasn't enough light for a good shot using my IC's poor camera.  So most of the close-ups came out blurred.  And then my amphibian amigo decided the photo shoot was over and jumped away.

Luckily, we found another, albeit more energetic, subject: 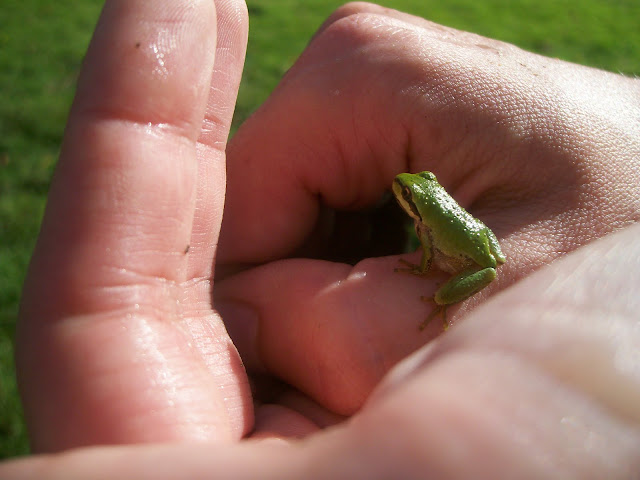 See his dear little toeses?!?  They're covered with little grippy pads, and they feel slightly tacky on your fingers.  So cute!

So that was worthwhile.  Then we climbed a damned hill, and all we found was a single big glacial erratic buried in the till: 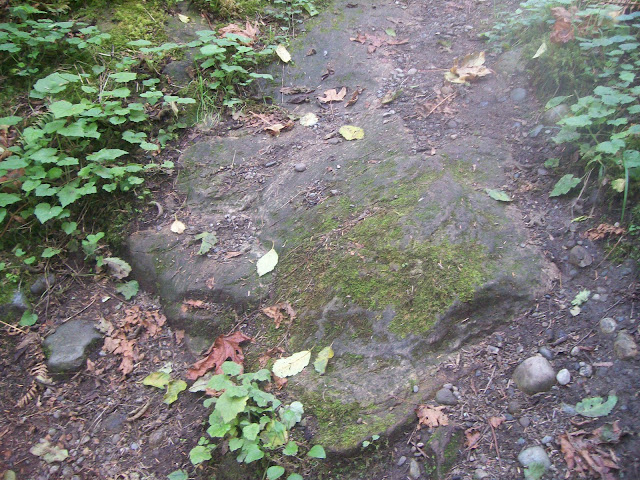 The rest of the geology was covered in biology.

Defeated, we headed for the Sound.  Hadn't been to Redondo Beach since 2000, when Garrett and I visited the city and I fell in love.  We'd stumbled over this delightful little spot by sheer accident.  Well, my intrepid companion knows where it is.  We had sunshine and warmth, probably among the last we'll get for the season, so we decided we'd better take advantage.

One of my fondest memories of Redondo is the huge granite arch there: 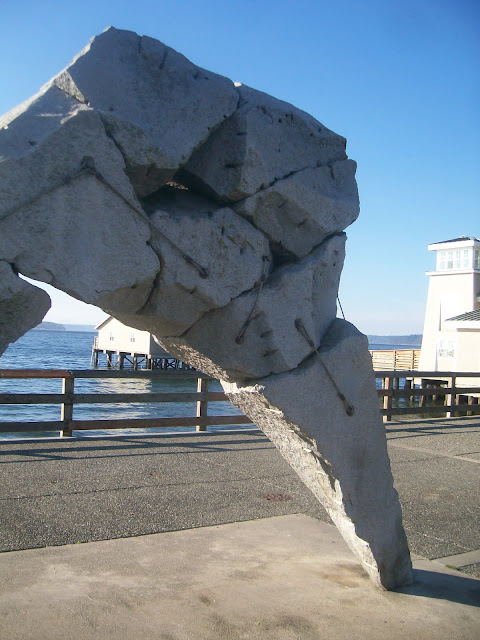 With the sun sinking in the west, you could see flakes of mica sparkling all over it: 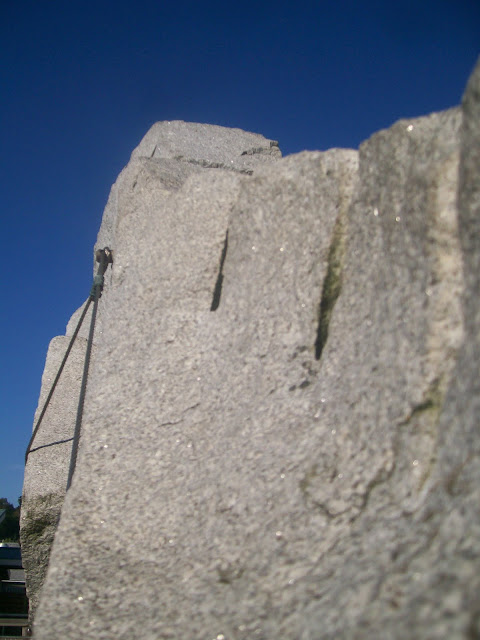 And yes, that is a bright blue sky in Seattle.  It happens sometimes.

Of course, I had to play around a bit with it.  Took a shot through the arch with the granite in focus: 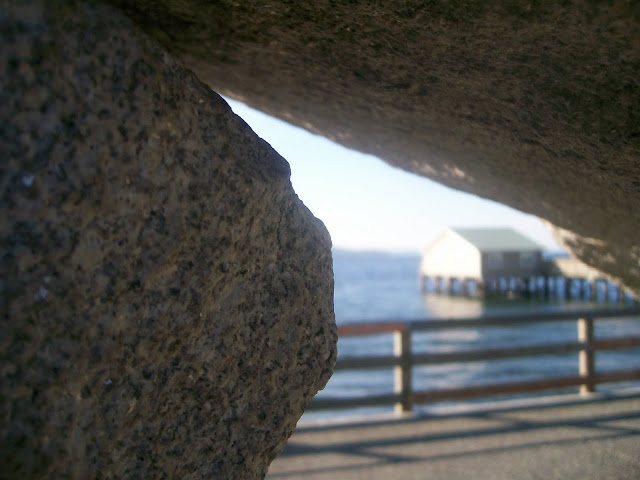 And one with the Sound in focus: 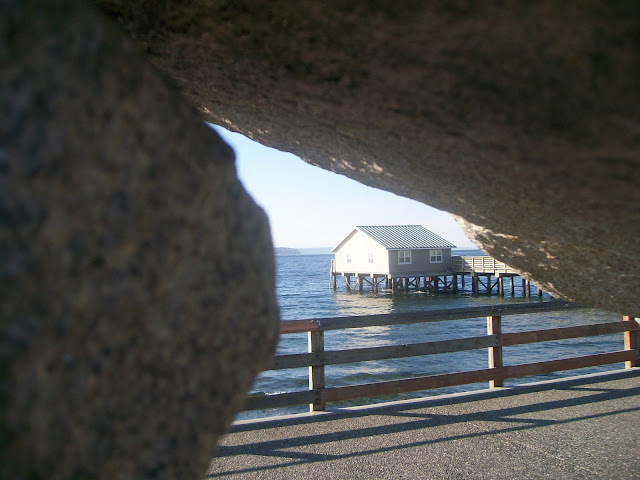 Because it's fun, that's why.

My intrepid companion caught me fondling the granite: 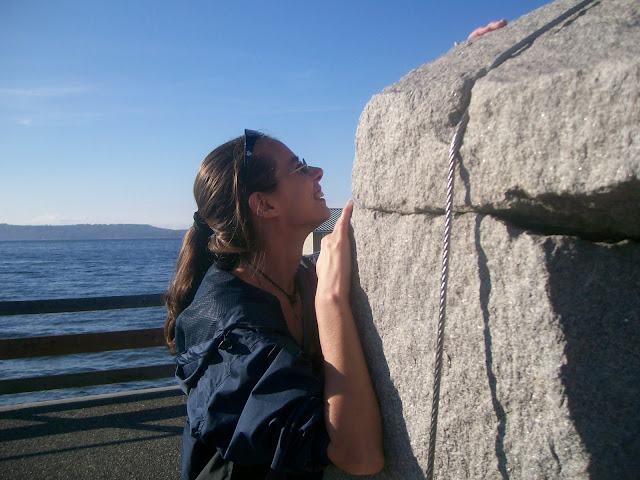 And this interesting little nodule: 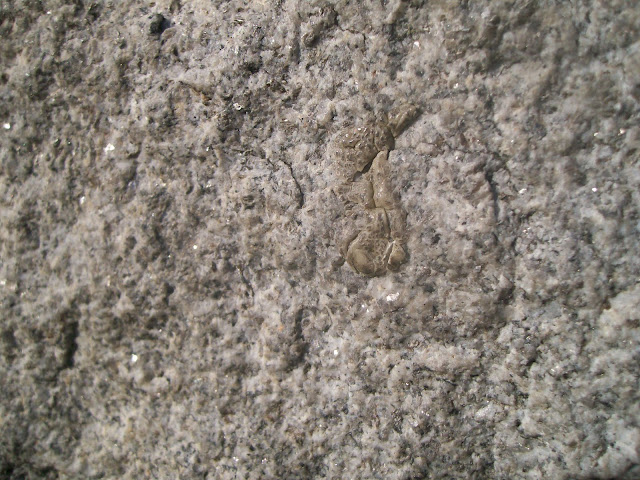 Not sure what that is.  Ideas, anyone?

Got me feet wet in the Sound for the last time this summer.  My IC caught me picking up bits on the beach: 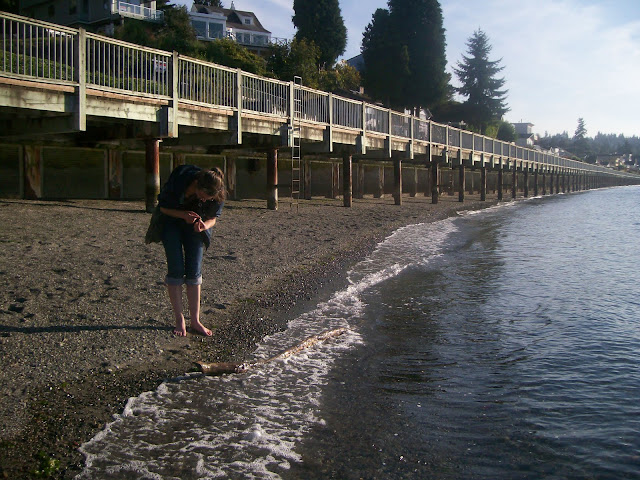 I found an absolutely marvelous bit of gneiss: 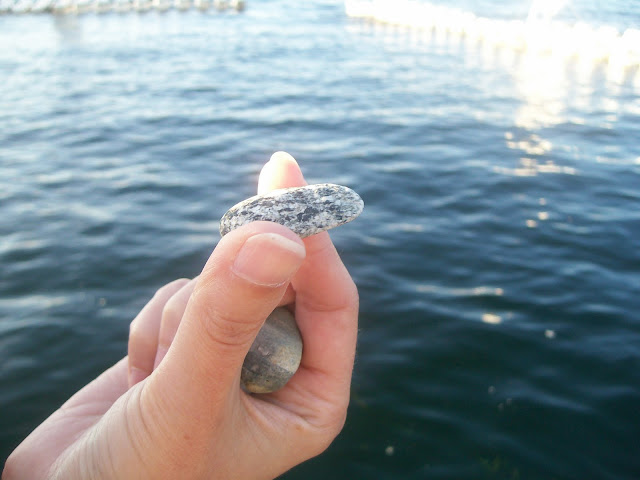 And a wee little crab: 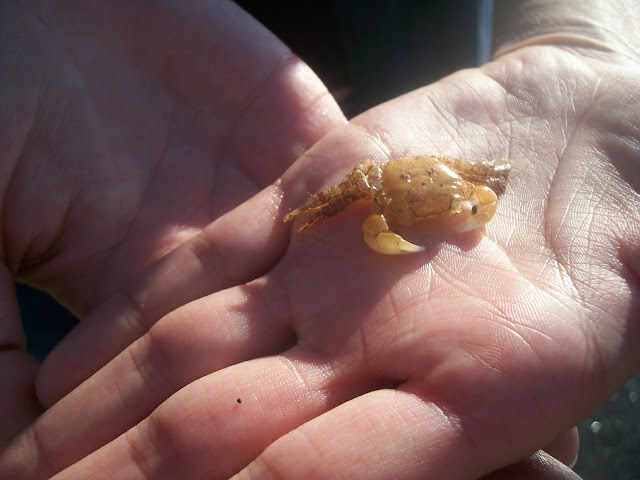 Charles Darwin had his barnacles. So did I: 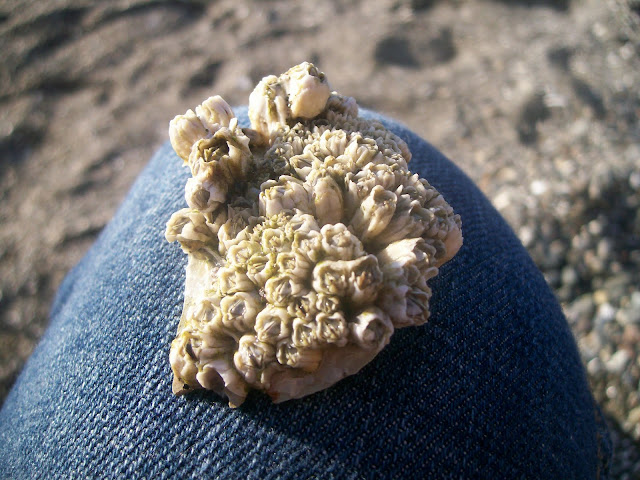 Found a chunk of them down on the beach.  I planned to take it home, but then some of the little buggers popped out trying to filter-feed, and so they stayed behind.  I'm not sure if they'll find a place where they can survive or not, but it's worth trying.

The back of them had a very intriguing pattern: 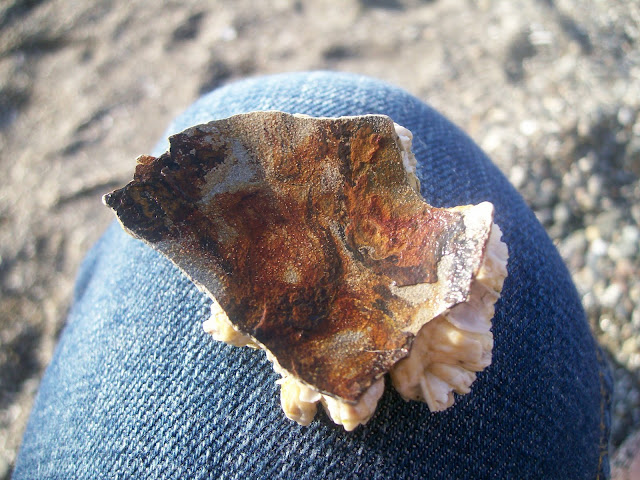 When I saw others encrusting the metal pilings holding up the sidewalk, all became clear: rust and paint.  I can only imagine the maintenance headaches these little buggers cause.

When we finished splashing about in the freezing-cold waves, we headed out on the boat dock for a nice long sit.  The water was an extraordinary blue: 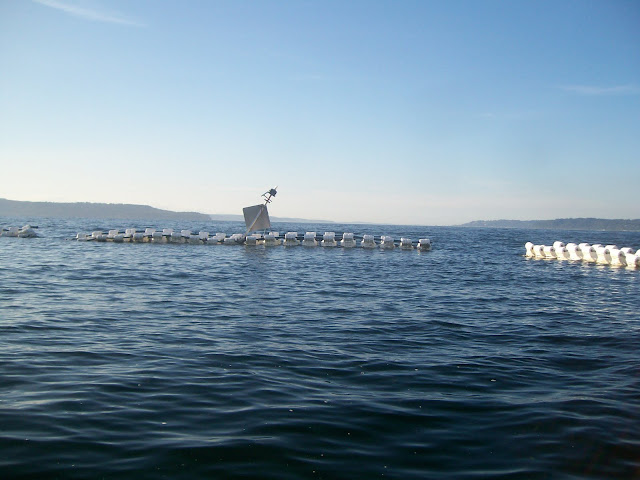 When you're looking out over that amazing azure sea, you're gazing at a seascape carved by an ice sheet.  Hard to imagine on a warm day like today, but none of this scenery would exist in quite this way had it not been for 3,000 feet of ice.  Thanks, Canada!

This being the seaside, of course we had seagulls.  The fat brown juvenile stood at the end of the opposite dock and screamed for a while, at least until he found a friend.  Unfortunately, he proved why he hasn't got many friends: 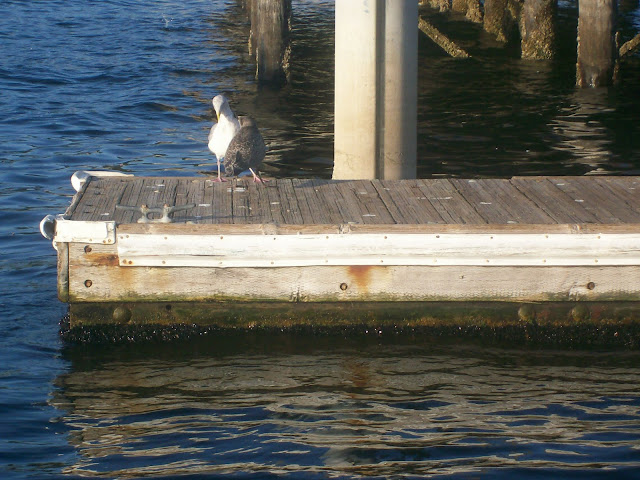 Afterward, he chased his very annoyed buddy down the dock with a desperate-to-be-loved expression.

We didn't stay for the sunset, but Suzanne caught a lovely one tonight, so you're all set in the sunset department.

And that's pretty much it.  Not much geology, but a lovely day nonetheless.  I'm rather going to miss summer.  Good thing I still have a ton of stuff left over - dearest Karen, rest assured that no one shall be deprived of geological adventures this winter!  We'll dream some summer dreams while the snow falls.  Okay, rain.  It's usually rain, here.  Lots and lots of rain.  Which probably explains why putting the formerly-Flaming Geyser in a shallow, undrained pit was such a very silly idea....

(Tip o' the shot glass to the Hiking Guide to Washington Geology, which provided the geologic info for Flaming Geyser State Park.  It's not their fault the damned thing's drowned.)
Posted by Dana Hunter at 1:25 AM

Having read roadside geology of WA, and your comments suggest that there is some coal in the section at the park. I know there was some mined in the near mountains, back when near by coal was important to the railroads among others. Otherwise you have to go to Wyoming or Montana for coal. For a link to WA coal mining history: http://www.historylink.org/index.cfm?DisplayPage=output.cfm&file_id=5158