Boy, I've got a lot to learn.  This is the takeaway lesson from going into the field with Lockwood.  I know a fair amount more about geology than the average layperson, but what I know is a thimble of whiskey compared to a distillery when you set me alongside someone who's actually done this shit for a living.

I wish now I'd recorded audio while we were out there, because I didn't retain much of what he said - I'm one of those people who needs to read and write as well as do before I've really grasped something.  Good thing, then, that he's writing up our adventures.  I shall be stepping into the role of faithful assistant, letting him do the talking whilst handing up useful supplemental photos.

He's begun with one of the most fascinating bits of big black rock I've ever seen: hyaloclastite.  Look, I'm from Arizona, people.  There haven't been oceans there in nearly a hundred million years.  A good number of our rivers haven't even got water in them.  As far as basalts erupted on the sea floor, you won't get a good many exposures, if there even are any.  Hawaiian-style volcanic island complexes accreted to the continent?  Don't make me laugh.  We get the occasional pillows, and that's about it as far as basalt meets water goes.  Suffice it to say, my knowledge of what basalt does when confronted with large bodies of water is a bit lacking.

I'd never even heard of hyaloclastite before Lockwood took us to touch some: 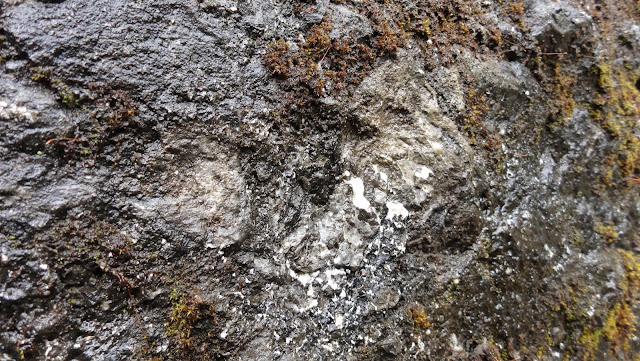 Is that or is that not lovely?


Here's an even closer-up closeup: 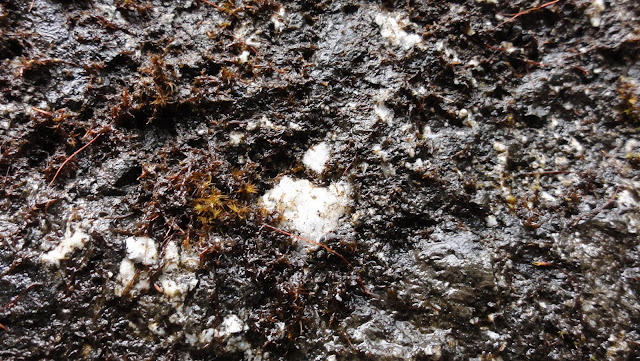 As Lockwood mentioned, this particular block of explosive basalt goodness stands at the intersection of two faults.  As if it's life hadn't been hard enough already!  This is the first time I got to touch something I knew beyond doubt was slickensided, which I have to say was probably more exciting than it strictly should be.  There's just something about tracing the striations on a rock that's been polished by a fault that delights.

Here's the left side, which has the dipping striations: 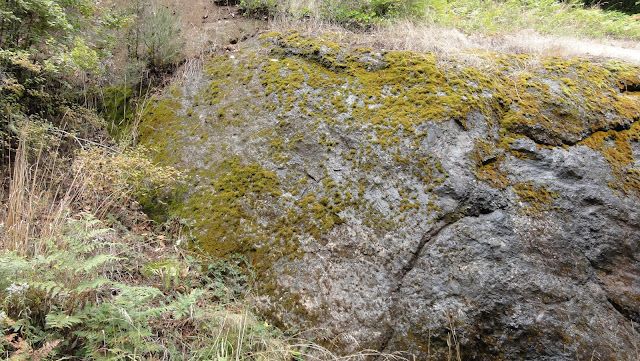 And a closeup of the more horizontal side: 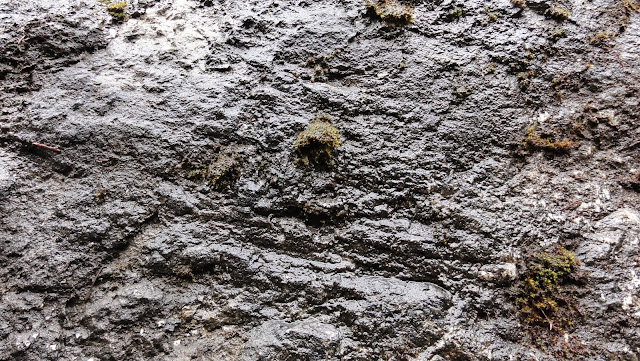 And if you look really, really closely around the hyaloclastite, you might find a baby pillow or two (thumb for scale): 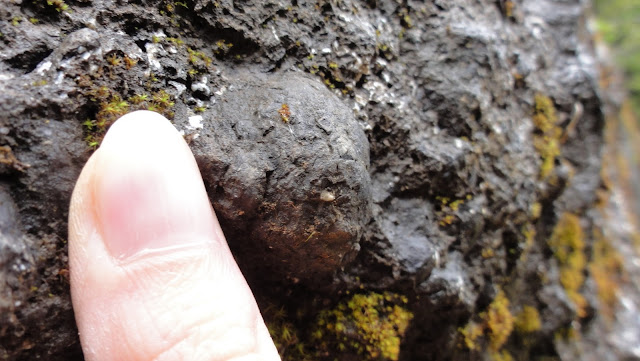 So precious!  I still think we should've collected one to send to Callan.

And, just for perspective: 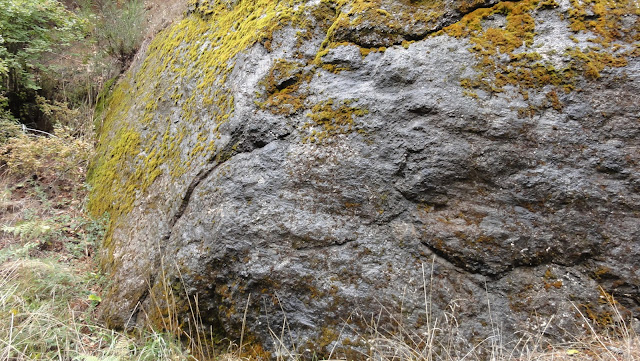 You can see how very nearly square this outcrop is.  Okay, rectangular.  And it's one of those things most travelers will drive past without a second glance.  It's just a big chunk of boring black rock - until you get to know it.

A little ways down, you can find the sill Lockwood mentioned.  I did get a good shot of the columnar joints overlying it: 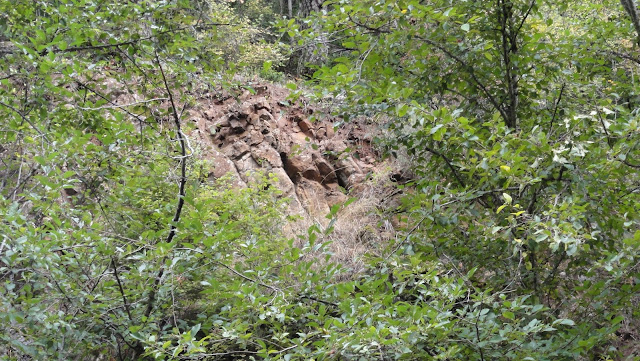 And here's the contact between the basalt sill and the sediment that tells us we're not dealing with a flow: 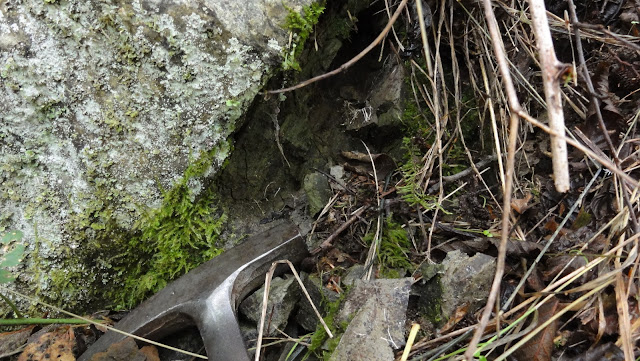 Clean and sharp, that is - aside from the fact it's old, weathered, and has got lichen growing all over it.  But if you enlarge, you can still see how nicely they contact each other, without a trace of basal breccia to be seen.

(And, my dear George, if that rock hammer looks familiar, that's because it's yours.  It finally got to go pound rocks!  An excellent job it did, too.)

So, there ye go - a tiny portion of a day in the field with Lockwood, in which I mostly gave him deer-in-the-headlights looks every time he asked a question.  It will be a long time before I can stare at an unknown rock face and speak with confidence on its possible origins.  It's a good thing he's got more field trips in store, because the only way to truly learn this stuff is to get out and do it.  Someday, when I'm rich and famous, I shall even drag him to Hawaii, where we can see the kinds of basalts that form so much of Mary's Peak's volcanic features erupting right before our very eyes.
Posted by Dana Hunter at 2:12 AM

Great photos! I really regretted not getting one of the bebe pillows: so kyoot! I'm also glad you got some of the columns here, as that has become an emergent meme in the geoblogosphere since yesterday afternoon.