I wish Cons would settle on a century.  Some of them seem to want to return us to the glory days of the Middle Ages.  Some yearn for the days of the robber barons and child labor.  Some seem to be pining for the halcyon days of the Puritans, or burning for Revolutionary War times.  This is a new one on me, though:


Rep. Louie Gohmert (R-Texas), he of "terror baby" fame, is fond of wandering onto the House floor at odd times and sharing odd thoughts that pop into his head. Last night, Gohmert offered this gem:

"We have people on welfare and I know there's some that just don't wanna work, but there's some that do. How 'bout if instead of the welfare, we give 'em an alternative. We'll give you so many acres that can provide land where you can live off of it, make a living and we'll give you seed money to start, but you have to sign an agreement that you'll never accept welfare again. How 'bout that? We got plenty of land."

He really said that. It's on video.

Ye gods.  This fucktard thinks we can return to the good ol' days of the Homestead Act.  He really thinks city dwellers can eke a living out of subprime farmland (because let's face it, all the good shit's in the hands of agribusinesses).  I suppose it's better than the dumbshit who advocates a return to the days of debtor's prison, but not by much.

is a fantasy.  It's not reality.  It's nostalgia for an era that never really was. 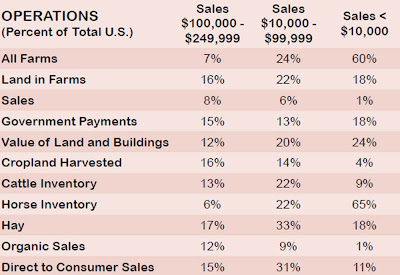 is reality (.pdf).  Notice that 60% of all farms make less than $10,000 per year.  And a fair number of those that make more do so with government subsidies.  Go have a look, Louis.  I know these numbers may be hard for a brain dead fucktard like you to understand, but get someone on your staff to write it up as a Dick and Jane book for you.

Either that, or go try to make your own living on a few miserable acres of substandard farmland, and let's see how long it is before you start screaming for help.  I'm a generous person, and I understand you have your pride, so I'll give you a week.

What a dumbass.  And to think we'll have a whole new crop of little Louies running around Congress come next January.  Fanfuckingtastic.
Posted by Dana Hunter at 12:31 AM