Volcanoes and Debris Flows and Experts, Oh My!

Pop quiz: name Washington's five major volcanoes.  No peeking at teh intertoobz!  I'll give ye some photos to jolly your memories along: 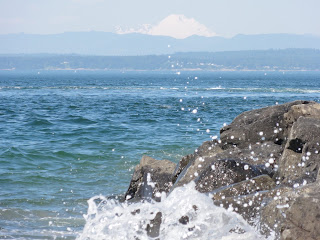 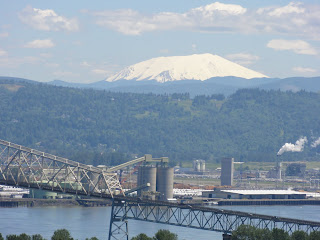 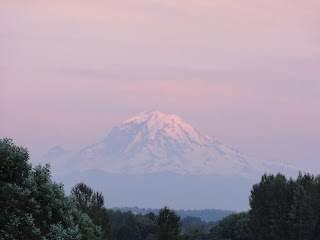 Give up?  Then jump below for the answers - and some more volcano-landslide-expert goodness.

Bet you got at least the first four - Mount Baker, Mount St. Helens, Mount Rainier, and Mount Adams.  But you probably struggled a bit with Mount No. 5:


I often think of Glacier Peak as being the sneakiest at it lies tucked back into the core of the North Cascade Range where its summit and flanks blend in with the high peaks around it. Hence, it is easily the least known of Washington's five strato volcanoes. Although not well known, it has been an active volcano with at least three major mud flows since the end of the last glacial period 13,000 years ago and Glacier Peak dacite fragments show up in preglacial period sediments throughout Puget Sound.

Dan McShane's wonderful post reminds us Western Washingtonians why we shouldn't ever forget Glacier Peak.  When most folks think of volcanic hazards, they worry about things like big booms and lava flows.  Well, debris flows aren't no picnic, either, and they're much more likely on our mountains.  Considering how much we've built on top of old debris flows from various and sundry volcanoes around here, we'd best pay attention to such matters lest we end up underneath a lot of matter.

Speaking of a lot of matter falling down, our own Silver Fox wrote up the Blackhawk Landslide.  When one thinks San Andreas, one thinks cracks in the earth and buildings falling on top of people.  Well, that's not all by half!


The reason for northward thrusting is the bend in the San Andreas fault, causing the westward, southward side to be pushed northward, breaking over the steepened San Bernardino Mountains in low-angle faults. The thrusts cause brecciation, and the steepening, brecciation, and low-angle faulting predisposes the area to massive sliding. Stratigraphy is somewhat retained in the slides, and gold has been mined from nicely pre-broken landslid rock of the Blackhawk Slide. Silver occurs in somewhat disturbed veins in the Silver Reef Slide.

Rather good at getting things all broke up, innit?

Whilst we're on the topic of volcanoes and bits of land going down, you've got a bonza chance to get your burning questions about Mount Hood answered by Dr. Kent, who's been studying the place.  Get yer questions in to Erik before September 24th!  Contact info at the post.
Posted by Dana Hunter at 2:09 AM

Hope your having a great trip and thanks for spreading the word about our volcanoes.