I'm off to enjoy me new books and work on a post idea that struck me on the way to work.  In the meantime, here's some intriguing and awe-inspiring stuff from the world o' geoblogging.

Silver Fox has posted her Highway 50 links.  I wish more geobloggers would do what she's doing and post in-depth on a stretch of accessible geology they know well.  Looks like another field trip for moi will be in order, because after this series, I'll be wanting to sample the geology for meself.  Who's in?

Those who doubt the power of a mudflow need to watch this video:

Yes, that is a semi being floated off like a little leaf on a current.  I was going to do a little home experiment on the power of mudflows to move boulders, and still might if I remember to buy the damned chocolate pudding, but in the meantime this shall suffice.

Dave's Landslide blog has this image of the landslides caused by Pakistan's current monsoon woes: 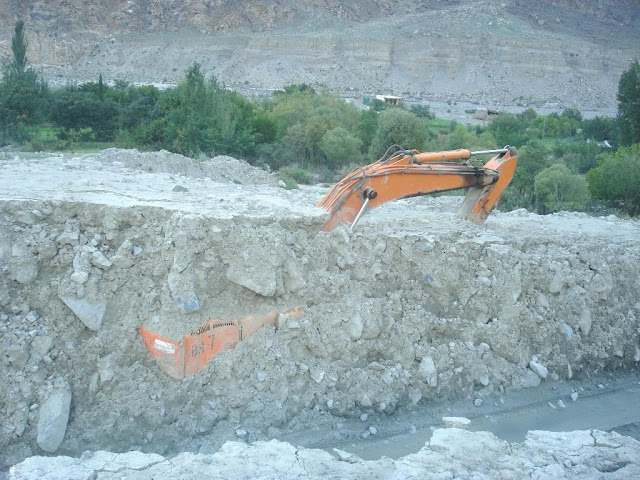 Talk about yer debris flows.  The size of some of the boulders that came down in that thing is staggering.

Speaking of landslides, Dan McShane's not happy about finding the Whidbey Formation: 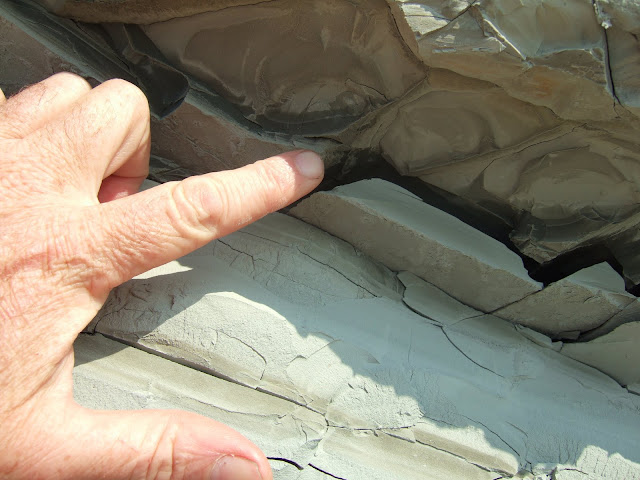 When it gets wet, it gets slippery, and then substantial bits of Seattle fall down and go boom.  As grim as this is, though, his description of it will probably crack you up, so do go visit.  And if you should ever move to Seattle, be sure to check out the geology underlying any home you intend to purchase, lest you find yourself sleeping with the fishes in the Sound.

Highly Anne has an eminently readable post up on social media, diversity and women in the geosciences.

Callan Bentley has an absolutely delicious metamorphosed graded bed to show you:

His blog turns me into a drooling idiot.  Not that it's not filled with substantial science that gives my brain a good workout - it's got plenty o' that.  It's just that when I first click on, there's usually a picture like the above that gets me salivating, and my first comment is "WANT!"

I haven't had time today to do more than skim it, but he's also got a post up about creationism that I commend to your attention.  I shall be settling in with it over dinner tomorrow night.  If you think it's only biologists who have to confront creationism, you haven't hung about the geology department lately.

I think that's enough for now.  I've got books to delve in to, my darlings, one in particular which led to a sustained SQUEE! when I cracked it open this morning.  I even did a little dance.  The cat was not impressed, but then she wasn't even impressed by the dancing dog, so how the fuck can I compete?

Oh, and - happy Labor Day weekend!
Posted by Dana Hunter at 3:00 AM

Thanks for the shout-out!

If you go down route 50 go on to Delta Ut, as it goes by Notch Peak which is quite spectacular from the highway (2200 foot high cliff). Also driving accross Siever dry lake is interesting. (this is the outlet of the rivers at Bryce Canyon and that area).

I would love to be able to do more blogging like Callan's and SF's, but I haven't been able to get out of this damned town in nearly 2 years. Wanna go on a field trip? I've got some good ones...

Thanks for the link! Let me know when you might be coming into the area. :)

Actually I found your description of my description much funnier than my own description. Reminds me to have more of a sense of humor.