My intrepid companion and I had planned to go see the Flaming Geyser on Tuesday, seeing as how I had the day off and all, but this is Seattle, and it's the day after Labor Day we're talking about.  We got rained out.  So he came up here instead, and when we got a brief break in the drizzle, we headed up North Creek for some fun and excitement.

I went a little nuts with the macro mode on my camera.  It's nice to be able to photograph gneiss, f'rinstance: 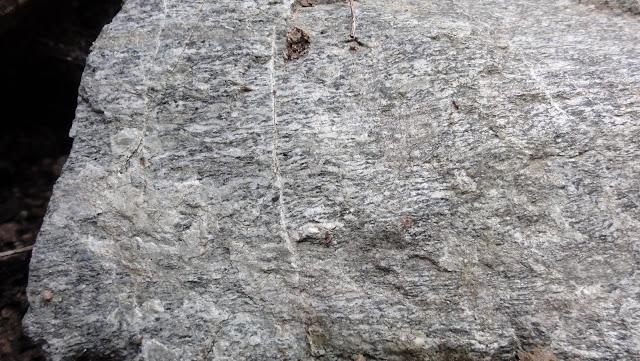 This is a little chunk o' rock in the stone wall by my house.  That's one thing I love dearly about Seattle - all those glaciers dropped interesting rocks helter-skelter, and people pick them up and stick them willy-nilly in stone walls.  This is wedged in a sea of dark brown rock that's welded tuff, as far as I can tell.  Still having trouble distinguishing some volcanics, alas.

Speaking of that possible tuff, you'll see something really sweet if you follow me below the fold. 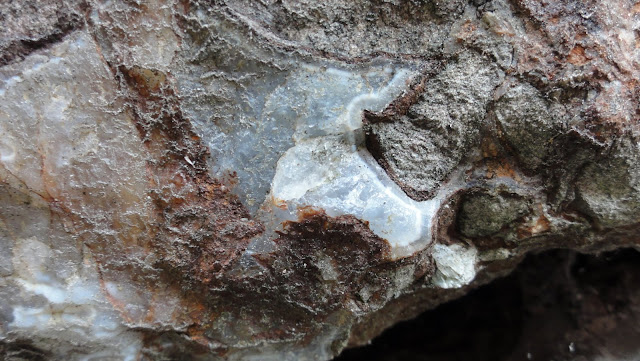 Isn't that lovely?  Those little patches of agate and quartz are all over the place on these rocks.  It's opportunistic stuff - if it can find an opening to settle in, it will, it seems.

That, alas, is all the geology I've got for ye today, but I've got some really lovely flowers, like this one: 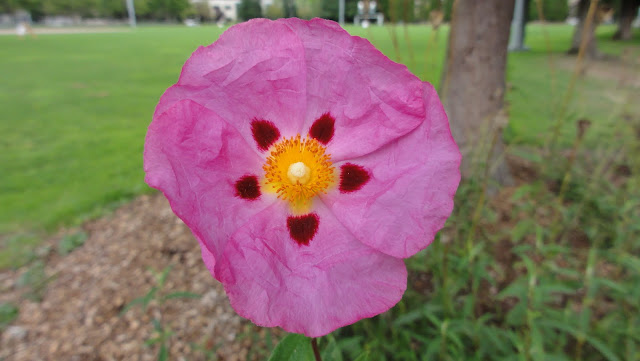 Some sort o' primrose, I believe.  Some of it's still in bloom while the rest is already rosehips.  It's a constant fascination how Seattle's flowers tend to bloom at odd times.

Saw a line of oak trees, and acorns! 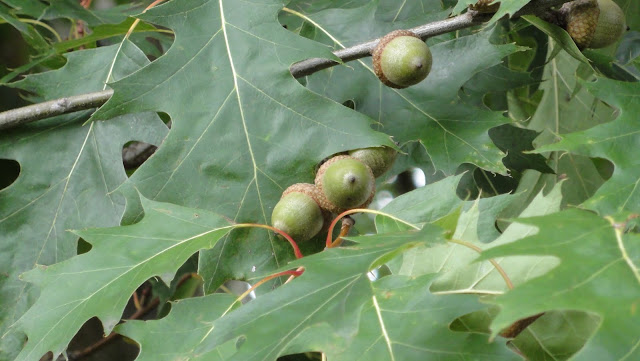 Broken green acorns are scattered all over the sidewalks by the ball field, and there's tons more in the trees.  Looks like our squirrels won't starve this winter.  Not that they ever will in this city.

Further down, it seems some local beavers are considering their land use options and possibly plumping for a pond: 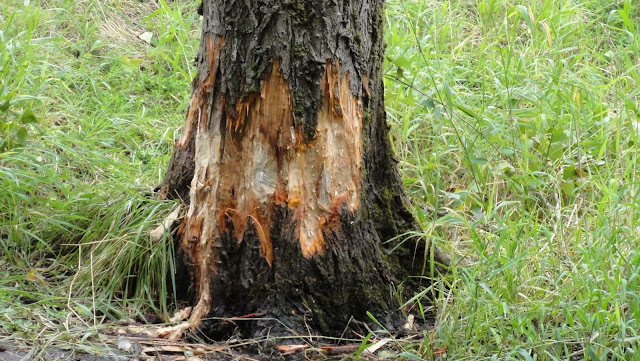 Zoom in on that one, and you'll see their buck tooth marks.  Further down the trail, they've done an even worse number on another tree: 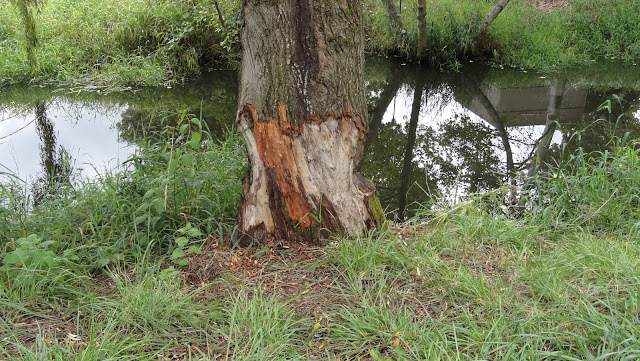 Some of the trees along the creek sport wire mesh tubes.  Now I know why.

Saw this bit of mossy bark lying in the trail, and could not resist a closeup: 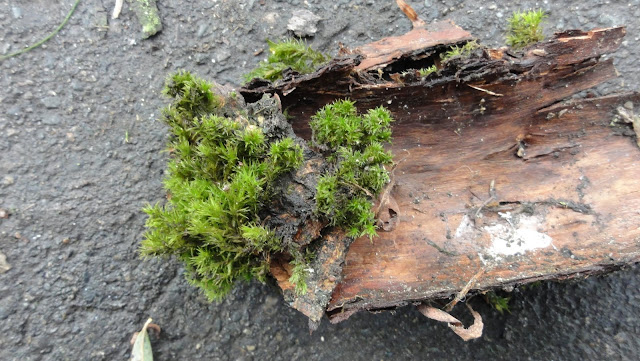 We've had rain for a few days, so everything's getting bright green again.

Up by the restrooms, some wonderful white flowers are in full bloom: 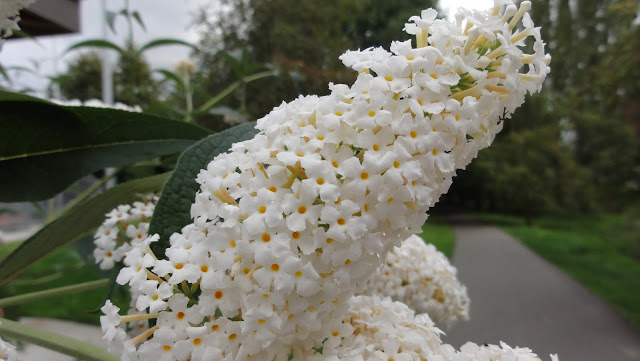 I do believe that's not native, but it's still beautiful, and it smells divine.  No wonder butterflies like it.  Too bad it was too rainy for them.

Some of the clover's blooming still, too: 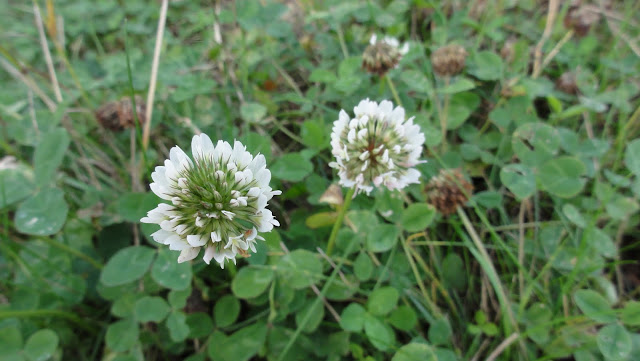 That'll keep the bees happy.  So will this, once the tiny little beetle gets his ass gone: 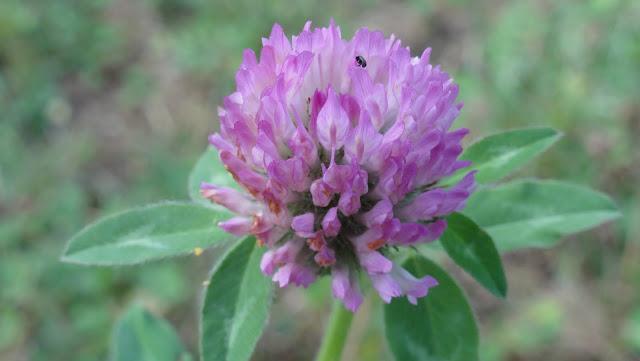 Berries are ripening all over the place, and when one's very lucky, once can get more than one species in a single shot: 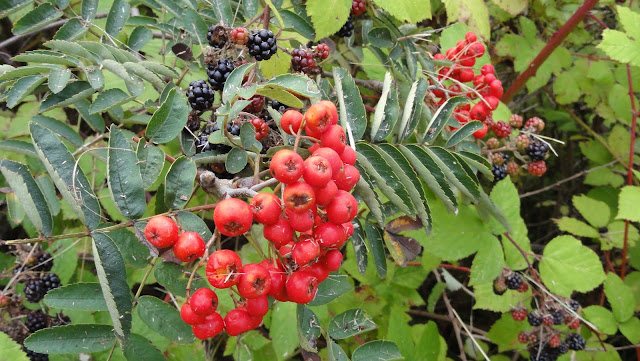 Most of Washington's native berry species aren't poisonous, but if you don't know your stuff, you can't be sure if you're looking at one of the few outliers or possibly a deadly invasive, so we left the red berries alone.  We did, however, munch plenty of blackberries.  Trail food!

At a few places, the trail came close enough to marshes to give us good views of cattails: 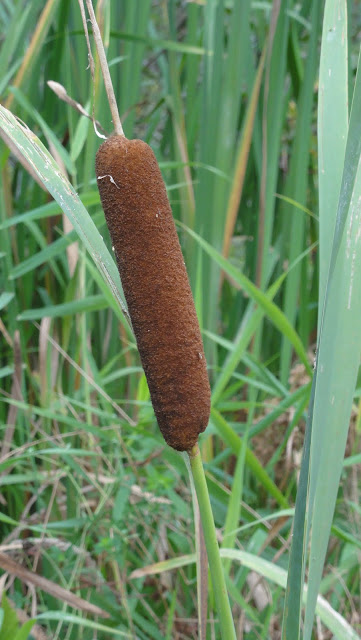 I hear there's good eating on one of those, but I've never tried one.

By the road, we found these lovely white-flowering bushes: 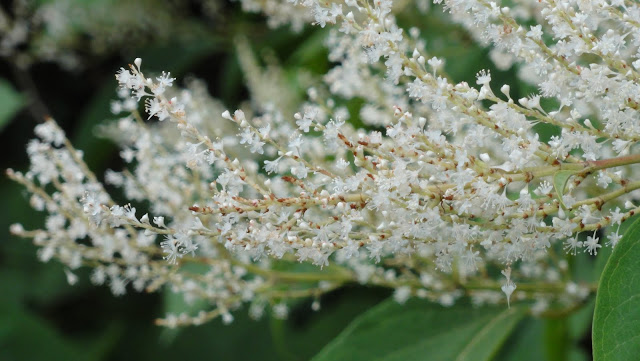 They seem to have more than one pollinator, or at least more than one critter who likes their blossoms.  There was this pretty green fly: 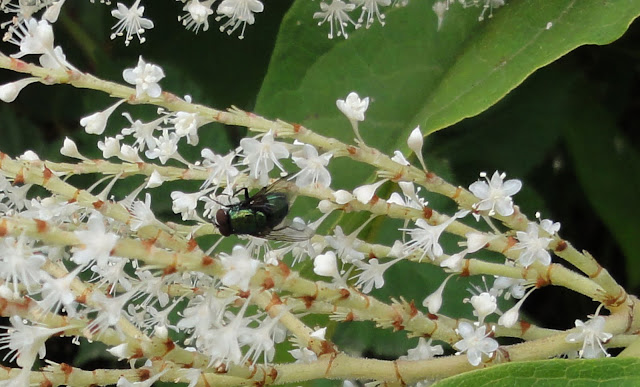 And then something that looked vaguely like a bee from a distance, but which turned out to be a wasp: 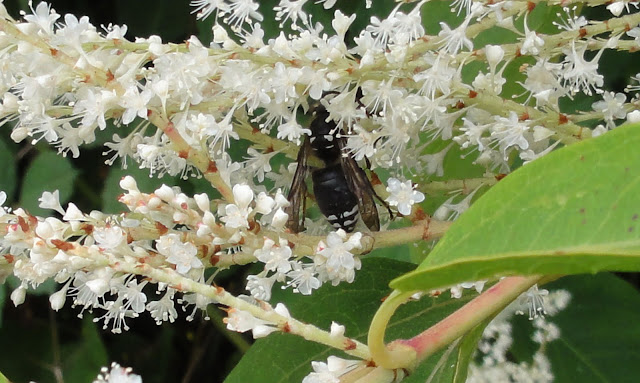 I didn't even freak out.  This camera has changed my attitude to the insect world.  I don't mind getting close enough to photograph wasps, and it turns out they don't really care what I do when they're eating as long as I don't take their food away.  The wasps in this bush went about their business as if we weren't even there.  We didn't push our luck, however.

It's definitely getting to be fall here: 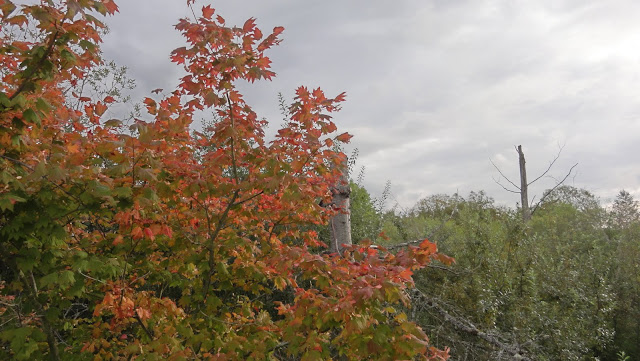 Some of the trees are busy changing into their autumn colors, and a few have gotten a head start on the whole going dormant thing.

I'll tell you a nifty thing about Sony Cyber-Shots with a Handheld Twilight mode: you can use in in daylight to get some pretty astonishing color: 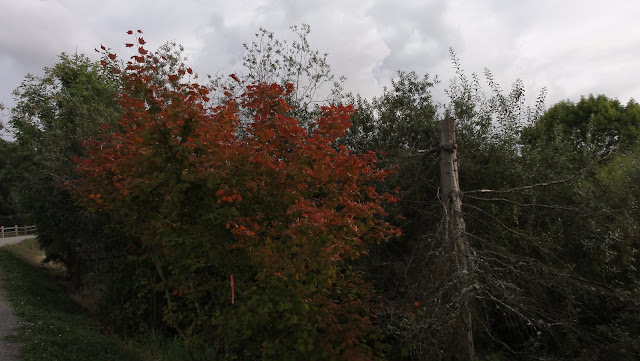 That's the same tree, but the red's not as washed out.  I've used this trick on sunsets, too, and gotten results that are closer to what my eye's seeing.

We visited a bit of the creek I haven't been to for a good long while, and saw its rapids: 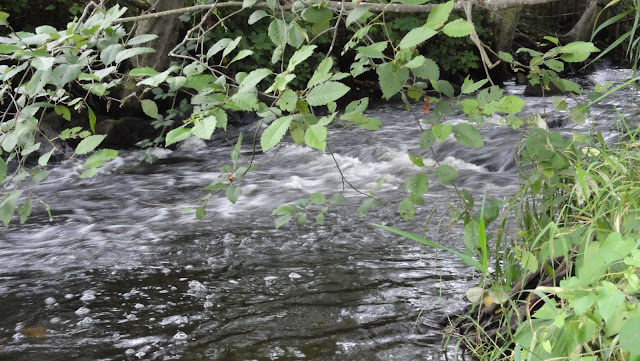 And there's a new bridge near the freeway: 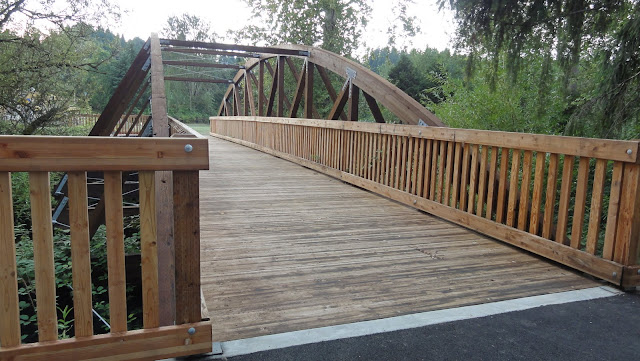 And, before the rains came, a white primrose: 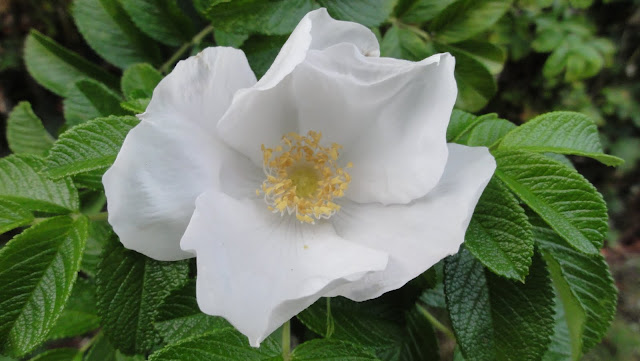 Believe it or not, it was dusky and beginning to rain when I took that shot.  I think I've mentioned I love my camera, right?

We scrambled home before we could get completely soaked, and found a cat boxed up and waiting for us: 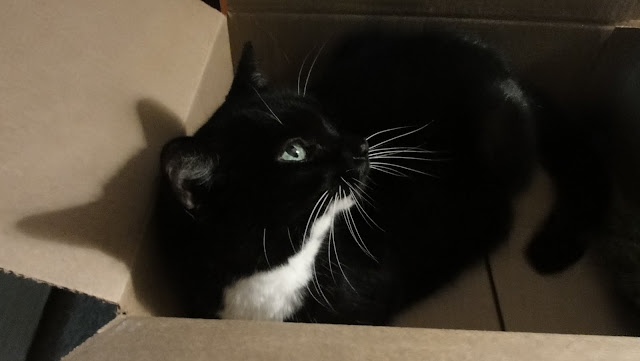 Doesn't she just look the perfect angel?  Don't believe it for a minute - you're liable to lose a limb.
Posted by Dana Hunter at 1:57 AM

i love your camera too