Considering I fully intended not to step foot over my threshold, I've been very active indeed.  I've managed to do a desultory bit of the research necessary for my upcoming treatise on eastern Washington's geology, attempted to make pillow lava, blistered my feet (not related to pillow lava), disturbed ducks, topped up on all-natural vitamin D, and set my cat on fire.

Explanations and photos below the fold.


Things began mostly as intended.  I'd actually expected to be hosting Aunty Flow, since she'd made a rather dramatic announcement of her impending arrival yesterday.  But she's apparently been unavoidably detained.  Still, I didn't hop out of bed, but rather rolled over and retrieved The Beak of the Finch.  I don't begin many mornings just being a layabout and reading anymore, so this seemed like the time.  Besides, it was doing what it typically does in Seattle on Memorial Day - it was raining.

After that slow start, research seemed like the thing to do.  Part of that research entailed trying to find a decent clip of pillow lava, which is how I found a clip of people making their own, and inspired me to do the same.  It turns out you can't use the quick-melting wax from scented wax burners - it solidifies too fast.  And it also turns out that if you fish that wax out of the water and dump it in a container filled with candle wax, the residual water causes everything to explode when it melts, resulting in a wax-coated microwave oven.  Bonus: my microwave's cleaner than it has been in months.

Following that adventure, I abandoned homemade pillow lavas and settled down to read up on local plate tectonics.  That got rather sidetracked by Rick Steves and his damned Mediterranean Mosaic.  Suffice it to say there are now a great many more places where I want to go inspect building stone and play with the local geology, and they are not an easy afternoon's drive away.

Then the damned sun came out.

I broke my promise to the cat and abandoned her willy-nilly.  I slipped on my glorious new flip-flops and went trekking.

Right down the street from my house is North Creek, and a strip of wetland in the heart of Bothell's industry.  On the way, I came across a brand-new wetland where our property's not draining very well, and discovered a deuce of ducks who weren't at all happy I'd just interrupted their banquet and insisted on photos: 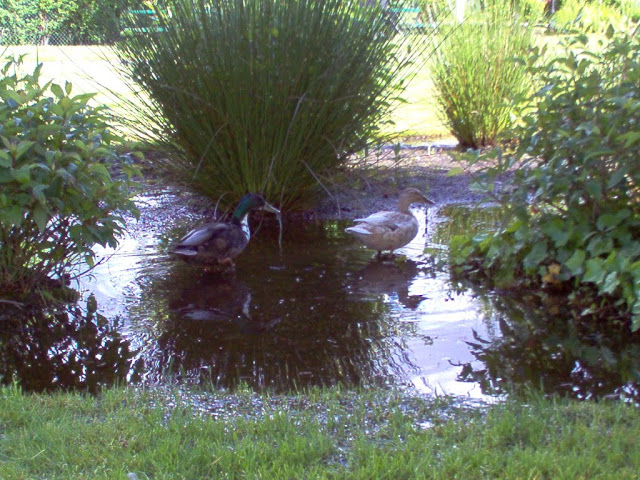 They got over it.

This shot was taken last year while everything was blooming, but it'll give you an idea of what the walk looks like: 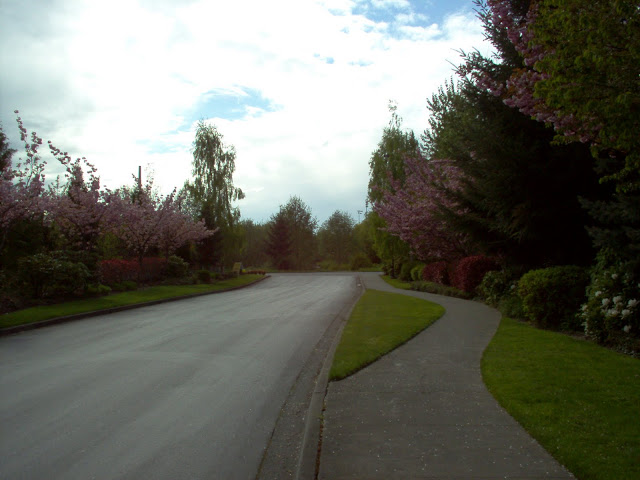 Believe it or not, there's a Staples and a Starbucks hiding off to the left there, and a bunch of big powerline towers off to the right.  We're going across the street, where we'll see a fun cloud formation: 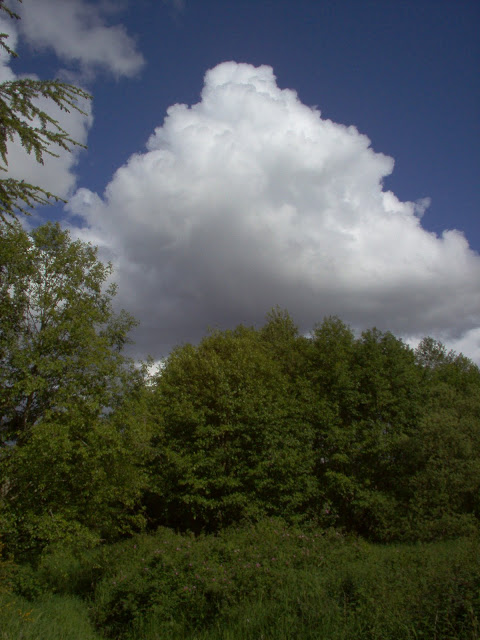 You walk up along a path that seems like it's the middle of nowhere until you curve around to the ball fields and business park, but there's still a lot of trees and such along the creek that runs between them.  And more ducks: 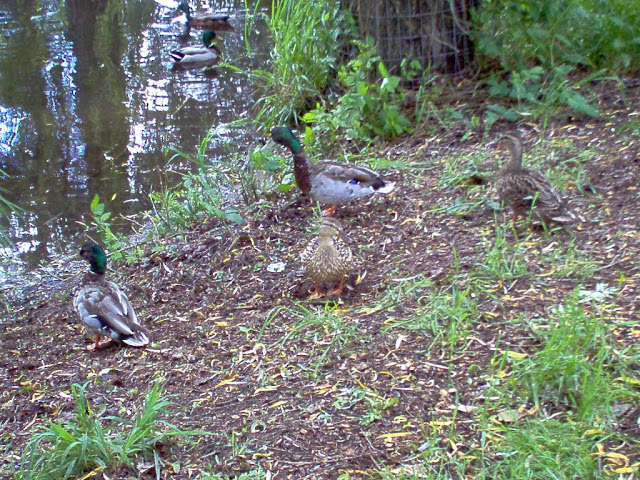 On up the way, you cross 195th St., and they've really done up the place.  When I walked through last year, new levees and such were being constructed, and it was all in a bit of chaos.  Now, there's a big peaceful pond hiding right behind the buildings fronting the street: 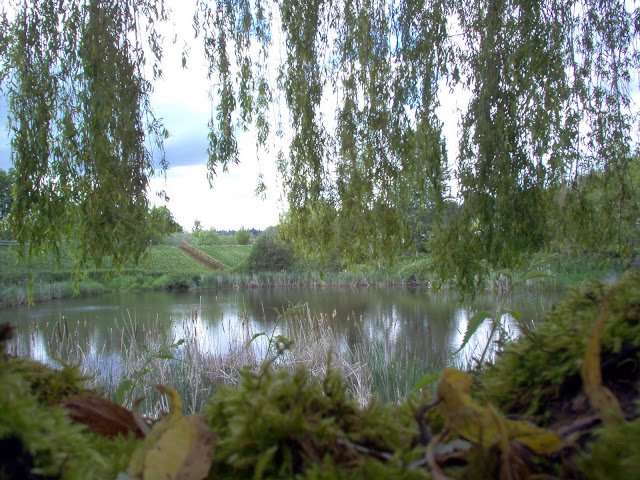 That shot was taken with my camera stuck in the crook of an enormous, moss-covered tree.  Delightful, no?  And there's a cute little concrete bench there, where someone had left a nosegay of wildflowers: 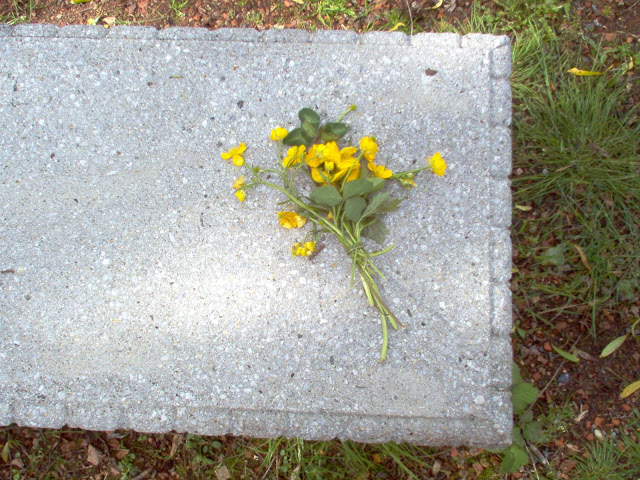 Speaking of flowers, the path takes you up to that staircase you can see on the opposite bank, and from there, you can sit beside a whole hillside of very enthusiastic clover and admire the pond: 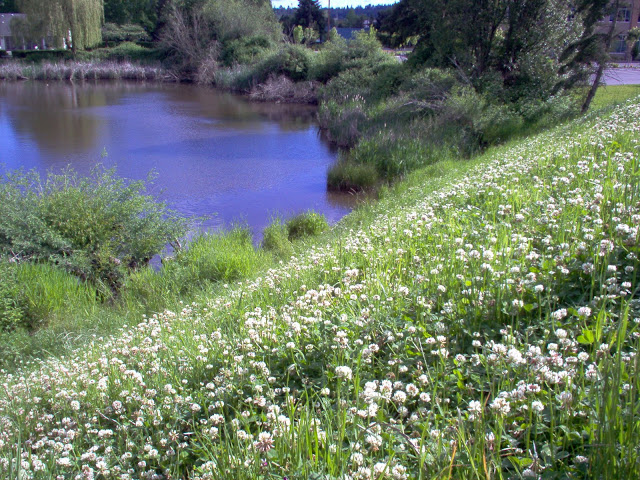 Walk up the path toward my workplace, and you've got office buildings on one side and wilderness on the other.  Here's the wilderness: 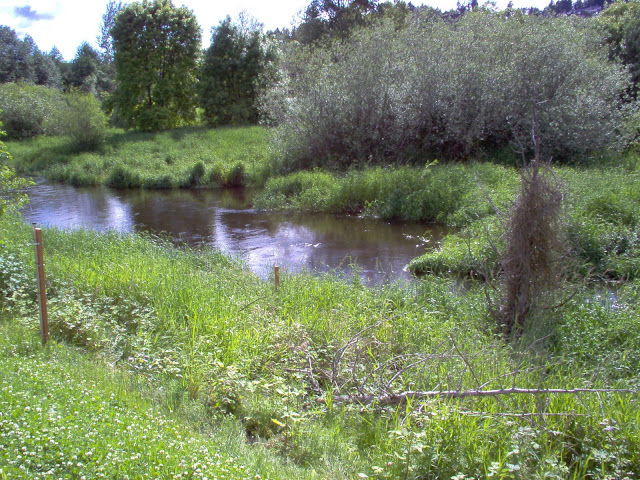 North Creek's just about full.  It's a good thing there are bridges for crossing it: 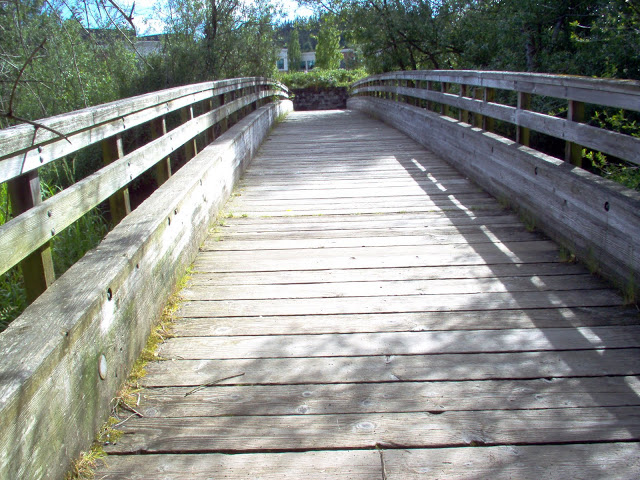 These old wooden bridges are left over from the previous incarnation of the walking path.  When you get to the end, you may be treated to a lovely brick wall, a flower and a bee: 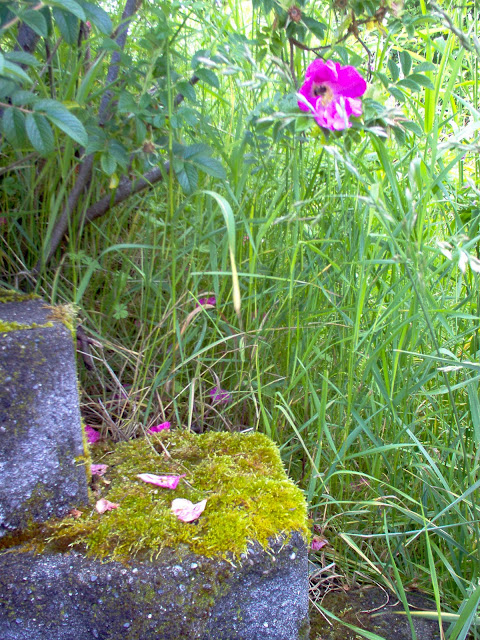 Thank you, I'll be here all week.

There was another bridge to cross, and then a walk down the stairs past the pond and the Mariott, which actually looks like a collection of quaint little brick cottages and fits the theme nicely.  Then it's on down the road past the Seattle Times complex, by which time my poor feet were explaining that the straps on my new flip-flops weren't soft enough.  So I jumped on the lawn and headed home barefoot, carefree and fully intending not to stop - until I saw the rocks: 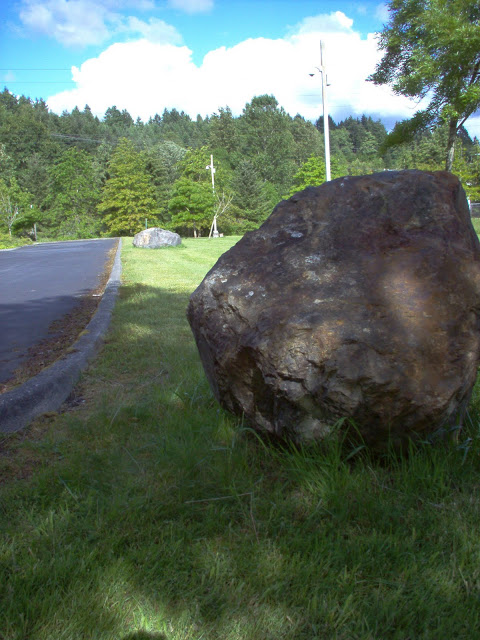 You know me and rocks.  I had to go have a look.  The gray one in the background had lovely crystals all sparkling in the sun, and you can guess what my camera failed to photograph.  So it goes.

Some of the rhodies on the road to the house are still enthusiastic about spring, and they make a nice contrast to the dark little nook the channel flows through: 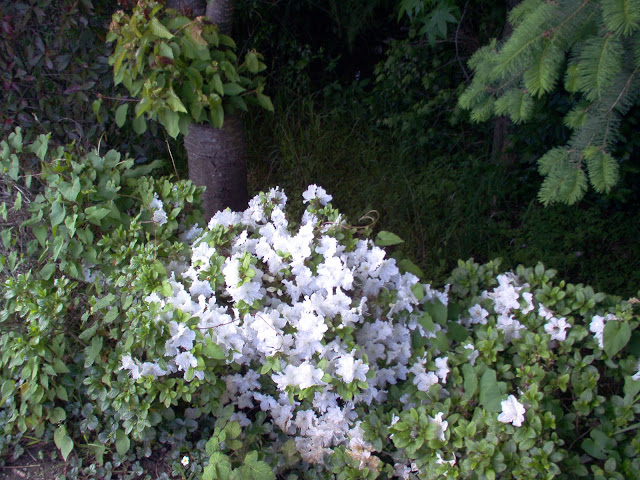 And there'll be blackberries soon, because the brambles are blooming.  Beside them we have some lovely white blooms on an I-don't-know-what, complete with bee: 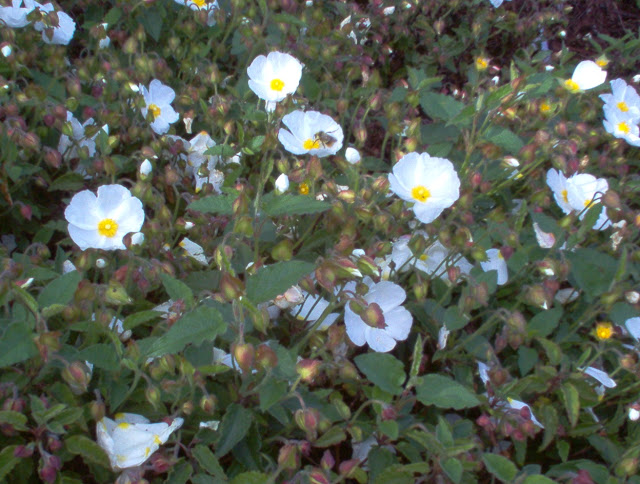 While I was there, I visited some friends of mine.  I'd like to introduce you to a set of my favorite boulders: 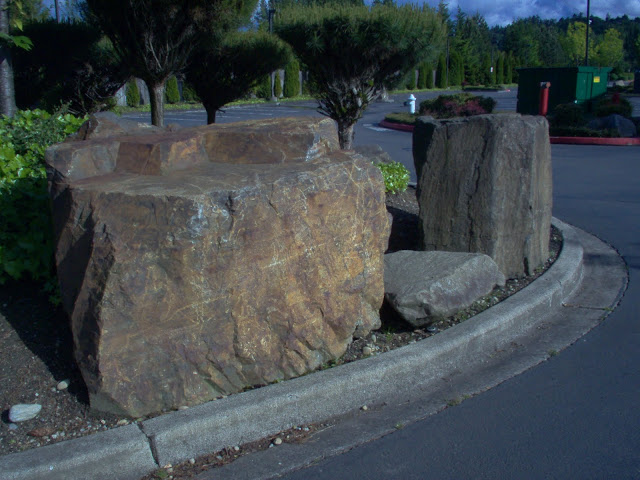 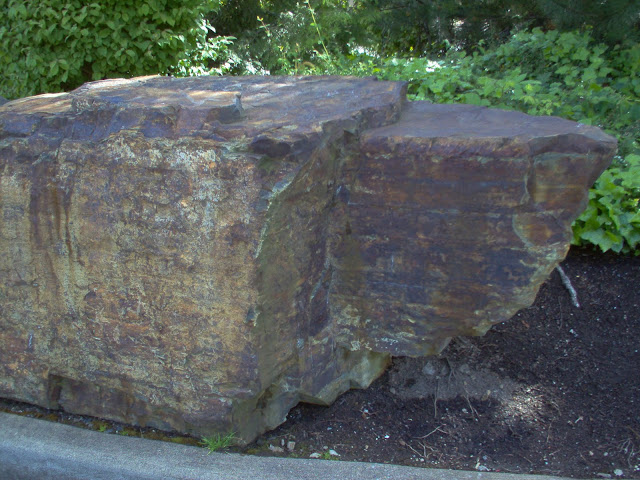 I wish I knew what they were.  Basalt or andesite or some such, I believe - I know I've seen the same up in the Cascades, and I'm relatively certain they're not sedimentary.  Whatever they are, I love them and I walk down to visit them frequently.

Here are some more of my friends, close to my house: 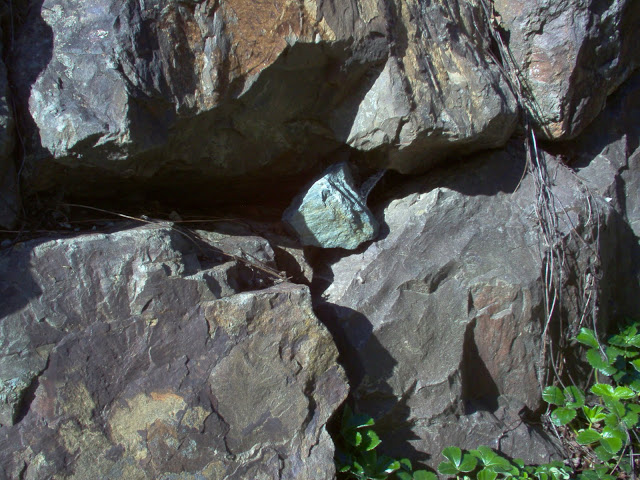 I love that little greenish one just stuck in the middle.  And look - sparkles! 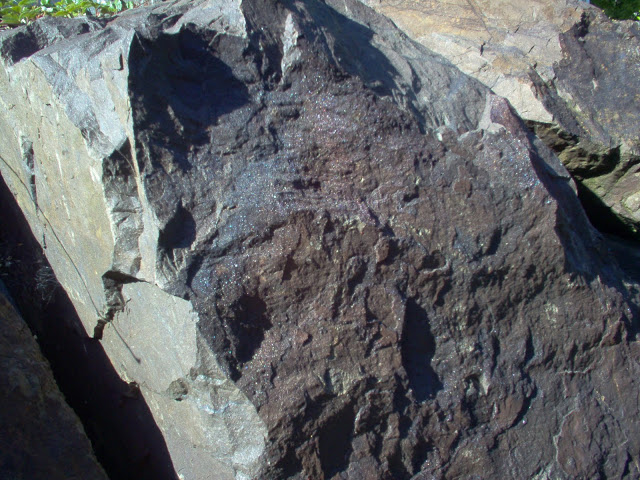 Tiny encrustations of crystal, glittering in the sun.  Aren't they lovely?  I love our stone walls.

Upon reaching home, I took a few towels and a pillow out to the porch and brought the cat outside (under protest) for a nice lie-down in the sunshine.  I read The Beak of the Finch while Misha sat pining at the screen door.  Then she wandered under my hands whilst I was lighting a cigarette, and wended her way back to the door.  It's a good thing she was contrasted against the dark interior of the house, because that allowed me to notice the wisps of smoke rising from her back before she was in full flame.  She'd managed to catch a drifting cinder, and she didn't even notice until mommy patted her out.  She's now got a tiny patch of very short hair on her back.  This seems to have relaxed her, bizarrely, because she stopped asking to go back inside and found a sunbeam instead.  And there we stayed for well over an hour, with the sun beaming through the occasional passing cloud, listening to the wind play with leaves and water trickle into the drain in the lawn like a very tiny fountain.  All was peace and tranquility until a very loud plane roared by overhead.  The cat decided this was enough outdoor adventuring for the day.  And so here we are now, the sun dipped below the buildings, the screen door open, and peace and contentment reining - at least until I have to clean up the mess on the counter from pillow lava adventures and make dinner.

This is why the post on geology is once again unavoidably detained.  Today, I wouldn't have it any other way.

Hope your day was lovely as well, my darlings.
Posted by Dana Hunter at 8:10 PM

What a lovely day! (Well, except for setting the cat on fire.)

You're lucky to have such things nearby. I have a drainage pond and a shopping center.

OK, on Monday I spread cypress mulch hither and yon around the irises and knock out roses out front - and the lovely German and Roma tomato plants off to the side. To speed my walking I use a golf cart instead of feet...