Side Trip Off the Fossil Freeway

Well, my darlings, I can't take you Crusin' the Fossil Freeway myself, since they don't allow cameras, but the Burke Museum did have a few things outdoors my intrepid companion and I were able to photograph, so you'll have a little benefit from my day's adventure.  And, at long last, I ditched the hairtie, and my intrepid companion snapped a photo of me with my hair down! 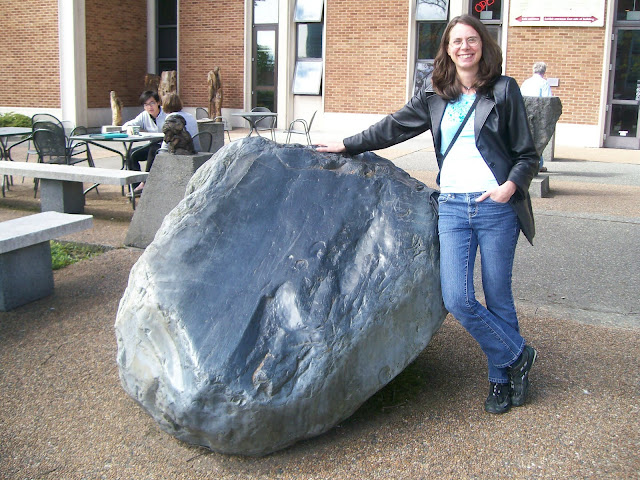 The boulder I'm standing next to was hauled off from the North Cascades by a glacier and dragged all the way to Issaquah.  For those who aren't from the area, that's a helluva long way.  And so we have this enormous rock that's all shiny and smooth with grooves in: 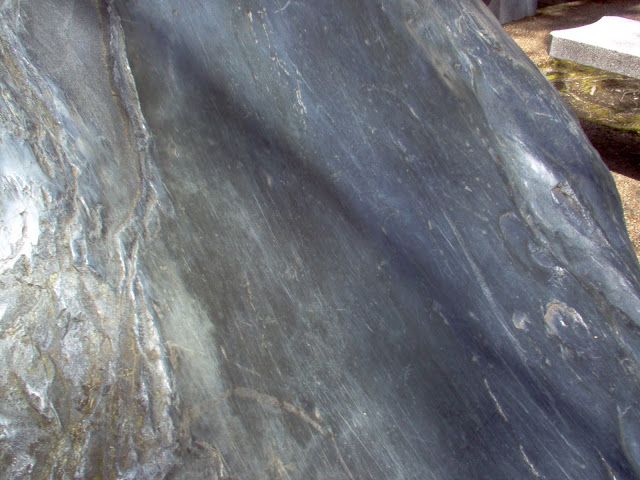 The thing's bright and shiny as a meteor.  It's pretty awesome.


One of the most entertaining rocks outside the Museum is a bit of gabbro with a pegmatite dike in: 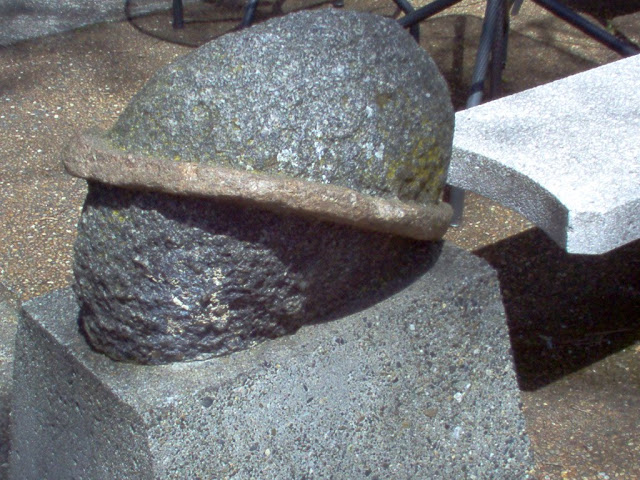 There's a mini-forest of petrified logs standing there: 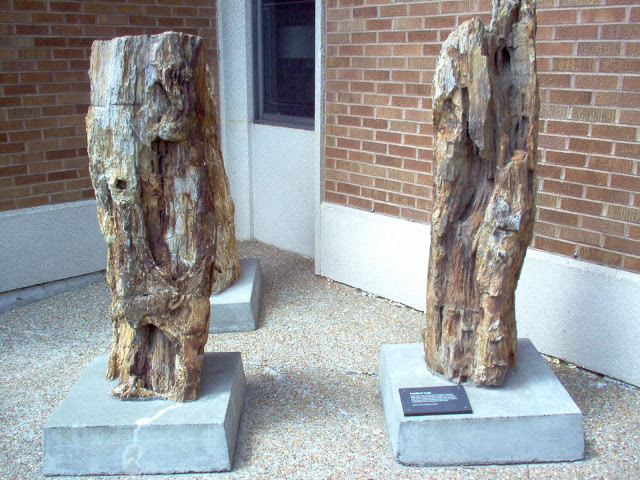 Some petrified wood is very stony indeed, but this felt quite a bit like very-hard wood, which is fun to touch. 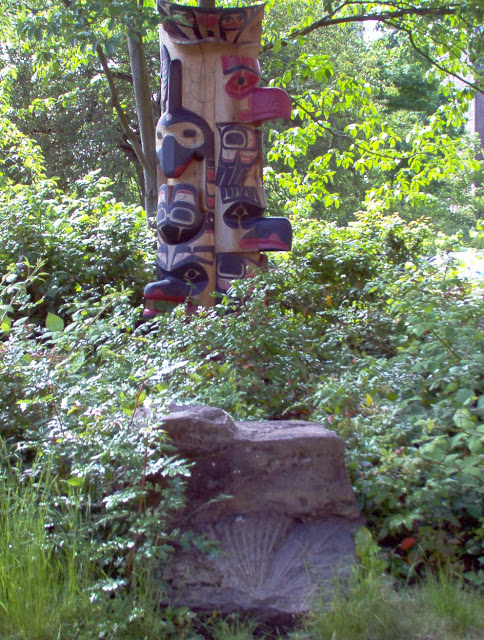 And a detail from another bit of fossilized palm frond that does a lovely job showing off its base: 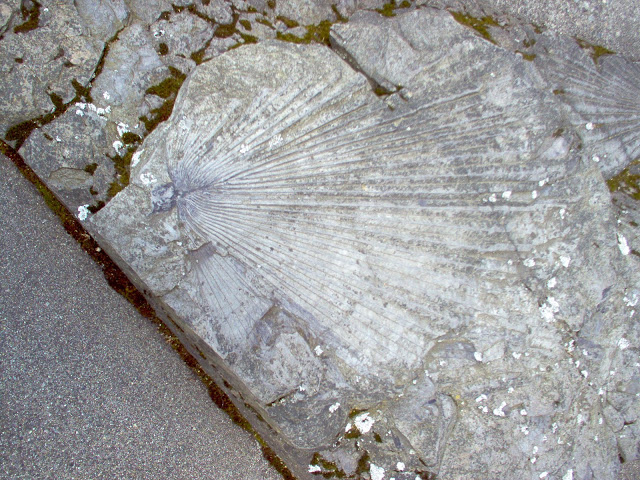 And look!  More palm fronds!  It's a veritable ancient tropical island out here! 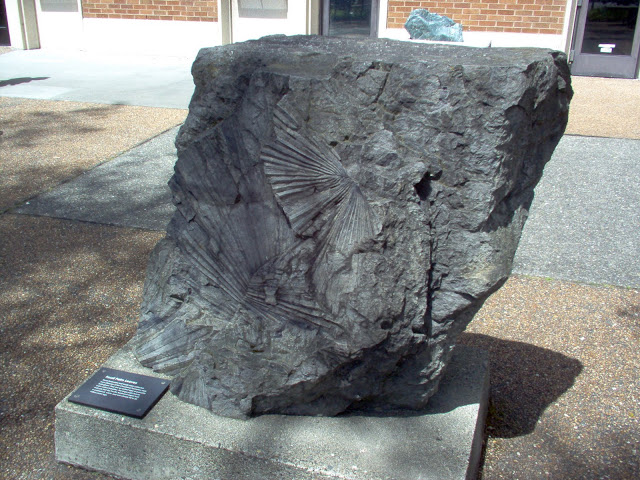 Alas, that was about it for fossils, but hey - more interesting rocks! 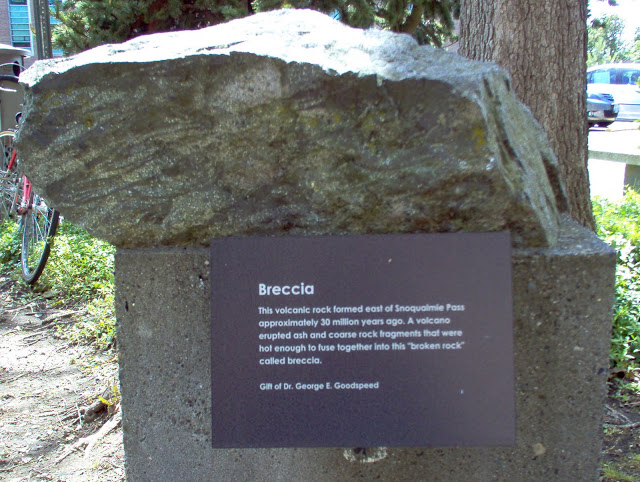 Click to embiggen and note the lovely patterning on the left, there.

My intrepid companion's camera very nearly managed to catch the lovely green color of this one: 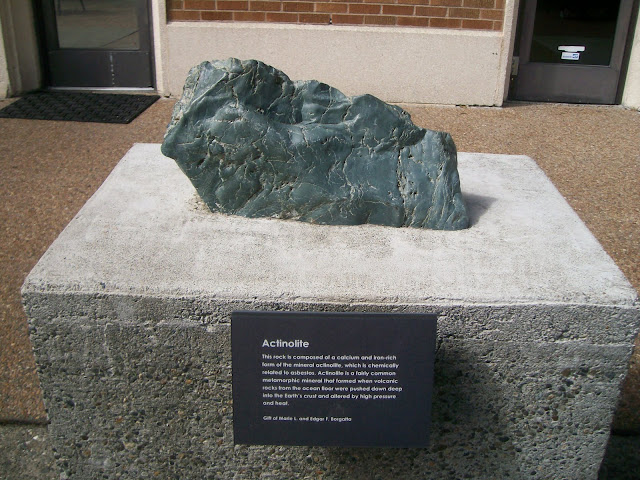 And to prepare you for our trip inside, a pile of pahoehoe that looks like dino doings: 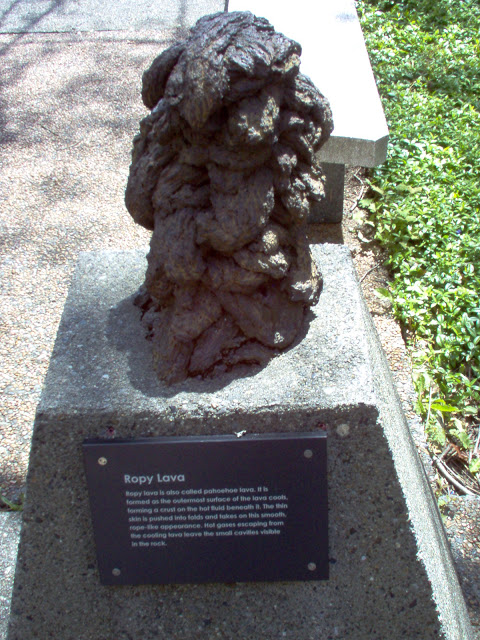 So, now that we've warmed our engine, let's go Cruisin' the Fossil Freeway, shall we?  This exhibit combined the bold, wacky art of Ray Troll with the paleontological finds of Kirk Johnson.  It's an unapologetic, in-your-face exhibit of the evidence for evolution.  In fact, they've got a bunch of crates against one wall stamped Evolution Evidence, containing displays of various fossils and stuffed creatures showing that yep, evolution happens, and sometimes has surprises in store.  One particularly memorable bit showed off four birds - a hawk, a kestrel, a jay, and some red bugger whose species I can't remember just now.  The hawk and the kestrel looked nearly identical, but surprise!  DNA shows the hawk's more closely related to the jay and the red dude.  Convergent evolution at your service, ladies and gentlemen.

Most stuff was under glass, but they had a few nice touchables out for the kiddies, which worked well for me.  I like to feel my way through things.  And one of the most fun things to heft was a mammoth tooth.  You don't know how huge these things are until you've held one in hand.  Of course, this came right after I saw a program on the Ice Ages with a paleontologist hefting one in his hand.  He was waving a tooth around his head that was actually bigger than his head.  You could use 'em as a doorstop.  That's some impressive dentition, that is:

Compare this to the mastodon tooth, as the exhibit did:

And, to round out the tour of teeth, they had a smilodon tooth:

Animals in the Pleistocene, my darlings, had ginormous fucking teeth.

Now, you know why the saber-tooth cat had, well, saber-teeth, but here's why mastodons and mammoths have such different teeth, even though the beasts themselves looked rather similar: mastodons chomped leaves, while mammoths grazed, and the difference between munching non-silica rich foliage and tougher grasses is bigger than you might think.  Additionally, mammoths and mastodons aren't as close relatives as you might think, as this handy diagram shows:

That's them, all lonely, having diverged millions and millions of years before the mammoths branched off from the elephants.  Isn't it neat what we can find out from ancient DNA?

And that was far from all!  The exhibit had a very nice display of modern and fossil leaves, modern and fossil fishes, and so on, showing how things have changed and how they've stayed the same - always with a bit o' snark.  I wish I'd written some of the snark down, because I can't quote it now.  I just remember laughing, which is rarely the result of intentional humor on the part of museum exhibits.  The creators of this exhibit knew you could have your serious science and a good belly-laugh, too.  One of the particularly funny bits was a set of fossil ammonites (I believe) in a case, and off to the side, a "fossil" cheeseburger, labeled just as seriously as the rest of the specimens.  Ray Troll, it seems, has a slight obsession with cheeseburgers, which explains why I left the exhibit with the "Cheeseburger!" line from that Capitol One commercial running through my head.

The fossil ammonites were wonderful - there were some there the size of a wagon wheel, and nice displays showing how some species' shells started uncoiling in their last several million years on Earth.

Photos can't really capture how extreme that uncoiling got.  You just have to see for yourself.  It's striking, no doubt.

There were many, many bits of interest, awe, and inspiration, but my absolute favorite specimen was a square of gray shale with trilobites all over it, collected by Charles Walcott himself from Mount Stevens.  Any of you who are familiar with the Burgess Shale will know why I squee'd just a little bit.

So yes, lots and lots of lovely fossils, together with art and humor.  You can explore Ray Troll's wonderful map of Washington here (don't forget to look for Bill Rose the Paleo Lumberjack - larger version here).  The exhibit runs through May 31st, if you're in the area.  If not, stop by the Burke Museum next time you're around anyway - you can crawl inside a replica of the Blue Lake Rhino cast, measure yourself against a sauropod thighbone, and see a huge number of gorgeous fossils, rocks, and artifacts.  In the gift shop, you can pick up big quartz crystals for a dollar, and magnetic hematite for 50 cents a pop - and if you haven't played with magnetic hematite, you haven't had a chance to truly amuse yourself for cheap.  Sure, it's not real hematite, but who cares?  It's magnetized!  And if a relative's been pestering you for magical healing magnetic hematite jewelry that's hideously expensive, and you haven't been able to talk them out of woo for their birthday, at least you can get them their woo while supporting science, right?

Not a bad way to spend the afternoon, all in all.
Posted by Dana Hunter at 2:08 AM

So cool! If ever I'm up that way, you and I will have quite a bit of exploring to do, methinks!