A Day in Jack's Shoes

I must've got lucky, because getting my emissions test and re-registering the car took all of about an hour out of my day.  So no shit, there I was with all this time on my hands, and so I decided to get some of my research taken care of.  What better idea is there for a brilliant sunny day in Seattle, right?

My main character, Dusty, has a brother living in Redmond named Jack.  So I headed out to Jack's neighborhood.  There's really no substitute for actually being there, and I discovered he lives right across the street from Idylwood Park.  Well, hell.  I'd had to park to walk up Jack's street anyway, might as well trot on down and enjoy the view.  I'd only been there before on one cold, partly-cloudy October day before.

It's right on the shores of Lake Sammamish, surrounded by hills: 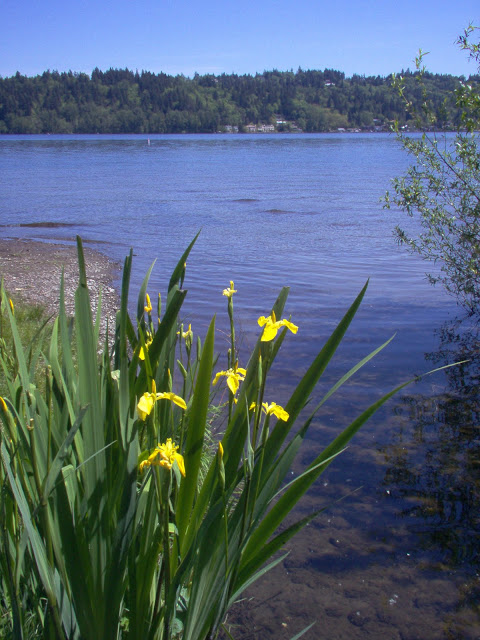 And it's got a lovely little bridge: 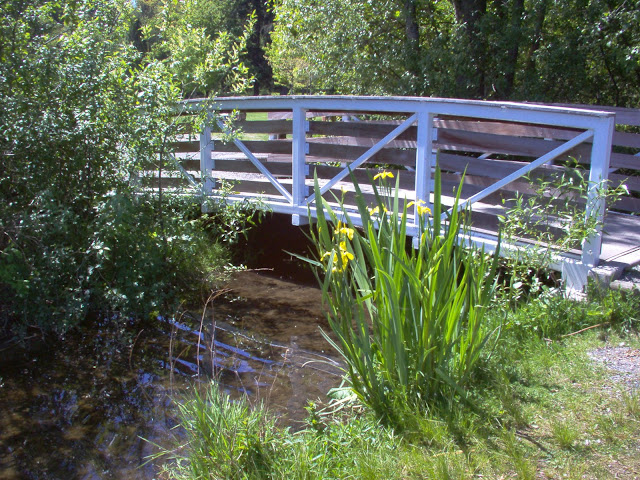 It's a lovely place to bring a family on a spring afternoon, so I imagine Jack & Co. spend quite a bit of time there.

After that, I had a whole afternoon to kill, but I hadn't brought anything other than Jack's address.  My Garmin didn't have King Creole in it.  But I drove off willy-nilly anyway, figuring I'd just have a nice drive around the lake and intercept Cherry St. at some point, from which I could easily find King Creole.  Well, it was a lovely drive, except for the bits where I got completely lost and had to contend with traffic in those terribly narrow streets in the neighborhoods around downtown Seattle.  But I eventually did find Cherry Ave., and up the road I went, finding good Louisiana barbecue just before true starvation could set in: 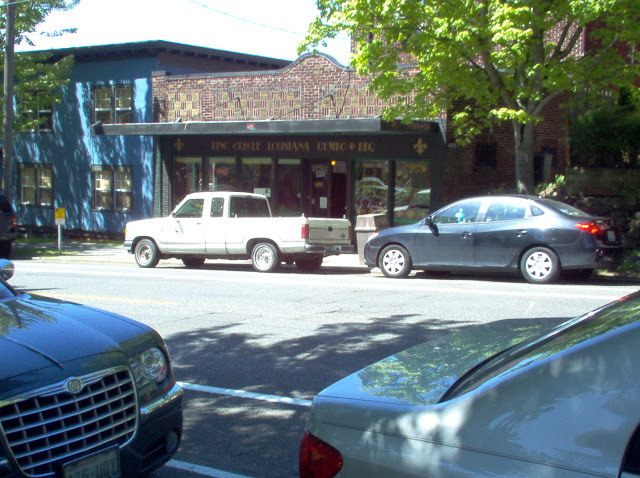 Dusty and Jack had lunch there one Sunday, and ZOMG, it's good.  A couple of guys eating at one of the two tables inside told me the gumbo's something you'll tell your mother about.  I don't doubt them.  Sitting in there, surrounded by the smells of good Louisiana cooking, the kind of smoky, good-greasy scent that makes your arteries go clang and your stomach sit up and beg, I could believe anything.  Their music's great, too, although I couldn't tell you if it's jazz, soul or blues - my expertise in that area is best measured in nanograms.  There were two colorful Mardi Gras posters on the walls, on either side of a door painted to look like an arch, which was a neat touch.  It gave personality to the place.  But it doesn't need much extra.  Especially not with some of the sweetest staff in the known universe.  You don't just get your food, you get glorious smiles, too.  I think it's to prepare your stomach for the shock, because the food is spicy goodness, and the pecan pie - well, you'll just have to have it yourself. 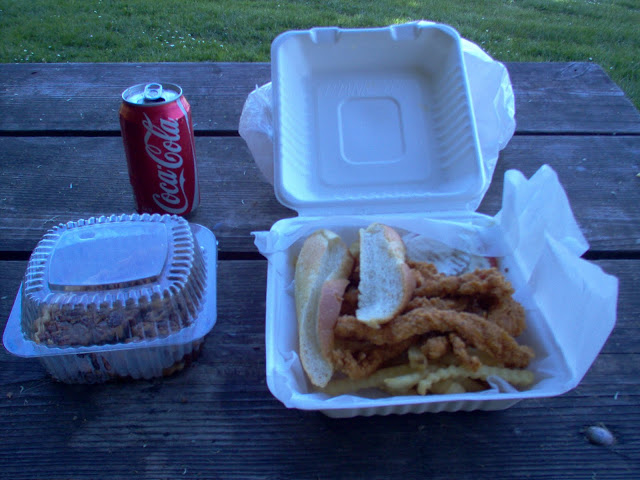 That's the stuff.  I like a dessert that fills the container, rather than crouching forlornly in one corner.

I'll be taking my intrepid companion there soon.  He likes a good gumbo.  And just down the road, you can hang out in Madrona Park.  That's where Dusty and Jack took their food, so of course I had to go.  It was a little hard to eat at first, because the view knocked the breath right out of me. 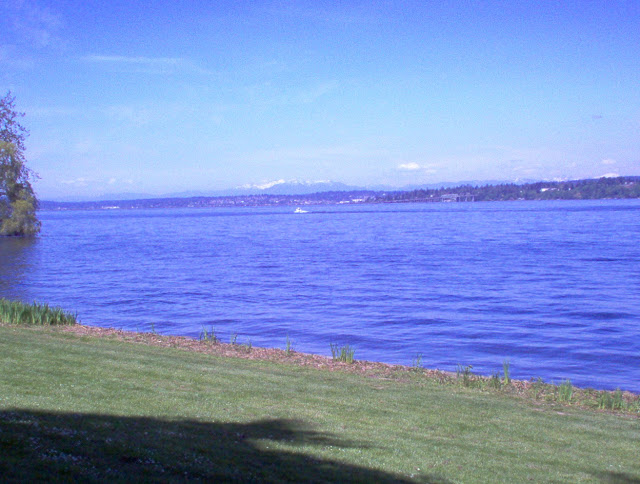 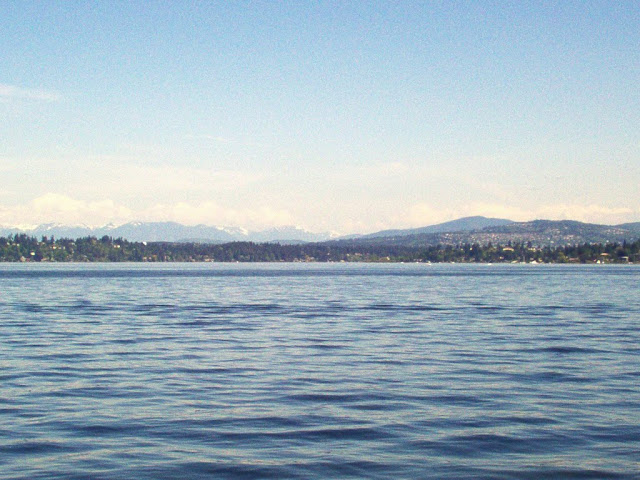 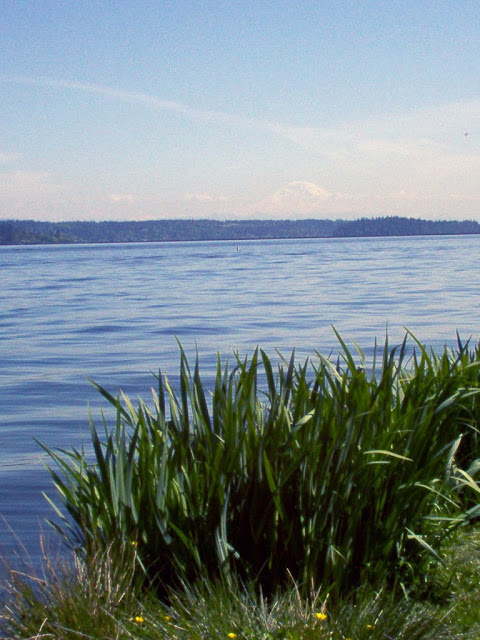 Nearly 180 degrees of your view is taken up with the Cascades, the Bellevue skyline, and Mount Rainier.  It's just incredible.  One day, I am getting a better camera, and I'm going back there.

On the opposite side of the road, creeks cascade down man-made waterfalls: 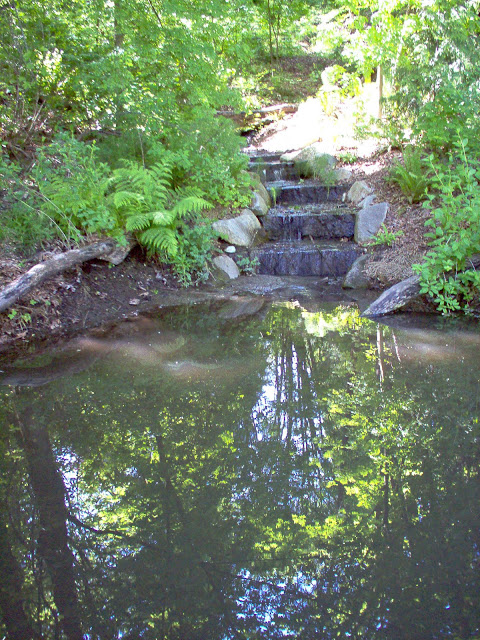 They can distract you for about ten seconds before the view tears your attention back.  If you go, don't forget to take the walk by the creek, where you can get vistas like this: 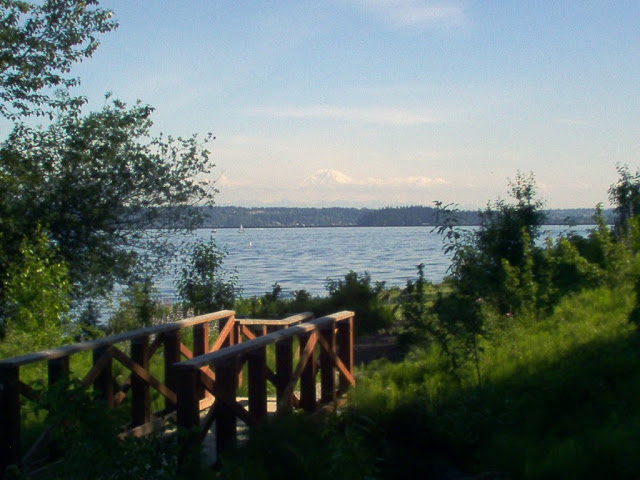 And there are places down by Lake Washington where you can get some great shots through weeping willows: 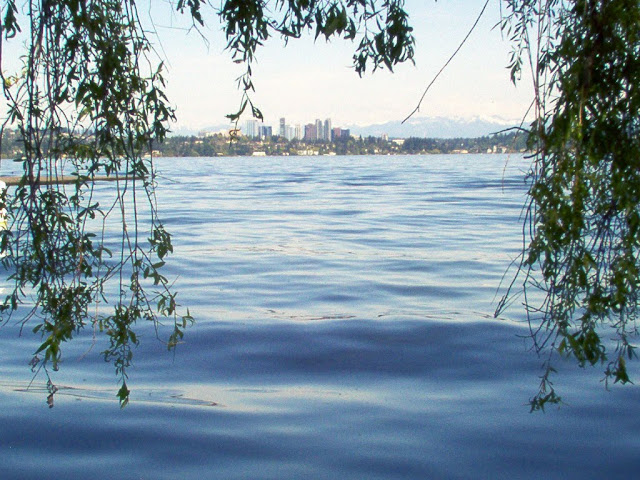 And at Lake Washington, if you wait a bit, you're sure to see a seaplane come in for a landing: There's more than one friendly tree in the park.  For some reason, this one by one of the picnic benches caught my fancy: 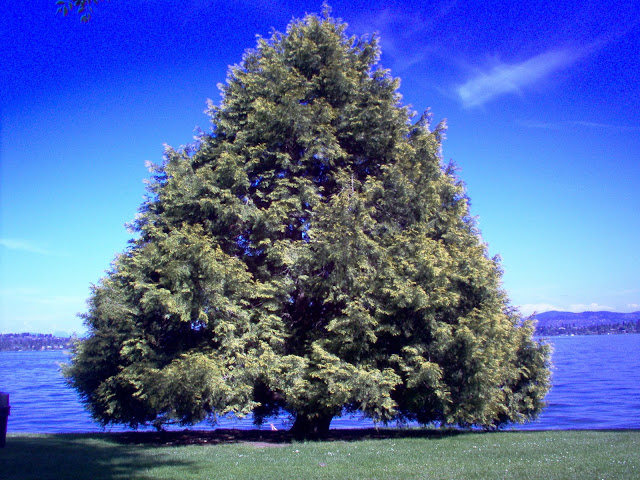 It's got a lively shape, hasn't it? 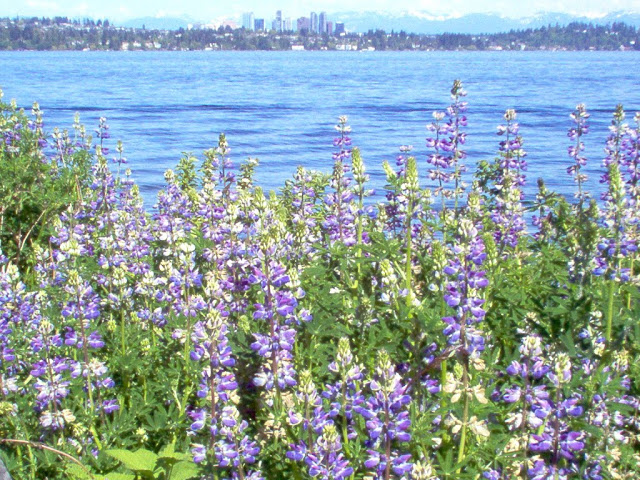 I think I got into quite enough trouble for one day.  That, at least, is what my poor exhausted body is telling me.  Navigating Seattle's not for the faint of heart, but as you can see, it's definitely worth the aggravation.  Even getting stuck behind people on bicycles riding down the middle of Lake Washington Blvd. isn't a bad thing - it lets you go slowly enough to appreciate the scenery.

One o' these days, I'll write up a little treatise on how all this came to be.  I've been reading up on Washington geology, and let's just say that while it's young, it's had an adventurous youth.  For now, though, just sit back, relax, and enjoy the view.
Posted by Dana Hunter at 12:18 AM