Getting My Rocks On

A trip to Kirkland very nearly inevitably means a trip to Earthlight Minerals and Gems, where I always promise myself I won't go over X dollar amount and succeed in only going double it if I'm disciplined.  Today, I almost behaved myself.  But look, there were certain things I had to have.

For instance, there was the rock I actually identified all by myself!  It's a garnet lodged in a piece of mica schist, much like this one: 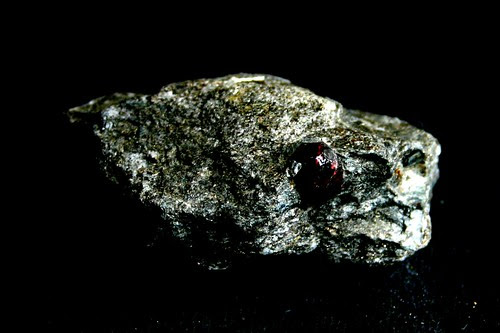 It alone cost what I intended to spend, and it was worth every single penny.  I used to dislike garnets intensely - I'd never seen a good one, just those dull dark red ones you get in cheap jewelry.  Now that I've seen garnets in all sorts of shades and in their natural state, I like them quite a lot, and I'm pleased they're my birthstone.  They're interesting.  They show up in all sorts of things, from metamorphic to igneous rocks, and some of them have a fire that can outshine a ruby.  And that brings us to my next purchase, a spessartine garnet somewhat like this one:

See the fire in there?  Gorgeous!

Now, I had no idea what the hell a spessartine garnet was until just now, but About.com has the answer:

Spessartine is an uncommon garnet, mostly found in granites and pegmatites. It ranges in color from red-brown to yellow-brown. Its orange occurrence is a gemstone known as mandarin garnet.
Spessartine is one of the aluminum garnets, along with almandine and pyrope forming the "pyralspite" group. Its ideal composition is Mn2+3Al2(SiO4)3. Almandine and pyrope have iron (Fe) and magnesium (Mg), respectively, instead of the manganese (Mn).

And, finally, I got a Red Plume Manzanita geode, which is from Mexico, and is one of the most unusual geodes I've ever seen.  It's interior is rectangular rather than circular, and looks very much like opal.  I'd show you a picture, but finding a similar one online would take too much time, and my camera sucketh at ye olde closeups.  You'll just have to take my word that it's teh awesome.

When we went to Waverly Beach Park, of course, I had to sift through the shingle for some pebbles.  And I found a tumbled piece of what I do believe is mica schist, all smooth and sparkly, along with a bit of green jasper and some pretty stones beyond my paltry indentification skillz, and a piece of glass so rounded by the waves that it can easily be mistaken for a bit of quartz.  Fun times.

You know what this means, kids.  Summer rock hounding season is on in earnest.
Posted by Dana Hunter at 1:59 AM

Here's a story that will blow your mind. When I was really young (almost 50 years ago!) my Dad took us kids on a weekend vacation to southern Indiana. The only thing I remember very clearly from that trip was the afternoon he took us out looking for geodes. We traveled down a narrow country road which followed a little creek, then eventually pulled over and walked down to the creek bed...

The creek bed was maybe 30 feet wide, and literally lined with geodes for hundreds of yards in either direction to a depth of at least a foot. They ranged in size from as big as a golf ball to as large as a man's head.

Some of them were paper thin. Don't go into shock here (we didn't know any better), but my brother and I picked up hundreds of them and busted them against the larger ones to reveal some very gorgeous crystal linings. I'm sure we left much of the creek bed litered with shards.

Anyway, we hauled hundreds more up to the station wagon and eventually took them home with us. My dad had a rock saw and for months afterwards would cut them open. It was almost like opening Christmas presents!

I think now if I was somehow able to find that location again you wouldn't find a geode there any bigger than a pea.