This was one.  I know this because I need a vacation to recover from my vacation.

As regular readers know, I made my first-ever trip to eastern Washington over the weekend.  My intrepid companion and I were only gone for two days, but we packed a ginormous amount of activity into that time.  I saw lotsa geology!  So much it'll take me days to sort through it all - not to mention the rocks I picked up.

In the meantime, here's a taste of what I saw and did.  Follow me after the jump for pics.


This is the first time in ages I left the cat alone for a night.  You can see how worried she was: 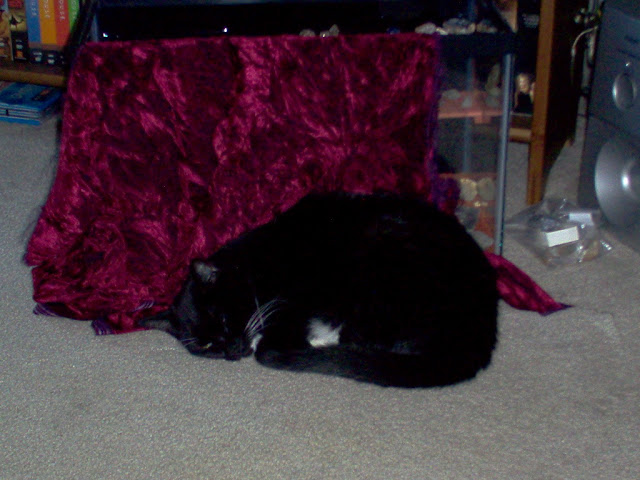 Once you cross the Cascades, you leave lush forests overflowing with life and enter a high desert.  The transition's quick: you go from fir to Ponderosa pines to leafy trees to sagebrush all in the course of a few miles.  But it's not lifeless - there's even flowers! 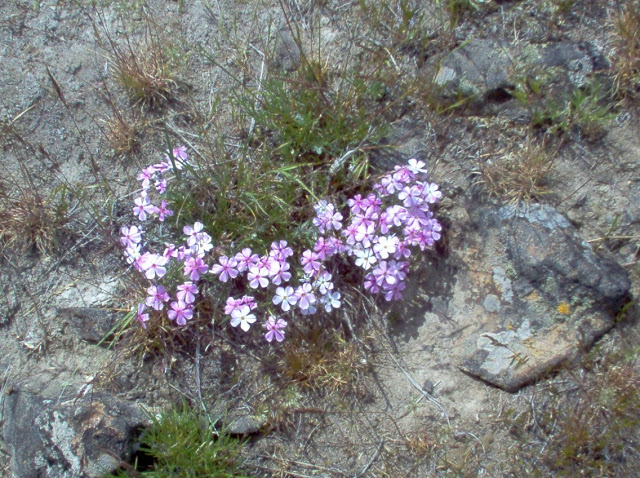 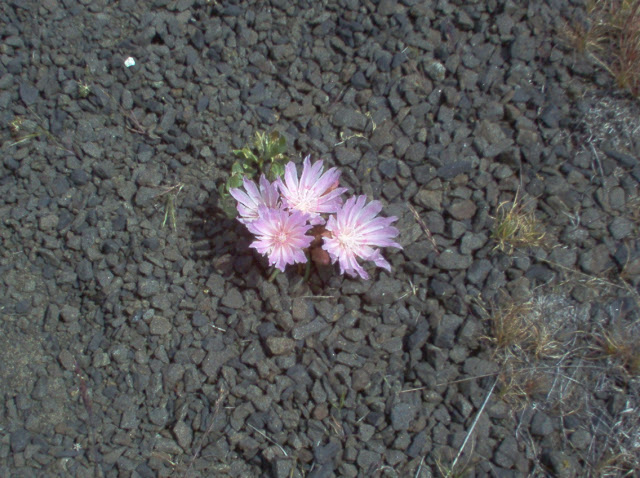 It's amazingly like home out there - it looks like the high deserts around Prescott and Flagstaff, some of the plants are even the same, and it smell just like home, too.  The sharp, pungent, bitter-sweet scents of sun-warmed sage and blooming desert plants weren't different at all.  Flagstaff doesn't have the Cascades, but it does have the San Francisco Peaks, and if you squint, you can pretend you're east of Flagstaff looking back toward the San Francisco volcanic field.  Anytime I get homesick, all I'll have to do is drive an hour or so and go sit at Ryegrass rest area for a bit, looking at lichen on basalt, pretty little plants, and inhaling the desert.  Really, the main difference is that there are wind farms and water in the rivers.

Speaking of water in the river, the Columbia is what we in Arizona would call a lake.  Here it is from the Ginkgo Petrified Forest Interpretive Center, complete with "Danger High Cliff" sign: 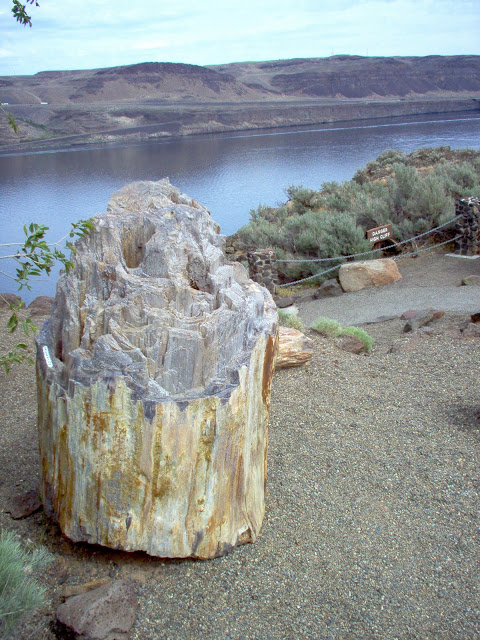 By the way, if you go to Ginkgo, be prepared for the fact that the Interpretive Walk wanders all over a high, hot hill, and the trees are caged up.  It's rather sad: 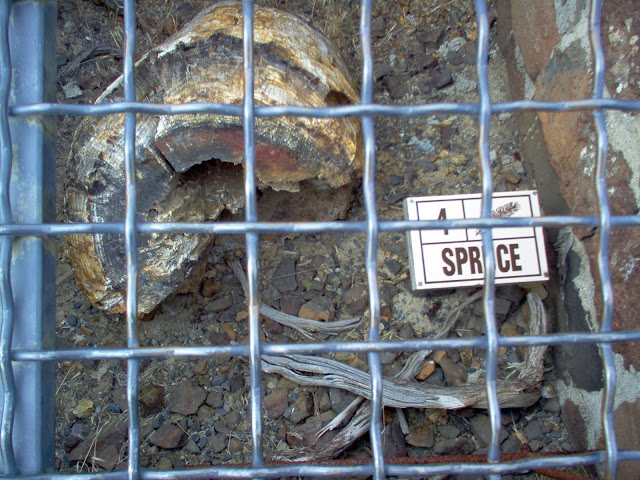 Afterward, having searched in vain for petrified forests not kept in iron cages, we stumbled down to the river to cool off a bit.  Here I am in a distinctly unladylike pose, sitting on a basalt block against a massive cliff of basalt: 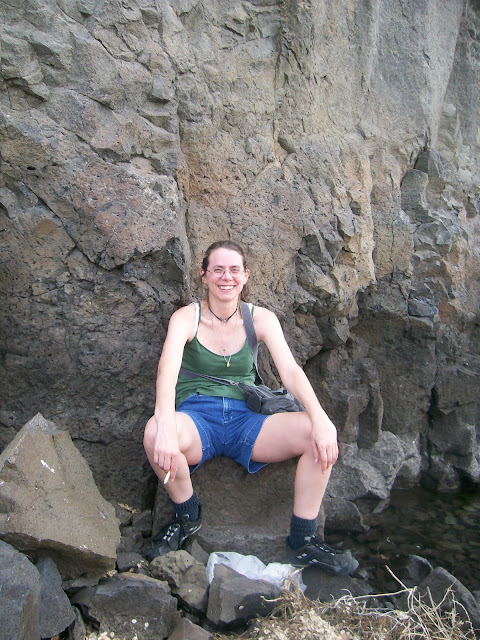 If you zoom in to the rock around my head, you can see the pits left by escaping gasses.  Very cool!  My intrepid companion and his camera do a fine job on the photography.

And then we were on to Grand Coulee.  A place I'd only ever read about, and until you're driving through it, surrounded by water-ravaged basalt cliffs, you can't really comprehend the raw beauty of the place.  It's narrower than I expected, but much more imposing.  Here's a shot up the coulee from near Lake Lenore caves, with the lake itself in the view: 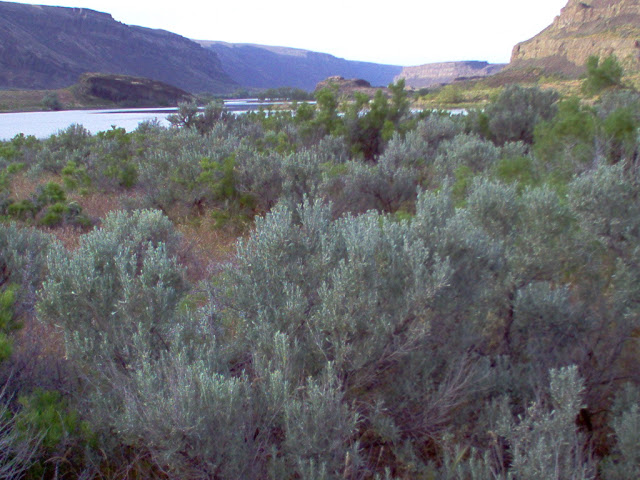 I'll have quite a lot to say about its geology later on.  But it's near sundown, and we're on our way to the city of Grand Coulee, where getting a meal on a Sunday night is a tough prospect.  We made it to Pepper Jack's with only minutes to spare before they stopped serving food.  The steak was good and juicy, served with a baked potato, garlic toast, and for the vegetable a side of lettuce.  We're not in Seattle anymore, Toto.

Afterward, we went for a drive by Grand Coulee Dam, just because I like looking at dams at night, and I actually persuaded my camera to take a decent night shot: 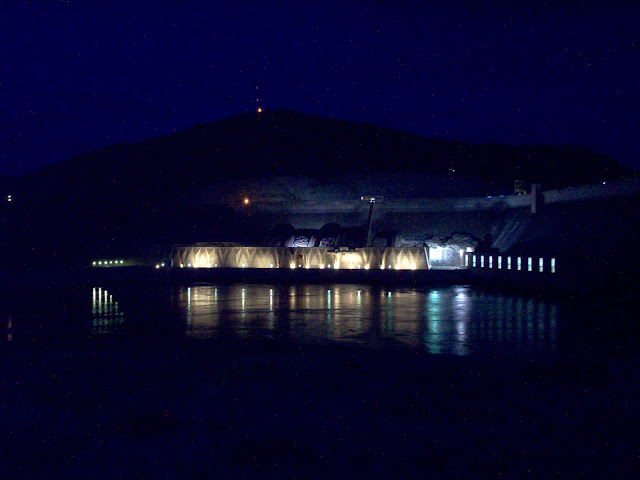 The beautifully-lighted structure is the Third Powerplant, and then to your right you have either the right or left power plant and the dark bulk of the dam itself.  It's not as visually imposing as Hoover or even Glen Canyon Dam, but it's huge and impressive and a lot of fun to visit.  I'll have a whole post dedicated to it when I get round to it - we did the tour!

Here it is by day: 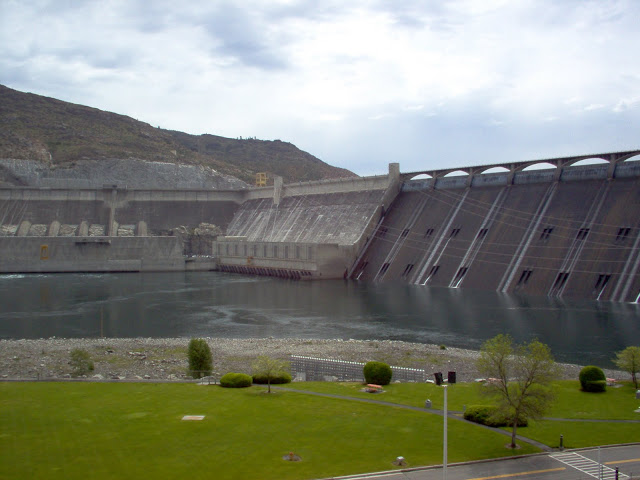 And inside the visitor's center, you can find a wall o' jugs.  Water from the states and territories was spilled over the dam by pretty young women to give it a good start in life.  I found it amusing that water from the state I was born in and the state I grew up in were right atop each other: 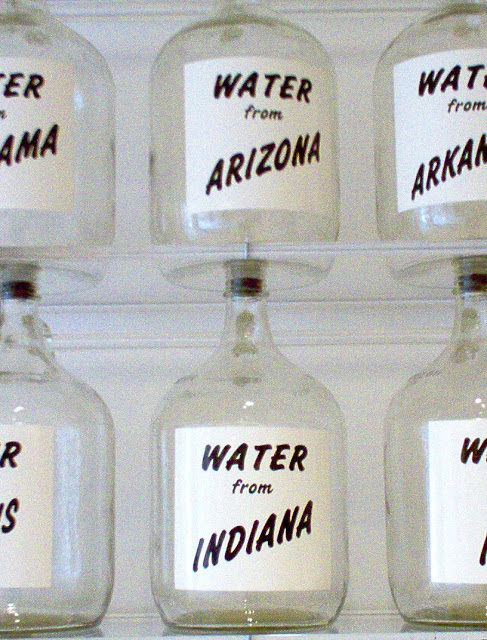 Some of you wags may question whether there's any such thing as Arizona water.  I can assure you there is - at least enough to fill a jug.

Afterward, we headed back down Grand Coulee, stopping often to grab photos of various and sundry geological features.  I collected a few pounds of rocks fallen by the highway, beautiful examples of various granites and basalts that were crumbling off cliffs.  And then we found an extraordinary example of a hanging waterfall, where my intrepid companion was kind enough to snap a photo of me: 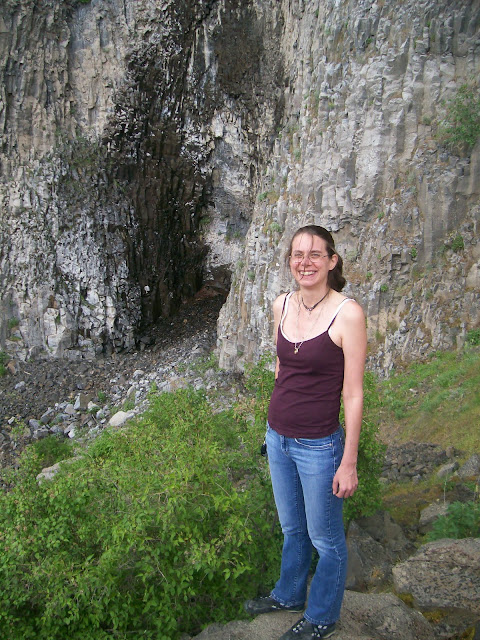 In wet weather, these falls gush down the cliffsides.  Most of them were dry that day, but this one had a trickle of water chuckling its way down to a pool below.  You can see how the rock is damp right there.  Big chunks of basalt columns had broken off and lay on the ground like ruins of ancient temples.  It was very, very neat, and I spent a goodly amount of time there just drinking in the sight and sound of it.

Then it was on to Dry Falls, where we experienced wind, rain, and tremendous views: 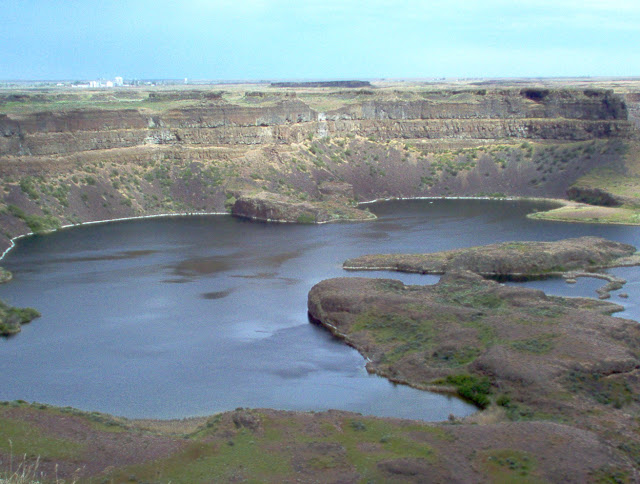 Someday, I'm going to go back and hike to the base of those cliffs.  Someday.

I'd purchased Geologic Road Trips in Grant County, Washington while we were at the Ginkgo Petrified Forest, and it had a little bit on a place called Summer Falls, where water actually does pour over those cliffs during the irrigation season.  They're only a few minutes away from Dry Falls, so we went, and by the time we got there, the wind and the rain had died down, the skies were brilliant blue, the sun shining, and the butterflies fluttering.  I lay in the grass, and the next thing I knew, my shoes were adorned with butterflies.  At one point, we got up to five or six of the buggers, all busily wandering around my footwear.  It wasn't easy, but I got a shot of shoe, butterfly, and falls: 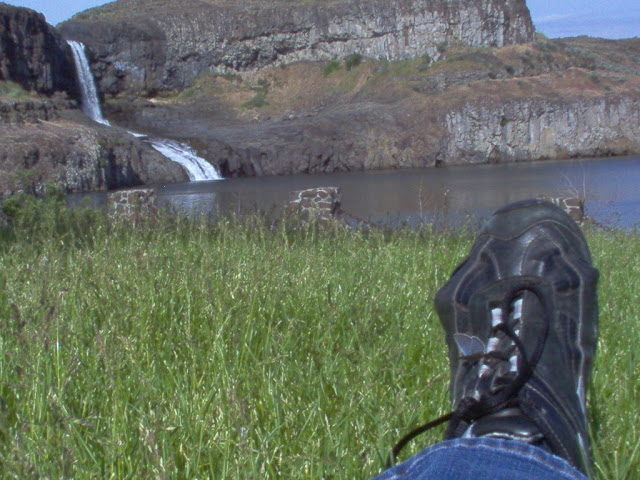 And here's one with a butterfly wandering around my toes with the little lake in the background: 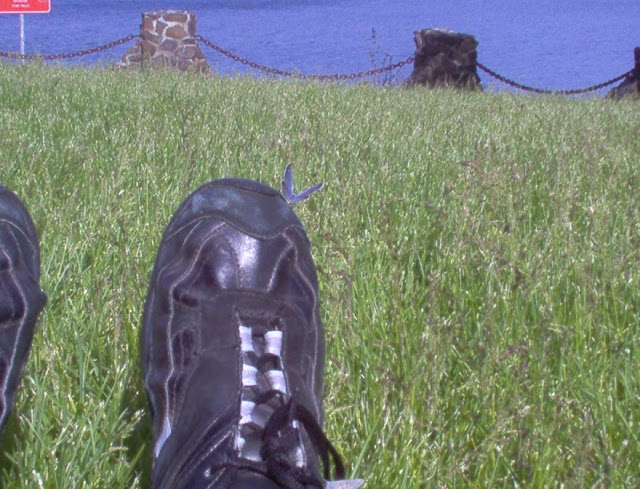 Aren't they wonderful?  If you go here in May, bring something dark, lie back, and wait for the butterflies to land.  They're friendly little buggers.  Beautiful, too - my intrepid companion took a close-up of the ones wandering around my bag, and you can zoom in to see their lovely bluey-purples and their adorable spots: 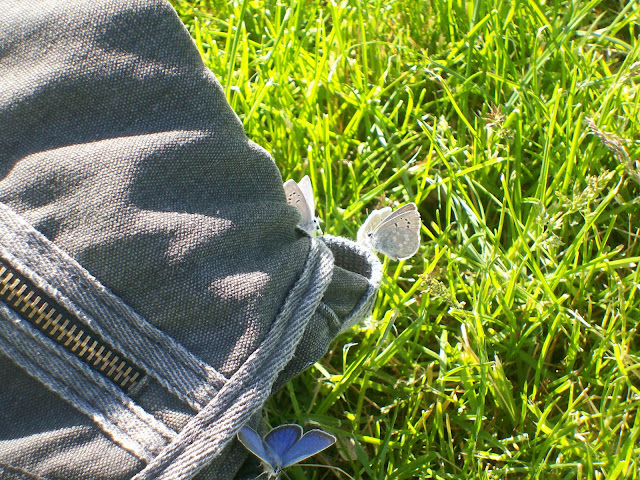 And then, after a long time lingering with the roar of the falls and the chirping of birds and the beaming of sunlight, photographing butterflies as they used us for their amusement, it was time to go.  I want to tell you something.  It wasn't sunny at the top of the Cascades.  It was, in fact, peeing down torrential rain, the road was practically a river, and I don't think even the hike around sun-beaten hills took as much out of me as trying to drive through that stuff.  Quite a difference from the idyllic little scene we'd enjoyed just a few hours before.  But we made it home.  And after a full day spent doing nothing much else but sleeping, reading, sleeping, eating, sleeping, and writing this post, I feel almost normal again.

Good thing, too, because vacation's over.
Posted by Dana Hunter at 12:46 AM

Thanks for the amazing pictures, and the lovely butterflies. You take fantastic vacations.

Felt I have been out on vacation to all those places myself. Lovely pictures. All fresh and lovely including you. :) I am going on vacation myself. My vacation starts tomorrow.I think I might end up going to the same place. :)