The Fruits of Mah Labors

Today, I dragged my poor intrepid companion along for some research work, which entailed driving to downtown Seattle and spending most of our day finding a parking space.  Parking is next to impossible when every single person in Seattle has decided to visit the city on the first sunny Sunday in May.  After we found a parking space, we went walking in my characters' shoes.

My characters, incidentally, do a fuck of a lot of walking.

I got some pretty pictures out of it, so I thought I'd share some with you before I go collapse and die.  Join me after the jump for some highlights from the Emerald City. 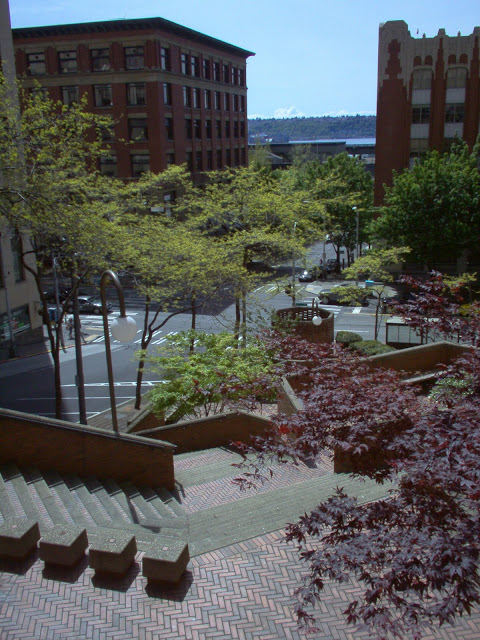 This is the hillclimb by the Burke Building, a pretty little nest of brick, benches and beautiful views.  There's a sliver of Sound in the distance, even!  We lingered here because it seemed like a convenient place for FBI agents to eat their lunch when they're in the office, so one day, my characters probably shall. 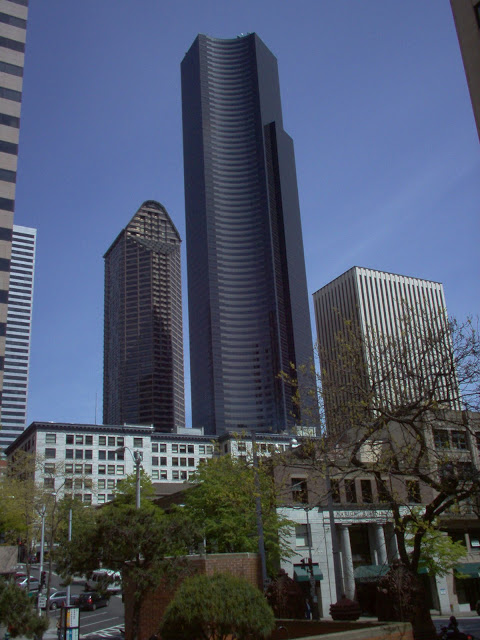 Ye olde humongous black skyscraper is Columbia Center, the tallest building in Seattle.  It is damned hard to photograph skyscrapers with my camera, so I feel rather proud of this one. 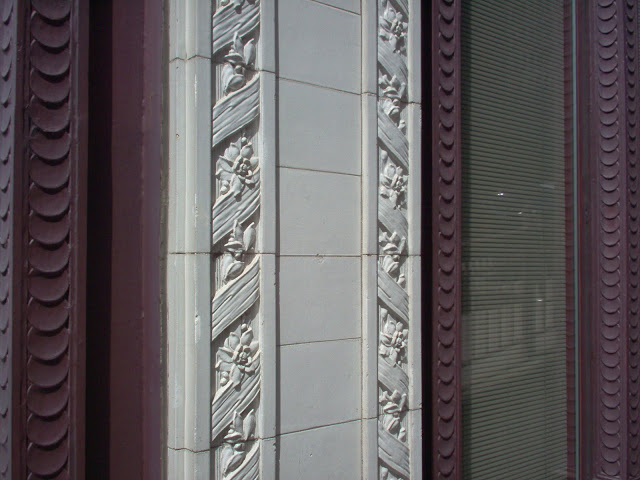 Detail of a pretty building on 2nd Ave & Spring St.  Just cuz I likes it. 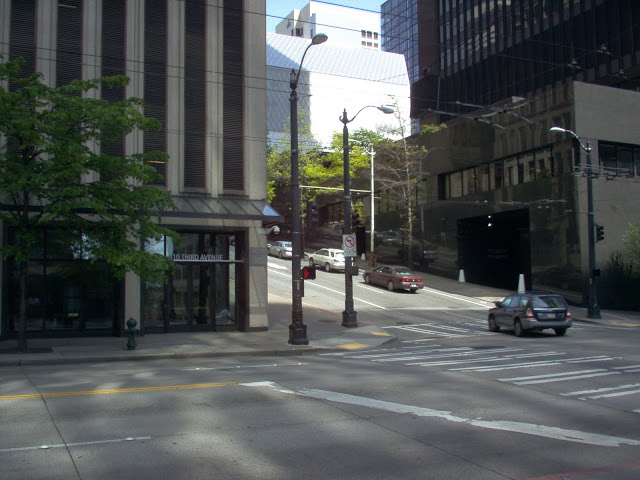 The FBI's Seattle Field Office.  It's in the Abraham Lincoln Building.  That's where my characters work!  It's kind of odd, standing outside on pavement they pound several thousand times in this novel. 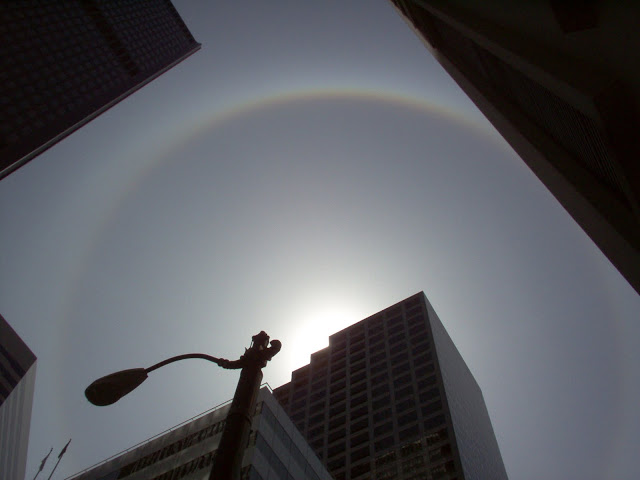 As we were standing beside the field office, my intrepid companion noticed a perfectly awesome halo around the sun.  I'm amazed my camera captured it. 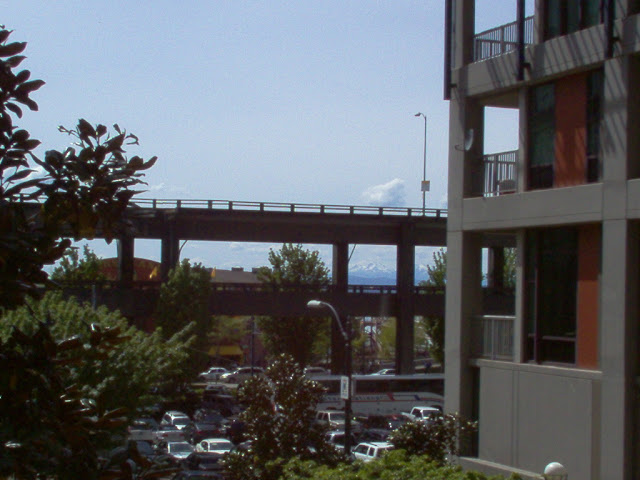 After getting coffee at the Seattle's Best near the field office, where my characters had a screaming argument on the street, we headed down Post Avenue to the Harbor Steps, where my characters once ate lunch and had a productive conversation.  I love this photo from the Steps, because if you look between the decks of the Alaskan Way Viaduct there, you can see the Olympic Mountains.  The Olympics were out in full force today, and they were gorgeous. Looking up the Harbor Steps toward 1st Ave., where you can see 1201 Third Avenue, the second tallest building in Seattle.  Two skyscrapers in a day!  Woot! 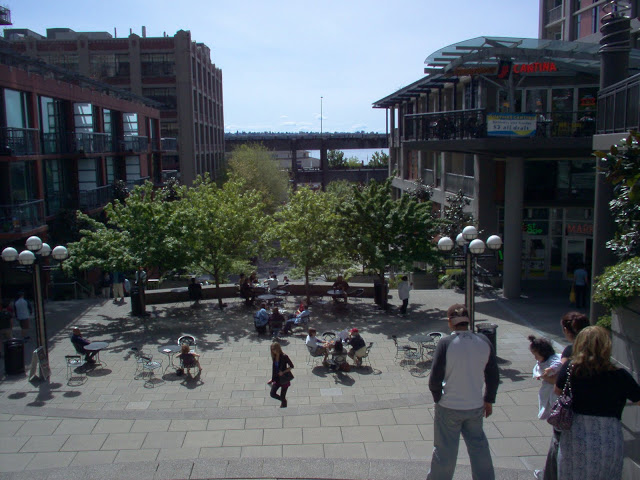 And here is the view from the fountain, where my characters were sitting.  Outstanding, innit? 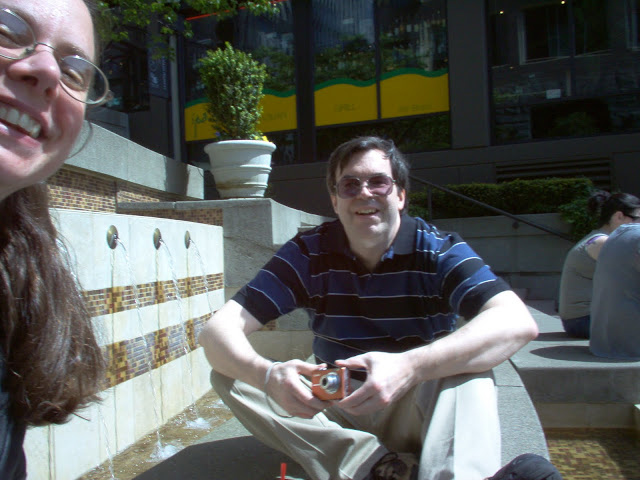 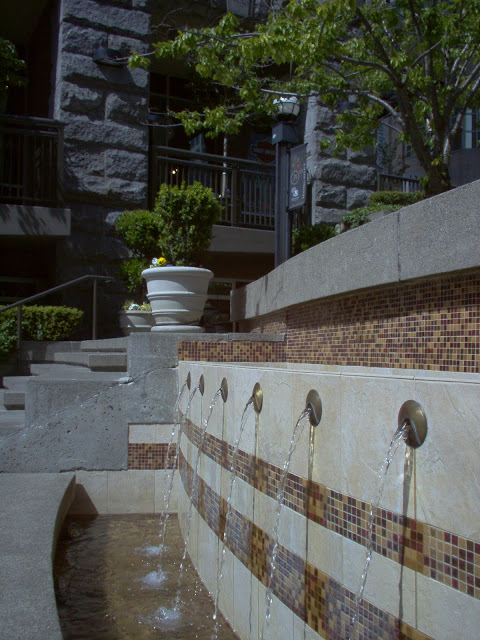 Detail of the fountain.  It makes a lot of very soothing noise, which helps drown out the squealing children, and you can actually feel the force of the water vibrating the concrete where you sit.  It's pretty damned awesome is what it is. 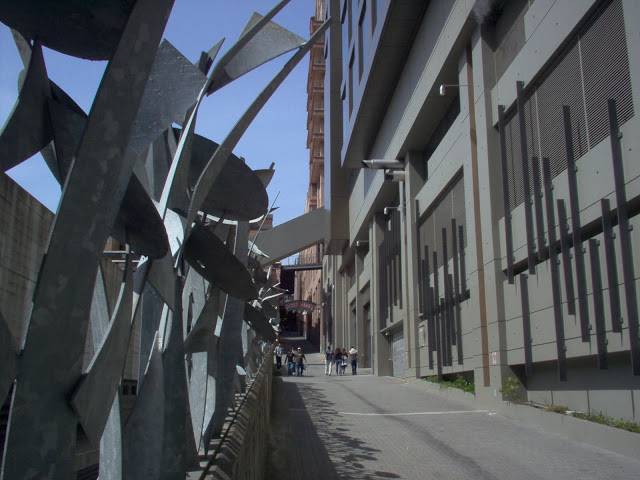 As you're going up Post Alley from the Harbor Steps, there's this metal sculpture thing by Ann Sperry called "Seattle Garden," which shields bits of the brewery from sight. 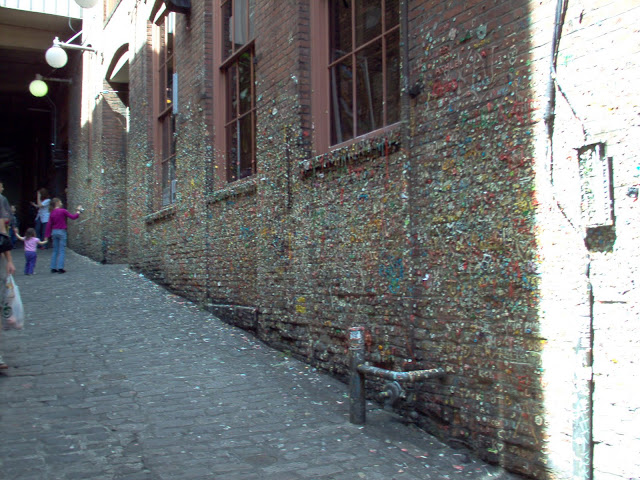 Then you come upon the wall o' gum, where people for some reason started sticking their gum and the whole thing just sort of spiraled out of control.  There's gumball machines in the doorway to one of the shops if you haven't got gum.  Some people have even drawn happy faces and other pieces of art with theirs. 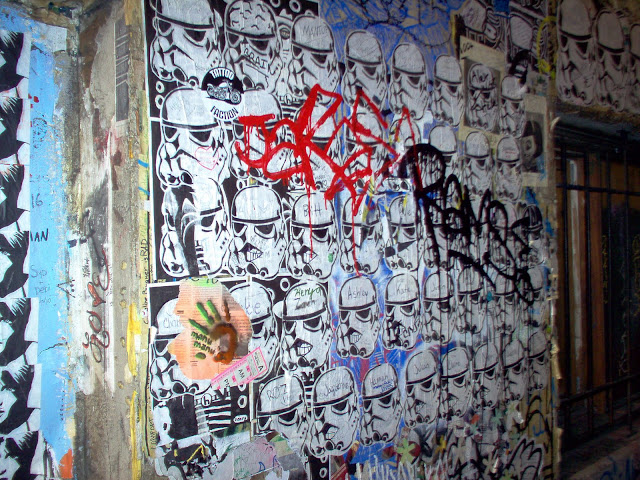 And a wall near the Alibi Room covered with stormtroopers.  How awesome is that? 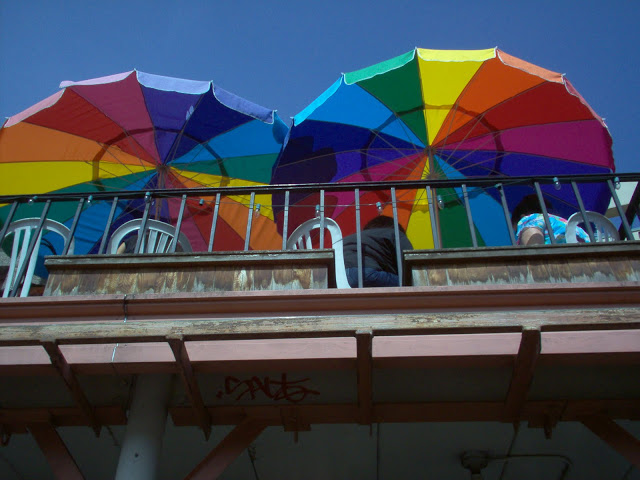 Umbrellas above the Market!  This is the second story balcony above the shops just across Pike Place from the public Market itself, where the Copacabana is.  And see?  Blue skies!  We gets them! 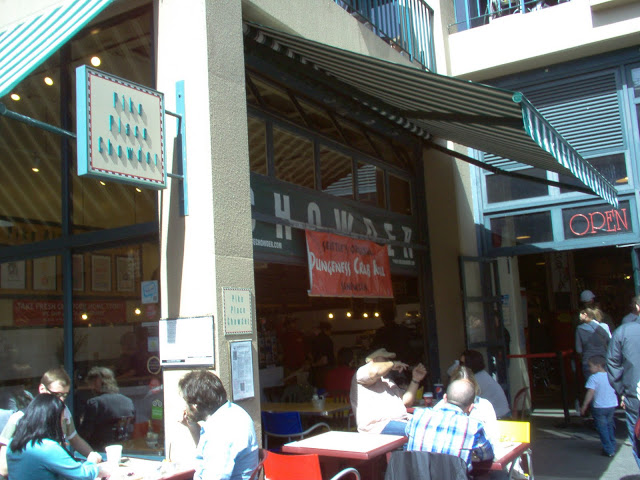 This is heaven.  Pike Place Chowder (seen here with one of the walls open, is that not teh awesome?) has a seared scallop chowder that I could happily subsist on for the rest of my natural life.  I don't get it often enough.  I want them to open a shop in the apartment next door.  It's vacant, and all we'd have to do to get the owners and city officials to agree is give them a cup of seared scallop chowder.  I cannot describe the flavor, because I am a poor wordsmith compared to the glory of that ambrosia.  Suffice it to say it turned me from chowder-hater to chowder-lover in 2.2 nanoseconds.  Miracles do happen, and they also come in sourdough bread bowls if you're so inclined. 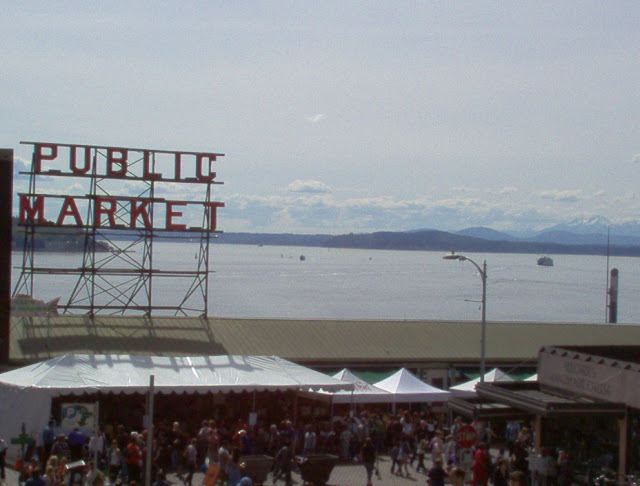 Market sign and glimpse of Olympic Mountains across the Sound.  Refer to this picture if you ever wish to ask me if I plan to move back to Arizona.  This should answer that question, even if they chuck the cons out and roll back the police state tactics.  Besides, there's no Pike Place Chowder in Arizona. 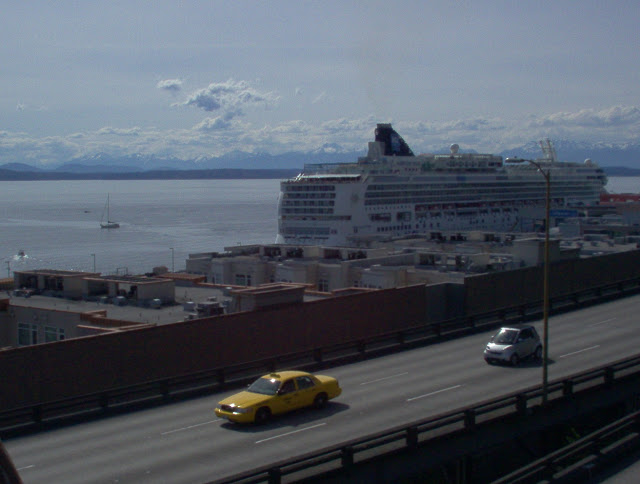 There's a little park that overlooks the Viaduct at the end of the Market, and here you see a gorgeous view of the Olympics and a bloody great cruise ship.  It is a fantastic place to bring your chowder and eat it.  Today, we had buskers playing classical violin, which adds a certain ambiance to the proceedings. 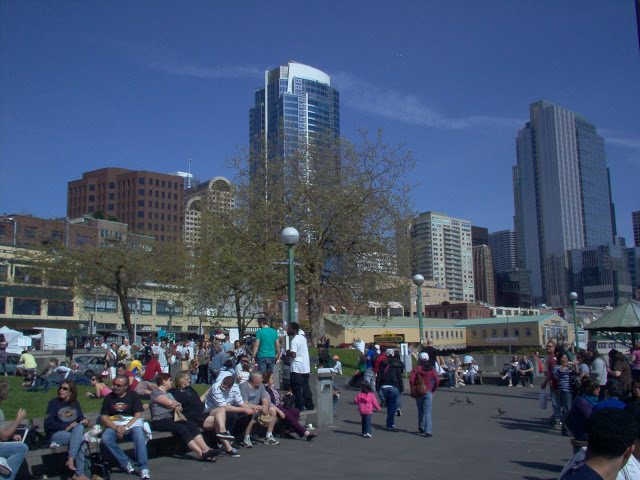 City skyline, looking over the Market.  This city is a confection. 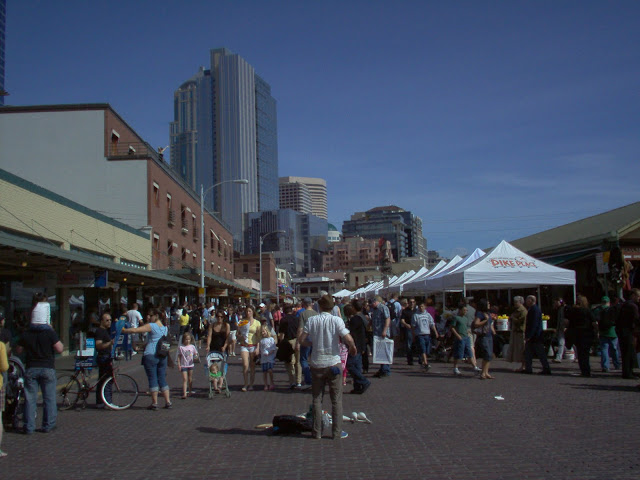 Here's a fun one: on your left are the Post Alley-side shops, in the middle is Pike Place and a solid sea of humanity, then booths, then the Public Market to your right.  They close off Pike Place a lot to do things like set up booths and hold events like cheese festivals.  Today, there was a lot of magic going on in the Market, along with jugglers and some dudes with Rubik's Cubes.  You never really know what you're going to get when you come here. 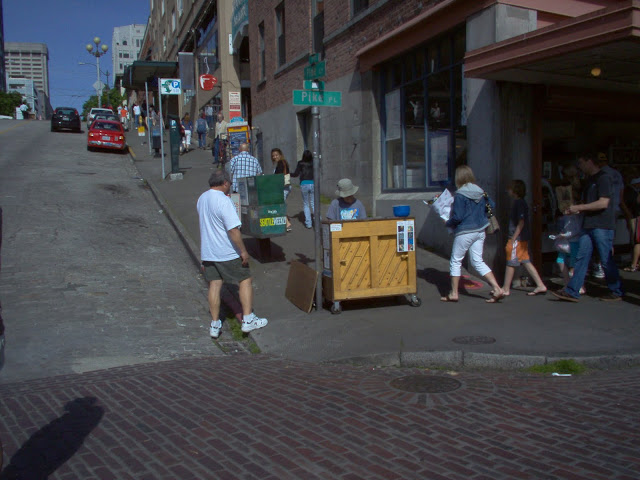 Well, aside from the piano man.  He's pretty much a fixture.  Lots of buskers down here - there was even a goth girl with an accordion today, which I thought was fairly fascinating. 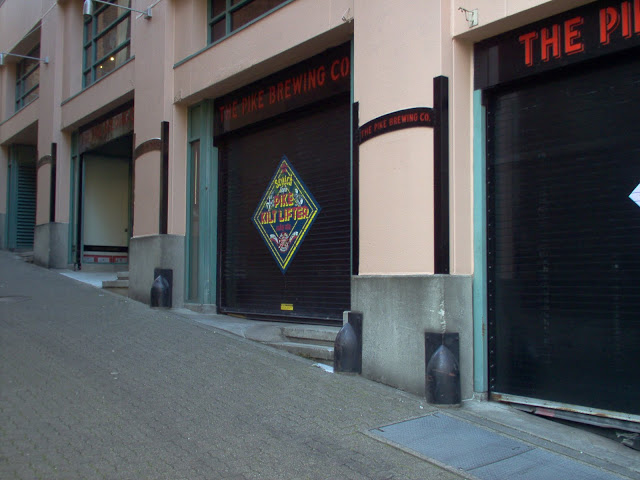 Back to Post Alley, where Pike Place Brewing has a bunch of loading bay doors painted with their labels.  I love Kilt Lifter.  It amuses me. 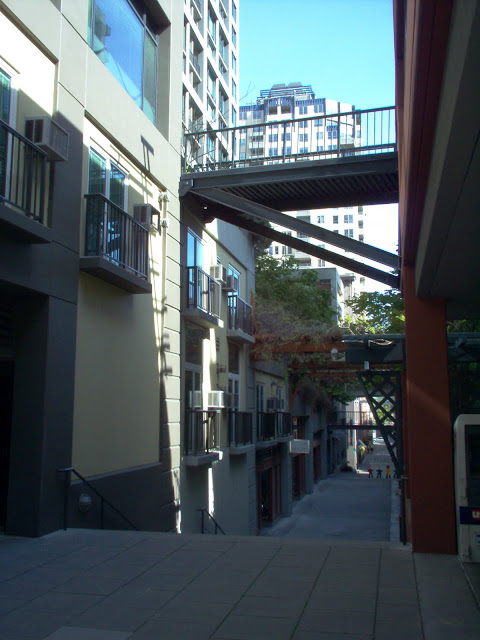 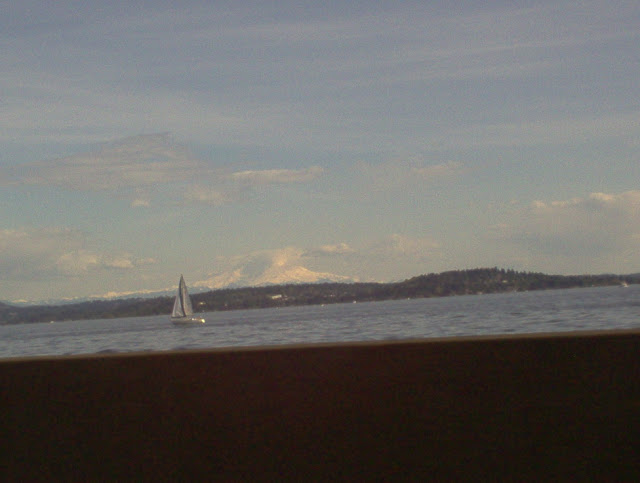 And, to finish the day, Mount Rainier and sailboat, snapped from the car on the 520 bridge.  The views in this city are outstanding.

I got a hell of a lot of research done today, thanks to my intrepid companion.  Muchas gracias to him, and also to my characters, who have made me really pay attention to the beauty around me.  It's been a tremendous amount of fun experiencing the city through their eyes.  I hope you had fun yourselves.

More adventures to come.  And we're going to Grand Coulee this weekend!  Finally, dry dirt beneath my feet!  Woot!  I'll bring ye back plenty o' pretty pictures, my darlings.
Posted by Dana Hunter at 3:40 AM

Thanks for the lovely photo-essay of Seattle. I visited once, many years ago, and remember it to be as beautiful as you've shown it. As for your outing, mine was on a sunny day -- and maybe that's the key!