I wish I'd had The Fire Below Us recorded when I did the Mount St. Helens post last week, because it's led me to some awesome extra stuff.  At the beginning of the program, they play the audio of David Johnston's last transmission.  I'd never actually heard it before.  He sounds excited and rushed, the consummate geologist doing his job in the most intense of circumstances, an instant before his death.

That got me to searching the intertoobz for a recording, which I didn't find.  But I did find this amazing audio of the eruption, recorded by a young man in Newport, Oregon who was wise enough to think that maybe those thuds were worth getting on tape.

Then I stumbled across Alan Levine's post on St. Helens's anniversary, which contains this astounding photo of a pyroclastic flow, which I'll let Alan tell you about: 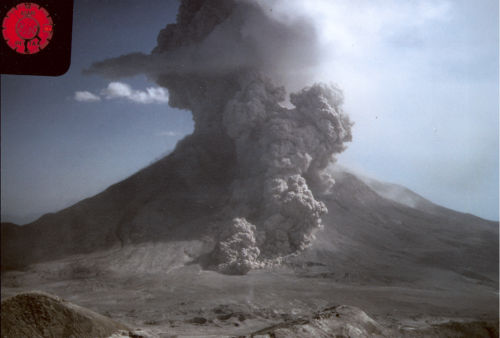 In graduate school, I ended up studying past volcanic activity. I dont recall a decision to be safe and not follow the live eruptions, it just was the flow of my interest at the time. One project I worked on was studying a later, smaller eruption at Mt St Helens in 1980, on August 7. This one was of interest because Rick Hoblitt, another USGS field observer, had captured a series of photos of the front of a pyroclastic flow as it cascaded down a channel of the volcano, and since his camera had a time stamp, he was able to calculate its velocities by location the front of the flow on a map.

You know what, that takes balls of adamantium right there.  I mean, we're talking about snapping photos of the front of a pyroclastic flow.  Y'know, the stuff that can move at speeds approaching 90 miles per hour and run anywhere from 600-1350 degrees Fahrenheit.  I know that the only reason I'd be snapping such a series of pictures is because I'd be figuring, "I'm dead whether I take cover or not, so why the hell not?  Maybe the film won't melt, and the folks who find my body will have pics that grant me posthumous fame."  It would have nothing to do with being cool under pressure and being a consummate professional and all that, and everything to do with mind-numbing, fatalistic terror.  Only, you'd never catch me snapping a series of shots of a pyroclastic flow in the first place because the closest I ever want to get to an explosively erupting volcano is roughly two to three states away, depending on the size of the state.  So the next time I go drinking, I'm raising one for David, and one for Rick's adamantium balls.

While we're at it, let's have a cold one for Dave Crockett.  He's the gentleman Cujo mentioned in his comment to that post, who was caught by the eruption and videotaped the ordeal.  Here's the news report, raw footage and all:

And with that, I must away to bed, or else I shall faceplant in the fossils.  I leave you with my sincerest wishes that you not get to witness a volcanic eruption quite that up close and personal unless you really really want to, and then I hope you're as fortunate as Dave Crockett.
Posted by Dana Hunter at 5:09 AM

Email ThisBlogThis!Share to TwitterShare to FacebookShare to Pinterest
Labels: volcanoes

I'm fascinated by the events of Mount St. Helens as well. My third novel, just released last January, is a romantic suspense with the sub-plot of the 1980 MSH eruption. I used the actual events surrounding the eruption and wove a story around it. Researching for the book was wonderful.
www.MaryTrimbleBooks.com