Not that I've had time to indulge recently, but I look back upon the days when I could spend several weeks in pursuit of nothing in particular with great fondness.

Sometimes, when you're stuck in a rut and feeling about as dull as unpolished lead, just doing something mindlessly creative is the best escape. I discovered this by accident many years ago when suffering from a massive case of writer's block. I turned to crafts. Don't ask me where the wild hair came from, but I decided that what my house really needed was a diorama of a Japanese village. Off to the craft store I went for rice paper scraps, sticks, paint and glue. Then I spent a few weeks building mah village. I never finished the damned thing, but it graces one of my bookshelves well enough, and Misha seems to enjoy it, which is really all that matters:

You'll note that it's standing in a small box of sand. That is one o' my patented Zen Gardens, in fact. They're another thing I build when I'm feeling a little non-creative. I decorate them with rocks taken from interesting places I've been. I believe most of the rocks in these two came from Flagstaff, with maybe one or two from the California coast. I guess my next project should be marking the rocks with their damned origins.

One day, hopefully before she dies or is too old to see it, me mum will be getting a ballerina doll. As much as I like building when I'm blocked, I like sewing by hand, too. I suck at it. It takes flipping forever. But I like figuring out ways to compensate for my complete lack of textile talent, and for a while there I could sew beads onto petal-shaped pieces of fabric in a nice vine pattern like nobody's business. And Mom will love it no matter how much it sucks - she's my mom.

My other great love which I'm no good at is drawing. I haven't had the opportunity to bust out the Wacom tablet lately, but when I do, I can lose myself for hours in trying to force my paltry skills to achieve the desired results. Someday, eventually, I'll have brilliant relief maps of my worlds put together - or so I like to think. I've at least managed to get Cariicedraas somewhat done: 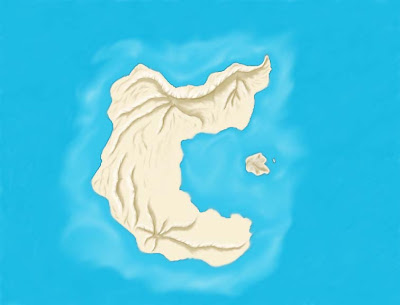 The best thing about all of this nonsense is what it leads to: a veritable flood of creativity. I get so focused for so long on the minutiae of colors and textures and trying things every-which-way until they work that my subconscious mind gets a chance to work without the fetters of my dreaded Inner Editor. Every time I've spent a few weeks doing creative things that have not that much to do with writing, I've ended up inspired. I think it has something to do with taking the pressure off, and something more to do with thinking in entirely different ways. I've noticed that theme with a lot of people who have to think their way to solutions, including scientists: they had their flash of brilliant insight after they gave up and started playing with other things.

So if you don't already, the next time you're stuck, go play. Indulge in your favorite creative wastes of time. You can tell people honestly that you're hard at work.
Posted by Dana Hunter at 3:31 AM

A Wacom tablet?! I'm extremely jealous. I just can't bring myself to invest that much $$ in one, but man are they awesome. I've seen them in action and it makes drawing in photoshop about a MILLION times easier than using a mouse. The only bright side I can find to not having one is that it probably keeps my marriage healthier.

Mike, darling, stop denying yourself. They're not so terribly expensive - mine was only $200, and that seems so damned cheap compared to the benefit. The marriage health issue is a little more problematic, but I'm sure Mrs. Big Stick has some secret wish that, should it be granted, would keep her just as occupied as your tablet would keep you, and make you the hero in her eyes. ;-)

New purses don't seem to have the same long-term benefit as something like a Wacom, but you may be right about some sort of trade-off. I've got a project for the spring that this would make a whole lot easier.

Do you use yours with Photoshop or something else?

Okay, here's the real beauty: the Tablet came with Adobe Photoshop Elements AND Corel Paint. Squee! I need to bite the bullet and get the full version of Photoshop one o' these days - I know I could do far, far more with it - but for now, this works nicely. That island was done in Elements, f'r instance.

What you need to do is discover something for your wife, like scrapbooking or model-building or some other time-consuming craft that entails supplies and a non-underfoot husband. Purses certainly won't do it. Neither will jewelry, sad to say, unless it's not so much buying as designing.

I learned an important lesson from my mother: if you want a new toy (in her case, horses), first obtain for the spouse something that is equivalent (in this case, model airplanes). They managed to stay happily married with their own separate toys until she went all bipolar.

She had it down to an art: before she got herself something like a new saddle or some such expense he wouldn't be impressed with, she'd get him the latest model he'd been salivating over. He could hardly argue after that, and was actually too busy to do so.

Find equivalent leverage, and your wife may thank you for buying yourself a Wacom tablet.

Hope that advice from experience has you owning one before spring. ;-)

I have Elements, but I agree, full Photoshop would be fantastic (though incredibly expensive). Right now it meets most of my immediate needs. I've always heard that full Photoshop is better for photography than for illustrations, but without exploring it myself, i don't know.

I really don't know anything about Corel Paint.

My wife is actually great about letting me buy what I want. Lord knows I have thousands tied up in hunting gear. The problem is she has NO hobbies. Personally, i don't know how a person goes through life without any hobbies, but it seems to work for her. She likes mini-projects like organizing our photos, but no long-term life pursuits like the 2 million hobbies i have. I need to work on that...

Heh. That makes two of us on Corel Paint - haven't got that one figured out yet.

What the hell does your wife do without hobbies? Or does she consider you hobby enough...

I guess that's a hobby. And she also compulsively cleans the house.