When I got up and checked the weather, and saw they were predicting up to six inches more of fresh snow, and noted that the road out of our valley hadn't been sanded, and then got a load of the images on the traffic cams (but not the ones in my neighborhood or near ye olde workplace, because they froze solid and aren't functioning), I said not no but fuck no. Staying home. Not that I'm happy about it - every day away from work is less money and more anxiety. But you know what? I value my life more than my job, and I can eat ramen if I have to.

I almost got t-boned yesterday venturing out to the grocery store by a dumbass in a wanna-be monster truck who thought he could stop on ice, and that was before the snow started coming down again.

So I've had plenty of time to spelunk around the intertoobz (in between obsessively reading weather updates, watching traffic cams, and venturing out to eyeball the roadway). I can't say that's made me any happier.

It appears our military command has the same plans about leaving Iraq as I do about venturing from the house tonight:

There's a lot of fluff about bi-partisan agreement, withdrawing to leave a democratic Iraq and the "successes" of the last two years in an op-ed by John McCain, Joe Lieberman and Lindsey Graham in the Washington Post today. But there's only one important bit.

Gen. Odierno was the operational architect of the surge in 2007, when he served as deputy to Gen. Petraeus, as well as of the tribal engagement strategy that persuaded Sunnis to abandon the insurgency and join our side. Gen. Odierno -- as the current commander on the ground -- is the person whose judgment should matter most in determining how fast and how deep a drawdown can be ordered responsibly.

This is the same General Odierno who recently forgot his place in the chain of command, saying that he had no intention of sticking to the U.S. agreement with Iraq which says all U.S. troops must be withdrawn from Iraqi cities by the summer. He also hinted that the 2011 final withdrawal date might be ignorable, saying "Three years is a very long time."

The Maliki government was quick to respond that it expected the letter of the status of forces agreement to be adhered to. But Bush administration loyalist Odierno, by indicating that the U.S. would continue to try to bend treaties and deals all out of shape instead of sticking to its word, has badly damaged Obama's political capital abroad before the President Elect has even taken office.

But on Charlie Rose midweek, Bob Gates was clear that withdrawal doesn't mean withdrawal, not by a long chalk.

ROSE: As far as you understand it, how many residual forces will be left [in Iraq] after 2011?

GATES: Well, I think that remains to be seen, and first of all, because any forces remaining there after the end of 2011 will have to be there as a result of a new agreement negotiated with the Iraqis. So they will clearly have a voice in how many are there as well.

ROSE: If they say none, it’s none or not?

GATES: That’s absolutely right. They are a sovereign country, and if they tell us after the end of 2011, we want you all out, I think we have no choice but to do that. I think that just in a ball park figure when I think of the support that they likely are going to need for their air force, for their navy, for counterterrorism, for continued training, for intelligence, for logistics and so on, my guess is that you’re looking at perhaps several tens of thousands of American troops, but clearly, in a very different role than we have played for the last five years.

Gates went on to say that these "several tens of thousands" of troops - the equivalent of at least ten brigades - wouldn't have a combat role, but this is still clearly parsing "complete withdrawal" as required by the SOFA beyond the boundaries of the language.

It's nice that he's nodded toward Iraqi sovereignty, but I do believe he's having a hard time understanding that no means no.

Just how much of a fight is Obama likely to have on his hands if he tries to stick to the 16-month withdrawl timeline? Oh, mercy:

Here’s the more complete story thanks to Gareth Porter’s important analysis at IPS: He begins by discussing how Gates, Mullen, Petraeus and Odierno are taking this further: (emph. added)

U.S. military leaders and Pentagon officials have made it clear through public statements and deliberately leaked stories in recent weeks that they plan to violate a central provision of the U.S.-Iraq withdrawal agreement requiring the complete withdrawal of all U.S. combat troops from Iraqi cities by mid-2009 by reclassifying combat troops as support troops.

The scheme to engage in chicanery in labeling U.S. troops represents both open defiance of an agreement which the U.S. military has never accepted and a way of blocking President-elect Barack Obama's proposed plan for withdrawal of all U.S. combat troops from Iraq within 16 months of his taking office.

Apparently, these fucktards don't understand that both the Iraqis and the American public want our troops out. Gone. Vamanos. No mas. And reclassifying them pulls no wool over any eyes, aside from the willfully-blind neocon chickenhawks.

Lube up your vocal chords and work on your lung capacity, my darlings. It seems we're going to have to start screaming here quite soon.

We can practice on Darth Cheney:

On Fox News Sunday today, host Chris Wallace asked Vice President Cheney, “if the President, during war, decides to do something to protect the country, is it legal?” “I think as a general proposition, I’d say yes,” replied Cheney.

Cheney went on to defend the administration’s actions over the past eight years:

CHENEY: There are bound to be debates and arguments from time to time and wrestling back and forth about what kinds of authority is appropriate in any specific circumstances, but I think that what we’ve done has been totally consistent with what the Constitution provides for.

No, Dick, it fucking well has not:

Examples abound at the original link. I'm sure you can come up with a few dozen on your own as well. It's not like we're starved for choice - if Bush & Co. touched it, they probably violated the Constitution, spirit and letter.

That's only one among many outrageous statements by Cheney lately. It's getting hard to keep up with his prolific bullshit. And if you want to know how much class he hasn't got, check out his excuse for telling Sen. Patrick Leahy to fuck himself. I think he does it just so he can feel the tingle of Bill Kristol's lips on his ass.

In less than a month, now, Cheney will be on his way having his ass kissed in a new undisclosed location, and the Dems will take over. You know what this means. Every right-wing "think" tank and organization in the country is gearing up to attempt to scare us shitless. Here's a charming example from the Heritage Foundation:

In February 2009, the conservative think tank, the Heritage Foundation, is coming out with a high-definition film called "33 Minutes". As Jeffrey Lewis at Arms Control Wonk points out, it's basically an infomercial for Star Wars Episode II, the latest missile defense shield proposal.

The trailer is both hilarious and depressing; it's hard to believe that they think anyone would actually fall for the hyperbole.

Lt. General Robert Gard (USA, ret.), chairman of the Center for Arms Control and Nonproliferation, launches a fabulous attack on the ad and the Heritage Foundation.

First, Heritage commits the ultimate faux pas in national security analysis: It proposes a solution that doesn't achieve their primary objective. Robert Joseph, a committed arms racer and intellectual heir to John Bolton, says early on in the video that "my number one concern today is a terrorist with a nuclear weapon." A legitimate fear, to be sure, especially when you consider that the final report of the bipartisan Commission on the Prevention of WMD Proliferation and Terrorism predicted that such an attack will "more likely than not" occur somewhere in the world by 2013.

The problem, of course, is that missile defense won't stop nuclear terrorism. How exactly will missile defense interceptors in Europe stop a terrorist with a small nuclear explosive device from entering the United States through Canada? Or prevent a shielded nuclear device, invisible to cargo detectors, from being smuggled into a U.S. port aboard a ship? Missile defense, obviously, is useless against these kinds of terrorist attacks.

Second, Heritage is guilty of fear-mongering without supplying the appropriate facts and context. That is the height of irresponsibility.

In other words: GOPSOP. GOP standard operating procedure. And you know they're only going to get worse.

Estimates vary, but the National Rifle Association reportedly spent about $15 million in 2008 on attacks against Barack Obama. The group is no doubt frustrated, not only with the election's outcome, but with its inability to have a serious impact on the campaign.

So my phone rings today; and after that 1.5-second delay that tells you it's not a beloved friend, a guy comes on the line and says his name is Chris White from the NRA. Do I want to listen to a message from Wayne LaPierre about "Obama's scheme to ban guns?" You bet I do.

So Chris presses play and suddenly Wayne's voice is blasting in my ear at three times the decibel level of the human being who spoke first.

Wayne says that Obama's assurances that he will respect gun rights are "an outright lie."

Obama has been "stacking his administration with the most notorious gun-banners in America."

Wayne says he wants to "send a message loud and clear that the fight for our freedom is not coming. It is here and now."

When Wayne's automated message ended, a person comes back onto the line to explain that Obama has appointed "a cabinet full of gun haters." When pressed to name one, the NRA representative pointed to House Speaker Nancy Pelosi, who, of course, is not part of the Obama cabinet. Pressed further for an actual cabinet gun-hater, the NRA rep offers nothing but silence.

I can't believe people take this bunch of lackwits seriously.

Then again, I couldn't believe that people took Bush & the Mayberry Machiavellis seriously, either. We've got an overabundance of stupid in this country. Possibly even more abundant than Seattle's solstice snow.

You know what? I'm going to go back to watching the roads ice up. It's a lot less depressing than watching assclowns on parade. 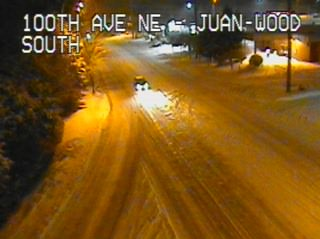