I see we have elected a Con in Dem's clothing:

This is the time of year when I start to get excited about what sort of ideas and personalities newly-elected legislators will soon bring to Congress. One rising freshman, however - Colorado's Jared Polis - is already off to a rocky start. ColoradPols informs us that Polis has written an op-ed in, of all places, the Wall Street Journal, purporting to give advice to his soon-to-be colleagues about the auto industry bailout.

Consider for a moment the optics of this sort of move: Polis, elected to represent a liberal district (D+8), is taking to the pages of the most conservative major paper in America to tell Congress (made up mostly of Democrats) what it ought to be doing before he's even sworn in. Now, you might reasonably ask why that's so bad - after all, isn't Polis allowed to share his ideas?

Of course he is. But I think his approach is more than a little presumptuous. What's more, his "solution," such as it is, could have been dreamed up by John Boehner: cut capital gains taxes! And he doesn't limit himself to cutting taxes to save the auto industry - he thinks they could be the panacea for the entire economy.

What a spectacular dumbass. Not only is he proving to his liberal constituents that he's a one-term mistake that should be rectified come next election, he's a fucking freshman. Not to mention, his snotty little WSJ sermon will probably lead to his being greeted by a legion of sophomores, juniors and seniors, holding bats and saying things like, "We'll show Mr. Clever Dick how things are done round here."

Sen. Evan Bayh will also need to have a few things gently explained, with a hammer if necessary:

In the House, the political calculus on major initiatives is a three-part dynamic: Republicans, Democrats, and a caucus of right-leaning Democrats in the "Blue Dog Coalition." In the 110th Congress, Dems were more often hampered by GOP obstructionism and presidential vetoes, but the presence of nearly 50 "fiscally conservative" Democrats often limited the options of the party's leadership.

"I think we have a wonderful opportunity to break the gridlock that has existed in Washington for too long," Bayh said in an interview. "We need to do that in practical ways that will solve problems. The place that will be most important in striking that right balance will be in the Senate."

[snip] In the House, the Blue Dogs are not only overly cozy with corporate lobbyists, this is a coalition reluctant to embrace a progressive vision on issues like climate change, and committed to a financial plan focused on spending reductions and balanced budgets -- precisely when the federal government needs to be doing the opposite.

In other words, Evan, thanks for the sentiment, but we already have plenty of corporate bitches playing macho moderate. And Bush is on his way out the door, so, you know, the days of Republicon bootlickers are strictly numbered.

I hope Obama's getting a steamroller for Christmas. Looks like he'll be needing one, and he'll need to apply it in a strictly post-partisan fashion.

Still, the Blue Dogs and the wanna-be Cons still aren't a patch on the real thing, which is why it's so nice to see Sen. Chris Dodd give them a thorough spanking:

Senator Christopher Dodd spoke to the press Friday afternoon about last night’s Republican shenanigans and made some very important points:

Indeed, it is absolutely incredible. As Sen. Dodd told NPR on Friday, there was a part of the minority that was “set on having this deal blow up.”

Indeed there was. I wonder what part that would be...

A little more background on the Senate Republicans who sandbagged the auto industry bailout - and why:

The fiercest opposition to the loan proposal -- and nearly a third of the 35 votes against ending debate on the deal -- came from Southern Republicans, and the ringleaders of the opposition all come from states with a major foreign auto presence. Not coincidentally, nearly all of those states -- except Kentucky -- are also "right-to-work" states, which means no union contracts for most of the employees at the foreign plants. The Detroit bailout fell victim to a nasty confluence of home-state economic interests and anti-union sentiment among Republicans.

Unfortunately for them, reality's right on the heels of Chris Dodd, waiting to give them a series of bitchslaps that will leave their heads ringing like a Christmas carillion:

Wishing you the merriest of holidays while you still draw your taxpayer-financed salary, and hoping you've learned to tip well through the holidays.

Because that person serving you at your insular country club or at the swanky restaurant barely hanging on by a thread? It isn't just some poor schmoe from the other side of the tracks that you can just ignore.

It might be a former big-time political crony or donor:

Well-paid professionals like lawyers and architects are joining the rapidly expanding unemployment rolls in New York City, according to a new unemployment study.

The report, scheduled for release by the Fiscal Policy Institute, shows that the effects of the financial crisis have spread well beyond Wall Street to other white-collar jobs, as well as construction, retail and service jobs.

And, unlike poor folks who have no real means of contacting you because you avoid them like the plague -- all those former donors and lobbyist-hiring contractors? They've got your campaign staffers on speed dial.

Not only that, but there's another unionized workforce to contend with:

Okay, the anti-union Southern GOP managed to put the screws to the auto industry this week - but this, on the other hand, is a big win:

After an expensive and emotional 15-year organizing battle, workers at the world’s largest hog-killing plant, the Smithfield Packing slaughterhouse in Tar Heel, N.C., have voted to unionize.

The United Food and Commercial Workers, which had lost unionization elections at the 5,000-worker plant in 1994 and 1997, announced late Thursday that it had finally won. The victory was significant in a region known for hostility toward organized labor.

The vote was one of the biggest private-sector union successes in years, and officials from the United Food and Commercial Workers said it was the largest in that union’s history.

Why do I get the feeling Corker's doing an Exorcist impression just about now? They're so adorable when their little heads start spinning.

And then there's the fact that their strategy has been laid bare nekkid for all the country to see:

It seemed pretty obvious this week that much of the conservative opposition to the automotive-industry rescue package was built on union-busting. MSNBC's "Countdown" got a hold of an internal Republican memo that highlighted this point rather explicitly.

Countdown has obtained a memo entitled "Action Alert - Auto Bailout," and sent Wednesday at 9:12am, to Senate Republicans. The names of the sender(s) and recipient(s) have been redacted in the copy Countdown obtained. The Los Angeles Times reported that it was circulated among Senate Republicans. The brief memo outlines internal political strategy on the bailout, including the view that defeating the bailout represents a "first shot against organized labor." Senate Republicans blocked passage of the bailout late Thursday night, over its insistence on an immediate union pay cut.

Alex Koppelman and Mike Madden had a report in Salon this morning, noting that even the Bush White House didn't try to undermine UAW the way Senate Republicans did. "It was all about the unions," one senior Democratic aide said. "This is political payback for lots of things, and probably even more to come."

Labor officials told Koppelman and Madden that they expect Republicans to keep taking shots at unions whenever they can. "This cynical stance they took last night -- they're willing to jeopardize 3 million jobs so they could gain some advantage in their war against unions -- is appalling," said Bill Samuel, the chief lobbyist for the AFL-CIO.

Indeed, the LA Times noted today that conservative Republicans are intend on striking against "an old enemy: organized labor," and the right hopes to send a message to the country. "If the [United Auto Workers], which is perceived as one of the strongest unions in the country, can be put under control, that may send a message across the whole country," said Michigan State University professor Richard Block, a labor relations expert.

Alas, the only message they're sending across the country is a big "Fuck you" to American workers. Not exactly what people worried about their jobs want to hear right now. As Steve said, "It's a very odd time for GOP lawmakers to invest so much energy in ensuring American workers receive less money. And yet, here we are."

They're attempting to create a great many more poor people. I think maybe they're forgetting the wee fact that the vast majority of poor people vote Dem. 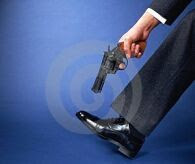 Artist's impression of the current GOP
Posted by Dana Hunter at 6:46 PM