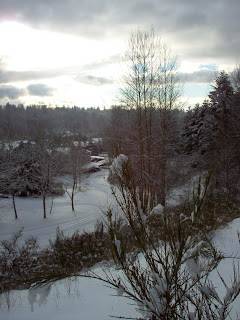 That's mah valley. I got to go play in the snow in it. When I called our hotline this afternoon, they informed me the call center was closed. I actually called three times to make sure I was hearing them right. They hadn't closed the place while the snow was coming down in truckloads, so I was having a hard time believing my ears. Apparently, the roads this morning were really that bad. Yippee! No fighting with myself over whether I should be insanely stupid brave or not.

I'm staring out my window at a clear sky, with a beautiful blush of sunset, and most of the major roads are nearly clear. Our road is going to be a hellacious pain in the arse tomorrow, seeing as how it's still solid-packed snow, but they'll have sanded it, so it should be passable. I dug the car out with a wok this afternoon. I am ready.

Of course, if things melt off too much too soon, the streets around work will probably flood, which might just mean another closure. The important thing is, though, the forecast assures me this will all be over soon. And I got to go play in the snow.

With the weather update out of the way, let's get to kerfluffle updates. Yglesias solves the mystery of how Jennifer Palmieri got her hot little hands on his blog to begin with:

I wish the guest post from Jennifer Palmieri that I put up Sunday evening had been handled differently in a variety of ways since just sticking it on the blog and then going to bed seems to have given people a lot of misleading notions about the site being somehow “hijacked.”

Anticipating the obvious: Epic Fail. For fuck's sake, the man could've spared us all a lot of angst by saying, "Jennifer asked me if I'd mind posting her contrasting viewpoint, and I said sure," right at the beginning of that ridiculous post. After the last eight years, we're quick on the trigger when it comes to suspecting authoritarian influence from on high.

I wonder why that could be?

In an interview with Fox News’s Chris Wallace yesterday morning, Vice President Cheney defended the Bush administration’s warrantless wiretapping program, and claimed that the congressional leaders briefed on the program wholeheartedly approved. In fact, Cheney claimed, when the White House asked if it needed congressional approval for the program, they unanimously agreed it did not:

Cheney claims to have suggested seeking congressional approval right away. However, the White House put up a stiff fight just a few years later, when Congress finally sought to impose oversight of the wiretapping program. The Vice President has already presented misleading infomration about the dates and frequency of these supposed briefings; now he appears to be offering misleading descriptions of them.

Yeah. Darth Cheney and Bush's Buttkissers running around trying to redefine the truth and change history would probably be a big part of the reason.

Then there's our vaunted liberal media:

Deborah Howell, the ombudsman of the Washington Post, is writing an endless series of valedictory columns to mark her departure after three contentious years on the job. What's her takeaway? Amazingly, exactly what she thought she knew coming in: the news coverage in the Washington Post just isn't slanted enough towards conservatives

[the WaPo should] Make a serious effort to cover political and social conservatives and their issues; the paper tends to shy away from those stories, leaving conservatives feeling excluded and alienated from the paper. I'd like those who have canceled their subscriptions to be readers again. Too many Post staff members think alike; more diversity of opinion should be welcomed.


I don't recall the Post having much, if anything, negative to say about George Bush or his war until after he was safely reinstalled in the White House. Even buried a few stories for him. She has evidence, though, she says. She found 26 more negative stories on the OpEd page about McCain up to election day.

What she understandably does not mention is who wrote them. By my count, just from the front page of their columnist archives (which in some cases only goes back as far as mid-September) before Nov. 3 there were 22 unkind reflections on Senator McCain from centrist and conservative Post opinion writers Anne Applebaum, David Broder, Bush presidential speechwriter Michael Gerson, George Will (who declines with some heat the suggestion that McCain, and for that matter, Bush represent conservatism at all), that nice apolitical Mr. Hiatt, Sebastian Mallaby, Robert Novak and, of course, (there have been many more since) conservative Post-syndicated columnist Kathleen Parker.

Diversity, in Ms. Howell's world, apparently means writing nothing but nice things about Cons, even when your conservative editorial staff is pissed off at Cons.

We also get to put up with an outrageous amount of baseless spin. Nearly everyone in the MSM, it seems, has a bucket of tar, a brush, and the irresistable desire to apply it to anyone who so much as looks liberal:

Last week, the Wall Street Journal's Jonathan Weisman suggested Barack Obama and his transition team should ignore Patrick Fitzgerald and federal prosecutors, and release a list of contacts with Rod Blagojevich's office immediately. As Weisman put it, Obama could have "easily" ignored the wishes of law enforcement officials in the middle of an investigation, and "reassured" the public last week, instead of this week. For support, Weisman quoted Karl Rove's lawyer.

In the latest effort to connect Obama to the Blagojevich controversy, the WSJ's Weisman tries a new trick today.

[Obama] promised to account for any and all contacts between his staff and the governor's, setting a release within days. Finally, he said the account was complete, but he wouldn't release it until Christmas week.

The slow dribble "hurt him slightly," because it made him look like an ordinary politician in scandal mode, not the antipolitician people believed they voted for, said Ron Bonjean, a Republican consultant who dealt with scandals affecting then-Senate Majority Leader Trent Lott and then-House Speaker Dennis Hastert.

Weisman added, "Regardless of how clean the Obama camp is, the release of the report isn't likely to be clean." I don't kow what this means. Even if the report shows no wrongdoing whatsoever, it will be scandal fodder anyway?

Yup. In fact, if God hisownself came down from on high and declared Obama to be pure as the driven snow, the Cons and their loyal propagandists (who for some unfathomable reason wish to be known as journalists) would say, "B-bu-but he's an evil librul!" and continue regardless. The only thing they're liberal about is their smears.

For fuck's sake, they can't even read plain polling data:

In an interview with the New York Times, Sen. Lamar Alexander (R-TN) gave the sort of language we should expect to hear from Republicans over the next four to eight years, denying that Barack Obama has a mandate for genuine policy changes.

"The change that people voted for was a change in management," said Alexander. "If they think the change the country elected them to provide was a lurch to the left, they're in for a big surprise."

The thing is...this just isn't true. There is a mountain of poll data showing that people favor Barack Obama on policy...

And we're in for a lot more of this sort of bullshit. These fuckwits wouldn't know reality if it bit them in the balls.

At least it will allow us to continue honing the art of snark:

John Tierney, a libertarian columnist whose work graces the New York Times science pages, slammed President-elect Barack Obama’s selection of John Holdren as chief science adviser this weekend. Tierney attacks Holdren for being “spectacularly wrong about a major issue in [his] field of expertise,” for having “resistance to dissenting views,” and for “his tendency to conflate the science of climate change with prescriptions to cut greenhouse emissions.” Tierney quotes at length from the Competitive Enterprise Institute and the Reason Foundation, both right-wing libertarian think tanks.

Tierney insists there are "other ways to cope" with global warming. After a masterful takedown, Think Progress's Brad Johnson continues his brilliant run of snark by enumerating Tierney's "other ways:"

Read the whole piece. It's glorious. And Jennifer Palmieri hasn't yet butted in to tell us that it in no way reflects the views of CAP, which is even nicer.

If you need one last good laugh at a stupid pol today, I suggest you trot over to the Washington Monthly, where Steve Benen points out once more with feeling that Sarah Palin is a clueless git.

That winding road in the center of the photo is on a grade, isn't it? Must be ugly driving in and out of there right now. Glad you got the day off.

I love the part about "magic technology to suck up emissions". That already exists; it's called "trees". We're busy cutting them down in the rainforests to grow sugar cane.