The history of science, you may have noticed, is dominated by men. When we're pulling names of famous scientists from the tops of our heads, the vast majority are male: Galileo, Newton, Darwin, Einstein. If women come up at all, it's a paltry few: Madame Curie, of course. Perhaps Vera Rubin, Dian Fossey, Mary Leakey or Rosalind Franklin, if you know your science well. But you'd be forgiven for thinking that women were vanishing rare in science before the mid-to-late 20th Century.

But delve deeper, and you find women there from the very beginning. Their work went unnoticed, unappreciated, or usurped by a male-dominated world, yet they worked on, performing experiments, making discoveries, fleshing out theories. You never realize how much women have contributed to science until you look.

While I was reading E = mc²: A Biography of the World's Most Famous Equation, I stumbled across three extraordinary women who contributed to Einstein's revolutionary physics. They prove beyond a reasonable doubt that science isn't just for the men.

History knows her as Voltaire's mistress, conveniently forgetting that she more than any other person was responsible for bringing the gospel of Newton to passionately Cartesian France.

Born in 1706, she lived in a time when women were expected to become nothing much more than wives, mothers and mistresses. Education for women was limited, but her father, seeing her intelligence, had her privately tutored. He also gave her fencing lessons to help her develop graceful movement - lessons which she later put to good use fending off annoying suitors. Not many men were willing to pursue an unwanted relationship with a woman who could best them with the foil.

She married the Marquis Florent-Claude du Chastellet, whom she knew would be away on military campaigns much of the time and thus leave her to her own devices, which consisted of a series of liasons that not only fed her need for male companionship, but furthered her scientific education. One lover, the Duc de Richelieu, encouraged her to learn higher mathematics. She became fascinated by Newton in her 20s, and spent the rest of her life bringing his elegant theories of gravity to France.

She met and fell in love with Voltaire after he returned from exile in England. They set about turning her husband's disused country chateau into their own laboratory, stocking it with over 21,000 books - far more than some universities contained. She tested Newton's theories in the great hall, swinging wooden balls from the rafters. Together, in 1738, she and Voltaire wrote Elements of Newton's Philosophy, although "together" may be the wrong word. Voltaire said of their collaboration, "She dictated and I wrote." His name appears as the sole author, but the book was illustrated with an image of Emilie shining Newton's knowledge on Voltaire's hand. The book brought Newton to France, explaining his discoveries in light, optics, and astronomy for a wide audience. It was the beginning of the end for Descartes as France's premier scientific theorist.

Emilie wrote her own book, The Foundations of Physics, which combined the theories of Descartes, Leibniz, and Newton into an elegant whole. The book, published anonymously, resolved previously intractable problems in describing force and movement.

Her most prestigious work was undertaken at the end of her life. She translated Newton's Principia into French from the original Latin. Her translation, which is not merely a rendition of Newton's text but also translated Newton's geometry into the new algebra then current on the Continent, converted the complex mathematics into prose, and summarized recent research and experimental confirmations of Newton's work. Her translation is still the standard translation of Principia into French.

As she was writing the book, she discovered she was pregnant - a virtual death sentence for a forty-two year-old woman in that age. She pushed herself to work eighteen-hour days, and finished the book on September 1st, 1749. Three days later, she went into labor; less than a week later, she died from either infection or embolism, leaving Voltaire distraught.

Aside from her books, her most astounding contribution to physics was the realization that Newton was wrong. She discovered the experimental results of William s'Gravesande, who had discovered by dropping brass balls into a clay floor that something moving twice as fast will bury itself twice as deep - energy doesn't merely equal mass times velocity, but mass times velocity squared. With those results in hand, she was able to prove that Leibniz had been right: E ∝ mv². Scientists now started thinking in squares.

I think you know where that led.

Wikipedia entry
Physicsworld: "The Genius Without a Beard" 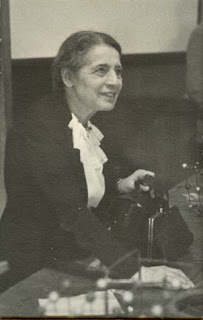 Born in 1878, Lise Meitner cracked a lot of glass ceilings and should have won a Nobel Prize. She discovered nuclear fission, which earned her the unwanted title of "Mother of the Atomic Bomb."

She studied physics at the University of Berlin. At that time, women in science, especially the hard sciences, was nearly unheard of - she had to get permission to attend classes. Max Planck didn't believe it was right or natural for women to do more than become housewives and mothers, but he let Lise in - and she did so well she ended up becoming his research assistant.

After university, she and her research partner Otto Hahn moved to the new radiation research unit at the Kaiser-Willhelm Institute. Lise came as his "unpaid guest" - women could not be official employees of the Institute. She did the lion's share of the work, while Hahn's name ended up as senior author on all of their papers, and she ended up with only a copy of the award their work won.

Her fortunes changed after WWI, when she became Germany's first woman professor. She became a full professor of physics at the University of Berlin, where she continued her studies of radiation, atomic theory, and quantum mechanics. But her Jewish heritage caught up with her: she was forced to flee Berlin, leaving Hahn and all of her work behind. She ended up in Stockholm, Sweden, where she discovered that mass is lost when a nucleus splits, released as energy. Einstein's E = mc² told her how much energy would be released: using his theory, she was able to predict that a chain reaction could result. She wrote to Hahn to share her theory: he did the experiments and published the results - without mentioning her name. Later, he convinced himself that his work alone had resulted in the discover of nuclear fission, for which he won the Nobel Prize.

Franklin Roosevelt invited Lise to work at Los Alamos, where the first atomic bomb was being developed. Lise refused. She would have no hand in using her discovery to kill.

Later in life, she finally received the honors she deserved. Appropriately enough, she received the Max Planck Medal. She also won the Enrico Fermi Award and was elected to the Swedish Academy of Science. Only two other women had ever earned a position at the Academy before her. Long after her death, the 109th element, meitnerium, was named for her.

The inscription on her headstone was written by her nephew, Otto Frisch. It sums her up perfectly: "Lise Meitner: a physicist who never lost her humanity."

Born in 1900, Cecilia ended up coming to America from England for the freedom to be a woman and a scientist.

She completed her early education at Cambridge, but earned no degree - degrees weren't awarded to women at that time. Fortunately, she met Harlow Shapley, director of the Harvard College Observatory, and realized that Harvard was far more open to women. She crossed the pond and, with Shapley's encouragement, wrote her doctoral dissertation on "Stellar Atmospheres, A Contribution to the Observational Study of High Temperature in the Reversing Layers of Stars." It marked a huge turning point for women in science: before then, women didn't do PhD's, but more than that, her dissertation was very nearly a bombshell:

Astronomer Otto Struve characterized it as "undoubtedly the most brilliant Ph.D. thesis ever written in astronomy". By applying the ionization theory developed by Indian physicist Megh Nad Saha she was able to accurately relate the spectral classes of stars to their actual temperatures. She showed that the great variation in stellar absorption lines was due to differing amounts of ionization that occurred at different temperatures, and not due to the different abundances of elements. She correctly suggested that silicon, carbon, and other common metals seen in the sun were found in about the same relative amounts as on earth but the helium and particularly hydrogen were vastly more abundant (by about a factor of one million in the case of hydrogen). The thesis thus established that hydrogen was the overwhelming constituent of the stars. When her thesis was reviewed, she was dissuaded by Henry Norris Russell from concluding that the composition of the sun is different from the earth, which was the accepted wisdom at the time. However Russell changed his mind four years later when other evidence emerged.

Until Cecilia's work, no one had considered that the sun might be mostly hydrogen and helium. The realization to the contrary revolutionized the way we think of stars - after folks started accepting the evidence.

She spent the rest of her life studying stars and teaching astronomy students. Her work on high-luminosity stars, along with the surveys she and her husband did on stars brighter than the tenth magnitude - a staggering 3,250,000 or so observations - helped astrophysicists understand stellar evolution.

Many women have now followed the trails these extraordinary females blazed. Science is indebted to their discoveries. It's never been just a man's world, as these three women and countless others prove. Science wouldn't be the same without them. That being so, it's time to start singing their praises.

I have always had a cross-the-centuries crush on Emilie du Chatelet. But even if I invented a time machine, I know my attraction would be unrequited, for history does not record me among her lovers.

I think you may have a typo. Willem 's Gravesande found that doubling the velocity resulted in four times the depth in the clay, tripling it gave nine times the depth, etc.

I hadn't heard of Cecilia Payne-Gaposchkin, but I was aware of the results of her work. One of the most amazing things about astronomy is how much we can understand about distant stars thanks to her fusion of ion theory and the light emissions of stars. You'd think I'd have run into her name before, but back then I suspect most female scientists labored in obscurity.