I'm trying very hard right now to think good things about winter. Considering my road and parking lot are buried under nearly six inches of icy slush that's nigh-impossible to navigate, this is difficult. But there are redeeming qualities to winter. I even have a few favorite things about snow.

For one thing, it makes shriveled berries look rather artistic and lovely: 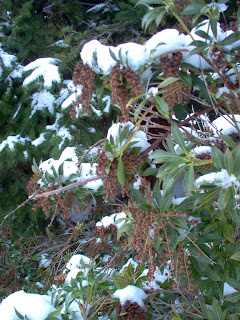 Everything looks prettier with a coat of new snow. And it's a lot of fun to go tramping through. Long rambles going nowhere in particular, watching rays of sunlight set the snow aglow, is tremendous fun. I like watching how the light varies: now bright and sparkling, then muted and soft-focus. Then there's the running: when you come across a long flat stretch, it's almost impossible not to indulge in a good gallop, just for the sheer wacky fun of it.

So yes, snow can be fun. And what better tribute to it than Loreena McKennitt's song "Snow"? I found this video montage of figure skater Kristi Yamaguchi set to it, and thus combined two of my great loves: beautiful music and art on ice.


I used to be an enormous figure skating fan. One of my best memories is the Alberville Olympics. My friend JT and I spent weeks watching the figure skating competitions together. You have not experienced a truly surreal figure skating viewing experience until you've sat there getting all ooey and aahy with a 6'4, heavy-metal listening, cowboy boot wearing, red-blooded male. After several weeks of exposure, we both decided that we absolutely had to drive to Flagstaff and indulge in some skating ourselves. So no shit, there we were, filled with visions of triple axels, inching our way across the ice like ancient grannies. The reality definitely did not match the fantasy. And then there was the speed-skater-in-training who snookered us into holding hands with her. We didn't expect her to take off like a rocket and drag us along.

We discovered we were not speed skaters, but we were certainly speed fallers.

That was the year I fell utterly in love with Sergei Ponomarenko and Marina Klimova. They are the epitome of art on ice. They aren't just phenomenal ice dancers, they are superb storytellers. Not to mention Marina is a drop-dead gorgeous redhead, which adds a whole new dimension of beauty.

Here they are doing Dracula:

Even if you don't like figure skating, you have to admit that was something outstanding.

Here's another something outstanding. If you want to see courage defined as endurance for one moment more, go watch Elvis Stojko win the Olympic silver in 1998. Most viewers had no clue he was suffering from a groin pull until he nearly collapsed after finishing his long program. It's a moment I'll never forget.

So those are a few of my favorite winter wonders. Turns out it's not such a bad season after all...
Posted by Dana Hunter at 5:31 AM