At least one of us is enjoying the snow: 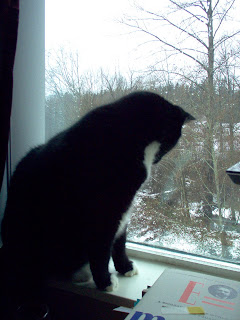 You can't see it in this pic, but Misha's watching snowflakes falling while her mommy gnashes her teeth. Our parking lot looks a lot like the Arctic Sea. It's full of water, chunks of ice, and huge ruts of churned snow. I was tempted to venture out today until I walked down to check the road and saw a pickup truck nearly wreck on its way through. It heaved like a mechanical bull and then wedged itself to a stop in the deeper snow along the side. This is why I'm home cruising the intertoobz rather than out having dinner with a friend.

Welcome to the paradox of global warming. As the seas warm, more moisture gets sucked up into the atmosphere, skedaddles south, and dumps itself all over normally snow-free parts of the country. And guess what? Things are only likely to get much, much worse very quickly indeed:

According to a new report led by the U.S. Geological Survey, the U.S. “faces the possibility of much more rapid climate change by the end of the century than previous studies have suggested.” The report, commissioned by the U.S. Climate Change Science Program, found that global sea levels could rise higher than a 2007 U.N. Intergovernment Panel on Climate Change (IPCC) study had concluded:

In one of the report’s most worrisome findings, the agency estimates that in light of recent ice sheet melting, global sea levels could rise as much as 4 feet by 2100. The intergovernment panel had projected a rise of no more than 1.5 feet by that time, but satellite data over the last two years show the world’s major ice sheets are melting much more rapidly than previously thought. The Antarctic and Greenland ice sheets are losing an average of 48 cubic miles of ice a year, equivalent to twice the amount of ice in the Alps.

Thank you, George W. Bush, for eight years of inaction. It sure is nice that pollution, environmental degradation, and foreign wars over dwindling oil supplies could rage unchecked so that your buddies in the oil and coal industries could get rich.

Apparently, they weren't reinvesting that money in containment walls:

By now anybody paying attention is aware of the massive spill of coal-ash sludge that took place in Roane County, Tennessee earlier this week, dumping a reported 1.7 million cubic yards of toxic sludge into the Emory River, a spill many cited as larger than the Exxon Valdez oil spill in Alaska.

Except that it wasn't 1.7 million cubic yards [link moved]:

As with everything that happens under Bush's watch, the initial reports drastically underestimated the scope of the disaster. What a fucking shock.

Here's a description of the disaster's aftermath from United Mountain Defense. Please contain your surprise upon discovering that the Tennessee Valley Authority has done bugger-all to prevent or respond to said disaster:

TVA says the area is not toxic but you can see coal sludge in the water and dead fish on the banks. The members of this community are without clean water and many without electricity or gas heat. We met people who were given motel rooms by TVA and others on the same street that have been without heat for days in 27° weather and others who have been vomiting for more than 12 hours after drinking the water.
We visited approximately 40 households and many people were frustrated they had not received any information other than what they could figure out from the minute long television segments or an isolated phone call from the water or gas utility. Residents say that they are not surprised by the flood because TVA has been fixing leaks in the retention wall for years and one person said this wall had been leaking for months before it broke.

And, for good measure, an email from one of the United Mountain Defense folks that puts paid to the idea that the response to this disaster has been anything like advertised:

And yes, if you're wondering, the TVA is a federal agency, not state. Bush's traditions of lying, obfuscating, and denying disasters flourish from top to bottom. This is what happens when we let Cons play at governing for eight years.

And what are the Cons doing while Tennessee chokes? Proving they have a tin-ear when it comes to racist overtones:

Last month, we learned that Katon Dawson, a leading candidate for the chairmanship of the RNC, has been a longtime member of a whites-only country club in South Carolina. This month, Chip Saltsman, the former campaign manager for Mike Huckabee, embarrassed himself in a far more obvious way.

The CD, called "We Hate the USA," lampoons liberals with such songs as "John Edwards' Poverty Tour," "Wright place, wrong pastor," "Love Client #9," "Ivory and Ebony" and "The Star Spanglish banner." Several of the track titles, including "Barack the Magic Negro," are written in bold font.

Saltsman defended his gift to RNC members, noting that he's a longtime friend of Shanklin and his songs for Limbaugh's program are meant to be "light-hearted political parodies."

Ta-Nehisi Coates added, "There's also a tune called 'The Star Spanglish Banner.' Get it? Negroes!! Spanglish!! No?? Clearly your too PC. Seriously, where do people get this idea that the GOP is racist? It really is one of the great mysteries of our time..."

Sometimes, just sometimes, I wish the Smack-o-Matic wasn't virtual, that I had a license to employ it as frequently as needed, and that it had the power to knock some sense into these raving fucktards. Of course, I'd have to ramp up on the protein and start working out five hours a day in order to develop the upper-body strength that would be needed. Even though the Smack-o-Matic is semi-automated, the sheer volume of rampant stupidity is too much for my muscles to keep pace with.

But what about those Cons who luurves Obama? Aren't they the voice of reason that could lead the Republicon party to harmony? No. Digby reminds us what song they're really singing:

It seems that everywhere I turn professional Republicans are falling all over themselves about how much the love our president elect. While I don't doubt that many GOP members of the public are enthusiastic, let's just say I'm a little bit skeptical that all these beltway insiders are being altogether sincere in their praise.

Newtie started the trend with his little scold to the RNC about the Blogjevich controversy, which I explained here. It's a ploy, don't believe it. When you see snakes like Alex Castellanos saying this, watch your back...

He's the guy who said that calling Hillary Clinton a bitch was just a descriptive term. If anyone thinks this guy (or Pat Robertson) has been converted, think again. They are doing this for political purposes. They want to make sure that he owns the next couple of years, which are likely to be very tough. They will obstruct, of course, but all this happy talk is a pretense designed to appease the masses who are hoping against hope that Obama can turn this ship around.

Watch for the knife in the back. The smarter Cons are singing Kumbaya right now because of numbers like these and these, while humming under their breath "Just you wait." When Obama doesn't right the ship instantly upon taking office, you can bet they'll start clucking over how disappointing it all is and how much the stimulus is costing and how much better things would be if only the Cons were in charge. And quite a few people in America will be stupid enough to chime in.

The groundwork is busily being laid. Fortunately, most of it looks about as stable as the sludge in Tennessee:

The last time Democrats won the White House, Senate, and House, it was 1992, and their majority status was short-lived -- 1994 didn't go well for the party. The National Review's Peter Kirsanow believes there's a similar opportunity awaiting the Republican Party in two years from now.

If Republicans can't come back in 2010 they should be sued for political malpractice.

Anything's possible, I suppose, but this doesn't strike me as much of a gameplan. Indeed, if these are the variables that are supposed to lead to a GOP "comeback," it's no wonder Republicans are depressed.

It's not that I don't think they'll eventually be able to con the public - they always do. It's just that I think they're going to have to find better arguments than this to win over more than the 23% who say they'll miss Bush.

Hopefully by the time they come up with something, Americans will be too addicted to responsive government, affordable healthcare, clean air and water, green technology, and the absence of toxic sludge in their yards to pay much attention.
Posted by Dana Hunter at 5:16 PM

If they thought there was only 2.6 million cubic yards of sludge in that pond, I wonder if that means that's what its capacity was. Seems to me that having a pond that's supposed to protect people from toxic sludge is filled to double its capacity could be a legal problem somewhere down the line. Of course, the TVA spokesperson could have just been given bad information, but they left this story uncorrected for days.