I Beat Up Rick Warren Because He Begs Me To

Are you ready for your (near) daily dose of Fundie Christian Hypocrisy Exposed? Stirling Newberry's got us covered. Here ye go:

Many people praise his social engagement, in for example, AIDs intervention. The people who I know in NGOs are considerably less impressed. It turns out that Warren's social gospel is a great deal like his theological gospel: a fraud, used to beat down opposition by declarations of love and submission, and then a demand for money to be used for the multiplication of his, rather than His, servants. Let me take two examples from his PEACE project.

The arguement of PEPFAR, Bush's AIDs plan, is that churches, already being present and having authority, can be used for service delivery. However, the "P" in "PEACE" stands for... "plant churches." If Churches are already present, then there is no need to plant them, now is there? If they are not already present, it means that funding for PEACE is really government funding for missionary conversion work. In fact, the second letter is to create missionaries. One has to get to "A" before doing anything for actual people. Warren pays himself first.

Let's take two examples: one is the PEACE, "Hispanics for Christ" project. It's sole objective? Create churches among American Hispanics and convert them. That's the whole project. One can say many things about the American hispanic population, but an absence of Christianity isn't any of them. As a group Hispanics attend church more than whites. Saturation planting of churches is its aim, with no other objective. PEACE means sectarian conflict first. There is one for Mexico too. Note that the "ACE" is dispensed with, and only the "PE" is funded. Help the poor? First get their donations and devotion. Rick Warren Pays himself first.

The whole piece is a devastating salvo. I suggest you make up a nice tub of popcorn before you go enjoy the whole thing.

And you know what? I didn't believe Rick Warren's PEACE propaganda was that bad. I didn't believe that the stupid homophobic fuckwit could possibly be so stupid as to put something like "plant churches" right in the P for PEACE. And hadn't I read somewhere that it stood for "Promote Reconciliation"? Why, indeed I had. But check this out: 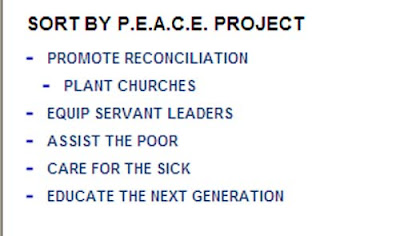 Interesting how he has "plant churches" right under the "promote reconciliation," innit?

And you and I are paying for this bullshit, as Digby points out:

The difference, of course, is that a large amount of the funding for the Warren project comes from taxpayers who don't know that they are paying to convert the third world to evangelical Christianity as part of the plan. Not that they have a choice in the matter. Their tax dollars a spent on this religious project whether they like it or not.

Well, I like it not. And I don't like the fact that this lying, self-aggrandizing, homophobic, homicidal, hypocritical douchebag is going to be giving the invocation at Obama's inauguration. But at least we can take the opportunity to drag his rat bastard ass down. He won't be able to hide his fundie self under moderate's clothing for much longer.
Posted by Dana Hunter at 4:40 AM

Dana . . . another brilliant post! No one does snarky better!

You're a hard person to reach these days. I sent you an e-mail about a week ago . . . let me know what you've been up to lately!