Day Two: Wake up hideously early, realize intrepid companion isn't going to be awake for hours.  No intertoobz due to wi-fi on the fritz in machine.  What else to do but head out for Hurricane Ridge Road to snap photos of all those lovely road cuts we didn't get a chance to linger at the day before?

Port Angeles didn't look promising.  Total gray from horizon to horizon and freezing fucking cold.  But the nice thing about mountains is that sometimes you can rise above all that, and you get to stand in the nice warm sunshine with an ocean o' fog at your feet: 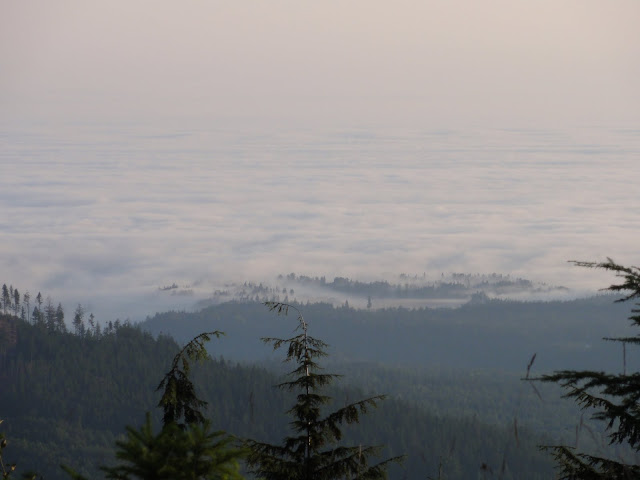 More below the fold, of course.


You already know the story of how I chanced into a lovely maternal scene.  This is for those who can't get enough bebbes: 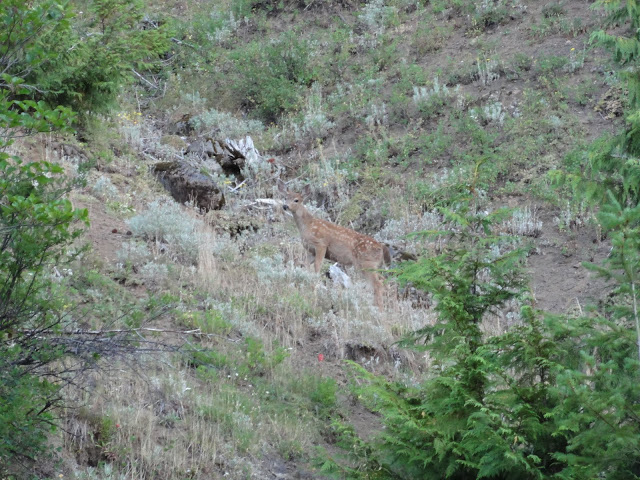 Not all of the wildlife is so gentle and lovable: 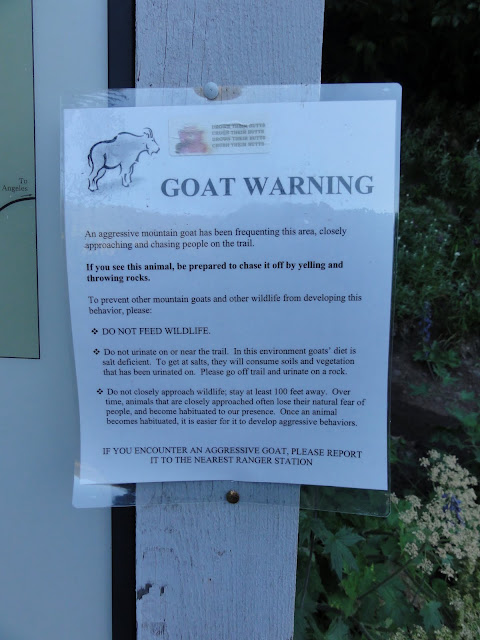 I did not see a single goat, aggressive or otherwise.  But I did see a rather charming waterfall: 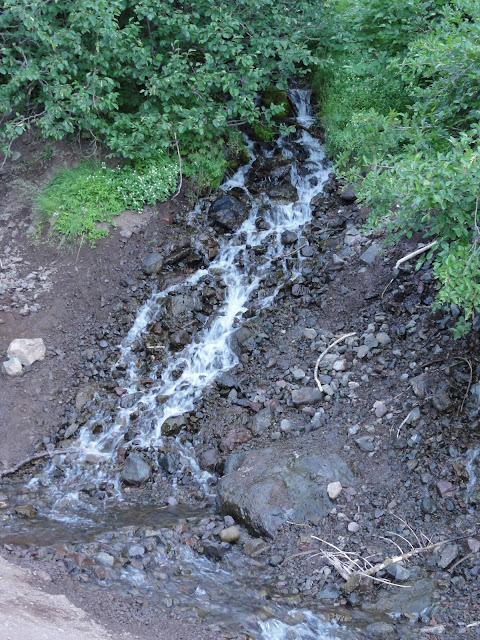 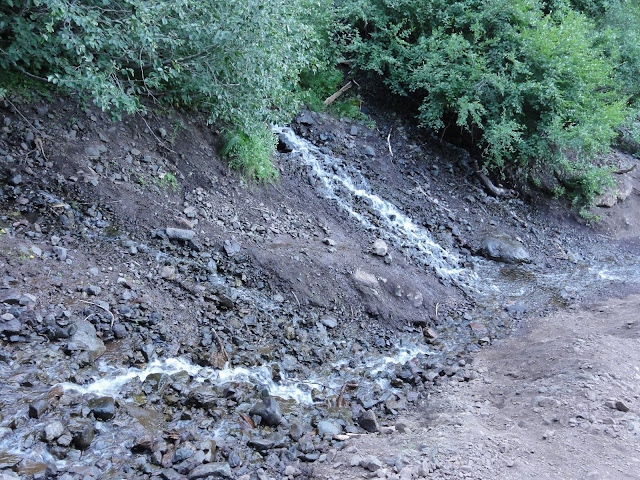 After two warm and wonderful hours photographing geology and wildlife in the sunshine, it was back to Port Angeles, where the freezing fog hadn't quite lifted: 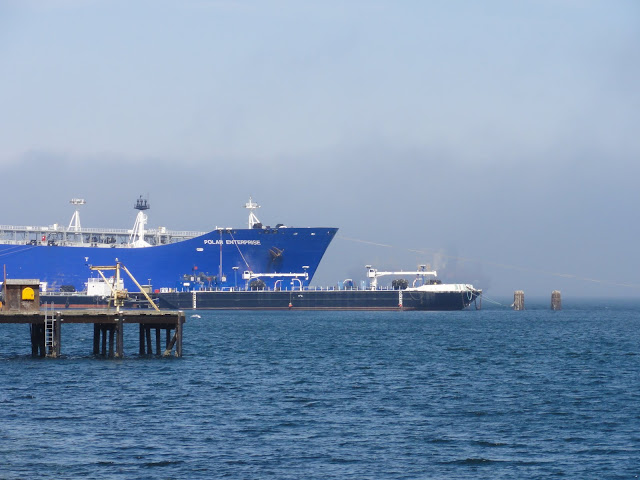 Don't be deceived by the bright blue water.  Yes, the sun's shining, but there's a fog bank behind the ships, and the sea breeze can only be described as "freezing fucking cold."

Luckily, it was back to the mountains for us.  We headed up the Elwha River Valley, which is going to be a rather different place after this year.  They're taking out the dams, so of course we had to go see 'em before they're gone.  Feast your eyes upon this peaceful little lake, because it won't be there for long: 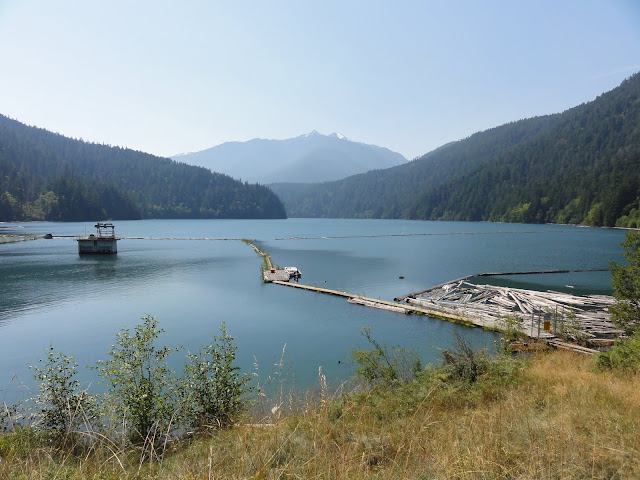 That is Lake Mills, and here we have Glines Canyon Dam: 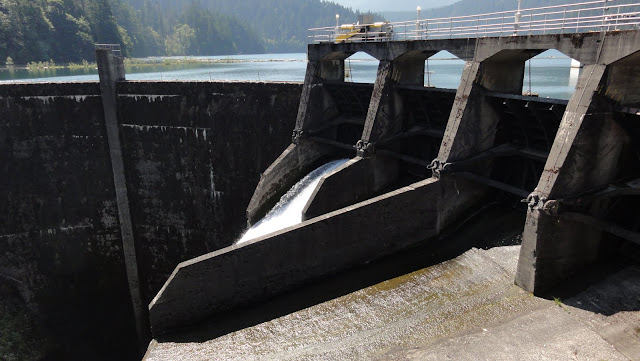 There's a dirty great chain link fence all round it, so it's hard to get good shots.  But you can see water spilling over the penstock - they'll drain the lake by 80 feet, and then start removing the dam bit by bit, starting with the top bits you see here: 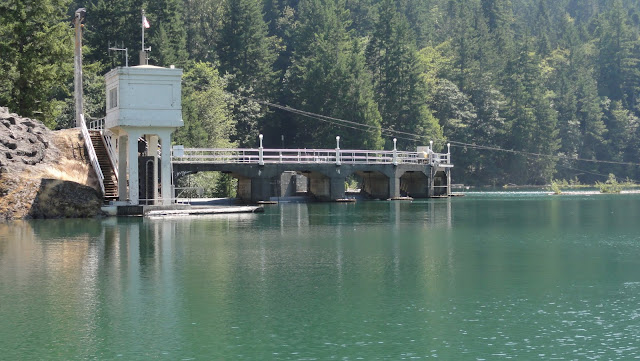 ... and then removing further bits in stages until they can safely blow the remaining stump to smithereens.

Now, you may be saying, "But Dana, there's two dams on the Elwha River!"  And so there are.  But we didn't read the map properly, and so never found the other one, which is on the other side of Hwy. 101. Of course, we can probably get up there to see it next year, before it's obliterated.  Even if not, well, we saw this one.

I'm rather looking forward to going back up after the lake's drained, because I've got a hankering to study the sediments left behind.  Hopefully, they'll allow visitors during this process.

While we were up by the lake, we saw lots of white butterflies all fluttering around, and whilst my intrepid companion amused himself with the dam, I spent my time trying to photograph the little buggers with their wings open.  Unfortunately, they landed too briefly and had a horrible habit of folding their wings up in those instants where they were holding still.  Then I found an easy target - one had fallen on its back in a puddle.  So I rescued him: 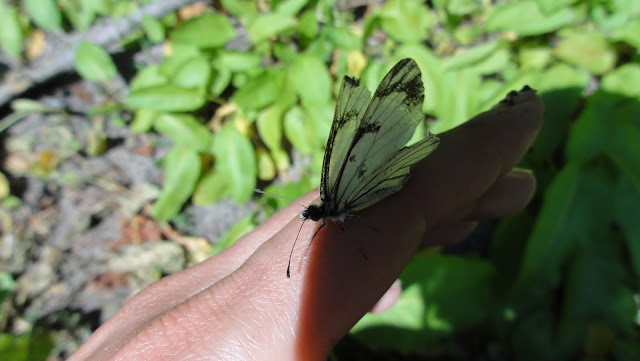 He spent some time drying out on my fingers before fluttering away.  His wings were a bit chewed up and missing quite a lot of scales, but at least he didn't die an ignominious death in a mud puddle.

A little bit later, I found another butterfly just hanging about in the bushes.  I lurked around him for a bit, waiting for the instant when he'd fly away and I could capture him on the wing.  He refused to cooperate.  So I waved my hand near him by way of encouragement.  He wasn't encouraged.  So I decided to see how close he'd let me get: 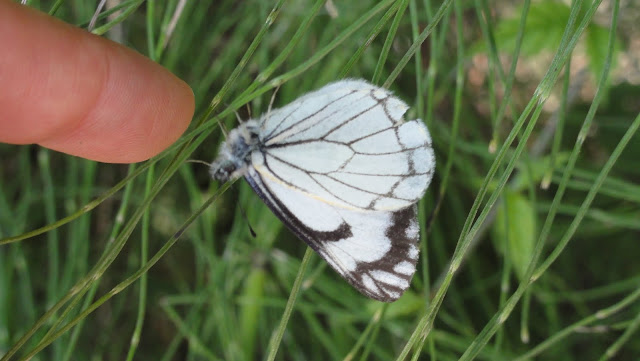 He wasn't impressed.  Apparently, I represented a threat level of -10.  He just lingered there long enough for my hand to get tired, and just when I wasn't prepared to press the shutter, the little bugger took off.  I never did get an action shot.  But it'll do.

Once we'd been defeated by butterflies, we were on to Lake Crescent, which turned out to be one of the most delightful stops of the trips.  Warm sunshine, cold blue water, and a windsurfer close enough to touch: 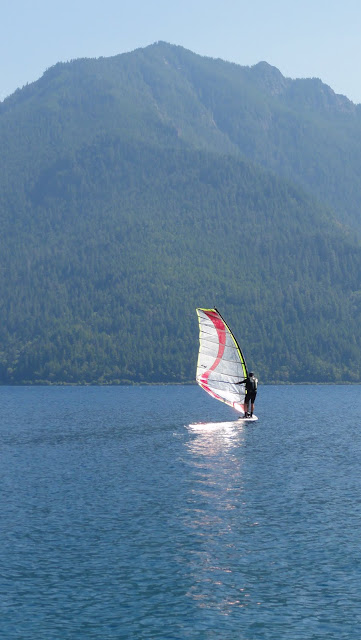 The lake's large enough for sailboats, too.  Cujo's got the shot I took of ye itty bitty boat against the great big mountains.  Here's one of it as it came closer, and I zoomed in a bit for a good view: 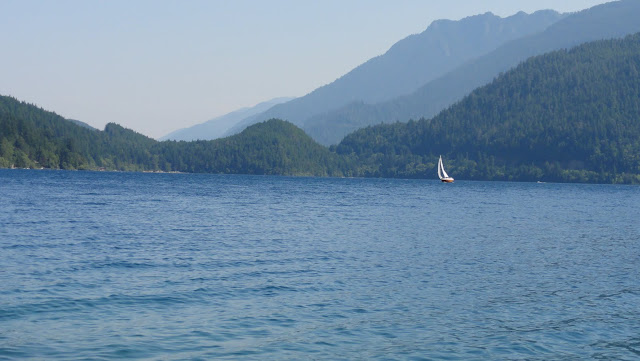 After lingering a while at the Log Cabin Resort, we made our way back up the road, stopping where the trees thinned enough for magnificent views.  Here's one that shows the fjord-like qualities of Lake Crescent: 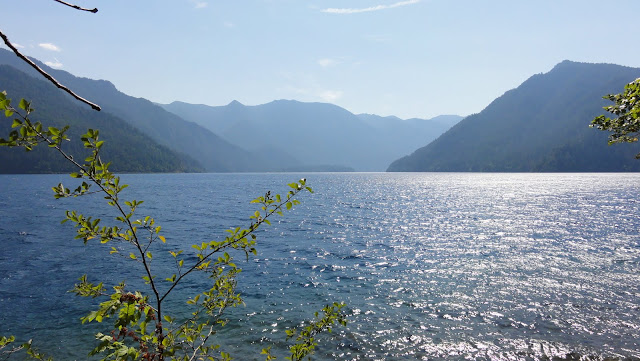 I could spend the rest of my life there, and wish for a few lifetimes more.  I mean, look at the color of this water: 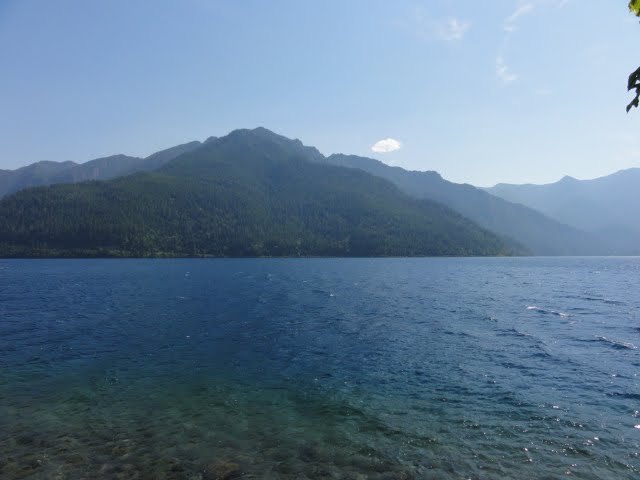 See that wonderful emerald green there in the shallows, shading into sapphire?  I love it.  This is a perfect gem of a lake, and I'm glad it's protected by Olympic National Park.

Uno mas.  We stopped at a beach along Hwy. 101, and got a view of the back side o' the mountains: 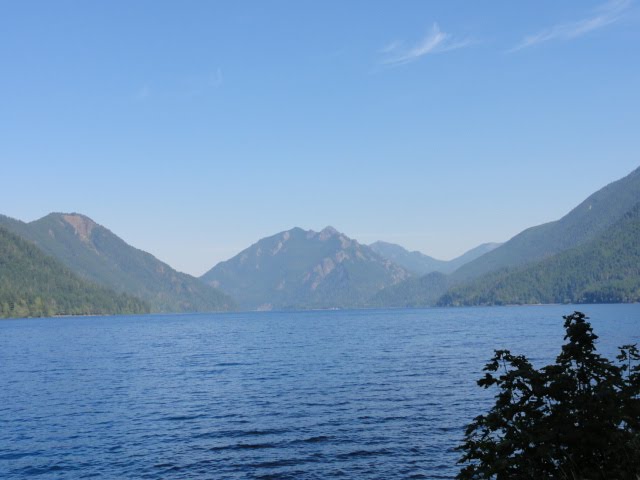 Go through that fjord-like gap, there, and you'll be in that peaceful arm of the lake we'd just visited.

Further on, we found yet another pullout, which we stopped at because it had informational signs.  We spent quite a bit of time here, too, since the beach was littered with the most perfect skipping stones I've ever seen, and some very interesting rocks I haven't yet identified, all down by this highway bridge: 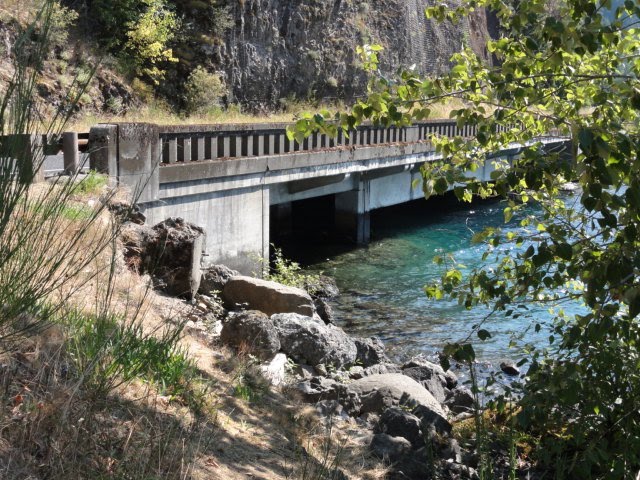 Again, note the brilliant color of the water.  I'd show you the rocks, but my photograph of one of the boulders is meh.  It couldn't capture the extraordinary greens and reds, and the chalky streaks.  I've got samples here at home, so I'll get them figured out eventually, and tell you all about them in a future post.

After Lake Crescent, we headed down through Forks (which is pouncing way too hard on the fact bits of the Twilight movies were filmed around there) on our way to the beach.  We'd meant to hit Ruby Beach this trip, but partway down the road to it, we saw ominous clouds and unmistakable signs of rain.  Well, if the weather was going to be that way, we weren't going to go well out of our way.  Ruby Beach is right on the highway, on our way home, and so we stopped there.  It wasn't any less cold and cloudy, complete with a light misty rain, but that was okay.  The incoming tide made enough of a splash to make up for it: 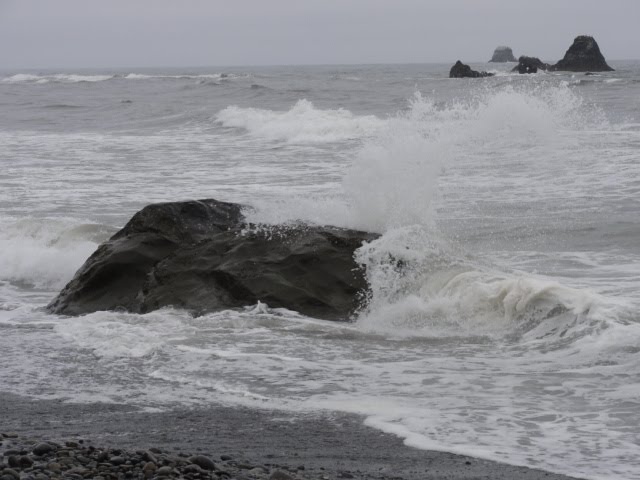 I can't decide which to use, so you're getting both of mah favorites: 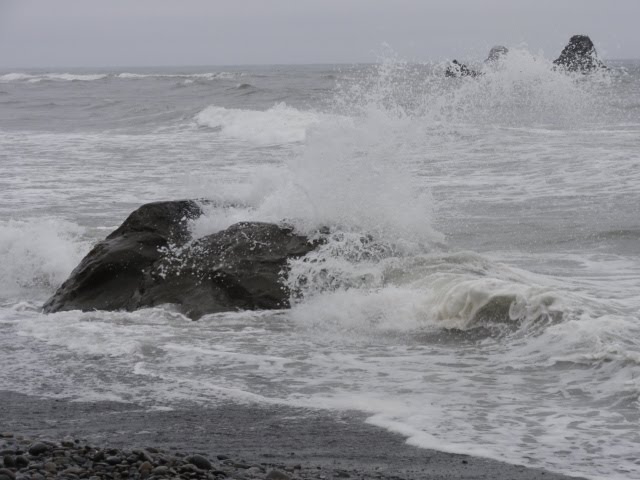 You know, I could spend a lifetime here, too, and never get bored.  There's all sorts of interesting things on a beach, like enormous clusters of shellfish: 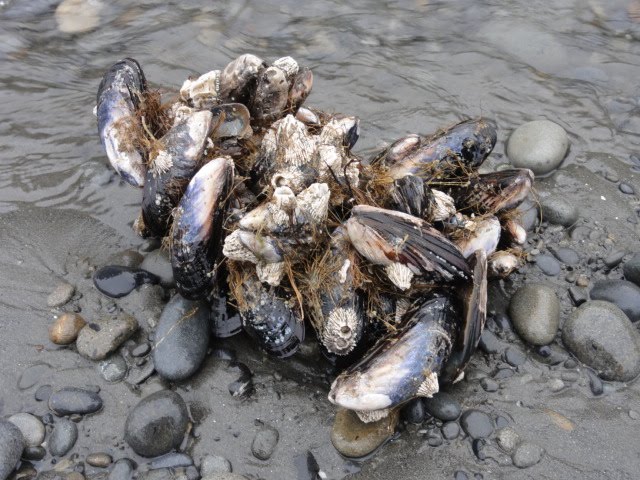 And a sentinel of a sea stack watching over all: 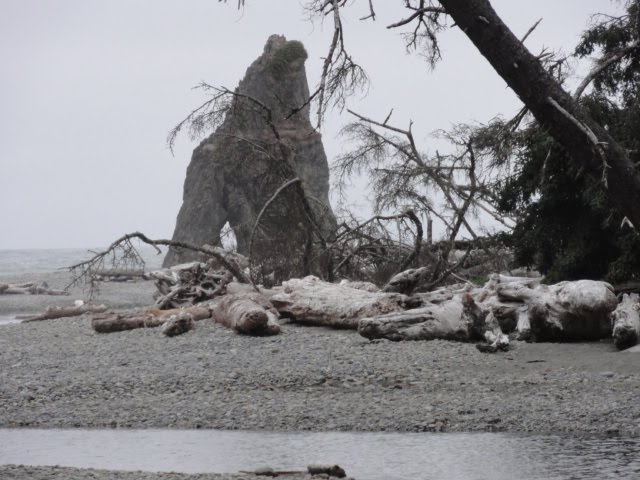 No brilliant sunset colors that day, but they weren't needed.  Not this time.

I'm lucky to live in one of the most changeable, varied, and astonishingly beautiful places in these United States.  Now if only I could get you all out here for a visit...
Posted by Dana Hunter at 2:19 AM

i'm gonna need more than my two days off to see all i wanna see up there...

Nice part of washington state. It's a great place. Here's a photo of the lower dam, the "Elwha Dam". Hope it posts.