The Pleasures of Knowing

I've taken a brief break from geology to sort through photos of flowers.  Yes, you're going to get hit with Northwest flora sometime this winter.  Probably more than one post, actually, because I've got a lot of photos of flowers.

Aside from giving me a warm, flowery feeling, these pictures have reminded me just how far from nature we get sometimes.  It just didn't occur to me that some of the stuff we see sold in the flower stalls at Pike Place Market is actually local, and started its career wild.  I mean, lilies and iris grow wild up here.  This, I can tell you, is astonishing for someone from Arizona.  Never even considered that these things originated in the wild, but now I think on it, they must have done.  Even the most artificial of our offerings at the local florist started somewhere wild, however long ago.

So, I now know that the pretty purple irises and the brilliant yellow lilies I stumble across whilst adventuring aren't escapees from some bugger's flower garden.  Soon, I shall know far more - and when I'm out on a walk, I'll not only be able to identify various flowers, but understand why they're there and what they do.  They'll help me understand the geology I'm looking at - some plants only prefer certain soils, some can only grow in disturbed ground, some have rocky relationships.  Instead of just exclaiming "Ooo, pretty flower!" I'll know right down to the scientific name what I'm cooing over.  And so shall you, should you read me upcoming missive and visit the Northwest.

This has brought me in a roundabout fashion to the pleasures of knowing.  Those who claim ignorance is bliss don't know a damned thing.

It's getting harder and harder to relate to those who remain deliberately ignorant.  The more I know, the more I want to know, and the more I enjoy the world.  Well, the world aside from those fools who revel in their own ignorance, anyway.  There was a time I subscribed to the inane belief that science deconstructed things, reduced everything down to meaningless component parts and took the mystery out of life.  Well, back when I wanted elves to exist, I suppose that was true.  Science is murder on belief in elves, fairies, and those sorts of things.  But that wasn't really the main problem.

Science the way it's taught in far too many schools saps the life out of everything.  They feed us rote fact and formula and pretend that's science.  And some of us take their word for it.  Some of us had decent schools, but were unfortunate enough to grow up with churches and religious sorts babbling inanity at us and calling it truth, all the while dismissing science as cold and mechanical and in no way spiritual.  Some of us got screwed from both sides.  We end up with a bad taste in our mouths.  (To be fair, they did the same thing with Shakespeare, too.)

That's really too bad, because none of it's true.  Science isn't cold and impersonal and dry and dull.  It doesn't suck the mystery out of life.  Knowing how something works doesn't make it boring.  Quite the contrary.  Things seem far more fascinating to me since I started studying science.  Nothing seems like it's been torn down.  Oh, well, maybe temporarily, while we reduce big bits to easier-to-understand-bits, but we don't leave the pieces lying around after.  We put it all back together, and with this new understanding, it becomes far more fascinating than it was before.  The truth is more complicated, stranger, more wonderful than anything our paltry imaginations could come up with.

Astronomy's an obvious example.  I'm reading a book on tides just now, and the fellow who wrote it laments the fact that astronomy has revealed the stars to be nothing more than giant balls of gas burning away in outer space.  He pines for the days when people thought the dark sky was a solid cover around the world, and stars the light of heaven shining through little pinpricks.

The gentleman may know how tides work, but he obviously doesn't know jack diddly shit about how stars do, or he wouldn't be pining for the old light-o-heaven days.  I feel perhaps I should sit down with him, bust out a book of photos from Hubble, and start discussing the fact that we are made of star stuff.  There is absolutely nothing boring about balls of gas burning away in outer space.  Heaven is ho-hum compared to that.

Then, perhaps, I shall take him out digging in the dirt.  Just ordinary dirt.  Ordinary, that is, until you realize that every handful of soil is a thriving community of bacteria and fungi, microscopic (and maybe not-so-microscopic, depending on the handful) arthropods and nematode worms, without which all those lovely large plants we make such a fuss over would not exist.  That's not even mentioning the minerals, other organic matter, and so forth.

There are more things in a gallon of seawater than are dreamt of in his philosophy.

The more I know, the less I take for granted.  Oh, it's a humbling experience, and some people hate being humble, but if a person needs to strut, can't they at least take pride in the fact that we can comprehend this shit?  Seriously.  When I look at the fact that we can trace, from physics through chemistry on to geology and biology, with plenty of other ologies along the way, how an animal works, it astonishes me.  That's one hell of an accomplishment, that is.  We deserve a pat on the back for it.  And then it's time to show some humility in the face of the complexity of even very simple things.  We don't yet understand the interrelationships between geology, ecology and biology in minute detail, although we're getting better about comprehending some of the details.  Thing is, it makes me appreciate even the least of creatures when I realize that the little nobodies of the animal kingdom, the dullest of dirt, play starring roles in nature's show.  Even the mosquitoes that tormented me up on Hurricane Hill bothered me less - I know they're evil little disease vectors and cause no end of itchy misery even when they're not carrying something potentially lethal, but they're also feeding a lot of the wildlife I love so much.  Besides, through the miracle of modern science, they likely won't kill me, so I can live with them.  And they have a bizarre beauty of their own.

I was sitting on some steps at the visitor's center, and saw a flying ant.  Before I started studying biology, before I started really looking at such things, I would've freaked out.  "Ew, stinging flying insect getitaway!" squish once would have been my response.  Instead, I brought my camera to bear: 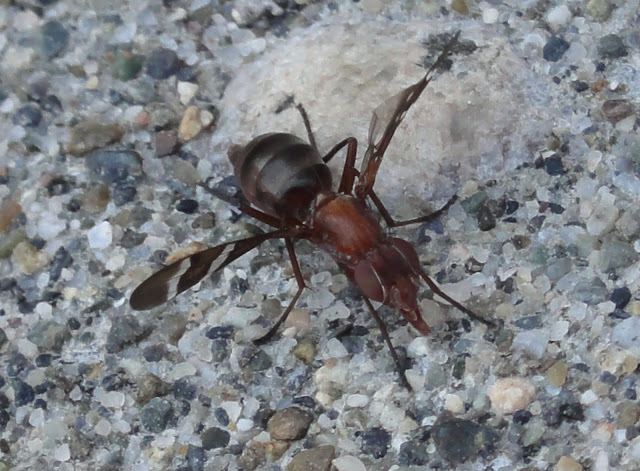 Look at how lovely he is!  Or possibly she.  I'm not even sure what it is, but someday I'll know.  I might even learn why its wings have such pretty stripes, and why it's that rich mahogany color.  For now, it's enough to know that it's an arthropod, one of the most successful species on earth; that its compound eyes see the world in a much different way from ours; and that it's a fellow creature with a place and a purpose in the local ecology.  We got on famously.  It posed for a bit, then wandered off into the tall grass without bothering me in the least.  And because of science, I saw beauty in the world I never would have suspected existed.

This little critter evolved, and has a story to tell.  So does every other critter, and the plants the critters live in, and the rocks they land on, and the dirt everything's buried in.  And you want to tell me science sucks the wonder out of life?  Seriously?  The "Lord God made 'em all" crowd's the one I usually see giving the minuscule short shrift.  And I begin to understand why some Buddhists and Jains are so careful of insects, although I doubt they appreciate them on the critters' own terms.  I've found that science removes the need for me to anthropormorphize things in order to appreciate them.  I can like them just fine for what they are, without ever ascribing human wants, needs and emotions to them.  Seeing the world through compound eyes - you want to tell me that's not wonderful?

"God did it" is a horribly dull, boring explanation for all the incredible things around us.  Even if you believe in God, just leaving it there seems like an insult.  Because without knowing how it works and how it's done, there's so much less to appreciate, y'see.  Take people who can't watch Nascar because they find it deadly dull.  I grew up with a man who used to race go-carts with A.J. Foyt.  Watching cars run rings around a track never got boring for us, because my dad knew what the drivers were doing, and could point out the techniques.  "See how that car snuck in behind the other?  He's drafting.  Notice that little twitch toward the inside lane - somebody's getting ready to shake things up."  Fuel consumption, air flow, engineering both for safety and performance, the way the tires respond to the macadam and how different weather conditions can change the entire outcome of the contest - all of these things I knew, and it made the races far more than an exercise in waiting for the next big crash.

Science, like watching Nascar with a former racer and engineer, turns the world interesting.  It makes life much more than an exercise in waiting for something more interesting to happen.

The world without science is an impoverished place.  It's just a shame so many folks don't realize they're living in poverty.
Posted by Dana Hunter at 2:57 AM

Once you make science not seem a set of cold facts its endlessly interesting. In particular the controversies revolving around the scientific revolutions of the past, such as the Copernican, the Darwinian and the Earth Science revolution of the 1960-1980.
But then of course I have a MS in Geophysics and a BS in Physics. Plus spent a career in computers.

Actually I could run on for pages about the history of geology and the controversies that arose in the past. Anyone want to argue if the earth was formed exclusively by water or fire as happened in the late 18th century.

Science is storytelling. In my own field, geology, it's rocks and landforms (and gravimetric data and seismic data and various other forms of probing at the earth) that tell stories about the past and suggest the future of the rocks and the land. A geologist's job is to interpret what the rocks and other data are saying and write the story in a way that humans can understand and use. Often, that story can be used as a springboard to ask further questions, collect more data, and tell more stories. So science continues.