One of our cantina regulars, Karen, is working on her thesis.  I've never had to do one, but from what I've heard, it's pretty much like that time I had major papers due for Western Civilization II & III and Islamic Civ, all on the same day.  To get the true flavor of a thesis, I've imagined combining all those into one enormous paper, added a career-making-or-breaking proposal to be pitched to unforgiving corporate overlords who have it in for you, and thrown in the MCAT for good measure.

Hopefully, it's not as bad as all that.  But I can't imagine it's easy.  And I haven't provided her many pretty pitchoors lately.  So, from last year's road trip, here's a couple of shots of lovely strata: 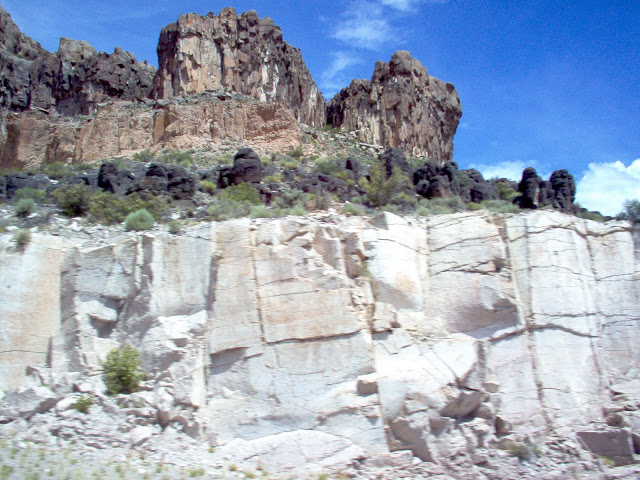 If I'm reading the geological map right, what we're looking at is andesite capping rhyolite tuff, both laid down during the early Oligocene to early Miocene.  As to what formation that might be, well, I spent absolute hours interrogating Google and couldn't get an answer.  There's a reason I never became a cop.  Silver Fox, who is not only a damned good geologist but someone who knows Nevada intimately, might be able to tell us.

You don't want to know what I went through to tentatively identify these rocks, but I'll tell you all anyway: first, I had to wrack my piss-poor memory for some idea as to where we were when I shot this photo from the car window.  Then I had to get it wrong by several hundred miles.  Then I realized that two shots before, we'd been at the Extraterrestrial Highway.  So I was able to determine from the timestamp where we might have gotten to.  Et voila!  Google Street View to the rescue:

Huzzah!  Coordinates!  From there, a simple matter of matching them up to the map.  And now I haz the resources necessary to do a little bit o' yammering on our trip through the Basin and Range at a later date.  Woot!

Here's another awesome shot, taken near on Highway 93 near Las Vegas by my intrepid companion: 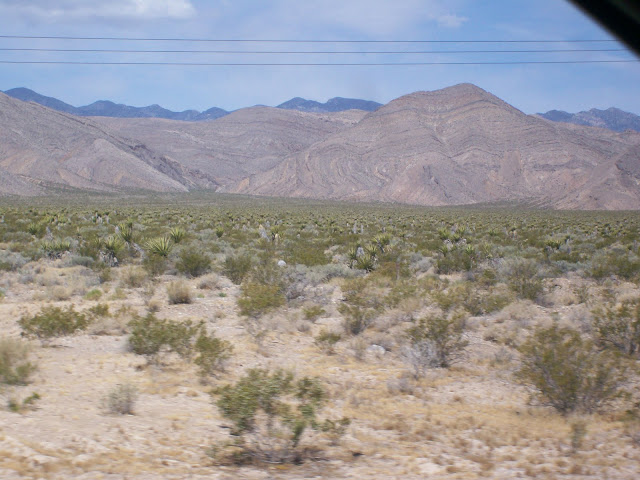 It's just possible that those magnificent mountains are part of the Arrow Canyon Range, which include lovely layers of Mississippian to Early Permian limestones, dolomite, siltstones and sandstones.  What I love about this shot is how well it shows the contortion of the formerly-horizontal rocks.  Someday, I shall know very much more about Basin and Range folding, faulting, stretching and general shenanigans, and I shall share that with you.  Of course, you might want to give that a miss and just go brush up at Silver Fox's site instead, which would probably be the wiser thing to do.

Of course, we'd have to take a field trip to find out for sure!

If you get a chance go to Hells Canyon upriver from the Dam and look below the columbia river basalts and you will see lots of chevron folds on small scales as the results of an island arc being overridden in the collision in E Oregon a long time ago. There and the second picture, are what I call unscientifically rocks that have been sat upon.