Yes, summer illness has reduced me to watching "Destroyed in Seconds."  In my defense, I'm watching it whilst also reading various science-bloggers.  My brain may be flagging, but it ain't dead yet.

Anyway, so I'm sort of half-arsed watching this program, and I see a grain silo tilting like so:

(No, I know that's not a grain silo, it's the Leaning Tower of Pisa.  Tell yourself, "It's just an illustration of a concept.  I should really just relax.")

Right, then.  So, a genius in a Bobcat

decides he's going to push it all the way over.  He's shoving in the direction it's leaning.  What could be easier, right?  It'll just topple right over. 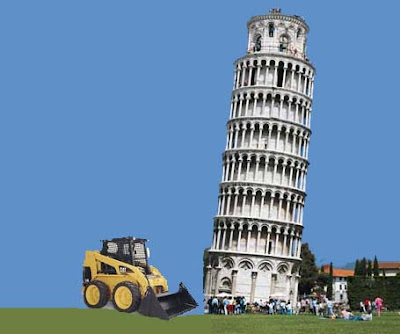 If itty-bitty Bob pushes against the base of the great big leaning cylindrical thingy, will the tower a) keep falling in the direction it's leaning, b) bonk Bob, or c) vanish into another dimension? 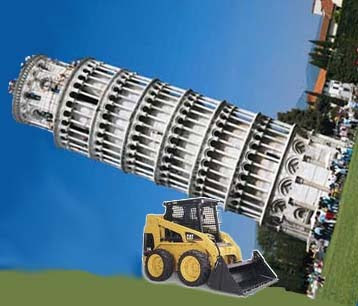 Now, I'm sure there are equations that govern why, precisely, a tower will fall on top of you if you knock out its support, even if it was leaning the other way.  I don't know 'em.  But I know enough about physics to know that if you're very, very short, you'd best not undermine the bits holding up a tower and expect it to fall in the opposite direction.

And you don't even have to take physics to understand this.  Hasn't Bob ever watched a teevee show about logging?

This, my darlings, is yet another reason why even average Bobs should be taught basic science in school.  And if they start whining about its inapplicability to their own lives, well, the teacher could play an episode or two of "Destroyed in Seconds" to demonstrate why everyone needs to learn this stuff.  At least enough of it so that they will not end up wearing grain silos on their heads.

I would appreciate it, too, if they would teach elementary PhotoShop, because as you can see, my skills in this department are minimal at best.